• There is a ‘cool off time’ of 15 minutes in addition to the writing time.
• Use the ‘cool off time’ to get familiar with questions and to plan your answers.
• Read the instructions carefully.
• Read questions carefully before answering.
• Calculations, figures and graphs should be shown in the answer sheet itself.
• Malayalam version of the questions is also provied.
• Give equations wherever necessary.
• Electronic devices except non programmable calculators are not allowed in the Examination Hall.

Answer all questions from question numbers 1 to 7. Each carry one score.

Question 1:
Give the equation showing relation between empirical formula and molecular formula of a compound.

Question 2:
Which of the following transition of electron in the hydrogen atom will emit maximum energy ?
i. n5 → n4
ii. n4 → n3
iii. n3 → n2
iv. same in all transition 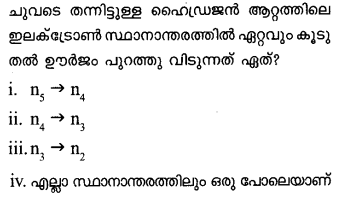 Question 5:
The compressibility factor of an ideal gas is …………

Question 6:
What is the molecular formula of Buck ministers fullerene ?

Question 7:
Ozone layer depletion in Antarctica is due to the formation of the compound
i. acrolein
ii. formaldehyde
iii. SO2 and SO3
iv. chlorine nitrate

Answer any ten from question numbers 8 to 20. Each carries two scores.

Question 8:
In the two oxides of carbon, the mass ratio of oxygen is 1.33 : 2.66. Identify the law illustrated by the above ratio and state the law. 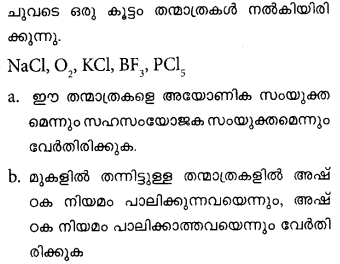 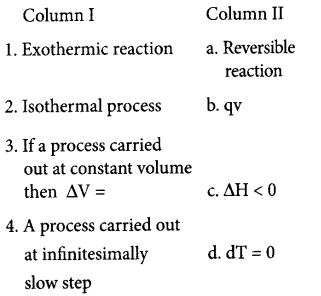 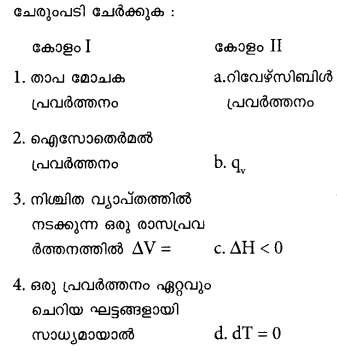 Question 13:
Derive the relation between Kp and Kc of a gaseous reversible reaction.

Question 14:
a. What is Buffer solution ?
b. How a basic buffer can be prepared ? 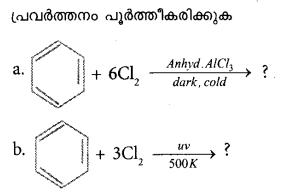 Question 20:
Give any two importance of green chemistry in day-to-day life.

Answer any seven from question numbers 21 to 29. Each carries three scores.

Question 22:
a. Identify the position of the elements in the periodic table having outer electronic configuration.
i. ns2np4 with n = 3
ii. (n-1)d2 ns2 with n=4.
b. “Removal of electron from an atom become easier on moving down the group.” Give reason. 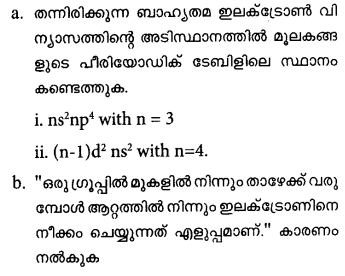 Question 23:
a. Write the two postulates of Kinetic molecular theory of gases responsible for deviation of real gases from ideal behaviour.
b. What is Boyle point ?

Question 24:
a. Derive the equaion for Gibbs energy change (∆G ) in terms of ∆H and ∆S.
b. Write any two condition for which G becomes negative according to Gibbs equation. 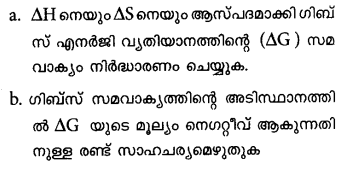 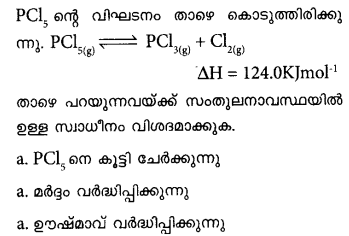 ∆H = 124.0KJmol-1
Describe the effect of the following on the above equilibrium ?
a. addition of PCl5
b. increase in pressure.
c. increase in temperature

Question 26:
Explain the following reactions.
a. CO is heated with ZnO
b. Boric acid is added to water
c. BF3 with NaH. 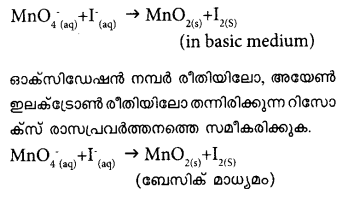 Question 29:
Analyze the given compound.
C2H5C(CH3) = C(CH3)C2H5
a. Write the IUPAC name of the compound.
b. Draw the structures of the geometrical isomers possible for the compound.

Answer any three from question numbers 30 to 33. Each carries four scores.

Question 30:
a. Write the Schrodinger wave equation and explain the terms.
b. Draw the boundary surface diagrams of any four 3d orbitals.

Question 31:
Compare the relative stability of the following species and indicate their magnetic properties based on molecular orbital theory.
O2– and O2+ 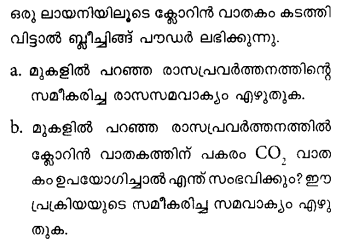 Question 33:
Which of the following carbocation is most stable ?
(CH3)3C+, (CH3)2CH+, CH3CH2CH2+
Justify your answer
b. Write the principle involved in the distillation of organic compound under reduced pressure ? Give an example. 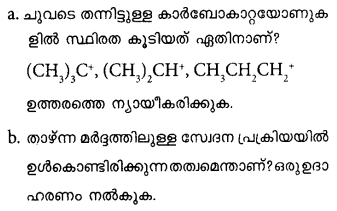 Answer 5:
The deviation from ideal behaviour is measured in terms of compressibility factor Z, which is the ratio of product PV and nRT.

Answer 8:
Law of Multiple Proortions
According to this law, if two elements can combine to form more than one compound the masses of one element that combine with a fixed mass of the other element are in the ratio of small whole numbers. 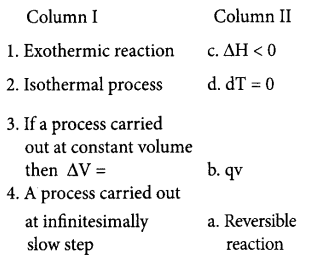 Answer 14:
a. The solutions which resist change in pH on dilution or with the addition of small amounts of acid or alkali are called Buffer Solutions.
b. Basic buffer : Buffer mixture of a weak base and its salt with a strong acid,
e.g., NH4OH and NH4Cl (pH = 9.25)

On heating with con.H2SO4, Fe2+ oxidised to Fe3+ to give prussion blue in colour.

Detection of Phosphorus:
The compound is heated with oxidising reagent (Sodium peroxide). The phosphorous present in the compound is oxidised to phosphate. The solution is boiled with nitric acid and then treated with ammonium molybdate. A yellow colouration or precipitate indicates the presence of phosphorus. Answer 17:
There is deviation from ideal behaviour at high pressure and low temperaure. This is due to two faulty assumptions in kinetic theory of gases. It is corrected by van der Waal’s equation.

where n is the number of moles of the gas a and b are van der Waal’s constants. 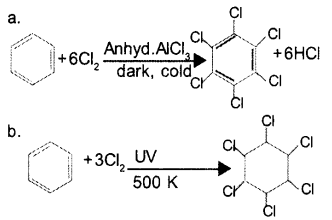 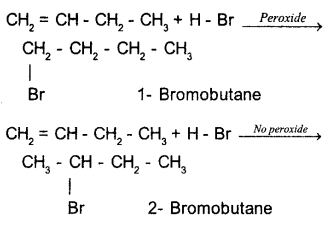 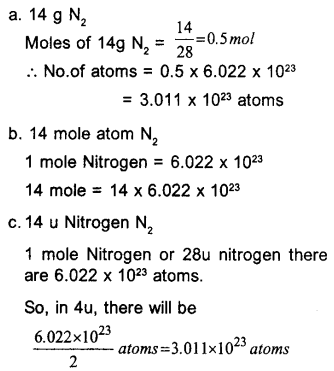 Answer 23:
a. Maxwell, Boltzmann and others put forward a theoretical model of the gas. The theory is known as kinetic molecular theory of gases or microcopic model of gases.

Postulates of kinetic molecular theory are:
• All gases are made up of a large number of extremely small particles called molecules.
• The molecules are separated from one another by large distances so that the actual volume of the molecules is negligible as compared to the total volume of gas.
• The molecules are in a state of continuous rapid motion in all directions. During their motion, they keep on colliding with one another and also with the walls of the container.

b. The temperature at which a real gas obeys ideal gas law over an appreciable range of pressure is called Boyle temperature or Boyle point.

Answer 24:
a. Neither decrease in enthalpy nor increase in entropy alone can determine the direction of spontaneous hange for these systems. For this purposes, we define a new thermodynamic function the Gibbs energy or Gibbs function, G as
G = H – TS
The change in Gibbs energy for the system
∆Gsys = ∆Hsys – T∆Ssys – Ssys ∆T
At constant temperature, ∆T = 0
∆Gsys = ∆Hsys

Usually the subscript ‘ system’ is dropped and we simply write this equation as
∆G = ∆H – T∆S
Gibbs energy change = enthalpy change – temperature x entropy change.
It is reffered to as the Gibbs equation.
b. 1. ∆G is always -ve for a spontaneous process.
2. ∆G became negative for a reactions which are spontaneous only at a low temperature.

b. When boric acid is added to water, it accepts electrons from -OH ion. Boric acid is sparingly soluble in cold water i however fairly soluble in hot water, boric acid behaves as a weak monobasic acid. It doesn’t act as proton donor, beh- 0 aves as a lewis acid, it accepts a pair of electrons.
B(OH)3 + 2HOH → [B(OH)4]– + H3O+
450 A:
c. 2BF3 + 6 NaH \(\underrightarrow { 450K }\) B2H6 + 6 NaF
Diborane is produced on an industrial scale by the reaction of BF3 with sodium hydride. 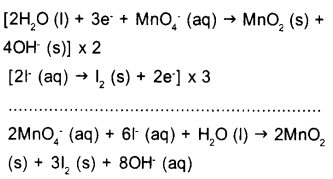 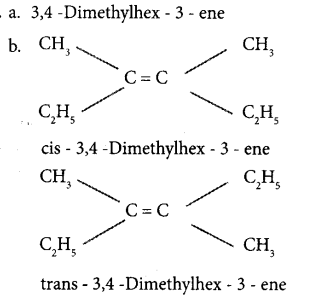 Answer 30:
a. Erwin Schrodinger developed an atomic model taking into account both the wave and particle nature of elecron. This equation is known as shrodinger wave equation. For a system the schrodinger equation is written as
H\(\Psi\) = E\(\Psi\), where h is a mathematical operatior called Hamiltonian. Schrodinger gave a recipe of constructing this operator from the expression for the total energy of the system. The total energy of the system takes into accountthe kinetic energiesofallthe subatomic particles attractive potential bet-ween the electrons and nuclei and repuisive potential among the electrons and nuclei individually. Solution of this equation gives E and \(\Psi\). 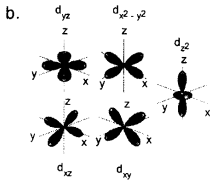 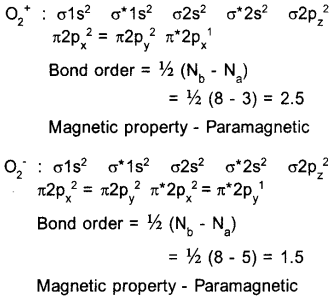 Carbocations are classified as primary, secondary or tertiary. Its stability follows the order 3° > 2° > 1° due to inductive effect and hyperconjugation.
b. This method is used to purify liquids having very high boiling points and those, which decompose at or below their boiling points. Such liquids are made to boil at a temperature lower than their normal boiling points by reducing the pressure on their surface. The pressure is reduced with the help of a water pump or vacuum pump.