Kerala Plus One Chemistry Improvement Question Paper Say 2017 with Answers

Question 4.
Arrange the following elements in the increasing order of first ionisation energy: Li, Be, B
Answer:
Li < B < Be

Question 5.
The compressibility factor of an ideal gas is …………
Answer:
1

Question 6.
What is the molecular formula of Buck ministers fullerene?
Answer:
C60

Question 8.
In the two oxides of carbon, the mass ratio of oxygen is 1.33 : 2.66. Identify the law illustrated by the above ratio and state the law.
Answer:
Law of Multiple Proportions.
The law states that if two elements can combine to form more than one compound, the masses of one element that combine with a fixed mass of the other element, are in the ratio of small whole numbers.

Answer:
1) Exothermic reaction – c) ΔH < 0
2) Isothermal process – d) dT = 0
3) If a process is carried out at constant volume then ΔU = – b) qv
4) A process carried out in infinitesimally slow steps – a) Reversible reaction 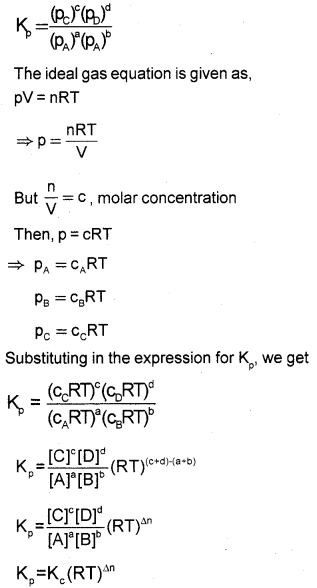 Question 14.
a) What is Buffer solution?
b) Flow a basic buffer can be prepared?
Answer:
a) The solutions which resist change in pH on dilution or with the addition of small amounts of acid or alkali are called Buffer solutions.
b) A basic buffer can be prepared from weak bases and their salts with strong acids. For example, a mixture of NH4OH and NH4Cl acts as a buffer around a pH 9.25.

Question 15.
Briefly explain the bonding in diborane.
Answer:
In diborane the four terminal hydrogen atoms and the two boron atoms lie in one plane. Above and below this plane, there are two bridging hydrogen atoms. Each boron atom uses sp3 hybrid orbitals for bonding. Out of the four sp3 hybrid orbitals on each boron atom, one is without an electron. The four terminal B-H bonds are regular two centre-two-electron bonds while the two bridge (B-H-B) bonds are three centre-two electron bonds also referred to as banana bonds.

Question 16.
Nitrogen, sulphur, halogen and phosphorous present in an organic compound are detected by Lassaigne’s test. Explain Lassaigne’s test for detecting nitrogen?
Answer:
The given organic compound is fused with metallic sodium in a fusion tube and the fused mass is extracted by boiling with distilled water to get sodium fusion extract. This is boiled with iron(II) sulphate and then acidified with conc.H2SO4. Then NaCN present in the extract first reacts with iron(II) sulphate and forms sodium hexacyanoferrate(II). On heating with conc.H2SO4 some iron(II) ions are oxidised to iron(III) ions which react with sodium hexacyanoferrate(II) to produce iron (III) hexacyanoferrate(II) which is Prussian blue in colour. The formation of Prussian blue colour confirms the presence of nitrogen in the organic compound.

Question 17.
Write Van der Waals equation for one mole gas and also write the physical significance of Van der Waals constants.
Answer:
The van der Waals’ equation for one mole of a real gas is given by
\(\left(p+\frac{a}{V^{2}}\right)(V-b)=R T\)
p = pressure
V = volume of the gas
R = universal gas constant
T = temperature in kelvin
a & b = van der Waals’ constants the value of which depend on the characteristic of a gas.
Significance of ‘a’: It is a measure of magnitude of intermolecular attractive forces within the gas and is independent of temperature and pressure. Larger the value of ‘a’, larger will be the intermolecular attraction among the gas molecules. 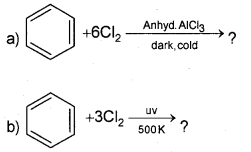 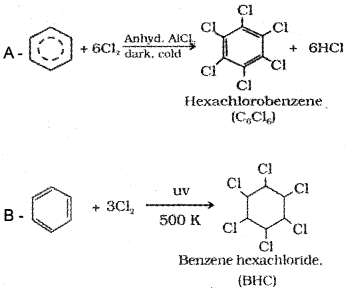 Question 20.
Give any two importance of green chemistry in day-to-day life.
Answer:
1. Dry cleaning of clothes – The process in dry cleaning using the carsinogenic solvent tetrachloroethene is replaced by a process, whereliquified CO2. with a suitable detergent is used which result in less harm to ground water.
2. H2O2 is used for the purpose of bleaching clothes in the process of laundary, which gives better results and makes use of lesser amount of water.
3. Bleaching of paper – Instead of chlorine gas, H2O2 with a suitable catalyst is used.
4. Synthesis of chemicals – Ethanal is commercially prepared by one step oxidation of ethene in the presence of ionic catalyst in aqueous medium with an yield of 90%. 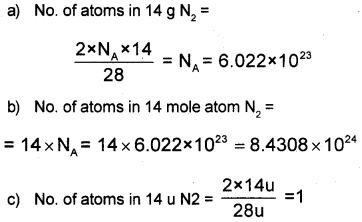 b) On moving down a group in the periodic table the effective nuclear charge experienced by a valence electron in an atom will be less than the actual charge on the nucleus because of shielding or screening of the valence electron from the nucleus by the intervening core electrons. The increase in shielding outweighs the increasing nuclear charge and the removal of the outermost electron requires less energy down a group.

Question 23.
a) Write the two postulates of Kinetic molecular theory of gases responsible for deviation of real gases from ideal behaviour.
b) What is Boyle point?
Answer:
a) i) Gases consist of large number of identical particles that are so small and so far apart on the average that the actual volume of the molecules is negligible in comparison to the empty space between them.
ii) There is no force of attraction between the particles of a gas at ordinary temperature and pressure.
b) Boyle point of a gas is the temperature at which a real gas obeys ideal gas law over an appreciable range of pressure.

Question 25.
Decomposition of PCI5 can be represented as 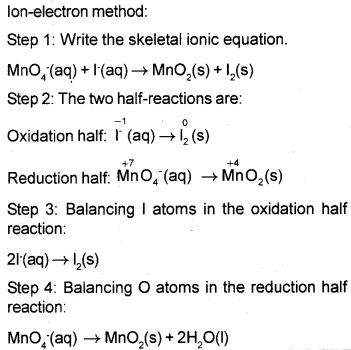 Question 29.
Analyse the given compound.
C2H5C(CH3) = C(CH3)C2H5
a) Write the IUPAC name of the compound.
b) Draw the structures of the geometrical isomers possible for the compound.
Answer:
a) 3, 4-Dimethylhex-3-ene
b)

Question 30.
a) Write the Schrodinger wave equation and explain the terms.
b) Draw the boundary surface diagrams of any four 3d orbitals.
Answer:
a) For a system such as an atom or a molecule whose energy does not change with time the Schrodinger equation is written as
\(\hat{\mathrm{H}}\)Ψ = EΨ
where
\(\hat{\mathrm{H}}\) is a mathematical operator called Hamiltonian
E = total energy of the system which takes into account the kinetic energies of all the sub-atomic particles, attractive potential between the electrons and nuclei and repulsive potential among the electrons and nuclei individually Ψ is the amplitude of the electron wave called the wave function. 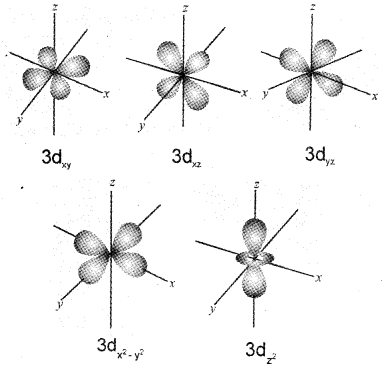 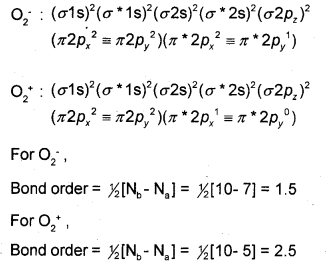 Question 32.
By passing Cl2 gas through a solution, gets bleaching powder
a) Write the balanced chemical equation for above reaction.
b) What happens if CO2 gas is passed instead of Cl2 and write the balanced chemical equation.
Answer:
a) When Cl2 gas is passed through milk of lime, calcium hypochlorite is formed, a constituent of bleaching powder.

b) When CO2 gas is passed through lime water it turns milky due to the formation of calcium carbonate.
Ca(OH)2 + CO2 → CaCO3 + H2O

Question 33.
a) Which of the following carbocation is most stable?
(CH3)3C+,(CH3)2CH+,CH3CH2CH2+
Justify your answer.
b) Write the principle involved in the distillation of organic compound under reduced pressure? Give an example.
Answer:
a) (CH3)3C+ is the most stable among the given carbocations.
Alkyl groups directly attached to the positively charged carbon stabilise the carbocations due to inductive and hyperconjugation effects. Due to the presence of three – CH3 groups directly attached to the positively charged carbon, (CH3)3C+ has maximum +l effect and hyper conjugation which results in maximum dispersal of charge and hence maximum stability.
Thus, stability increases in the order:
CH3CH2CH2+ < (CH3)2CH+ < (CH3)3C+

b) This method is used to purify liquids having very high boiling points and those, which decompose at or below their boiling points. Such liquids are made to boil at a temperature lower than their normal boiling points by reducing their pressure on their surface.
For example, glycerol can be separated from spent-lye in soap industry by using this technique.

Plus One Chemistry Previous Year Question Papers and Answers