Definition of plane and its equations

If point P(x, y, z) moves according to certain rule, then it may lie in a 3-D region on a surface or on a line or it may simply be a point. Whatever we get, as the region of P after applying the rule, is called locus of P. Let us discuss about the plane or curved surface. If Q be any other point on it’s locus and all points of the straight line PQ lie on it, it is a plane. In other words if the straight line PQ, however small and in whatever direction it may be, lies completely on the locus, it is a plane, otherwise any curved surface.

Equation of plane passing through the given point

If AP be the perpendicular from A to the given plane, then it is parallel to the normal, so that its equation is

Equation of planes bisecting angle between two given planes

Image of a point in a plane

Let P and Q be two points and let π be a plane such that
(i) Line PQ is perpendicular to the plane π, and
(ii) Mid-point of PQ lies on the plane π.
Then either of the point is the image of the other in the plane π.
To find the image of a point in a given plane, we proceed as follows
(i) Write the equations of the line passing through P and normal to the given plane as 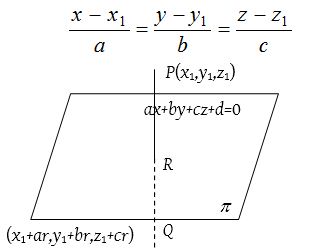 Lines are said to be coplanar if they lie in the same plane or a plane can be made to pass through them.
Condition for the lines to be coplanar: