Photography Vocabulary: Photography refers to the art, application, and practice of generating images that are both permanent and reversible. This is accomplished either via the use of an image sensor or chemically through the use of a photographic film.

Before venturing out into the field, it’s necessary to grasp a few photography terms. Words associated with photography and their meanings will surely help you to prepare before you delve into the realm of photography.

We’ve put up a hand-picked list of various types of cameras just for you.

An optical instrument that captures a visual image is called a camera. Cameras allow light to captures an image that falls on a photographic film through a small hole in their sealed boxes.

Whether it’s black and white photography vocabulary or the more modern phrases associated with color photography, the words are fairly comparable, and knowing them will offer you an advantage over the competition, particularly if you’re a beginner.

While photography is fundamental in the film and fashion industry sectors, it is unquestionable that casual photographers have a genuine passion for the craft. Before you can grasp basic photography methods and techniques, you must first comprehend some of the most commonly used photography terms to describe a photo. 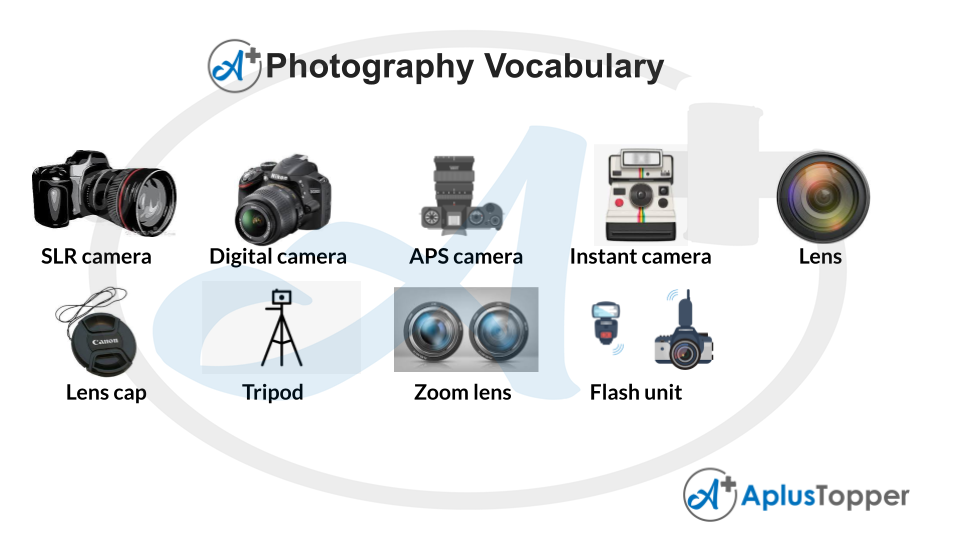 Description of the Photography Vocabulary Words

A camera that uses a mirror and a prism system that permits the photographer to view through the lens is a single-lens reflex camera or an SLR camera.

A camera that captures photos in digital memory is known as a digital camera. These cameras have an optical system that uses a lens with a variable diaphragm that focuses on an image with the help of light.

These sensors give a better signal to noise ratio, making them an important use in digital cameras used for videography.

A camera that uses a self-developing film to create a developed photo print after taking a picture chemically is called an instant camera. The first company to create instant cameras were Polaroid Corporation; after that, the concept of instant cameras spread worldwide.

The many different models of instant cameras were introduced and developed in the mid to late twentieth century.

It is basically the ratio of two sides of a picture.

The width: height ratio of a photograph indicates the link between its lengths.

Macro photography is an expression used to designate ultra close-up photography, which is used to photograph minuscule creatures or objects. The size of the subject appears on the sensor in these photographs is significantly greater than it is in actual situations.

This is a flaw in an image that commonly occurs when it is compressed too much, ultimately resulting in a deteriorated image quality.

Bokeh is an optical effect that accentuates the visual appeal of dazzling out-of-focus features. A bustling background is altered into a fuzzy, relatively homogeneous palette where light emerges as soft patterns when a fast lens is utilized at its maximum aperture.

The bulb is a photographic setting that maintains the shutter open as long as you touch the shutter release key.

Noise, often known as grain, is essentially minute specks in a visual.

A candid photograph taken is one in which the individual is not posing for the camera. This may be done by capturing a subject that is completely unaware of the photographer’s proximity or by establishing motion and startling the model during a photoshoot.

This style of portrait photography is extremely widespread in street photography and is becoming widely attractive in formal settings such as events like weddings.

FPS means for frames per second and is an indicator of how rapidly a camera can capture images. It’s extremely important for athletic and wildlife photographers, who must be prepared to shoot quickly in order to get suitably timed photographs.

The spectrum of tonal difference between an image’s shadows and backlight brightness is characterized by contrast. As the contrast improves, these differences are highlighted, resulting in enhanced textures and colors.

It is taking a series of photographs with widely varying exposures. When producing HDR photos or in challenging lighting settings when you necessarily require a spectrum of exposures from light to dark, bracketing is commonly utilized.

Depth of Field, or DOF, is the space between the closest and the furthest item inside an image’s focused domain.

The color richness of a picture is simply referred to as saturation. Vibrant colors tend to become more crisp and colorful as their saturation increases.

The degree of light that hits the camera sensor strongly influences the luminance or darkness of a photograph. This positioning of the light is referred to as exposure and strongly determines the overall visual aspect of a picture.

The subject in a backlight photograph is centered between the source of light and the camera body. The end effect is fairly frequently a shadowy figure puppet or a silhouette.

The most concentrated item in a photograph is the sharpest thing. In-camera terminology, focus corresponds to the image’s sharpness. A picture that is out of focus is not clear, and vice versa.

When snapping a picture, shutter speed corresponds to the duration of time a camera sensor is subject to light. Slow shutter rates capture the swirl of moving scenes, making them potentially excellent for night and nature photography.

Rapid shutter speeds, on the other contrary, enable photographers to capture a single instant in time, which is pretty much essential in sports and pet photography.

Blue Hour is the brief stretch of time that falls just after sunset or just preceding sunrise. Even though a blue hour does not continue to persist for an extended period of time, you will be able to capture cooler and softer videos and images at this time when the sky is saturated with tones of azure.

The file format specifies how the image or image file will be saved by your camera lens. Raw files contain more data than JPGs, rendering them more geared to picture processing in a variety of software.

A low-angle shot is just a photograph taken from a downward angle, frequently below the line of vision and gazing up.

The receptivity of your camera’s digital sensor to light is accurately represented by ISO. The lower the value (ISO 200), the less lighting sensitivity; the higher the number (ISO 3200), the more illumination sensitive. You can take a photograph in low-light circumstances with a considerably greater ISO.

The exposure triangle is constituted of aperture, ISO, and shutter speed.

The burst rate is the highest amount of shots a camera can capture in succession. Images are temporarily stored on buffer storage before even being transported to your memory card when you’re using the setting.

Panning is a photographic technique that is not often used by beginners. It means concentrating on a unique moving object. Because the shutter speed is slow, the backdrop appears distorted, giving an aesthetic appeal to the picture.

It’s a methodology for synchronizing the camera picture with real-world events. What you see as white might not be accessible to the camera. White balance is a standard method of modifying the camera’s settings. As a consequence, white in real life looks white in pictures processed by the lens.

Simply stated, the definition is the overall percentage of horizontal and vertical pixels in your image.

A transmissive optical device that disperses and focuses on a light beam through refraction is a lens. The compound lens comprises several simple lenses or elements, usually arranged in a common axis, while single-piece lenses are made of transparent materials.

In bioscopes, cameras and binoculars and other various imaging devices, lenses are used.

A cover or a cap that protects from scratches and dust particles from damaging the lenses is called a lens cap. Most of the camera and lenses nowadays comes with lens caps and some mobile phones contain lens caps.

Units used in photography for giving artificial lighting conditions are called flash units. This light comes at a colour temperature of five hundred and fifty kelvin.

Flash units are given with almost all photographic devices, including handheld cameras to mobile cameras.

A prime lens is a static lens that cannot be zoomed in or out, essentially necessitating you to utilize your feet and hands to zoom lens.

It fundamentally demonstrates that a prime lens’ focal length cannot be altered. Various sorts of prime lenses are essential for multiple types of photography.

They are generally smaller and of the top standard than zoom lenses.

Images created with a fisheye lens have quite a lot of barrel distortion. Also, because the angle of vision is broader in scope than the sensor or film format, the corners are compressed to accommodate.

In the camera systems, the film is safely housed in a compartment in the rear of the camera. This is referred to as the film compartment.