Permission Letter: A permission letter is a formal letter written to the higher authorities to get permission for any particular condition or for any upcoming plans. The reason to ask permission could be anything such as asking leave for holidays, going for a trip, attending a ceremony, etc. Usually, such letters are rotated in the working offices. The employee takes permission from his boss or supervisor for any plan or to attend a situation, where he/she is not available in the office during that period.

A permission letter is also written to the principal of schools or colleges asking permission to take leave or conduct an event. The letter should be written in a polite manner (using may I, could I, shall I).

To give the best ideas on how to write the permission letter we have provided samples and templates in this article. Let us go through them.

How To Write A Permission Letter?

The receiver address is the first thing that is mentioned in the letter. The address should be written in a proper sequence such as the First Name of the receiver, Designation, Organisation name, Street Address and City name with pin code.

Next to the address, the individual has to mention the reason behind writing the permission letter in the Subject. The subject line should have a minimum of 6-7 words. But it should not be too lengthy.

After the subject, the main content has to be written which should be according to the subject line. The individual should not get diverted from the subject. Explain in detail the reason to get permission. The words should be written in a very polite manner.

Now let us check the format of the permission letter.

The format of the permission letter includes the following points:

Below is the general format of a permission letter. 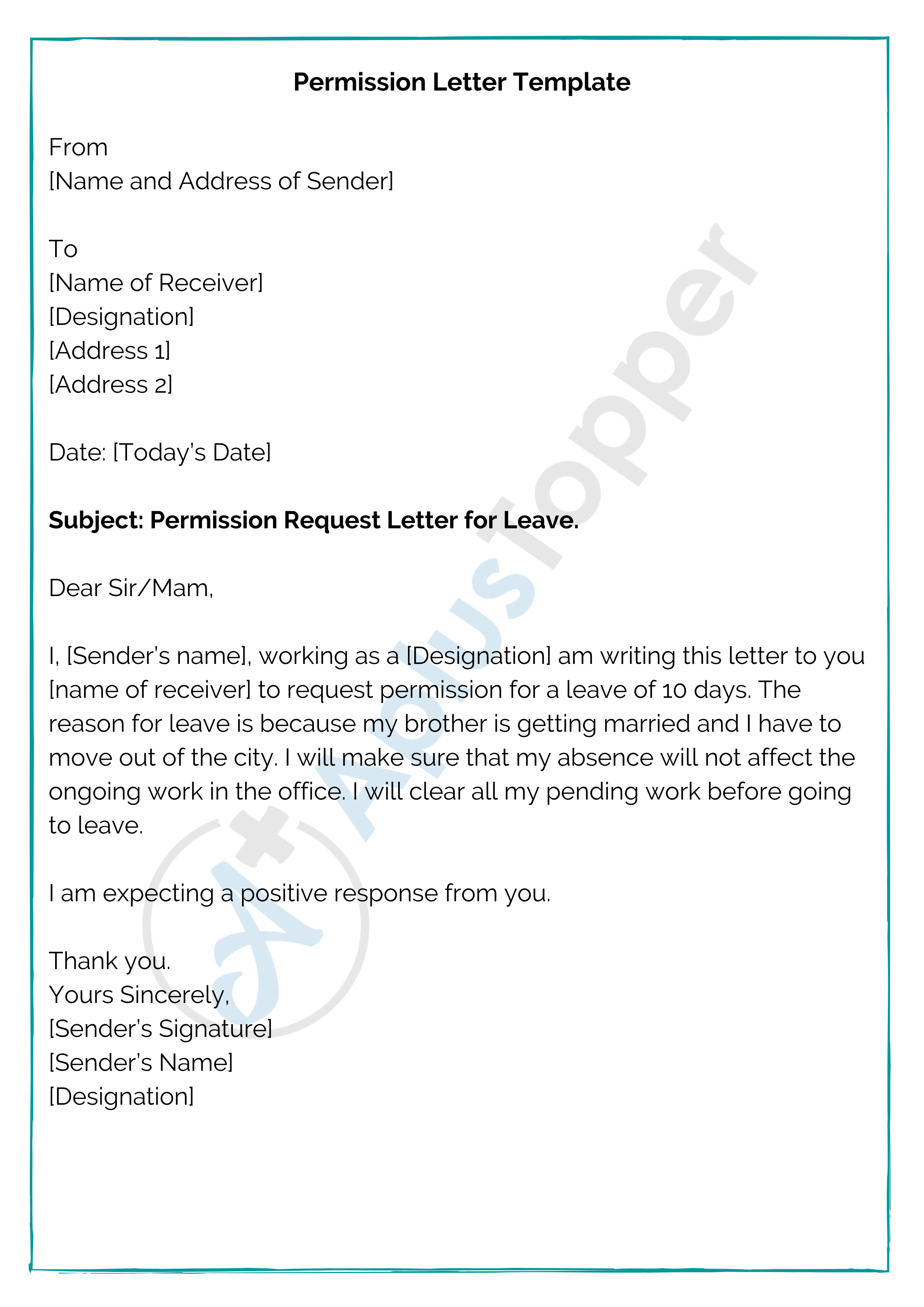 Since, we have already learned how to write the permission letter, how its format should be and what to include in the letter, we can go through some of the sample letters to get a good idea of writing the letter. Permission Letter to Principal from Parents

Sometimes the parents of students in the school write a letter addressing their principal to get permission on behalf of their children. Let us check a sample letter for the same. 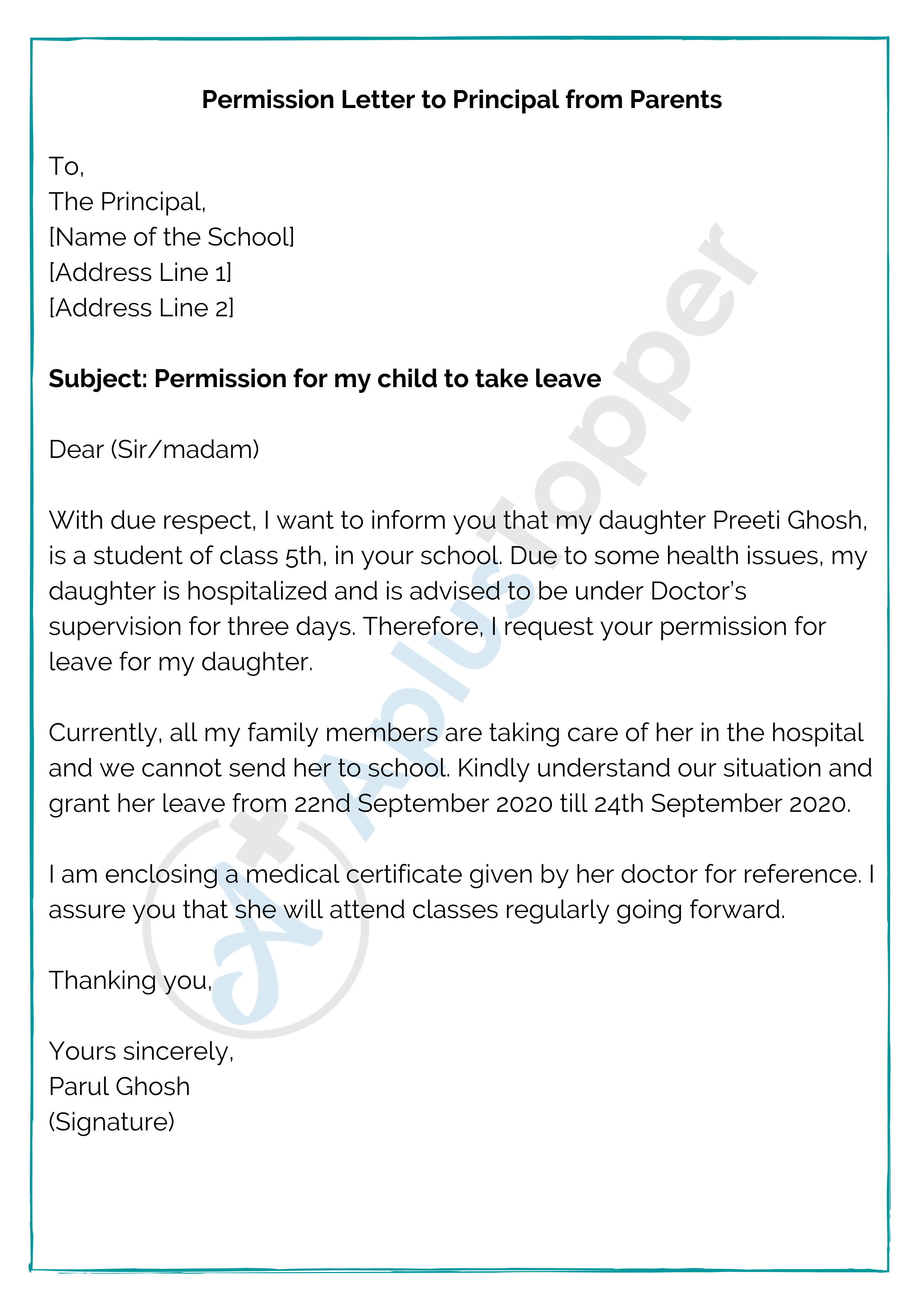 In schools, colleges and offices, there are many events conducted for many purposes, such as annual day, carnivals, product launch, etc. The respective person who is responsible for conducting such events needs to take permission from the school principal, college deans and boss of the office. Therefore, we are presenting here the format of permission letters to conduct an event. 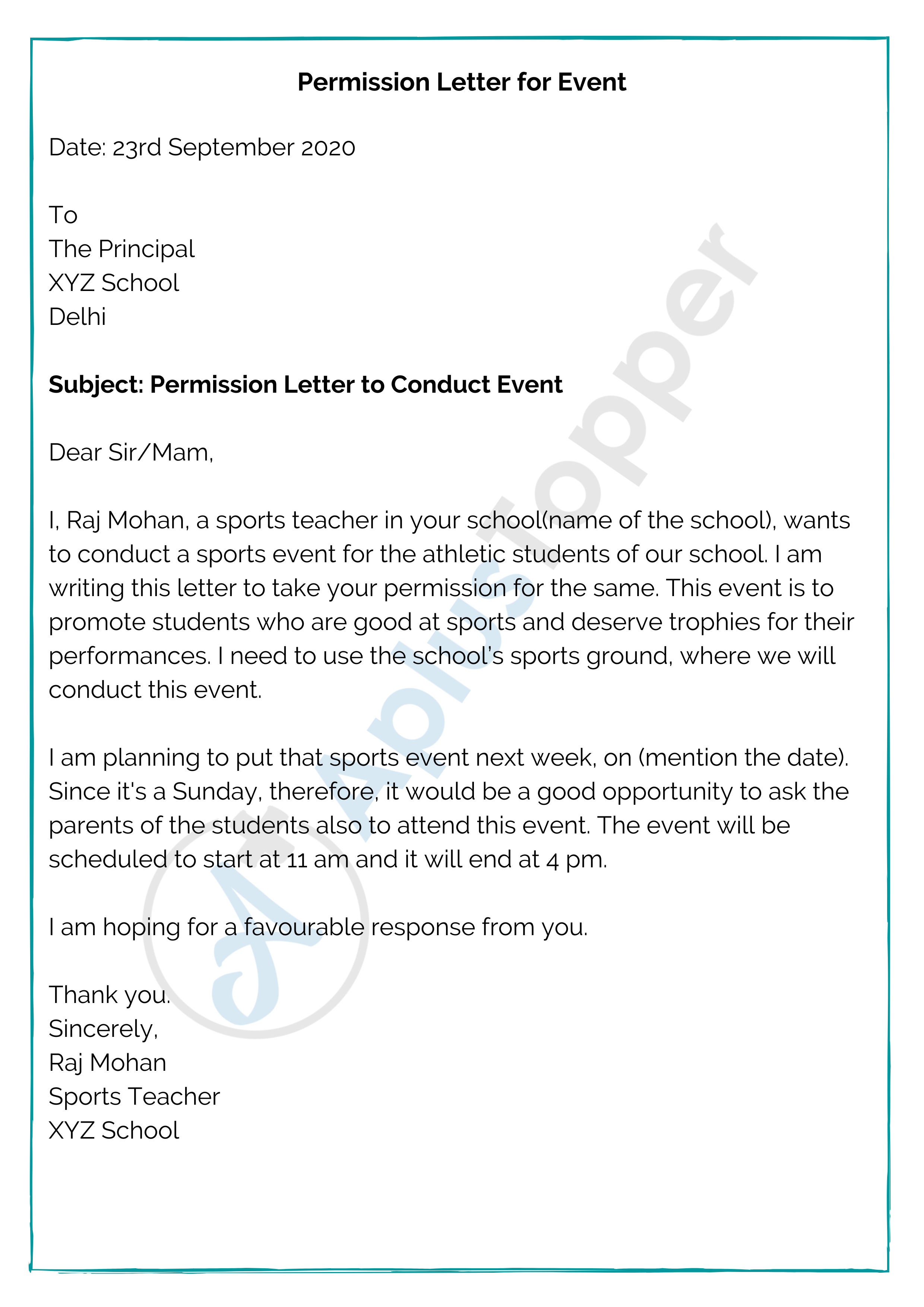 Question 1.
How to write permission letters for travel?

Answer:
Mention the name and address of the receiver properly. Include the subject line stating the permission for travel. Greet the receiver using Sir/Mam. The body of the letter should stick to the subject line and should sound polite. Give a proper reason to travel and the time duration till when you will not be available. Also, make sure in your absence there will be no issues in work. Close the letter with thank you and mention your name and signature at last.

Question 2.
What is a copyright permission request letter?

Answer:
A copyright permission request letter is a permission letter when one firm asks permission for the copyright of certain products or materials from another company. The sender should mention the name and address in detail, including contact details such as phone number, email if, fax number. Also, the receiver’s address should be mentioned exactly. Mention the detail of the product or article which you want to reuse. Also, mention the purpose of reusing it.

Question 3.
How to be polite in a permission letter?

Answer:
To write the permission letter in a polite manner, we can use many words such as “May I”, “Could I”, “Shall I”, etc.

Question 4.
How to get leave permission?

Answer:
Requesting leave from work for a period of time in a proper and polite manner can increase the chances of approval. There are also many other ways by which you can get permission for leave. For example,