Paragraph On Social Media: One of the modern communication sites and social mingling through the virtual medium of the internet is social media. Technology has reduced the distance between people; even if it across the two corners of the planet, individuals can interact still through social media. Social media has now become an important aspect of the human lifestyle.

The modern way of keeping in touch with people we know and being aware of current is through social media. The demand for social media has grown worldwide, and it has brought some significant changes in our lives. Even though the effects of social media are debatable, but one thing that everyone would agree that social media is certainly enjoyable.

People use social media to express themselves and connect with others mostly, and as long as it is used harmlessly, it would not seem toxic. However, social media has increased in people to focus on the temporary, and eventually, this practice might become a permanent change. 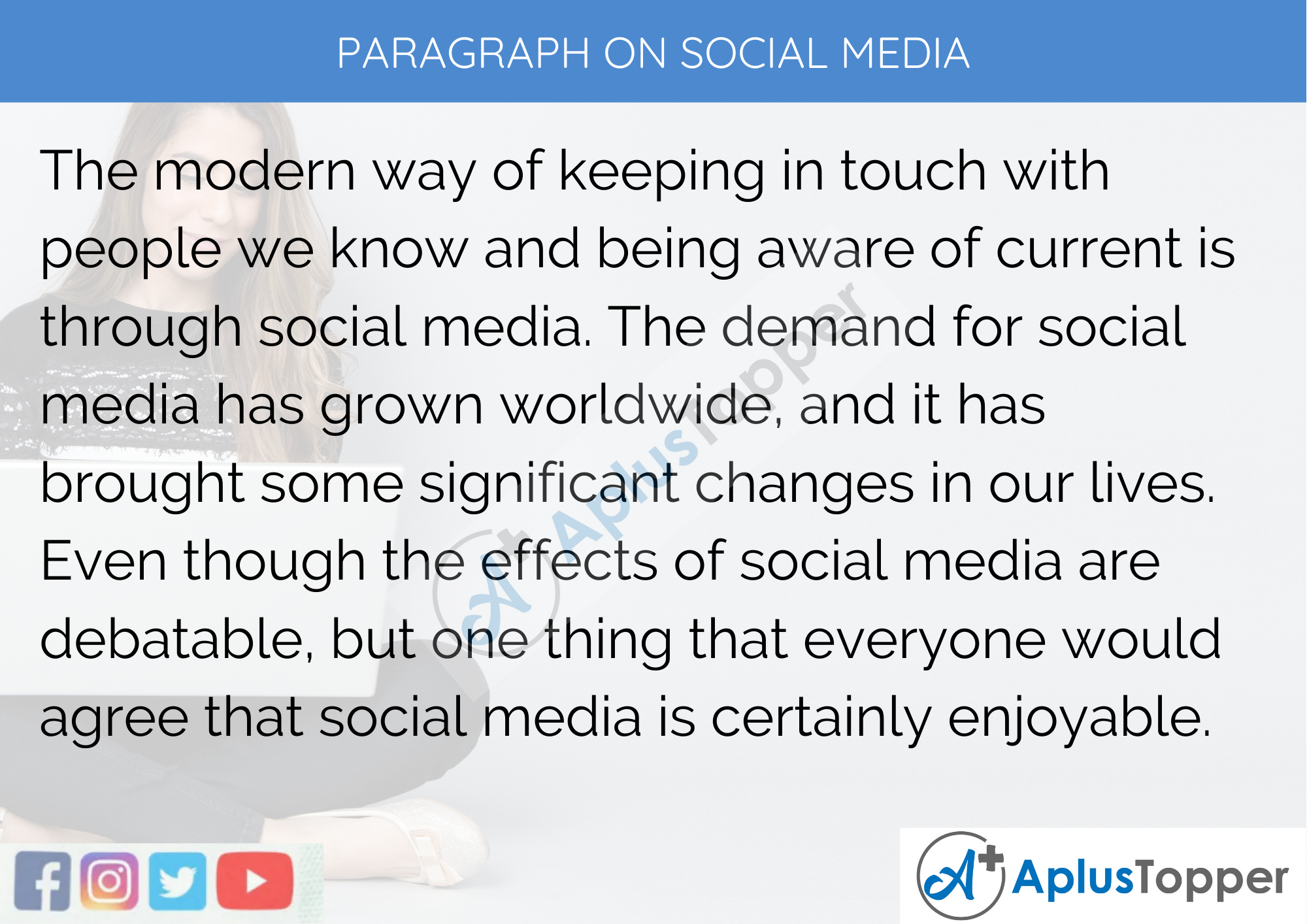 A tool that has become extremely popular among all generations because of its user-friendly interface is social media. The most dominant user crowds of social media are the youth, which is both impressive and a daunting issue at the same time.

Our connections have widened thanks to social media, and almost the entire world is available at our fingertips. But amid all the fleeting but intriguing trends on social media that impact us, we must be careful not to lose our uniqueness.

The massive reach quality of social media is a powerful quality that makes me wonder about times when it is not be used for positive purposes. And it is no news that industries have also realized the power of social media on our lives and have started using it in their favor.

To sum up, social media has both good and bad aspects, which is a debatable topic, just like our opinions. It also gives rise to several online arguments and debates on social media.

One of the biggest revolutions in mass media was the introduction and popularity of social media. And the impact of social media was and is so major that it began a completely new era. Some mentionable social media platforms are Facebook, Twitter, Instagram, Pinterest, Linkedin, Whatsapp, etc.

The horizons of communication have tremendously expanded because of social media. Also, it is because of the advancement of technology that the pace of human life has to speed up. Social media has received users from almost all generations, but the youngsters crowd social media the most. The youth also create new trends to engage in and unify, but those are temporary as compared to trends that dominated in earlier times.

Social media has helped connect people from all corners of Earth and resulted in the formation of a global community. Social media is also a platform where people can freely express themselves and their opinions on several topics, starting from politics to art. Social media has also helped businesses to reach a larger audience and reach out to their customers.

But among all the good aspects of social media, one thing that almost everyone realizes is how addictive it is. Also, people seemed to have grown more emotionally distant because of social media. We must be careful about our activities on social media for our well-being.

A popular and quickly growing knowledge and interaction outlet are social media where people are free to gain information and express their thoughts. Sites like Facebook, Twitter, and Instagram are social media platforms dominant internationally.

In our fast-paced, busy life, social media brings a breadth of relief and enjoyment for a few minutes, which makes us energized to focus on what we were doing afresh. One of the best aspects of social media is that it helps people re-connect who once lost touch, but the only limitation is that both of them must have an account on social media.

Just like truth spreads precisely and fast through social media, so does fake-news and rumors as well. It is our duty as respectable netizens to focus on the truth and stop the spreading of fake content as much as possible by avoiding or revolting.

In the age of social media, people have also gained power over mass communication, which means a greater audience can be reached in a very short time and very fewer efforts. And the development of social media was possible because of the surging communication information.

The boons and banes are debatable when it comes to the matter of social media. But we need to use social media advantageously and avoid toxic means. Social media should be used to create awareness for good purposes like drawing attention to that news which needs justice but does not get enough attention from the public.

Seldom have we realized that social media is an addictive pit, and soon this addiction leads to us mindless either scrolling or posting or involving in dumb conflicts that in no way will benefit us. 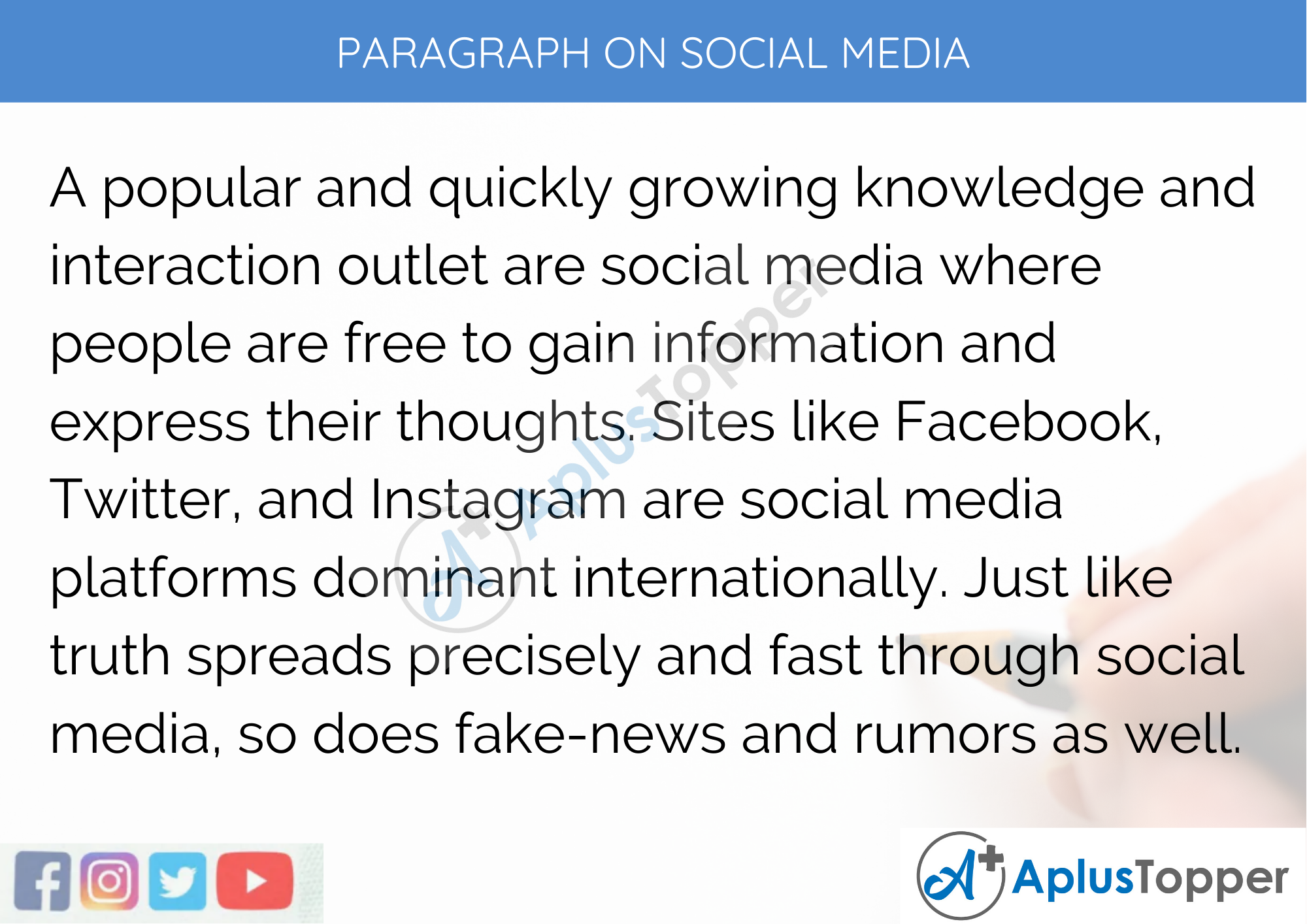 FAQ’s on Paragraph on Social Media

Question 1.
Mention one major negative effect of social media on us.

Answer:
Social media being very addictive, people get obsessive about it. This causes people to be glued to their device screens all day, and therefore many health disorders arise in them like stress, anxiety, depression, and sleeplessness.

Question 2.
What is one good thing that social media provide us with?

Answer:
Social media gives us a great platform for expressing ourselves, which leads to gaining exposure.

Question 3.
How is social media beneficial for us?

Answer:
Social media is highly beneficial for sharing content and communicating in real-time, gaining information, and reference. Social media also provides news and is a great platform for showcasing talent.

Answer:
Crimes like stalking, cyber-bullying, catfishing, scams, and other fraudulent activity has increased because of the negative or wrong use of social media platforms.