Lal Bahadur Shastri has been a person whose personality is impossible to explain in a few words. He can be the best inspiration for many people in India. Especially people who involved in politics might respect him. Now, check out the paragraphs on Lal Bahadur Shastri in this article. You can understand why people respect him.

Lal Bahadur Shastri was much fond of Mahatma Gandhi’s ideologies. He served the nation and never let his truth decline even after India Independence. He was a true follower of ‘Simple Living High Thinking.’ For that, the whole world admired him. 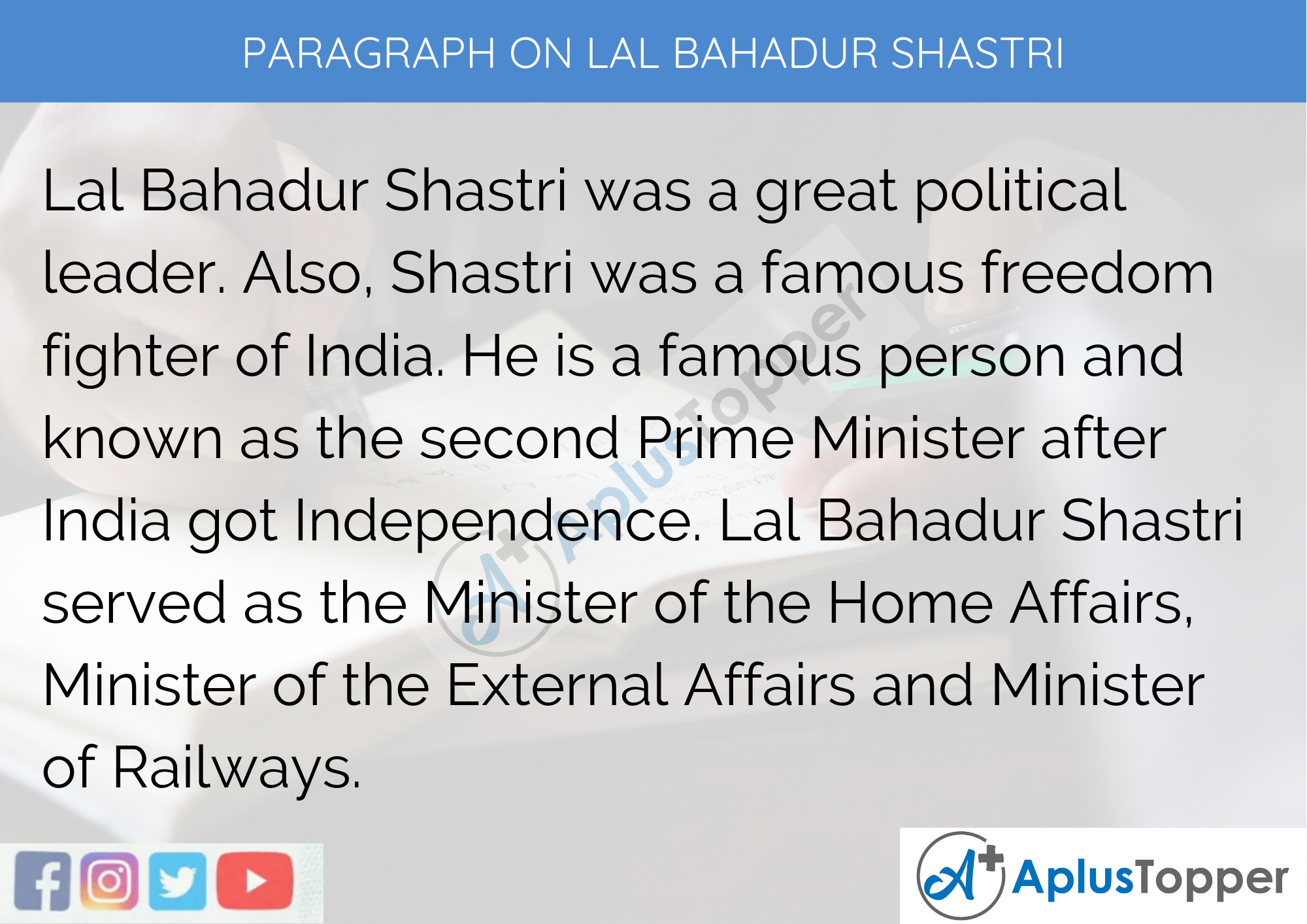 Lal Bahadur Shastri was close to Pandit Jawahar Lal Nehru. It is believed that Lal Bahadur Shastri was a master of simplicity and honest personality. He died in the year 1966. He achieved the ‘Bharat Ratna ‘ award after he passed away. At present, politics has become of the sources and also the house of corruption.

Lal Bahadur Shastri was a great personality in India. He showed his active participation in all the movements of India Independence. Some of the important events he participated are the Quit India Movement, Salt Movement, and the Non-Cooperation Movement. He had in prison for participating in these movements.

People in India respected and admired him the most for his simple and honest life. It is the reason why they chose him as the Prime Minister of India. He also made many changed in society after being appointed as the Home Minister and Foreign Minister of India.

Lal Bahadur Shastri became India PM in the year 1964. At that time, people in India were living in poverty. The main aim of Lal Bahadur Shastri is to stop the increase in prices for the food items. He also aimed the food to be available for everyone in the nation.

There are many chronic shortages of food during his ministry. Although he was a man of wit, he requested everyone to leave their one-time email of the day. Thus, the demand for food for poor people fulfilled. Indians welcomed his idea and he also left his one-time meal for a few months.

During his ministry, he started many schemes to increase production and demand in India. It proved the benefit for the farmers. He always remained in every heard of Indians.

Honesty is the core value of Lal Bahadur Shastri. Everyone in India loved him the most. He was born on the 2nd of October in Varanasi. His mother’s name was Ramdulhari, and his father’s name was Sharada Prasad Srivastava. His father was a school teacher and died of the plague. After his death of his father, his mother took care of him and his two sisters to her parent’s house.

Lal Bahadur Shastri got a sense of patriotism from one teacher named ‘Nishkameshwar Prasad Mishra. He was a very patriotic person and influenced his teacher. He went to prison when he was in the tenth standard. He completed his Bachelor’s in Philosophy and got the title of ‘Vidyapeeth.’

He showed a rare quality of courage and determination during his ministry. He gave a slogan named ‘Jai Jawan, Jai Kisan.’ After he died, he was awarded the ‘Bharat Ratna.’ Thus, a memorial ‘Vijay Ghat’ was built for him in New Delhi. He was known for his honesty and simplicity in India.

He joined the National Congress and went to jail for two and a half years. He participated in many events and movements. He was very close to Mahatma Gandhi and Pandit Jawahar Nehru. When he was studying his Degree, he delivered many speeches on Gandhi. He became one of the loyal followers of Gandhi.

After India got Independence, he became the Minister of Police and Transport in UP. He brought many changes during his ministry, like allowing women to work, using water jets to disperse crowds, etc. He worked as the PM in India from the year 1964 to 1966. Lal Bahadur Shastri served as PM for a short period. He died at Tashkent when he was there for signing the peace treaty to stop the India-Pakistan war. His cause of death is still a mystery for the whole world. 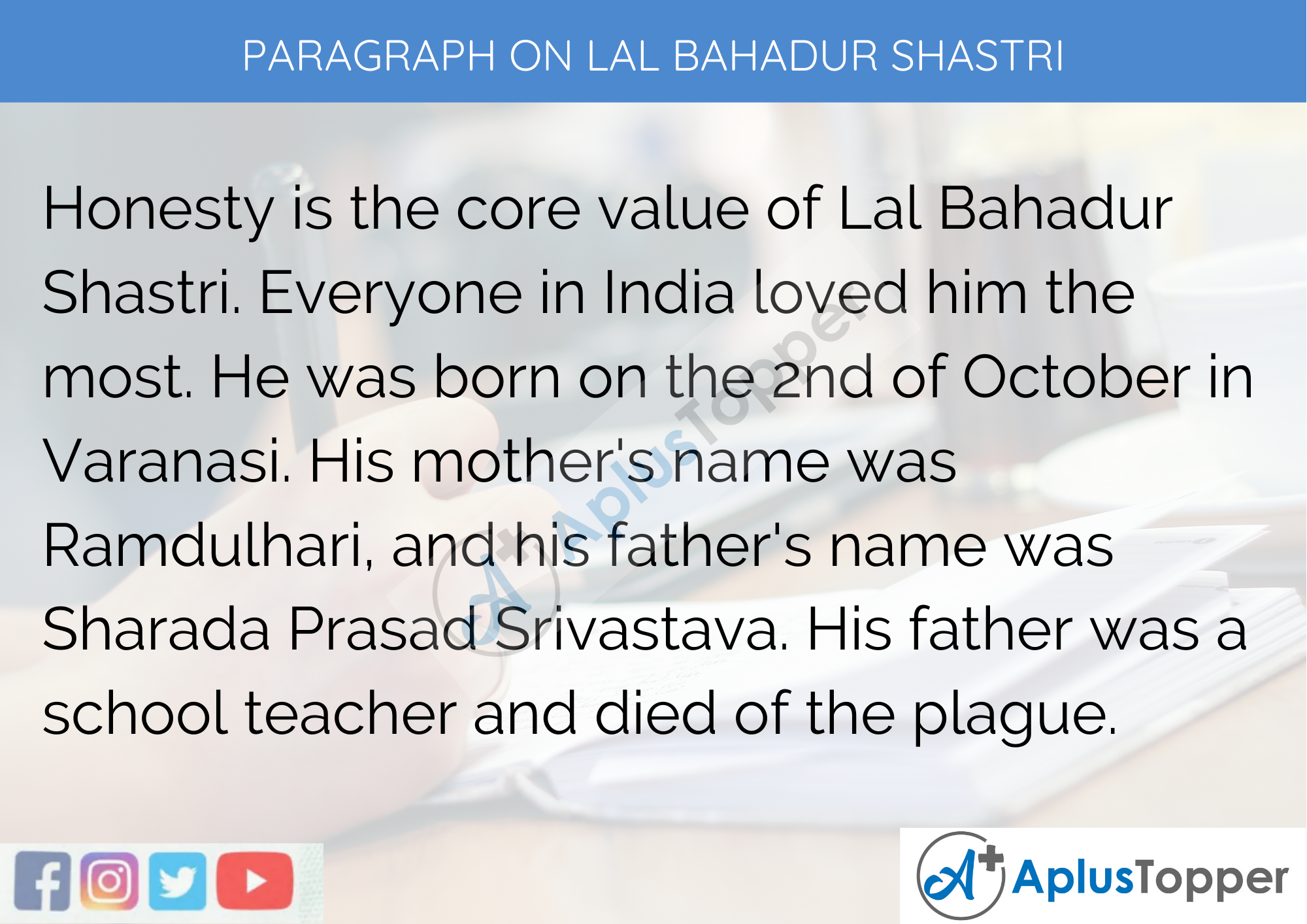 Answer:
Urwa is the village that Lal Bahadur Shastri gave the slogan ‘Jai Jawan, Jai Kisan.’ It is in the Gwalior district in MP, India.

Answer:
He was married to Lalita Devi in the year 1927. She was from Mirzapur.

Question 3.
From which year to which year Lal Bahadur Shastri served as the PM of India?

Answer:
He served as the PM of India from the year 1964 to 1966. He was the second Prime Minister of India after Independence.

Question 4.
In which year was Lal Bahadur Shastri awarded by Bharat Ratna?

Answer:
Lal Bahadur Shastri was awarded Bharat Ratna in the year 1966, after his death.