Paragraph On Honesty Is The Best Policy: The phrase ‘honesty is the best policy’ is not something we have discovered recently. Instead, we are familiar with this phrase from ages. Following the advice of the phrase provides an individual with mental peace. If our actions are the result of truthfulness and honesty, then we will never have to face emotions like guilt and the consequences of wrongdoings.

One should start by discussing the meaning of honesty before discussing the entire phrase that ‘honesty is the best policy.’ The quality of being truthful and following rules like given is called being honest.

Being dishonest might save one at that instant, but it is evident to cause big trouble when the truth comes out in the long run. If one lie is told, then eventually, one has to tell another. This will keep on going involving many such lies and make the individual worried, anxious, and unhappy.

That is why the proverb ‘honesty is the best policy’ is one of the most famous and followed phrases in the world. 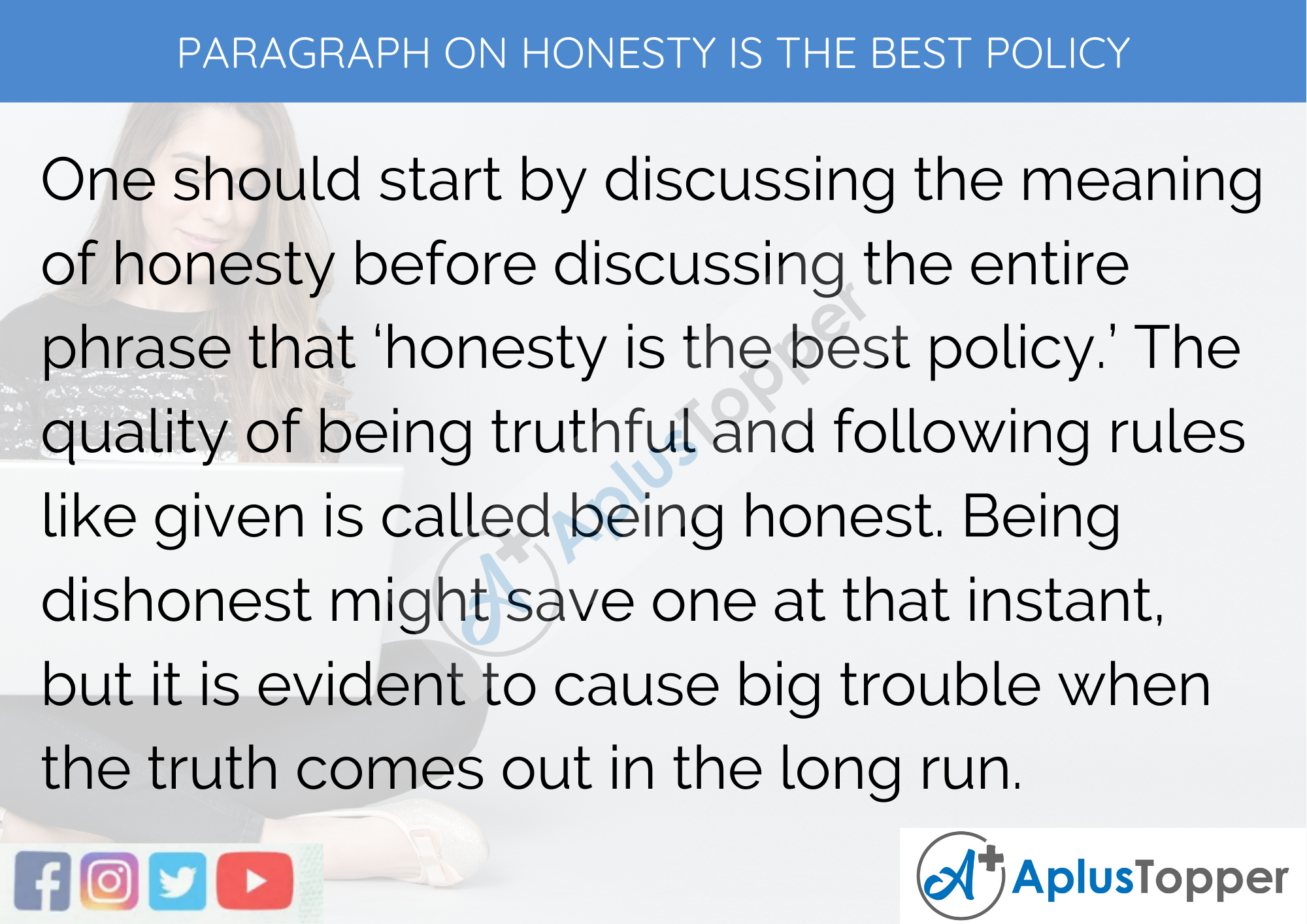 Paragraph On Honesty Is The Best Policy – 150 Words for Classes 4, 5 Children

Honesty is one of the best qualities of character noticed in an individual. It is the quality of being truthful by practicing speaking of the truth, being loyal, following rules and regulations. Honesty is also the foundation quality for other good attributes like discipline, kindness, moral integrity, etc.

However, the quality of honesty is now what the world has fallen short of recently. Whenever people find themselves in a vulnerable position, they seek a resort by saying a lie. The game of deceiving, greed, and dishonesty has become more common that drinkable clean water.

Since honesty is a rare quality, we can easily spot those who are brave enough, to tell the truth. The level of maturity in a person can also be determined by them being honest. An honest person is evident in succeeding in career and relationship because they present others with their genuine self, providing them little chance of complaint with their authenticity.

Paragraph On Honesty Is The Best Policy – 200 Words for Classes 6, 7, 8 Students

The importance of honesty is taught to kids from an early age, first by their parents and then in school. A person should earn the compliment of honesty by being dedicated and sincere towards every aspect of life.

The lack of honesty and honest people in society is evident in bringing it to its doom. The qualities like speaking the truth, following rules, punctuality, being authentic, etc. are slowly developed in a person by constant learning of ethics.

Our education system also ensures that children understand the importance of honesty by introducing them to fables like ‘the boy who cried wolf/tiger’ and ‘woodcutter and his ax’. All these stories had one common link, which is how honesty always wins over dishonesty.

The famous phrase or proverb ‘honesty is the best policy’ only reminds us that truthfulness and sincerity are the better paths to be taken by one in life. And the constant practice of honesty results in being an inculcated good habit in everyone.

It is not only the proverb that implies honesty is the best option, but people and legends also don’t differ while advising the same. Take an example like William Shakespeare, who said that the quality of honesty in a person is the greatest legacy, or as Mahatma Gandhi told that the truth is the reality.

Having transparency in your thought and what you speak or present in front of others is said to be having an honest trait. One should not only be honest with others, but they should also be honest with themselves.

Honesty is the foundation step in being noble as per Winston Churchill. The essence of humanity in the world is also restored because of the presence of qualities like honesty. If the societies of the world were denied of any honesty at all, then there would only exist chaos by the loss of order.

The reason why people opt for dishonest means like lying is because of their short term gain results. But in the long term, it is honesty that proves to be beneficial and lasting. A dishonest person loses all respect in the eyes of the others, and others also lose trust in them. Therefore, the quality of honesty works as a tool for many to voice their opinions.

An honest person might have to face many difficulties and hardships in their life, but it is their moral integrity that stops them from choosing dishonesty. Rather the satisfaction of honesty and loyalty is much greater than the feeling one gets by choosing the easy way out.

All one has to do for being honest and leading a successful life is by being truthful to others and oneself, also accepting flaws and working on them to become a better person. FAQ’s on Paragraph on Honesty is The Best Policy

Question 1.
Who is considered to be an honest person?

Answer:
A person who is genuine, truthful, and trustworthy is considered to be an honest person.

Question 2.
Mention some words that are synonymous with honesty.

Question 3.
Is a truthful person the same as an honest person?

Answer:
Yes. A person who tells the truth does not cheat, and is honorable is both truthful and honest.

Question 4.
Define the phrase- ‘Honesty is the best policy.’

Answer:
Proverb honesty is the best policy means that it is better, to tell the truth than lying.