Paragraph on Corruption: Corruption is a phenomenon that has flooded throughout the world and what is does is stopping the natural growth of countries or regions. That’s why it is also known as an all-pervading circumstance and unnecessary hindrance for countries that are striving to move forward. When there are fraudulent actions just because a person is in power, it is known as Corruption.

Corruption means practices or decisions taken that result in unfavourable solutions for lesser parties. When there is moral degradation, and no amount of honest valuation can make you realise that you have gone on the wrong path, it leads to Corruption. Lust for power and money often are the common reasons for Corruption. Corruption strips a person away from his character, and this leads to the deteriorating ability of duties. There are many political leaders of different countries who are involved in this, and it rapidly spreads to lower levels as well. Countries that are superpowers are also not immune to it. 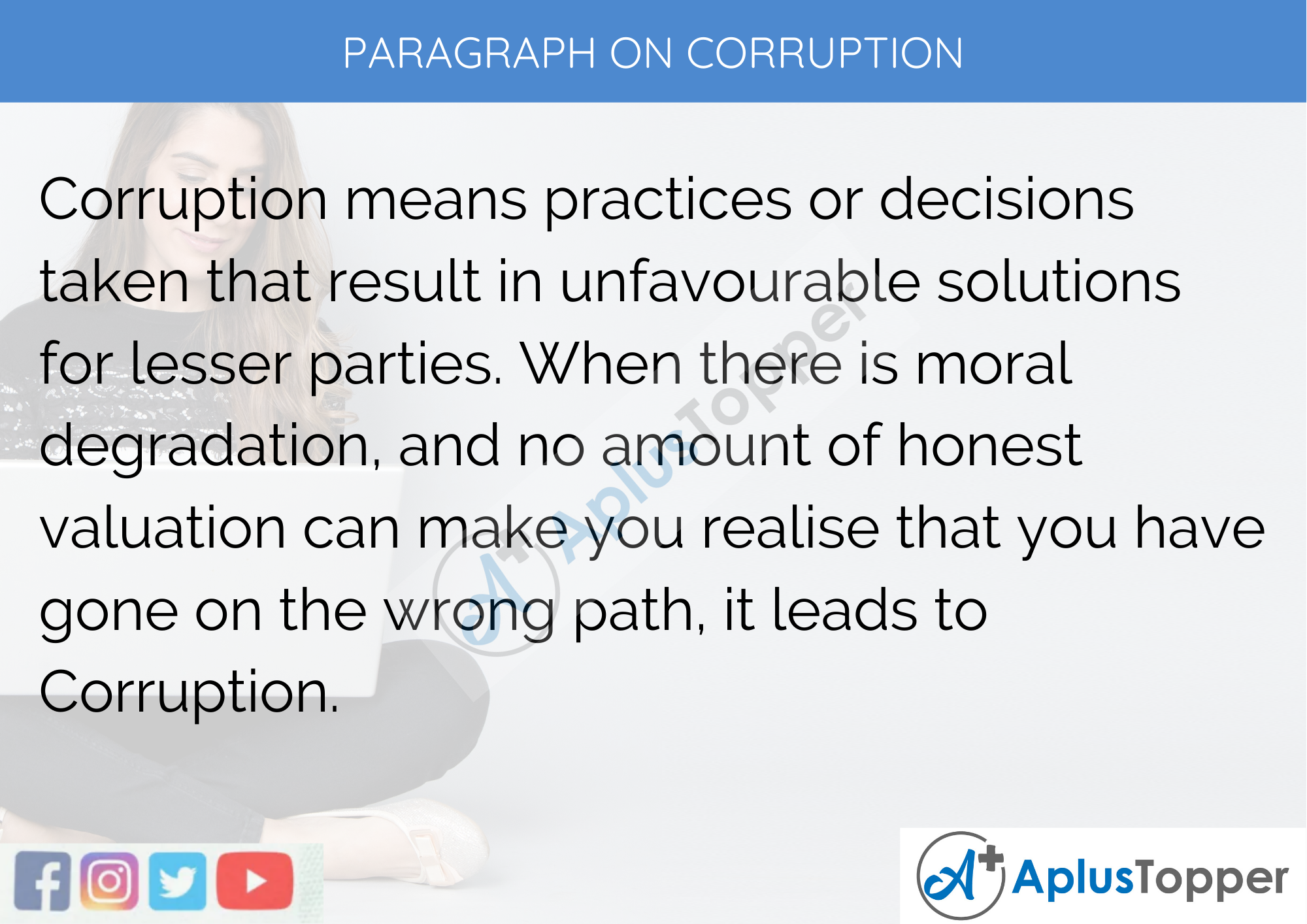 Today, No country is immune to the disease of Corruption. All and every country takes part in it involuntarily because that is the key to unbelievable success and power. And power comes from the amount of money, so people morally degrade themselves and run in the wrong direction for cash. There may be a difference in the amount of Corruption in all the countries, but it exists all the same.

Public Life, Personal Life, Politics, administration, education, and even Research and security is also not immune to Corruption. There is hardly any exception. Corruption is suitably punished in other countries, but that is not the case in India, as there is no specific punishment for any Corruption. Corruption is an offence that not ruins lives but ruins families as well because once a person gets habituated to it no one but themselves can stop them from it.

There are many scams that are not included in the public eye but have impacted a lot. They are known as Corruption. Corruption is an act of treachery that has rarely left anyone or any place. From Hospitals to corporations and governments, nothing and no one is immune from Corruption. Corruption starts from the higher levels and moves down to the lower levels rapidly, forming an atmosphere of less hard work and cheated results.

There are even proofs that politicians were provided resources by drug lords and smugglers, and when they or their existence is threatened, immediate actions are taken against them mostly resulting in death. Even the most influential countries are not free from Corruption because who would not like power and success? And the easiest way to do that is by earning an excessive amount of money. Corruption stops them from degrading influence. However, Corruption cannot prevent the degradation of their morals or values, and it increases the same. None of us can even imagine the amount of money that goes into their accounts for personal accumulations. Corruption is now a bug that is insidious inside every Department and arena of the government. Corruption has now crippled our economy, and our functions have gone haywire due to it.

A quote says that” one cannot fight Corruption by fighting it” and this is entirely correct. Corruption means the act which stems from Lust or greed for money and going to any and every length needed to get illegal tasks done. Corruption is active in each and every part and country of the world. Corruption cannot be stopped or executed in any way. It can only be finished if it is inside a man’s heart to stop it. There are many methods of Corruption, and the most common one is bribery.

Bribery means the tactic that is used for using favours or gifts for personal gain. There are different types of favours included in this. The other is embezzlement which means withholding assets which can be further used for theft. Usually, there are one or more persons involved who are entrusted with these assets, and it can also be called a financial fraud. The third one is ‘the Graft’ which means illegal use of a politician’s power for personal gain. This one is the most commonly used by Drug lords or Narcotic Barons.

Extortion means to claim any assets, land or property illegally. Favouritism or Nepotism is also in full-fledged flow these days when only the favourite persons or direct relatives of those in power ascend into their potential. There are not many ways of stopping Corruption, but they do exist.

The government can give a better salary to their employees who are equivalent to the amount of work that they put in. Decreasing the workload and increasing workers can also be an excellent way to cease this influential and illegal practice. Strict Laws are needed for stopping this and the best way to compete; this is the way of putting guilty criminals to their End. The government can work to keep the inflation levels low in the country so they can work accordingly. Corruption cannot be fought against, and it can only be stopped. 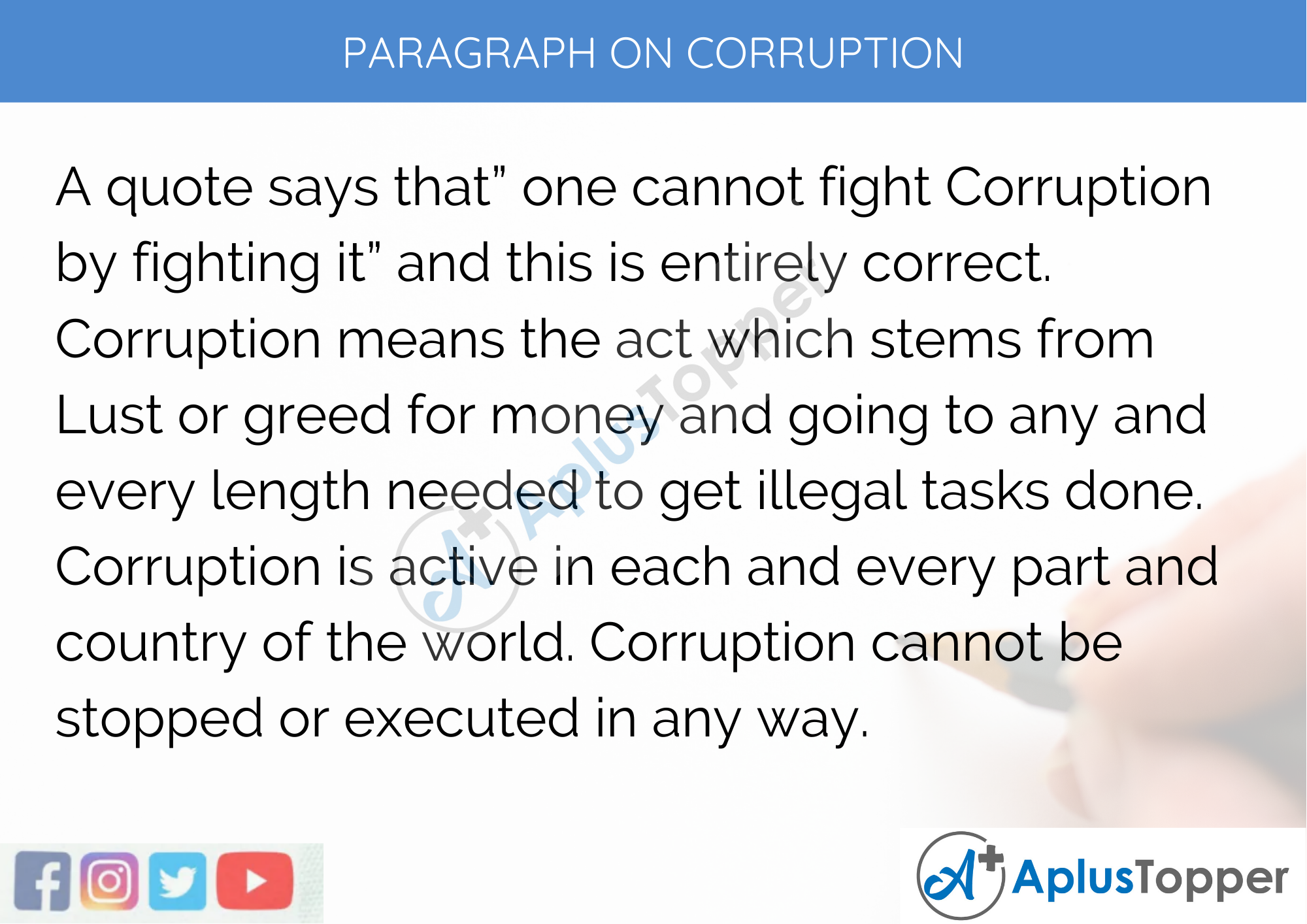 FAQ’s on Paragraph on Corruption

Question 1.
Which is the country that has the highest level of Corruption?

Answer:
Somalia is the country with the highest level of Corruption.

Question 2.
Which is the country with the least level of Corruption?

Answer:
Denmark, New Zealand, and Finmark are the countries with the least Corruption.

Question 3.
What is the severest punishment for Corruption in India?

Answer:
From a minimum of 3 years to a maximum of 7 years, there is Corruption punishment.

Question 4.
Which are the ten most corrupt countries in the world?