Obesity in America Essay: Obesity is a form of medical condition where one’s body has an accumulation of excess fat. When the BMI or the body mass index of a person is over 30 kg/m2, that person is termed obese.

In America, a considerable chunk of the population suffers from obesity. This proportion has reached 35% recently and is troubling the people of the United Nations like never before. We are providing students with samples of essay on a long essay of 500 words and a short essay of 150 words on the topic “Obesity In America” for reference.

We are providing students with samples of essay on a long essay of 500 words and a short essay of 150 words on the topic “Obesity In America” for reference.

Long Essay on Obesity in America 500 Words in English

Renowned medical institutions like the American Medical Association, the National Institutes of Health, the American College of Endocrinology and many others have long considered obesity as a serious health issue. As of now, almost 35% of the entire population of America is suffering from chronic obesity, a fact that has finally attracted the attention of the public.

According to the studies of The Center for Disease Control and Prevention or commonly termed as CDC, obesity is more of a national epidemic. It is far from a simple weight issue and is known to have dangerous and damaging effects on both the physical and the mental health of an individual.

As of 2013, America is only second to Mexico in terms of obesity occurrence. While Mexico has a rate of 32.8%, America is following closely at 31.8%. America has the maximum number of wellness clubs, the maximum variety of nutrition capsules, which makes one assume that the residents are the fittest. However, this is far from reality, and the citizens are growing more concerned about their increasing waistlines like never before.

According to an alarming report by the CDC, published between the years 2011-2012, almost 78.6 million people in the USA are experiencing from chronic obesity, which is equal to the entire population of Germany or Iran. According to the same report, there are hardly any states in the country which has less than 20% population suffering from obesity.

The states in the United States of America, with the highest percentage of obese people, were West Virginia and Mississippi, where the percentage is over 35. The lowest rates, lying between 20%-25%, were in the states of Vermont, California, Hawaii, Utah, Massachusetts, Colorado, Montana, and Washington, DC. The regional pattern that could be noticed is that the south has the highest cases of obesity, while the west had the least.

Obesity is now becoming the evilest possible enemy for Americans. With a fast-paced life, fried food, and bad eating habits, obesity has become a common occurrence. The people are obsessed with eating up to a point where nothing can be done. The younger generations are not advised to eat vegetables as the parents themselves are more drawn toward pizzas or burgers.

Other than this unhealthy food habit, there are numerous reasons for obesity among Americans. The environment where the Americans live in is to blame for obesity as well. The environment supports easy access to unhealthy food. Overeating is encouraged, and technological designs urge people to be lazier than before. With less exercise to do, no wonder the Americans are quick to gain weight.

The Americans are yet to realize how adversely obesity might affect them. From increased chances of cancer to occurrences of the stroke to even cardiovascular diseases are all the consequences of obesity. Obese children are prone to serious health issues like type 2 diabetes.

To tackle the prevalence of obesity, the people of America should be aware of the adversities. They should encourage themselves and their following generations to live a healthy life. 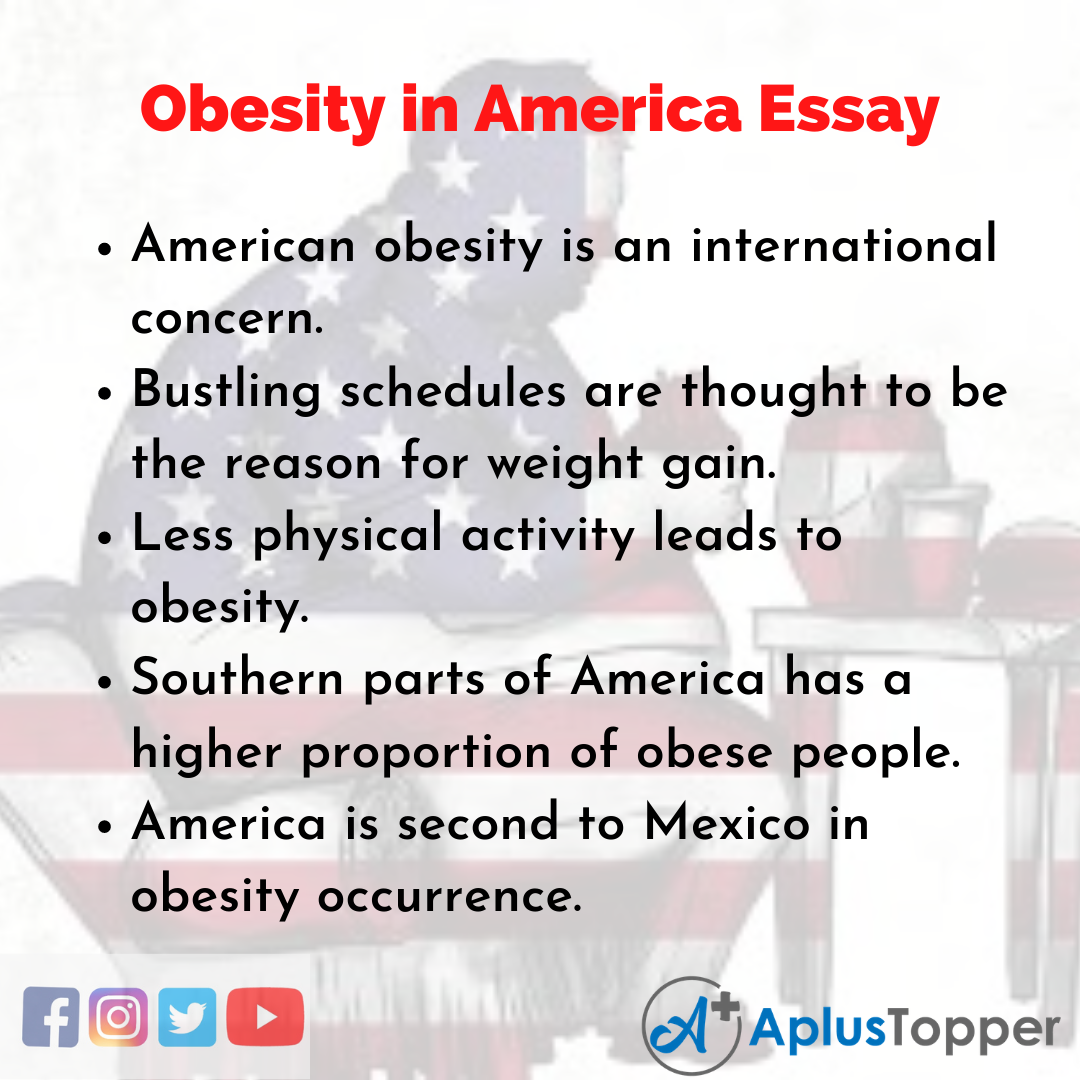 Short Essay on Obesity in America 150 Words in English

Life in America is fast-paced, with more food joints than living residences. Today America has almost 35% of the population, which is prone to obesity, and this proportion is bound to increase further if not step is taken quickly.

The noxious environment, the steady growth of innovative technology, and lack of physical activity are all reasons for the increasing waistline in American citizens. The kids are not encouraged to eat more vegetables, but the intake of oily and fatty foods are not prohibited. The hotels and restaurants are offering larger servings of the poison to survive in competition.

10 Lines on Obesity in America in English 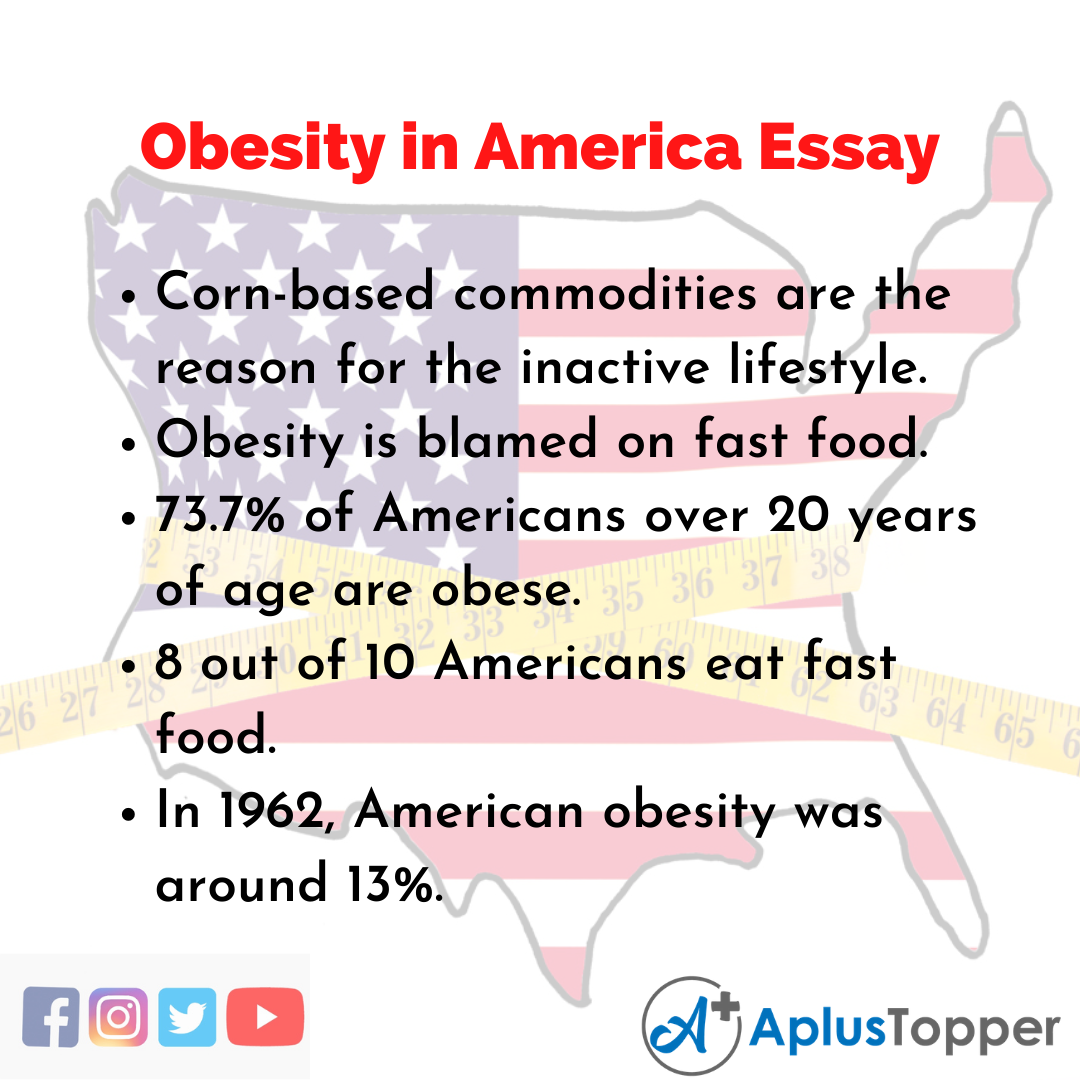 FAQ’s on Obesity in America Essay

Question 1.
Why are Americans obese?

Answer:
The unhealthy lifestyle with more fast food and less physical activity is the main reason for most Americans being obese.

Question 2.
In America is the obesity rate increasing?

Answer:
Yes, it is increasing at an alarming rate.

Question 3.
What is the indicator of obesity?

Answer:
BMI or Body Mass Index is the parameter on which obesity is measured. If the BMI goes beyond 30kg/m2, a person can be called obese.

Question 4.
What is the global scenario of obesity?

Answer:
According to WHO, American Samoa is the top country concerning obesity, closely followed by Nauru, then Cook Islands, Tokelau, Tonga, and many more. WHO gives this data concerning a survey of 200 countries.