Nuclear Pollution Essay: Mishandling and inappropriate usage of nuclear fuels and related products lead to nuclear pollution, which is a hazardous situation hindering global advancement and development. There are severe health and environmental causes due to this type of pollution. Thus it is essential to spread awareness among people about the same and make everyone well-versed in the ways to control and prevent it.

Here are three Nuclear pollution essays for different word ranges for various usage. The nuclear pollution essay might also be fruitful for the students to produce speeches and debates and help people while preparing for any essay competitions. Students also have to understand these concepts in environmental studies subject in schools as well as in higher education, and using any of the Nuclear Pollution Essay for reference can help them prepare well and in brief for any examination. Check each Nuclear Pollution essay briefly and get all the details related to the concept in a comprehensive manner. Please go through them to effectively use them whenever required for any scenario.

Nuclear pollution has adverse effects on almost all the life forms existing across the Globe. From Plankton to humans, every living organism suffers from the unfavourable and severe consequences of nuclear pollution. The harmful radioactive radiations of nuclear power plants are known to cause mutation, and this might lead to some fatal diseases and rising fatality rate. Nuclear pollution is the most dangerous form of pollution, and this is the result of explosions during the conduction of nuclear tests. Nuclear tests are then used for inventing nuclear weapons. In this action, around 15% to 20% of radioactive elements are released in the stratosphere. As the details enter this layer, they start falling into the Earth’s atmosphere.

Fallouts are the smallest particles of the radioactive elements. They settle on the leaves of the plants and trees, which the pastured animals feed on. The radioactive elements thus enter the entire ecosystem, causing severe damages and losses. The particles are also consumed in human food sometimes, thus leading to serious health hazards. Fall sometimes also enters the water bodies and affects aquatic life, thus indirectly leaving adverse health hazards for humans.

Many other reasons lead to nuclear pollution, and other industries directly or indirectly related to the nuclear power generation are one such reason. Nuclear pollution caused by improper waste management of radioactive nuclei is most dangerous as the garbage is capable of retaining the radioactive properties for thousands of years. Initially, there is no way to consolidate this waste into soil, air, or water. 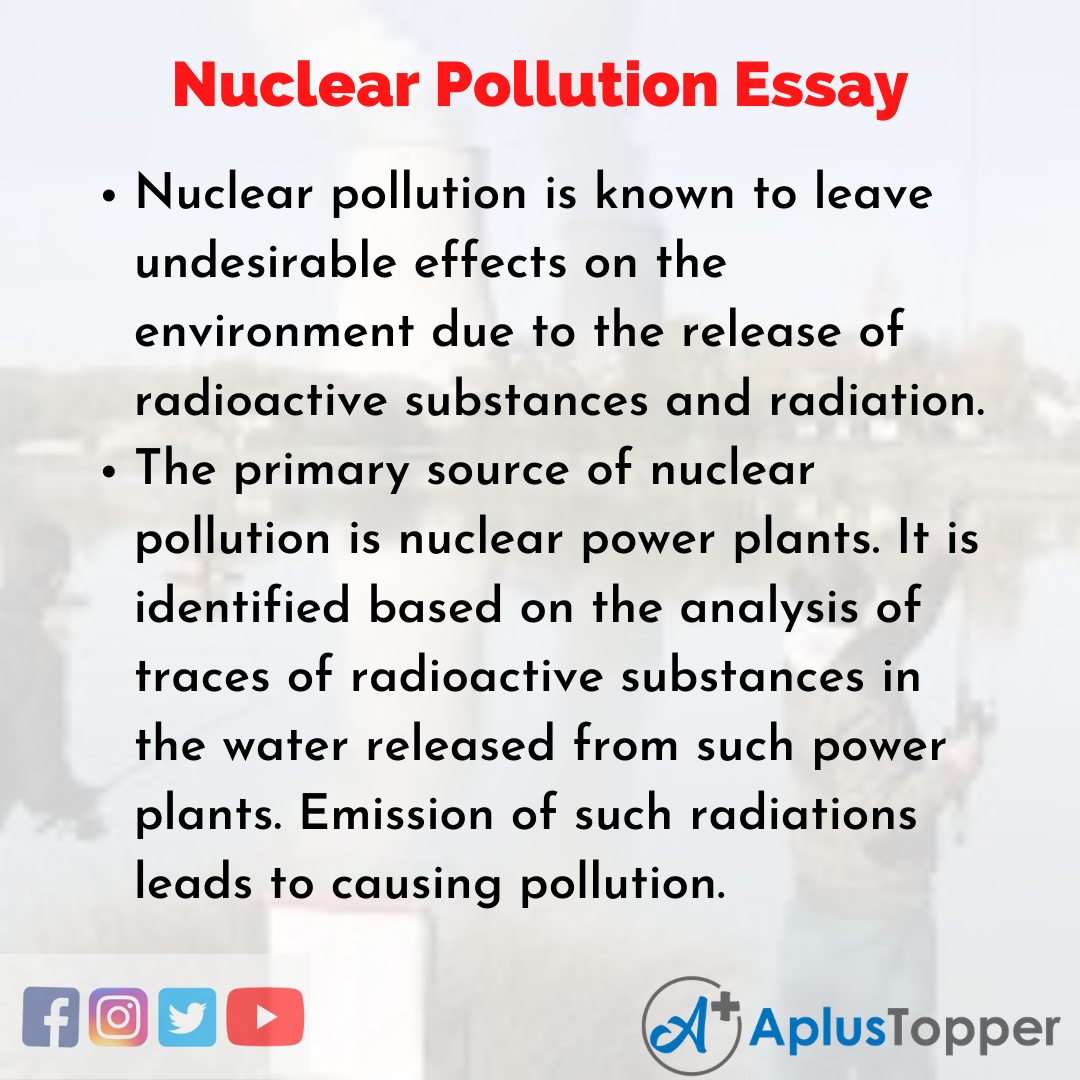 Several issues result in the pollution of the environment apart from the misuse of fossil fuels. Even the wrong usage of nuclear energy might add to raising the pollutants level in the atmosphere and thus causing pollution. The pollution that results from nuclear power from the fission process is more damaging than that caused due to the usage of fossil fuels. This harmful pollution because of nuclear energy is nuclear pollution.

There are several radioactive nuclei present across the Globe, and they carry both positive and negative reactions to the environment and the health of living organisms. As the radioactive elements are beneficial for treating cancers, and diagnosis of various diseases and 17% of electrical energy also come from these isotopes. Still, improper usage and disposal lead to harmful and fatal effects.

As nuclear energy production carries on, it leads to the production of waste materials in various steps, which is harmful and is collectively known as nuclear wastes. If anyone ever dumps the radioactive wastes in the garbage bins, they emit the nuclear radiations and pose risks to the lives of humans as well as animals. However, if ever dumped in the sea or rivers, these wastes contaminate the entire water body and damage the aquatic life.

This is a significant reason why Nuclear pollution has become the issue of a legitimate concern for the public, especially after Russia’s Chernobyl accident. The fuel processing plants are the primary reason behind around 99% of total radioactivity in the entire cycle of nuclear fuel and energy. To ensure that there are no chances of any environmental and health-related hazards of the radioactive wastes, the three-stage purpose is adopted across various parts of the Earth.

The right measure for nuclear waste disposal is to first incorporate in inert and stable solid matrices. Further, the conditioned waste gets transferred in the canisters and kept aside in the retrieval store under constant surveillance and cooling. Finally, the canisters are stored in some suitable place. The authorities set up the waste immobilization plant to incorporate the higher-level radioactive nuclear waste generated from the fuel processing plant and solid storage surveillance. Tarapur has a prominent set up for the same in India.

In the immobilization process, the verification of radioactive nuclear waste is carried out that gets cooled down at underground disposal. The storage area’s canisters are also air-cooled by natural convection. Additionally, when the heat radioactivity decays to a desired level, it gets transported to suitable and perfect geological formation for the final storage. There is a graveyard at Trombay which is situated exclusively for nuclear waste disposal.

Certain occupations lead to the exposure to radioactive elements, like the radium watch dial painters, uranium mineworkers, nuclear power plant staff, and others. The workers here are exposed to the radioactive nuclei for a longer span and thus results in severe and fatal effects on the workers’ bodies. Nuclear pollution might cause initial or residual impact, which lasts for an instant, months, or years. Therefore, it is essential to spread awareness about the matter and the ways to control it. And proper nuclear waste management is the initial step, to begin with for the entire journey to control nuclear pollution.

There is a growing need for limiting nuclear pollution and clearing the planet rapidly by proper nuclear waste management. None of the global nations is successful in nuclear radioactive isotope and radiations’ control and solving the central issue of nuclear pollution. Due to the lack of a proper way for disposing of the nuclear waste, there is a general requirement of storage area for handling it, for the time being, leading to various security and safety concerns for the global folks. For the regions storing this waste, it is essential to go for periodic screening and following storage and safety regulations to prevent any significant hazard.

Nuclear pollution can be limited to much extent by popular waste management and storage handling of nuclear waste and radioactive elements.

There are major life-related issues of nuclear pollution, like the aquatic life is at stake due to the disposal of radioactive elements in the water bodies. Greenpeace also indicated a more considerable amount of plutonium pollution by nuclear power plants on England’s coasts. This rate is also rising rapidly, causing fatal effects for aquatic life, and in the long run for the human population too. Moreover, nuclear pollution is adversely affecting and destroying the entire ecosystem of the Globe.

Non-explosive nuclear reactions also lead to the generation of controlled electricity, and thus atomic energy. Thus, even though nuclear power plants has adverse effects and is the reason for rising pollution, it still accounts for 15% to 20% of electricThereforeproduction despite the rising safety concerns. Not only this, but 150+ naval vessels are also built using the nuclear propulsions across the Globe. Due to the latter usage, fusion power is under intense investigation to assure viability and safety concerns.

Radiations are just like the emission of any other energy wave through space and physical objects. Usually, they are the electromagnetic energy waves in nature and classified into radio waves, visible light, infrared waves, X rays, gamma rays, and others. The primary cause of radioactivity is because of radioactive decay. The radioactive radiations are capable of quickly travelling through the smallest inches and can penetrate deep inside the organisms’ bodies, causing adverse reactions inside the bodies.

The nuclear pollution and emission of radioactive radiations result in somatic and genetic effects on the living organisms. The somatic effects of the pollution impact the cells and organs; this causes damages to the membrane, mitochondria, and nuclei of the cells and results in abnormal division, growth, and functioning among them. In contrast, genetic effects are for future generations. Nuclear pollution causes radioactive radiations, and this causes mutations that change the development of the cells. They also damage the DNAs at times and also result in fatal cancers.

The most popular nuclear bomb explosion is of Hiroshima that exploded four hundred times more deterioration. That caused an immense amount of nuclear pollution, contaminating the atmosphere, lithosphere, and hydrosphere, causing fatal effects on biological lives. The accident caused a severe loss of life and economy for Japan, and it caused years for the nation to overcome the destruction.

Radioactive waste thus requires proper waste management and must be stored under proper care and supervision. Nuclear power plants must also be situated far from the residential regions, and after precisely understanding the geology and tectonic activities of the region. The workers of such plants must also be given proper advisories for their safety and care. Moreover, the most preferred way of nuclear waste management, as suggested by the scientists must be chosen, which is to bury it deep inside the Earth’s crust. 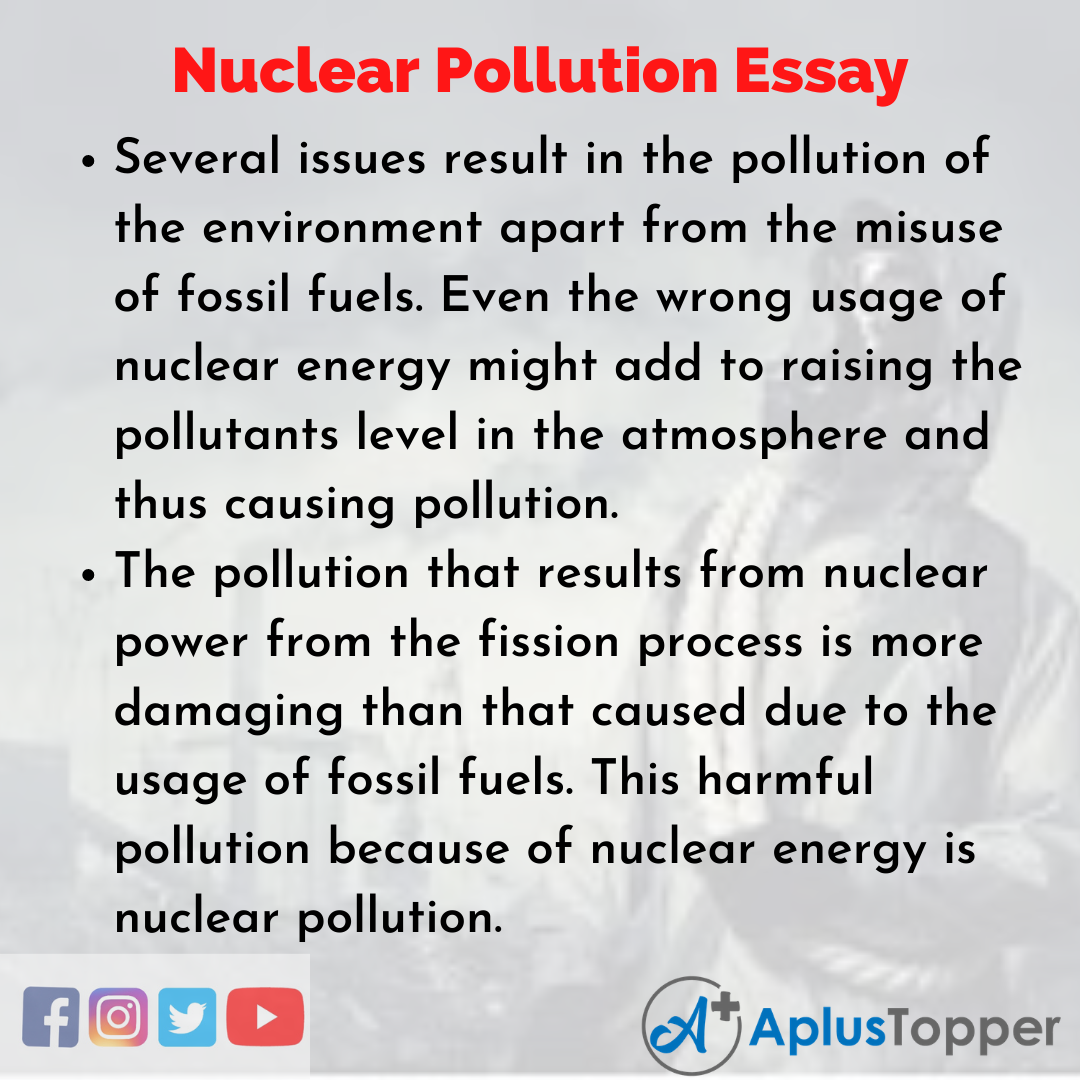 Nuclear pollution is a severe and most harmful effect on the environment as well as the biological lives across the Earth. It is essential to raise understanding and sincerity about the matter and develop various safety and precautionary measures to prevent it. Nuclear Pollution Essay is one way of gathering all the details about the matter and spreading awareness among the people.

Students and adults can use any of the Nuclear pollution essays for their studies and prepare any speech, debate or article content, publish and spread awareness about nuclear pollution, its causes, effects, and safety and precautionary measures. The long 800 words Nuclear pollution essay also carries the real-life example of the adverse effect nuclear radiations and can be used to state the example for motivating people to prevent any such future effects and stay safe.