Essay on Necessity Is the Mother Of Invention: Necessity is the mother of invention is an ancient proverb, most probably authored by Plato, the Greek philosopher. The saying means that humans create or invent things only when they feel a necessity for them. Since ancient times, humans have made timeless inventions that have to the modernization and improvement of society. All these inventions were made out of need.

In this article, we have provided an extended essay, a brief essay, along with ten lines on the topic, to help children write this essay for their examinations.

In psychology, need is said to be the driving factor for all men. Ned influences our actions, emotions and motivations. Without needs, man would be a neutral creature.

Necessity is the mother of invention is a proverb that impresses in us the fact that man only discovers something that he needs. The tremendous urge in man to lead better lives drives him to make inventions. The cycle has been going on since the Stone Age.

Man is never satisfied with what he has. He always aspires to have more. This urge in men is not necessarily greed; it can merely be the ambition to go higher and achieve better things. Man feels the need for certain things, and he feels that his path to greatness is being obstructed due to the absence of a particular item. This need urges him to invent new things and discover more fabulous tools. Thus, the invention is driven by necessity and is a product of man’s ever-increasing desires.

In ancient times, man used to live in caves and hunt animals for survival. They barely wore any clothes and ate raw meat. Gradually, they realized that life was getting too uncomfortable in the bone-cracking temperatures. They were scared of freezing to death. This overwhelming need for survival led man to invent fire. They noticed that by building a fire, they could stay warm and comfortable. They understood the value of cooked food and used light to roast the fruits of their hunt.

With time, the man felt the need to have something that would reduce their labour and make their lives easier. The first machine was built out of the necessity to overcome their difficult work. The man realized that the wheel made transportation easy. Slowly, they began building tools and instruments that helped them do their jobs more efficiently.

The invention of houses also rests on need. The man felt the need to live together as a civilization. They found it easier to live in cities which had more facilities. Inventing ways to build houses, streets and roads arose out of man’s need for security. He understood that living in caves was unsafe for him and his family. To protect himself from violent attacks, man built civilization.

We can take an example, and we will see how necessity and need to drive man to invent new and better things. Modern-day technology is wholly based on necessity. The man felt it was challenging to communicate with people over long distances. Hence he invented the telephone. Be it information technology or the internet, and every invention happened out of need.

Man can rarely compromise on his needs. He only represses those desires which are harmful or unacceptable to others. Man channelizes his overpowering urges to benefit society. Each invention has caused humanity to progress and prosper. We must understand the tremendous motivation necessity creates and acknowledge our efforts for making life so much better for us.

Man has always used his necessities as his drive to make something new. Men are ambitious creatures, and they discover and conquer new areas to earn better lives for themselves and others.

We must realize that men do not create things because they want to. They build them because they need to. Even if we consider the most basic needs, that is, hunger, sex and shelter, we will see that we invented food and houses because we wanted to fulfil our needs.

Abraham Maslow has shown in his Need Hierarchy how men always work towards satisfying his needs. Thus, necessity is the driving force behind every invention. 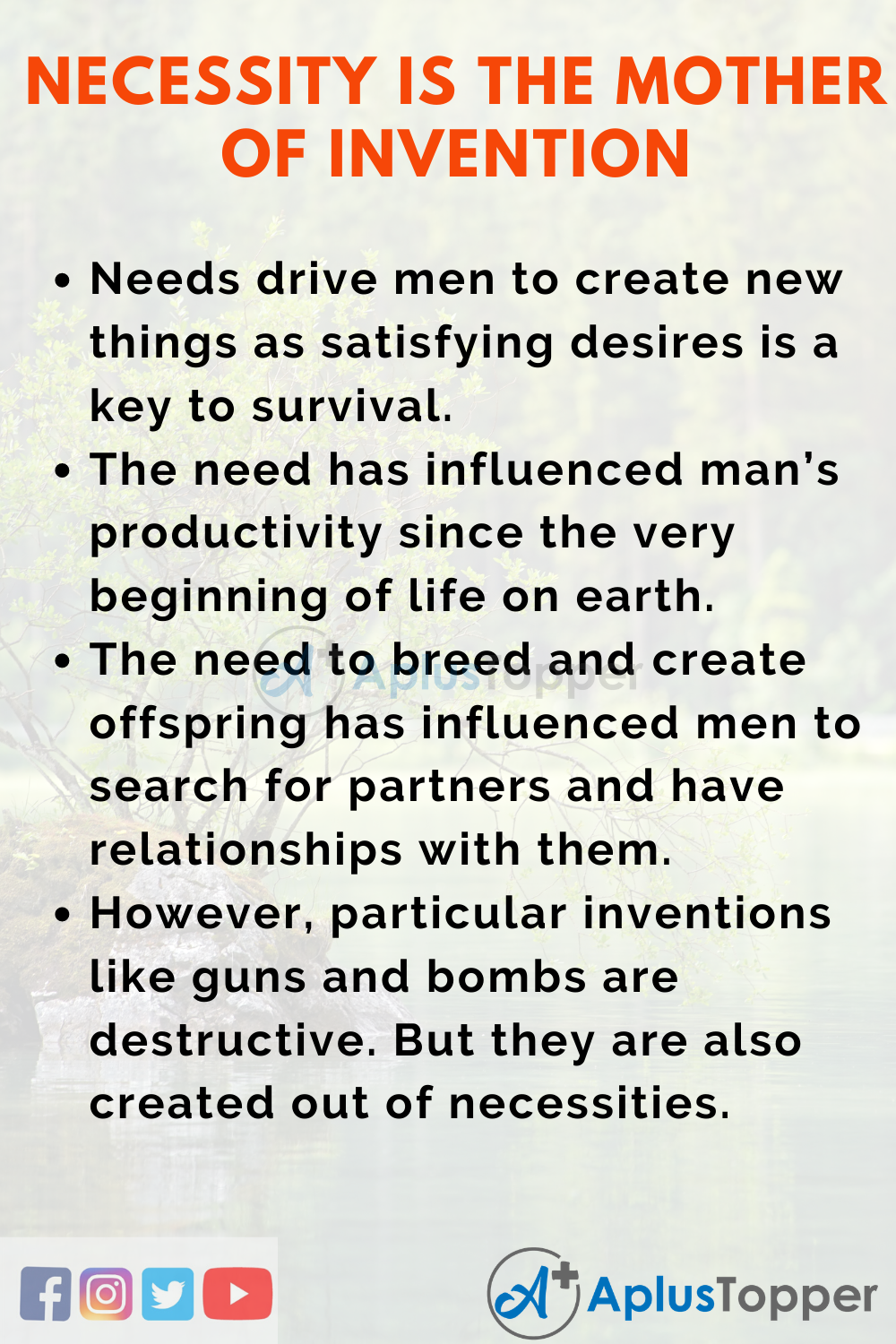 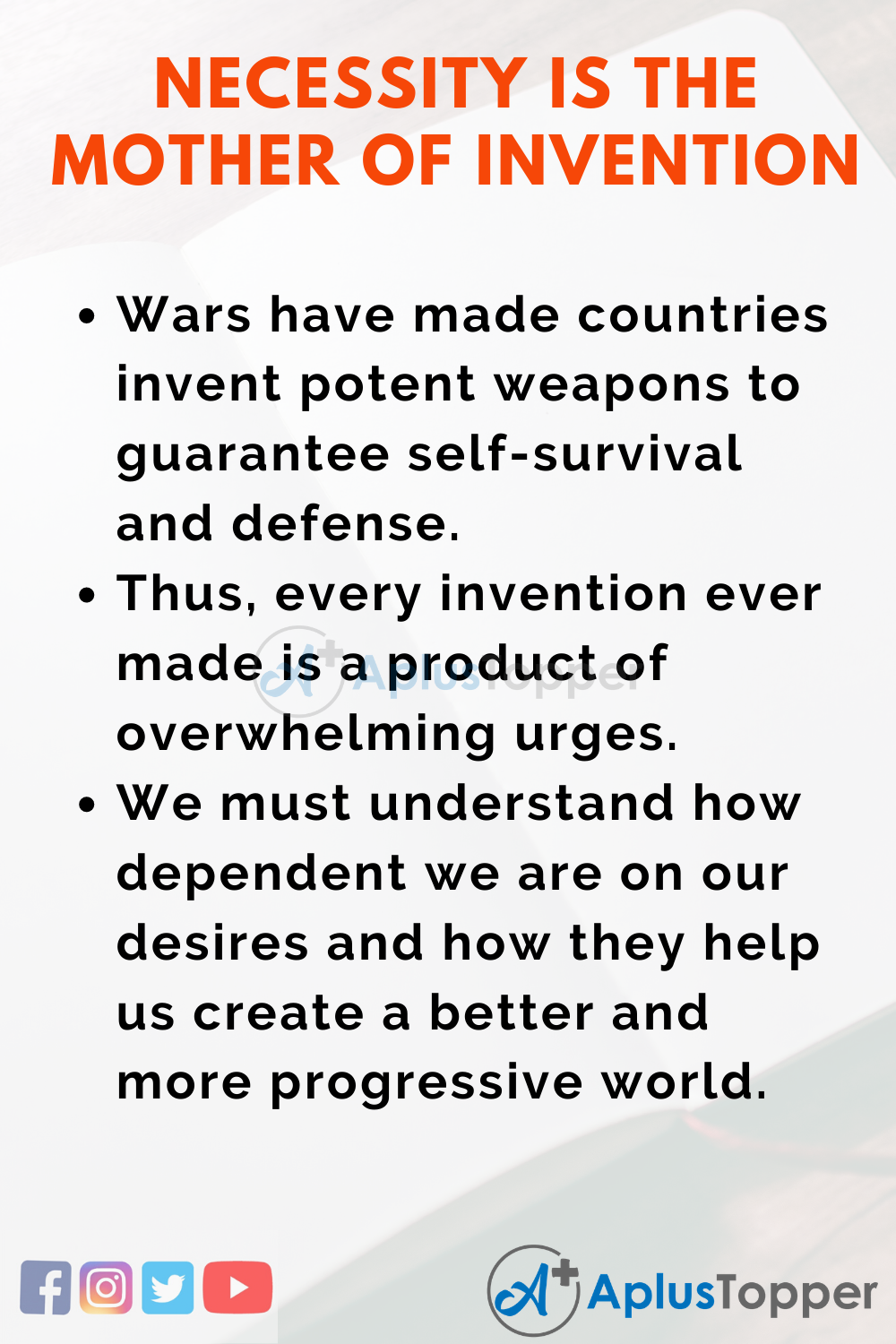 FAQ’s on Necessity Is the Mother Of Invention Essay

Question 1.
Why were weapons created?

Answer:
Weapons were created by different countries during wars, to protect themselves against their enemies.

Question 2.
What was the need behind creating the internet?

Answer:
Man’s tremendous urge to attain things easily and his thirst for knowledge made him invent the internet. He can now get access to everything with a simple click.

Question 3.
What is an invention?

Answer:
Invention ideally refers to the discovery of something new and unique, which will help us to progress.

Question 4.
Can fire be called an invention?

Answer:
Fire can be considered as an invention. It arose out of a need for survival and helped in creating a better society.