Naxalism In India Essay: India, having one of the fastest growing economies in the world, and being the most populous democratic country, has great potential to become a future superpower. However, in this increasingly globalised environment, India faces several threats to its security. Naxalism has been identified as the biggest internal security threat to India by the former Prime Minister Dr Manmohan Singh. The complex and structural causes of the problem support this proposition.

Long Essay on Naxalism In India 500 Words in English

Below we have given a long essay on Naxalism In India of 500 words is helpful for classes 7, 8, 9 and 10 and Competitive Exam Aspirants. This long essay on the topic is suitable for students of class 7 to class 10, and also for competitive exam aspirants.

The Naxal movement also presents the greatest overall concern to India in the future, as it highlights various underlying weaknesses of India’s governance, political institutions and socio-economic structure. Naxalism is the biggest problem that India is facing today because it affects several areas including the economy, security and foreign affairs, its citizens and rule of law. Because of the multi-dimensional aspect of the Naxal problem, a three-pronged approach should be taken in dealing with the threat. It calls for a balance between military forces, social and economic development, as well as dialogue between all parties.

The Indian Maoist movement, popularly known as the Naxal movement, arose from the broader communist movement in India. The words Naxal/Naxalism/Naxalite owe their origin to the Naxalbari village of the Darjeeling district in the state of West Bengal, from where the peasant insurgency led by the Maoists began in 1967. The Naxal uprising was led by Charu Majumdar (chief ideologue), Kanu Sanyal (peasant leader) and Jungel Santhal (tribal leader).

Chinese media described the Naxal movement as a ‘spring thunder’ which quickly spread to other parts of the country and caught the imagination of the nation. The movement nevertheless subsided after the death of Charu Majumdar and the arrests of Kanu Sanyal and Jungel Santhal in 1972. However, the movement was revived in the 1980’s by the Peoples’ War Group (PWG) in Andhra and the Maoist Communist Centre (MCC) in Bihar. The Naxalites are currently considered to be the most radical groups among the Indian communists.

The success of the Maoist movement is deeply rooted in the weakness of some parts of the Indian state to fulfil its ideally functions and responsibilities. Although India, in comparison to other former colonised states, was able to develop a powerful apparatus of state, state control remains in large parts precarious in terms of its conception. State administration is especially in those areas sparsely developed which are most affected by Naxalite violence.

This fact is reflected inter alia by small state budgets, low bureaucratic efficiency as well as prevailing corruption. There are even some remote areas where state domination is almost completely absent. In these regions that are characterised by weak governance, traditional types of rule were able to persist. Social elites like high castes, landlords and loan sharks dominate the rural population and benefit from their exploitation. State-aided rural development programmes in these areas have often not reached the bottom of the society and instead contributed to the persistence of landlordism.

In 2013, the government identified 26 districts in the country as highly Naxal-affected with 80% violence in the last three years being reported from there. The districts are spread over seven Maoist-hit states – Chhattisgarh, Jharkhand, Odisha, Bihar, Andhra Pradesh, Maharashtra and West Bengal. There was some debate in India on number of districts or the area in the country that is affected by Naxalism.

These numbers have been varying from 60 to 200 plus depending on the intensity of violence. At the same time allotment of special funds for development and security by the Planning Commission as well as the Ministry of Home Affairs had led to declaration of even less affected districts as under Naxal control by states, 83 such districts in the country had been identified, mainly in the seven most affected states as mentioned. 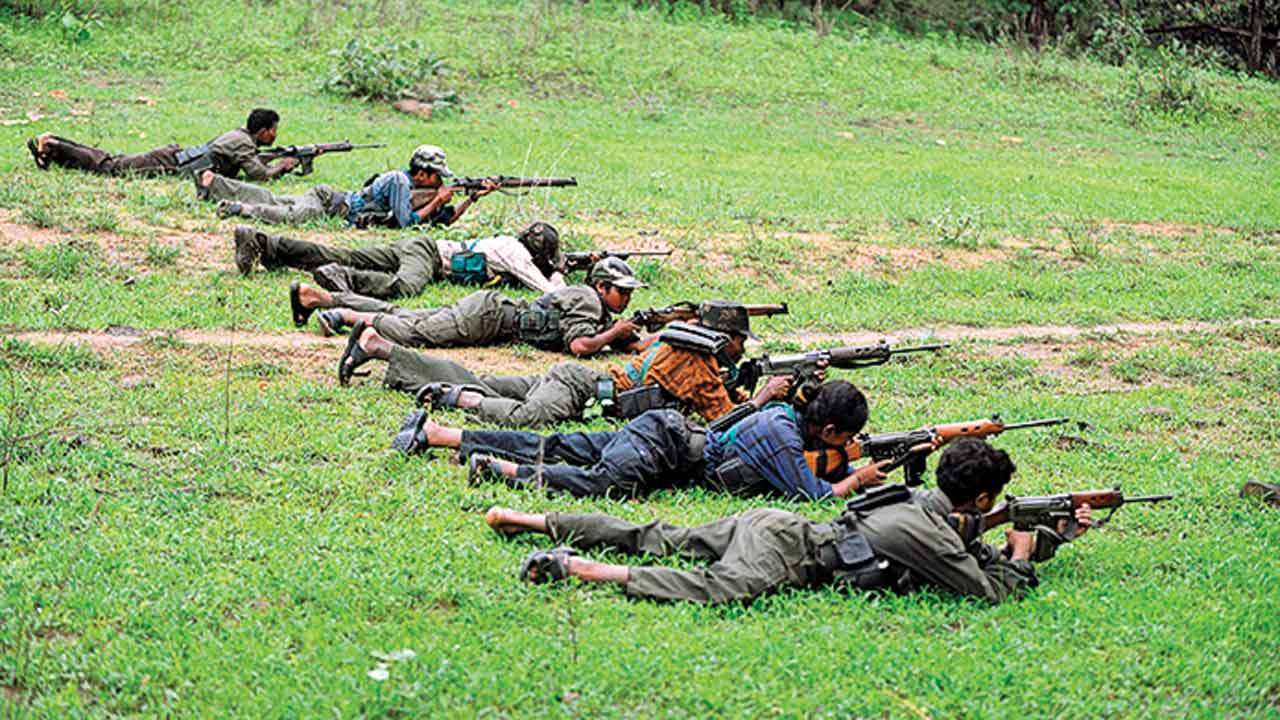 Short Essay on Naxalism In India 200 Words in English

Below we have given a short essay on Naxalism In India is for Classes 1, 2, 3, 4, 5, and 6. This short essay on the topic is suitable for students of class 6 and below.

The complexity of the causes of the Naxalite problem as well as its implications both for internal and external security reflect a solution that is multi-dimensional and calls for a synergy between the central governments and the states.

In order to comprehensively dissolve the Naxalite threat, the government has to address its root causes. Socio-economic alienation and the dissatisfaction with the widening economic and political inequality will not be solved by military force alone, which seems to be the main instrument employed by the government. Keeping in view the fact that the Naxal groups have been raising mainly land and livelihood issues, it is important that land reforms are taken up on a priority basis. States have also to focus on physical infrastructure like roads, buildings, bridges, railway lines, communications and power etc. There is no room to brook any delay on this account.

Unfortufiately, the several rounds of talks held with the Naxals hitherto and the announcements of amnesties and attractive rehabilitation schemes have not worked so far. Some states like Andhra Pradesh have a good rehabilitation policy and it has achieved some success, but a lot more remains to be done. The Government, indeed, is committed to addressing the Naxal problem in right earnest. It is focusing on improving intelligence set up at the state level, providing help to the states to modernize and train their police forces and accelerate development in the affected areas. What is needed is better coordination both on security and developmental fronts to meet the challenge posed by the Naxals. We must realise that the Naxal movement is not a secessionist movement like the Northeast or Kashmir insurgencies. These are our own people asking for their own deserved rights and dues.