Natural Resource Depletion Essay: To survive on this planet has only been possible because of the natural resources of the earth. Mother Nature has provided us with so many natural resources to make our lives comfortable. Natural resources like wood, minerals, coal, water, plants, fuel, and air have been provided by mother nature. But now for the longest period of time, we have been destroying these resources and overusing them to the extent that their depletion could be soon. The earth is our home planet and we must protect it at all costs, before venturing out to other planets and seeing the viability of life, let us try to save what is left of our planet as it is still not too late.

We provide children and students with essay samples on a long essay of 500 words and a short essay of 150 words on the topic “Natural Resource Depletion” for reference. 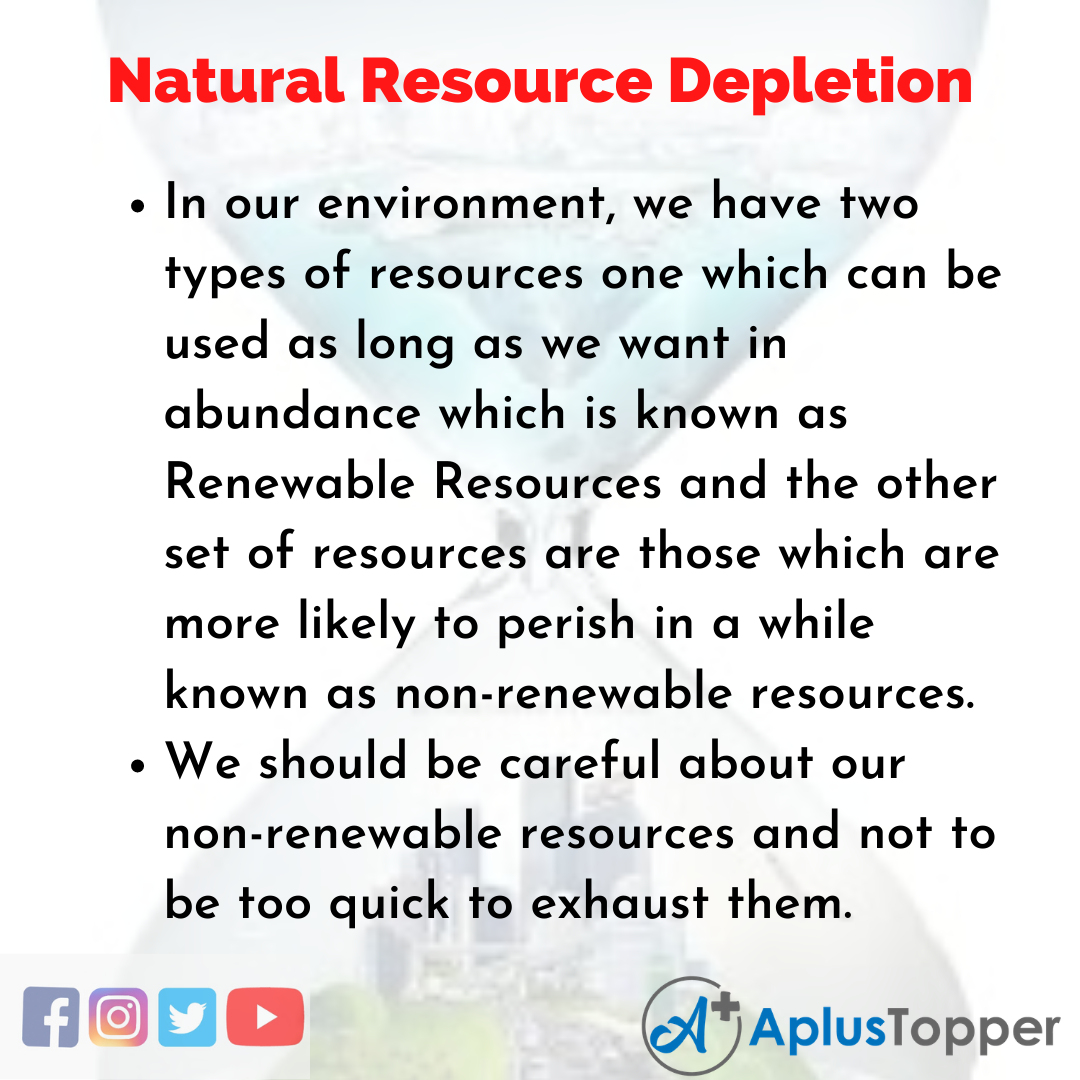 Natural resources have given us so much to live and have made our lives so comfortable and nourished us for so long. With the help of these resources, we have been able to make so many advancements in technology to the point we have found viable ways to use these resources so that they won’t get exhausted so quickly. Long Essay on Natural resource depletion is usually given to classes 7, 8, 9, and 10.

Natural resources are everything we find around us that has been produced by nature naturally, this includes the air we breathe, the water we drink, the sunlight we bask in, and also other organic elements such as minerals, timber, and fossil fuels. Without these resources, Human life would have been impossible.

Certain biotic elements are the natural resources that are obtained from living organisms such as animals, forests, fishes, and also fossil fuel because it is actually the decay of the dead organisms. The resources which are referred to as the non-living elements of mother nature are Abiotic Resources, examples are soil, minerals, wind, sunlight, etc…

Over the years humans have learned to use our natural resources in ways that they are originally not intended for like using water not only for drinking but also creating hydroelectric power., using sunlight as solar energy, and so on.

Ever since industrialization and globalization, we are moving forward to find ways where we can use our resources in different ways and also create various products that can also serve us in better ways. In our ecosystem not all resources are unlimited and we have to learn to be careful of our consumption. Over the past couple of decades, many technological advancements have made our lives much more convenient and also we have found so many alternatives to some of the natural resources.

After industrialization and globalization came trade and commerce which sparked up interconnectivity between people and this allowed for an instant boom in technology which has allowed us to create many efficient and effective products that are designed to serve us better. We have also realized that we need alternatives to these resources quickly because we are constantly using our natural resources and they are not unlimited.

Advancements like wind, hydro, biomass, geothermal, and solar are renewable resources because they are present in such abundance and they are constantly self-replenishing in nature. The resources such as nuclear elements, coal, iron, freshwater, and fossil fuel will take a million to self replenish and we must move start using alternatives ao we deplete these resources.

Historically speaking natural resources were very important for countries if they wanted to develop and compete with other countries on a global level. But because of the socioeconomic disparity between different counties we have seen how so many natural resources have either been depleted or not been used at all. Most developed countries have the money and the technology to extract these resources and use them to their fullest whereas developing countries are still struggling with this process.

Though today globalization has made it possible for ease of accessibility of natural resources around the world we are still dependent on those countries that have the most amount of natural resources. Let’s take for example the middle east who has an abundance of fossil fuel which even in the twenty-first century is extremely crucial. Countries have started using more viable options that are more eco-friendly and this is possible because of the technology advancements but this means that those countries that are still dependent on these natural resources will fall back.

Coal mining and the availability of iron had helped make Britain one of the most developed countries at the time and one of the richest nations too. This allowed for the industrial revolution to take place and similarly, this had made France, America, and other nations into such superpower nations. So using these natural resources had progressed so fast but that was in the past, now the country’s economy is based on so many different factors. It does need to use up its natural resources because there are many alternatives to non-renewable resources like fossil fuel like electricity. It is of grave importance that nations come to understand this and make the right moves so that they don’t suffer as much in the future.

As we move to an unsure future we must consider our future generations and how we can still provide them with so much by just conserving and wisely using our resources. technological advancements have made it possible for us to use different resources and create products that cater to our needs, but we should be aware of how precious these resources are to the earth and our future generations.