Nationalism Essay: Nationalism is a term that has been used frequently nowadays by media outlets, politicians, journalists and the common man. It is disappointing to say that the term and the meaning for nationalism have been taken out of context and misunderstood by certain sections of society that has led to showing nationalists in negative limelight. In this nationalism essay, we shall be talking about what nationalism is, how important it is for a country to survive and certain examples of what has happened with aggressive nationalistic countries.

A country is run by its people. And to maintain unity in diversity for the country, there should be a sense of belonging inculcated amongst the citizens towards their country, and nationalism does exactly that. There is no one particular definition of nationalism, but the popular discourse is that nationalism is an ideology or set of beliefs that the people of the country follow to promote the interest of the nation above anything else. Usually, nationalism and patriotism are used as synonyms.

While both the terms help in developing a sense of love towards the nation, they both are fundamentally different. Nationalism is about the interest of the country, from economic development to cultural and social status, but patriotism, on the other hand, is more towards the love and affection for the country in terms of military power and defensive capabilities. While there is no prescribed definition for both the terms, the context with which nationalism and patriotism are used is quite different.

On the other hand, aggressive nationalism, usually called as jingoism, defeats the whole purpose of nationalistic feelings. Jingoism is less about developing a sense of belonging towards the nation among its citizens, but more about war-mongering and propagating hate towards enemy countries. Aggressive nationalism does not entertain critics and dissent. It is a one-sided sentiment, which does not, and more importantly, should not have a place in a democratic and a secular country.

The nationalism during the early 19th century was about gaining independence from the British. Nationalism then didn’t divide Indians into any lines. It developed a true sense of patriotism amongst the people and motivated them to come out on the streets and fight against the British’s atrocities on Indian soil. But the nationalism that we witness now is different from the previous one and not is a good way. Nationalism, due to misunderstanding by certain sections of the population, has made it a synonym for hate-mongering and communism. Nationalism now is being compared with religious and ethnic sentiments of people.

Nationalism has absolutely nothing to do with culture, religion or ethnicity of the people. Unfortunately, nationalism, instead of developing a sense of belonging in the people, has developed fear in the crowds, especially for the ones with dissenting and critical voices.

Nationalism has been turned into a tool and litmus test for people’ patriotism. This form of nationalism is sowing seeds for diving the country on ethnic and religious lines. Such type of nationalism, which create hate and animosity amongst the people against the ruling dispensation can no more be called nationalism. Its pure jingoism, which is harmful to the unit of the country.

Elections are fought in many counties in the name of nationalism. Leaders like Donald Trump, Vladamir Putin and Narendra Modi are proud nationalists who have propagated nationalistic feeling amongst the people to win their support. While this is good for the nation, but it is the responsibility of these leaders to make sure that nationalism is not turned into jingoism. 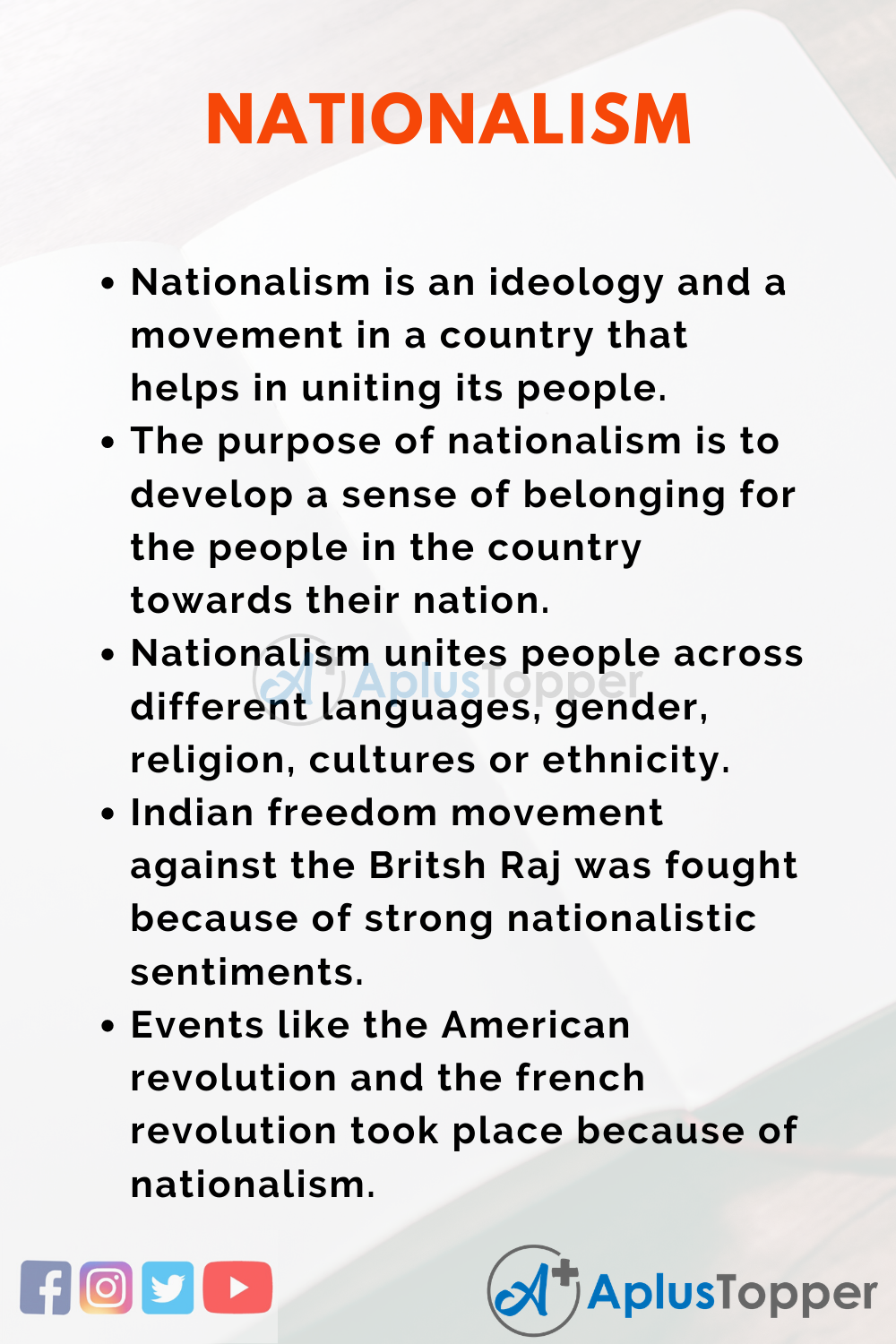 You can find below a short nationalism essay in English with a word limit of 200. This can be used by students and schoolchildren for essay writing, test, assignment, project works and examination.

The tallest leaders in India such as Mahatma Gandhi, Jawaharlal Nehru, Sardar Vallebhai Patel or Indira Gandhi were all nationalist leaders who put their country first and everything else was of secondary and tertiary priorities. The nationalism was shown in its pure sense all throughout the 19th century. But the terms nationalism was understood differently by the people at the turn of the country.

In the 20th century, the feeling of nationalism of the people of the country was taken advantage of and used to win elections and spread hate and animosity among certain sections of people. Nationalists of India need not necessarily hate people from Pakistan. Loving one’s own country does not mean he or she should hate another country. This misunderstanding has led to a widespread war mongering situation, not just in India but elsewhere in the world as well.

This form of hate-mongering and the aggressive nationalism is referred to as jingoism. Jingoist in the USA hate Russians and vice-versa. The same things hold true of jingoist in India and Pakitan. People should understand the difference between nationalism and jingoism and spread love and positivity in the world. One thing we should remember is, we are all humans before being Indians or Americans.

10 Lines on Nationalism Essay in English 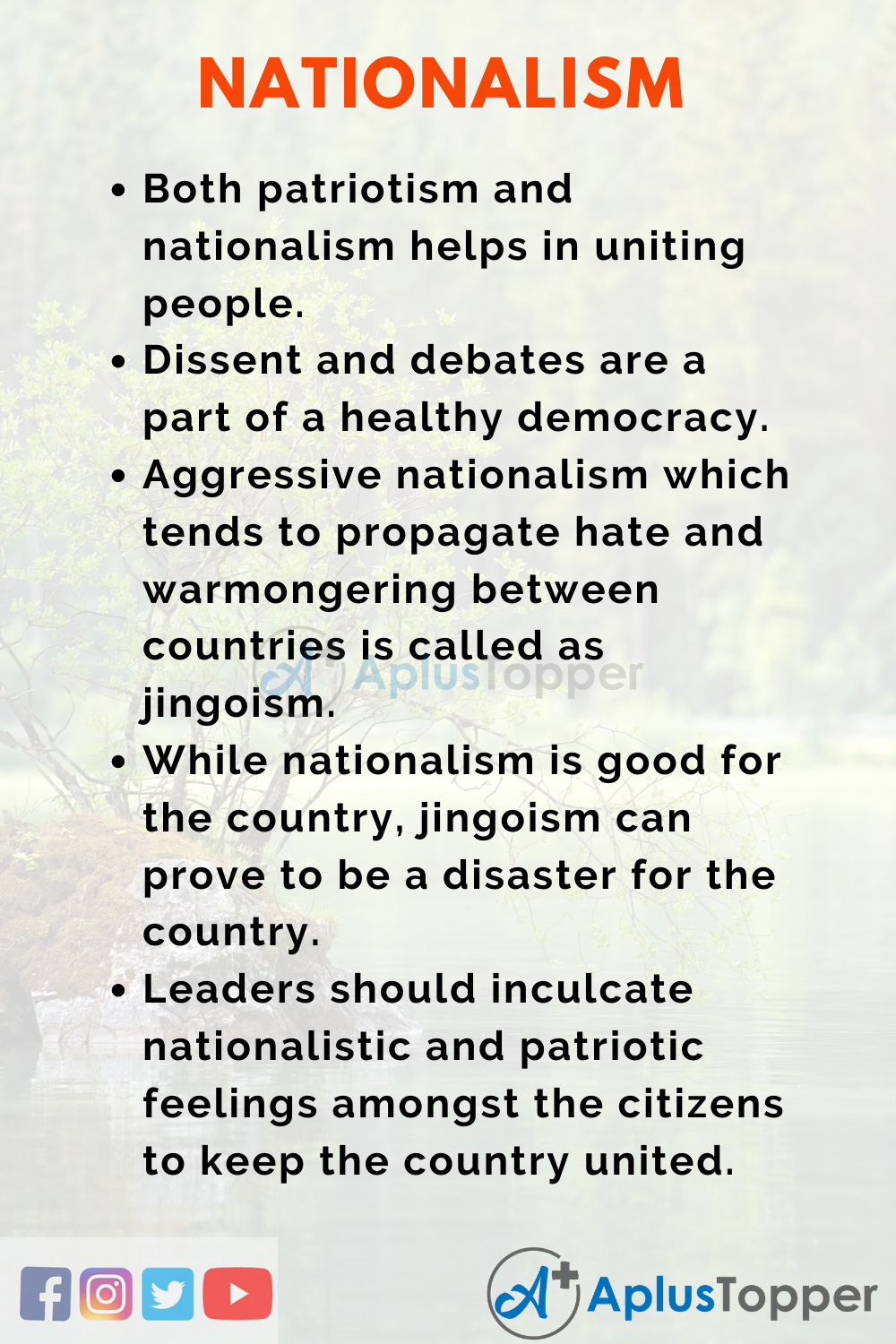 Question 1.
What are the two types of nationalism?

Question 2.
Is nationalism good for a country?

Question 3.
Who is the father of Indian nationalism?

Answer:
Bal Gangadhar Tilak is known as the father of Indian nationalism

Question 4.
What is jingoism?

Answer:
Aggressive nationalism that harms the people of the county is called jingoism