My School Fest/School Carnival Essay: My school fest was one of the biggest celebrations in the city and not only did we call people from other schools but politicians, actors, sportsmen and a lot of other celebrities were called as guests for our school fest. We as students used to practice and prepare for at least three to four months before the date of the fest for a variety show of talents such as dance, singing, music and arts.

Each and every person on the campus whether it is a teacher or student or worker or non-faculty worker were excited about our school first. Hence in this My School Fest/School Carnival Essay, I am going to talk about my experience during my fest.

My School Fest/School Carnival Essay is usually given to classes 7, 8, 9, and 10.

My school first was usually held in the month of February just before our summer holidays but the preparation for the same used to start long back in the month of October. So it would take almost 4 months of rigorous preparation to conduct are three-day fest. Our school first is not just fest or a simple carnival, it was a celebration of sorts in the entire city.

Our school fest was so big that the entire region around our school was barricaded and police were called in to manage the public who were invited for the fest. Unlike other school fests where there would be just dancing and singing by students, our fest was a mega event where singers, dancers, Bollywood actors and actresses were called in to perform. As I said, it was not like any other school fest, it was a huge phenomenon and a big Public Relations event for our school.

Other than the dancing, singing and extravaganza it was during this time that the prizes for winners in sports, entertainment, academics, extracurricular and co-curricular activities were distributed to students. The prize distribution was in itself a whole day event and it was usually done by the chief guest of the event who will usually be the chief minister of the state or the governor of the state. I personally received many prices in sports and academics from the governor of the state of Karnataka.

The dancing, the singing, the lights, the arrangements, the food and more importantly the fun memories with my friends is what makes my school fest the most memorable part of my childhood. I remember how I used to collect money from my parents, neighborhoods friends and other schools to conduct our fest. Almost more than 75% of the funding came from our school authorities but the management wanted to students to learn the concept of crowd funding and as a result of which students use to collect money from various sources to conduct this fest. The responsibility of crowdfunding was usually let on the shoulders of seniors of class 10 and class 12.

The students from class 10th and 12th used to go around the city to visit educational institutions and certain companies and ask them to donate money. Our school fest was not just about dancing, singing and gala events, it was also about developing a sense of social responsibility among the kids. Our school had more than 2000 students and each of them was asked to plant a tree around the school premises on the day of our fest and water the plants every day. This is a wonderful concept because when I was in the first standard I had planted a plant and now that I am in 10th standard I can see how the plant has turned into a tree. So, the way I have grown up the tree also has grown with me.

There are plenty of stories that I can talk about my school fest and a simple My School Fest/School Carnival Essay will not be sufficient. Most of the credit in conducting this fest goes to those workers and non-teaching faculty in our school who put extra hard work in ensuring that this fest is a success. One good thing about our school fest is that students from other school are jealous of our school because of the size of our school fest. 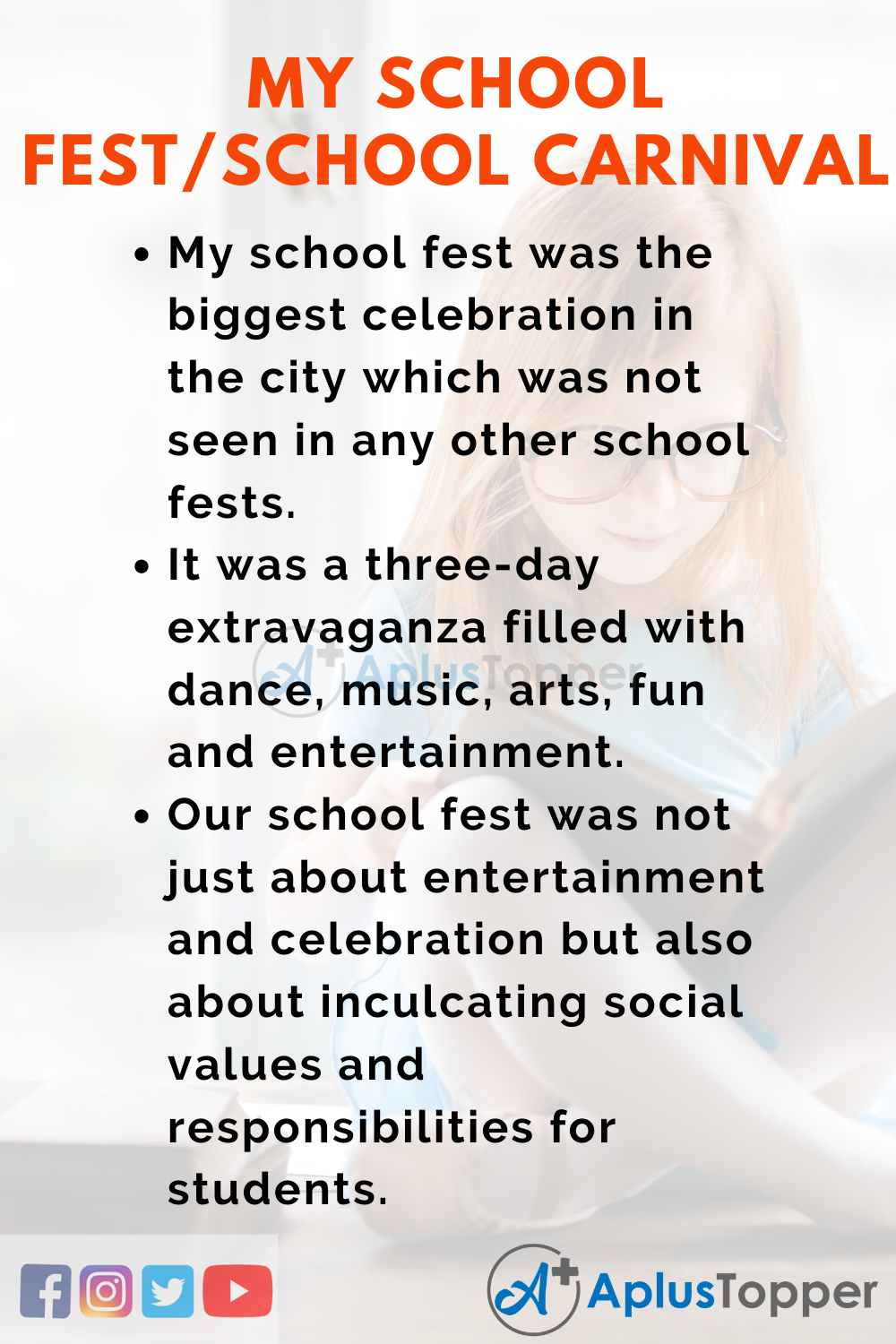 One of the most memorable time of my school days is my school fest. It was a three-day extravaganza filled with dance, music, arts and entertainment. Our school fest was not like any other fest where only students and teachers perform. It was a kind of fest which looked like an international concert because many Bollywood celebrities and important figures in the city were invited as chief guest. It was maybe because of the popularity of our school that a lot of celebrities used to visit our fest in those 3 days and as a result of which we used to gather a lot of crowds so much so that police had to control outside our school. Many alumni of our school were big stars in the fil industry as well.

Notable celebrities like Shankar Mahadevan, Sonu Nigam and Kapil Sharma have visited our school fest and performed. It is a matter of pride for all the people in our school including students, teachers and workers who are part is one of the biggest celebrations in the city. Students prepare for more than 3 to 4 months to perform in that 3-day fest. I remember I performed a solo dance on the second day and I can say with confidence that it was because of such fest in our school that stage fear was eliminated in me. Participating in such fests helped me build my confidence, character and team playing abilities.

10 Lines on My School Fest/School Carnival Essay in English 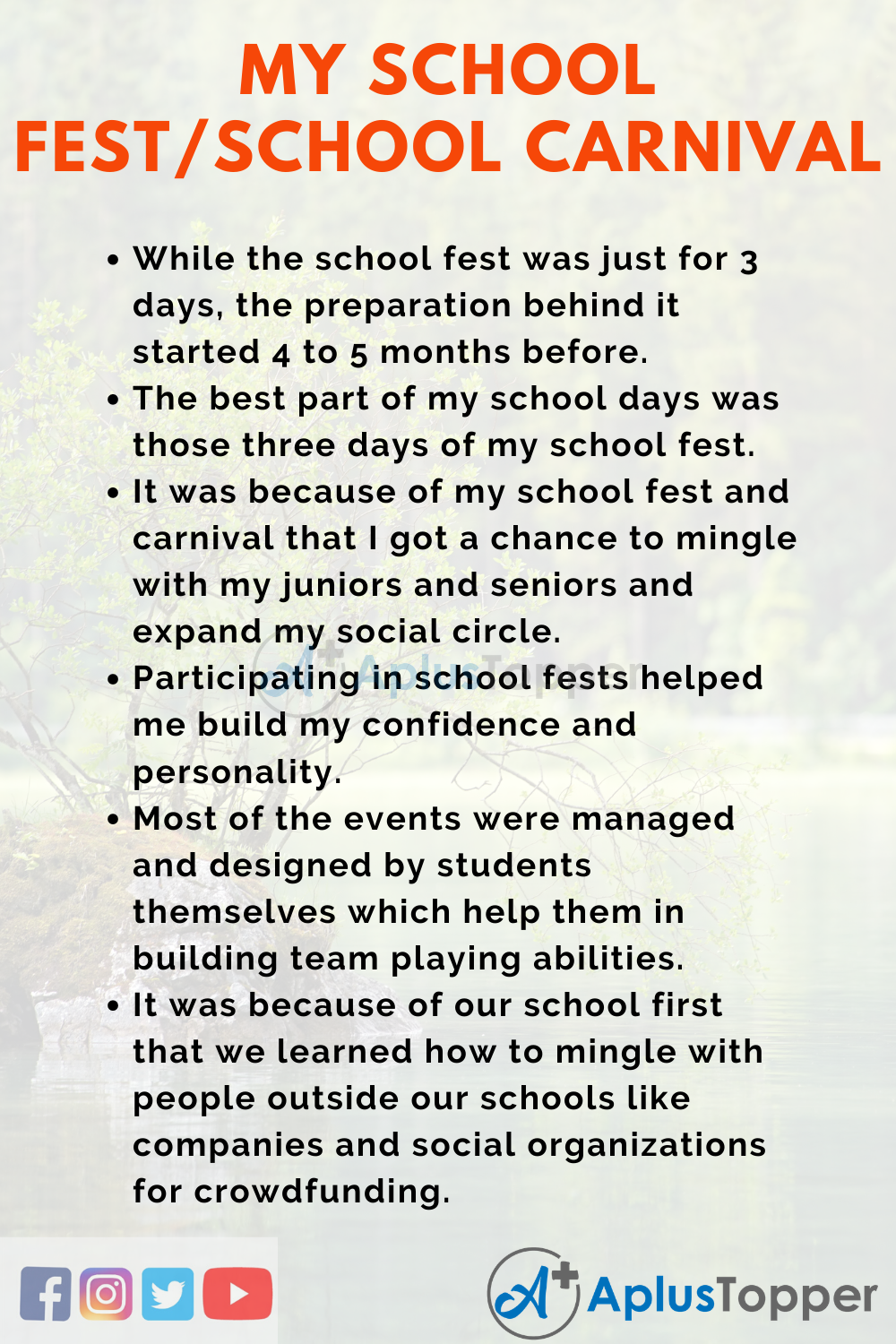 Question 1.
Why are School fests important?

Answer:
School fests are important for students to build team playing abilities and confidence and eliminate stage fear. It also helps them to mingle with different people outside their comfort zone.

Question 2.
What’s the most memorable part of your school days?

Answer:
Participating in school fests and annual day celebrations was one of the most memorable parts of my school days.

Question 3.
Why should parents and teachers encourage children to participate in school fests and Annual Day celebrations?

Answer:
It is important for parents and teachers to encourage children to participate in school fest to help them find their ambitions and talents and also eliminate any kind of stage fear.

Question 4.
What are the two types of school fests in your school?

Answer:
The two types of school fests in our school was an intra-school and inter-school fest