My Favourite Game Essay: Playing games are an essential part of education and development. Playing games builds an assertive attitude towards learning. There are different kinds of games played in our country. Games are divided into two classes – outdoor and indoor games. Chess, cards, ludo, and carrom are indoor games. Hockey, football, cricket, basketball, tennis, badminton are outdoor and foreign games. Kabaddi, hunting, wrestling, horse riding, swimming, ball fighting are long outdoor games, but they are Indian ones.

In this essay on my favorite game, I am going to talk about the game I love the most.  Here, we have broken the essay in paragraphs to help you prepare speech in both long and short topics on badminton.

Short Essay on My Favourite Game 150 Words in English

Games are necessary because they help develop and grow the body and the mind, whether in an educational environment or at home. Playing games has always helped me in being active, energetic and healthy. It is an imperative part of my daily life. I love to play a lot of outdoor as well as indoor games. Badminton is my favourite game as it helps me to stay active the entire day. One requires speed, strength and precision to play badminton. Playing badminton helps me to be active and energetic. One needs a lot of practice and hard work to become a good player in this game.

My first badminton match was when I was 12 years old. I was taken to the stadium to learn this game, and since then it has become my favourite game. I endeavour to play it rather than going out or playing video games. While playing badminton, we need two rackets and a shuttlecock. The shuttlecock acts like a ball, which is made of feathers appended to a small piece of cork. On the other hand, the badminton rackets are light in weight. Badminton is like tennis; the only difference is that the net is higher and the ball is lighter. 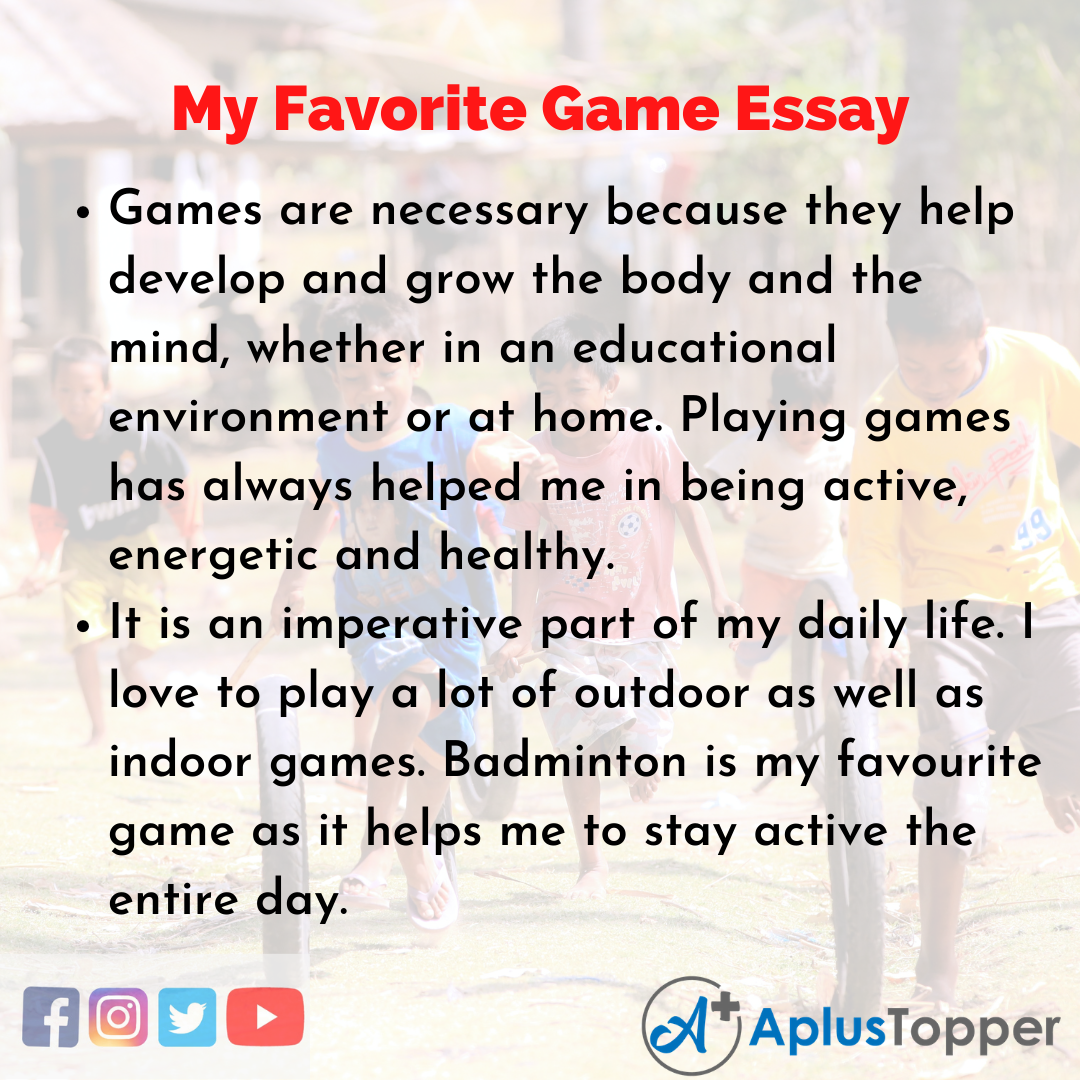 Long Essay on My Favourite Game 800 Words in English

Games are an essential component in every person’s life. Playing a game can directly affect our physical health, weight, height, and also gives us the strength to fight off disease. It also helps us to stay active even when we get older. Encouraging outdoor games will also benefit us to develop a healthy perspective on managing an active lifestyle. The game which I love the most is badminton. It has helped me to be healthy and energetic. Badminton is played with a lightweight racket and a shuttlecock.  The badminton game was derived from Duke of Beaufort’s House in England, where the first game was played.

Here are some insights into my favourite game and the rules and regulations followed globally.

Playing games is a vital activity for every human being. It keeps a onefit. Moreover, it keeps people away from all the diseases. Having a physical hobby is essential for every person. Most importantly, a lot of nutritionists and doctors suggest it. Some of the interesting games are cricket, basketball, football, tennis, badminton, etc. My personal favourite game is badminton.

My favourite hobby is playing badminton, which is a very interesting game, and it always turns my enthusiasm. I started playing badminton when i was 12 and won my first tournament when I was 13. After that, I continued on to win several more matches throughout the years until I was 20 when my career took over. However, I occasionally pick up my racket for informal gatherings with friends.

Although the game was invented because of its integrity, its complexity can never be grasped by even the world’s greatest players. It is the fastest shuttle sport and holds a world record speed at 493km/h, played in a court of 6.1 metres wide and 13.4 metres height. The time provided to regain a shot hit by a player is down to the milliseconds, and yet, many can regain a shot entirely at the spot the opponent wants the shuttle to go.

As an individual, going through the gruesome training for years, the stress one endures when the whole team comes down to winning or losing, is a feeling unimaginable. It has helped me grow remarkably, and I am grateful to my parents for introducing me to this sport. By playing this game, I have learned that losing or failing is not the ultimate goal. It helps me to endure stress psychologically and physically and have a great mindset and a positive perspective.

There are some very important rules for playing this game, such as the game starts with a coin toss. Whoever wins the toss gets to choose whether they would receive first or serve first or on what side of the court they want to be. The player cannot touch the net with his racquet or his body during the game time. A player should not strike overhead the net to hit the shuttlecock.

Mental  aspects of the game

Being a badminton player always helped me to stay mentally fit. Almost every badminton player is qualified in the physical aspect but are not strong enough mentally. A badminton player can possess all the robustness, stamina, dexterity and skills but without the ubiquity of mental toughness, they can be stirred mentally anytime or anywhere.

An established badminton player will never go down without a struggle and should be able to maintain their speed and the sharpness of their shots until the very endpoint in the match no matter how long spun they have performed. This is where mental toughness plays a significant role. It has been demonstrated conclusively that motivation helps to transcend in a big platform, which differentiates champions from others. It is the same as the hare and tortoise story, where the motivation to do consistently well was the sole factor that the tortoise followed to beat the hare.

Similarly, it is imperative for us to understand that playing badminton is not a battle and losing in a game is not a sin. We can always wake up the next morning to perform a better game. Therefore a little motivation and some mental toughness can help us play the game competently.

Despite losing out to lucrative sports like cricket, badminton in India is a broadly watched sport. It is a very popular sport, and its popularity has grown manifold in the past decade. By winning the All India Open in the year 1980 and becoming the number one ranked player in the world, Prakash Padukone started a rich legacy for Indian badminton. He was followed by Punnela Gopichand when he won the same championship in the year 2001.

The women Athletes led the Indian badminton triumph journey in the 21st century. Saina Nehwal is the first women badminton player from India to ascend to the number one ranking. She also became the first-ever Indian Player to win an Olympic Medal in London Olympics 2012. Saina Nehwal was succeeded by P. V Sindhu who became the first Badminton player in India to feature in the Olympic Final. She also became the first Indian to win the world championship in 2019 Basel. All of this makes me overjoyed and heightens my interest in this beautiful game in which my country has been consistently doing better. 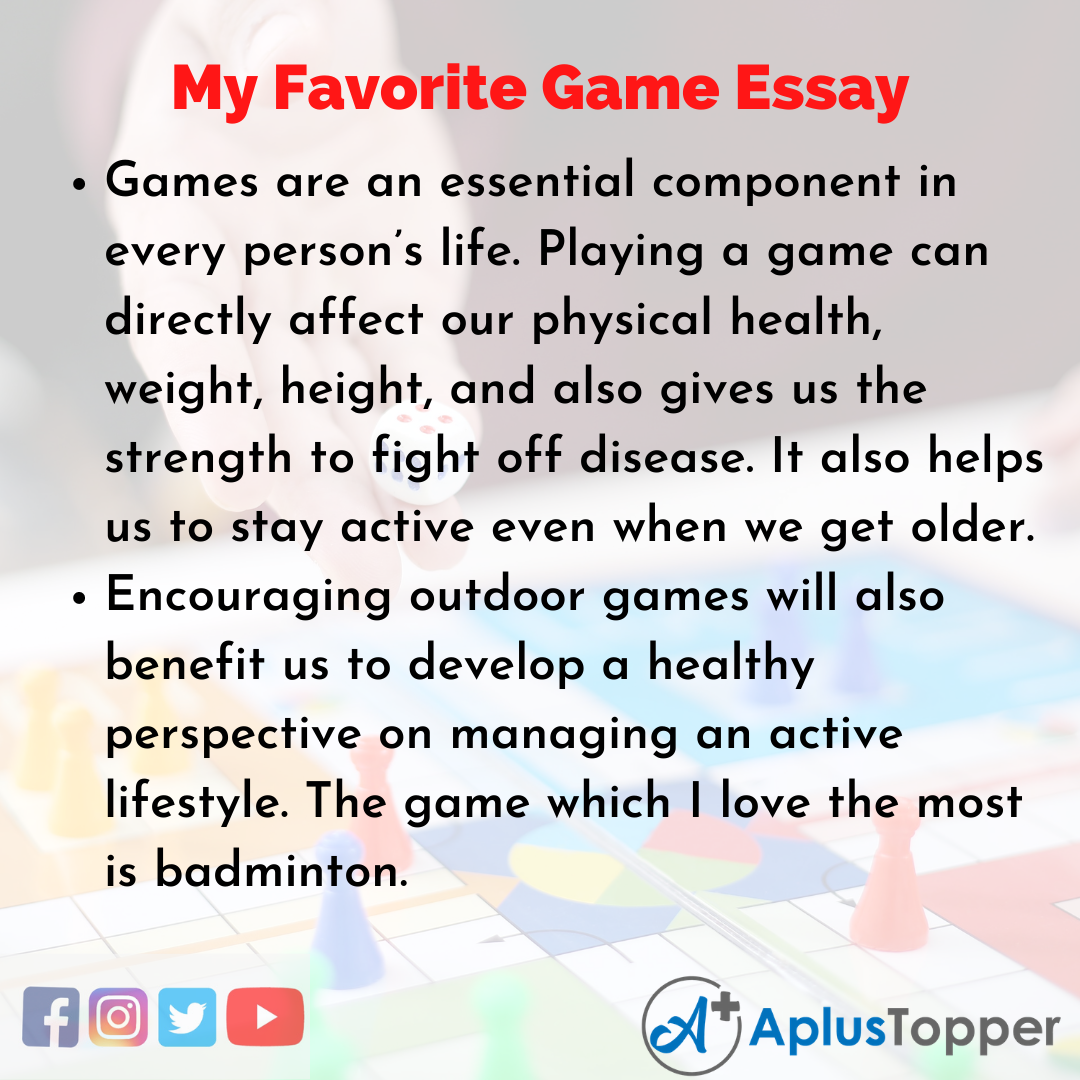 The badminton game has always been close to my heart. Many of my friends, family and acquaintances are involved in this game in one way or another. This beautiful game has brought each one of us together. No matter how much life evolves and there is a change in the personal purposes everyone will keep coming back to this game, such as its beauty and exhilaration.