My City Essay: Cities are urban set-ups that provide us with a shelter and a livelihood. Almost every individual has a constant emotional connection with their towns. As we grow up, our cities become a part of us, an indispensable component that plays a significant role in building our characters and attitudes towards people and situations. Or cities sustain us and make us who we are.

In this article, we have provided a detailed essay, a brief essay, and ten lines on the topic, my city, to help students write such pieces in their examinations. Given below is a long essay composed of 500 words and a short essay comprising 100-150 words on the topic in English.

Long Essay on My City 500 words in English

Kolkata has always been the city of joy and happiness. Kolkata has a rich cultural background, and the heritage associated with my city makes it valuable and beautiful. Kolkata, previously known as Calcutta, was the capital of India during the British rule. It is a city that has a rich cultural history and is the intellectual hub of India. The British made Calcutta the capital city because it was the center of education, business, and economics. Kolkata has produced brave hearts, which have fought our National Struggle ever so courageously and have helped get freedom from the British.

My city is unique, and it amazes me to think of how wholesome Kolkata truly is. It has everything one can wish for, and its people have a secure attachment to their city. Kolkata is famous for its lip-smacking food and ancient monuments, and it is also known as the City of Joy. Kolkata is the city of emotions and festivities.

Kolkata has her essence. Not everybody will recognize her true beauty. It is not as technologically advanced as Bangalore or as posh as Mumbai, but Kolkata is a city with a soul. She will touch you in ways unknown to humankind and will give you the solace you have always craved. Kolkata is excellent as a city. You can never get tired of Kolkata. Living here is like pursuing a long lost dream of culture and inheritance. Kolkata shapes you in the classiest ways possible.

Heritage colleges like the Presidency University, Rajabazar Science College, Jadavpur University, etc. ensure that students get an excellent education. Kolkata has tremendous patriotic fervor, and it was where the first students’ movement began. The colleges teach moral values besides academic curriculums. Students know what god for their country is.

Kolkata was also the central hub of the Naxalite movement. The city shapes people in a way that they refuse to accept injustice. Kolkata has a strong political base, and the people here would do anything to stand up for what is right. Apart from the educational role, Kolkata also has advanced business centers. Every year, a business meeting is organized in Kolkata, and the economy is strengthened.

My city has countless spectacles. Sitting by the river Ganges on a chilly winter night, staring at the city lights on the other side as cars and buses rush past us is surreal. Be it the iconic Rabindra Setu or the Dakshineshwar Temple, Kolkata has many structures that have endured the ravages of time.

Coming to historical monuments, Kolkata is home to the famous Victoria Memorial, which is one of the most celebrated monuments of all time. The Indian Museum, located near Esplanade, is again a structure that has mesmerized tourists. The Indian Museum is an excellent source of research and has countless wonders.

My city has woven its members in a string of love and values. Kolkata accepts everyone. The ever welcoming Academy Gates has given place to all artists with out-stretched arms. The smell of freshly brewed coffee in roadside cafes, the awe-striking Christmas decorations in Park Street, the inevitable Nostalgia in Coffee House, and the flood of amazing books in College Street, every bit of Kolkata inspires us to love ourselves and be better human beings. Short Essay on My City 150 words in English

Kolkata is a city of wonder and amazement. It has countless marvels and beauty. To start with, the Shahid Minar is a world-famous monument dedicated to the Indian Freedom Struggle martyred soldiers. College Street is the largest book market in India, and everyone can find their desired books on college street.

The nostalgic coffee house was visited by maestros and geniuses like Mrinal Sen, Manna Dey, Satyajit Ray and more. The nostalgia etched into the walls still reverberates with renewed passion. The Esplanade building and the St Paul’s Cathedral historical monuments are popular among tourist spots. Kolkata is enriched with art and literature and is indeed the most beautiful of all cities.

10 Lines on My City Essay in English 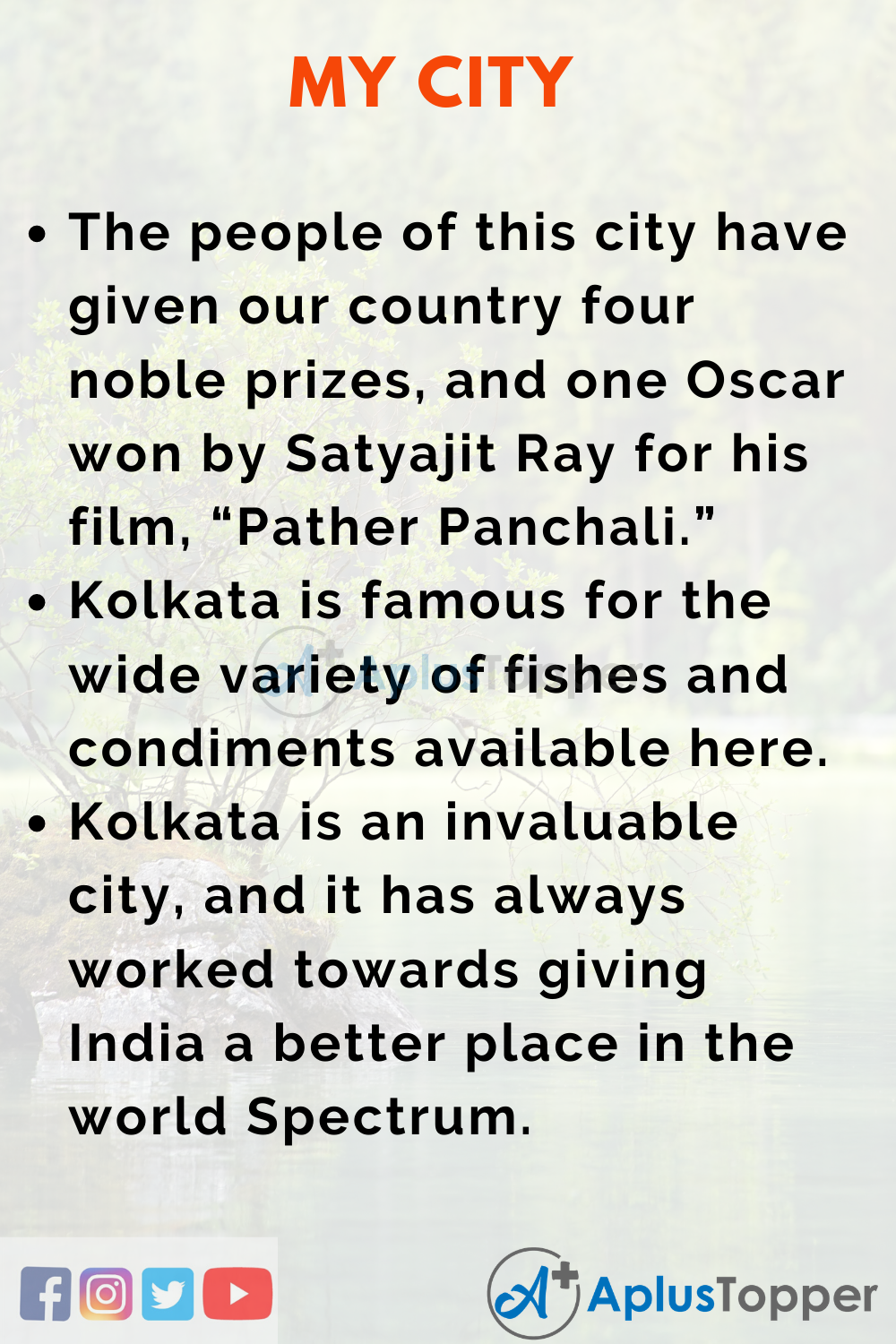 FAQ’s on My City Essay

Question 1.
How is Kolkata as a city?

Answer:
Kolkata is a beautiful place to live in and offers various privileges. It has something for every taste and is undoubtedly the city of joy and vibrancy.

Question 2.
What are the health facilities available in Kolkata?

Answer:
Kolkata has renowned doctors and hospitals. It also has government hospitals that offer free treatment for underprivileged people.

Answer:
Kolkata is as safe as any other part of the country. Every city has crime circuits, and so does Kolkata. The safety of women is, however, greatly endangered.

Question 4.
How can I find a proper city to settle?

Answer:
Searching for a proper city must include its job opportunities, medical facilities, administrative standards, and educational options.