Essay on Motherhood: Motherhood is the phase of being a mother and often comes with a lot of difficulties. Motherhood is nurturing and loving one’s child deeply without any expectations. Motherhood has many cultural references also.

Motherhood creates many responsibilities and often changes a woman as a person. It is considered the greatest gift of God, according to many cultures. It embraces the circle of knowing ones’ child and understanding them from a mother’s perspective.

We are providing students with essay samples on a long essay of 500 words and a short essay of 150 words on the topic Motherhood for reference.

Motherhood is said to be the purest form of human existence, and the essence of motherhood has been described differently by people. Motherhood affects every woman differently, and it must be equally respected. Mothers can be managing household chores and take care of their child at the same time or create a balance between their work life and their child’s responsibilities.

The biological process of giving birth does not signify motherhood. Many women have given birth to their child and have taken the responsibility of the child in a very profound sense. In other cases, women may have given birth to babies and have abandoned them due to some reason.

Many women have adopted someone else’s child and have nurtured them and loved them unconditionally and have become responsible mothers. Thus, the biological process does not imply to motherhood, but the love and affection given to a child are what motherhood is all about. The care, responsibility, behaviour and affection for a child is the true essence of motherhood. For a child, his/her mother is the person whom they will look for in difficult times. A mother is the most important person in a child’s life when it comes to assurance and a matter of security. In many cases, the child idolizes the mother and often exhibit similar traits.

Motherhood encompasses the stages of being a mother and raising the child. There are phases where mothers are caregivers, and a child is nurtured with unconditional love and affection. For a child, a mother is the most special human being in his/her life, and she is the best friend one can ever have. Mothers are the first mentors, and a child gets inclined to their mothers mostly. Motherhood is all about new experiences. It transforms a woman entirely, and this progress about keeping her child’s happiness and struggles as the topmost priorities. Mothers are the most selfless beings, and every day is a new learning experience.

Motherhood includes acceptance of their children as who they are and giving them unconditional support. It involves a mother’s firm guidance in the child’s journey in life and the struggles he/she faces in this unruly world. A child’s vision of the world is a reflectance of the mother’s perspective mostly. There are many debates about motherhood from a feminist viewpoint. Constructed in patriarchy, the concept of motherhood includes underlying social practices that restrict women and later considers as acts of selflessness as stated by the critiques.

Mothers are human beings too, and being selfless does not make someone great. A mother must take care of her own physical and mental health along with that of her child and must look for activities and things which enhance her growth as a person and that solely does not need to be her child.

Motherhood encompasses all the phases of life, hopes, dreams, acceptance, failures, disappointments, repentance and forgiveness. It includes perseverance of a mother to raise her child for upcoming life trials and to show the next generation, the various ways of life. 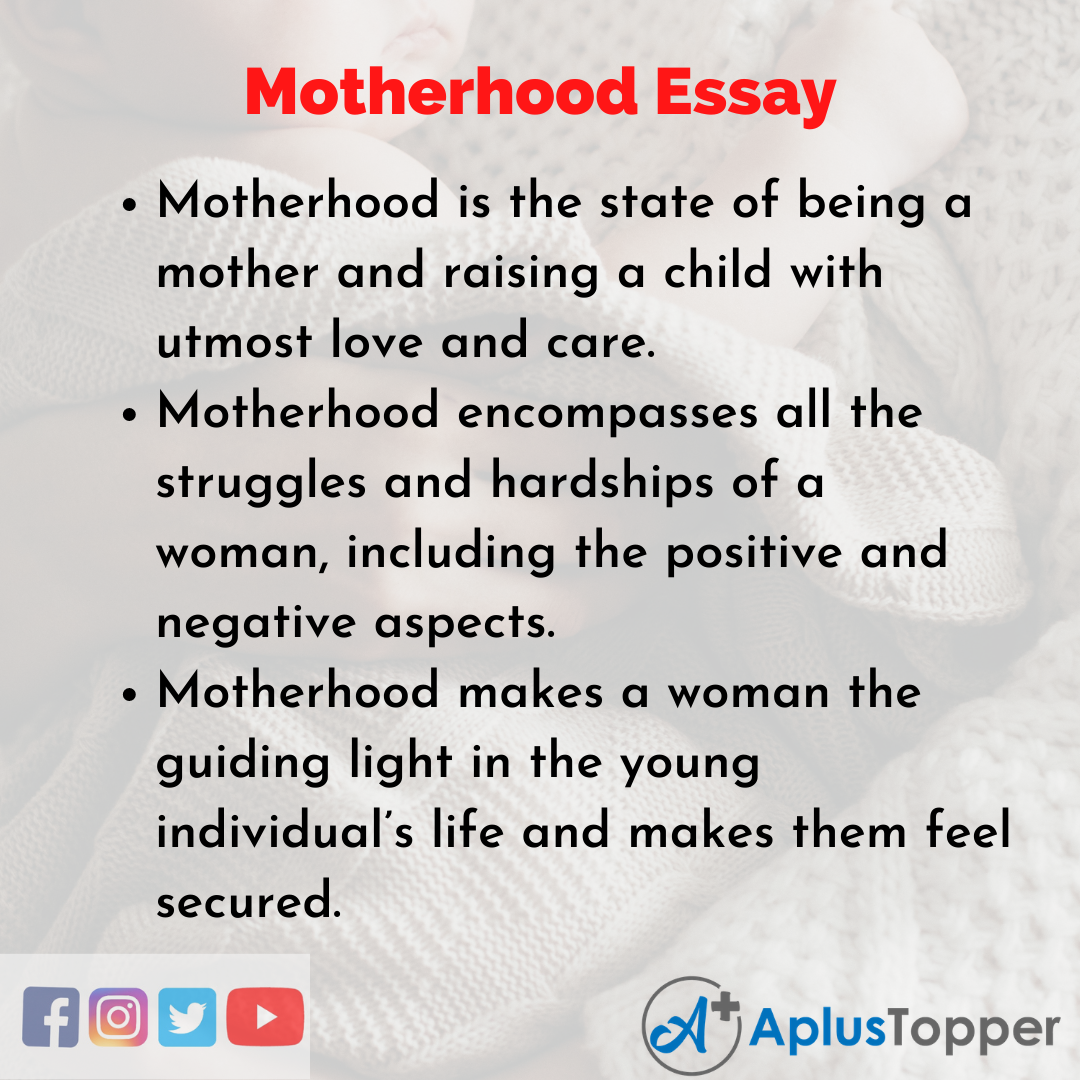 Motherhood is the start of a new phase in a woman’s life as she gives birth to a child. It includes all the responsibilities of nurturing the young individual and giving them proper care and affection. Motherhood also involves constant guidance to this young individual to overcome everyday struggles and upcoming challenges as he/she grows up.

Motherhood is the best gift of God and mothers are the most special person in an individual’s life. Being a mother comes with a lot of struggles, difficulties and compromises. She has a lot of perseverance and gives a sense of assurance to her child for survival. Motherhood also implies acceptance of the respective child as who they are and giving them utmost attention.

Motherhood refers to the understanding of the psychology of a child from a mother’s perspective. Mothers know their child the best and always look for ways for better upbringing of the child. As a child, individuals are most attached to their mothers, and motherhood is all about the little joys, hopes, dreams, failures, repentance and forgiveness.

Motherhood means embracing the flaws of their child and accepting their imperfections. Thus, the children get a mental strength so that they can overcome the difficulties and the best mentor and guiding light in this, are the mothers.

10 Lines on Motherhood in English 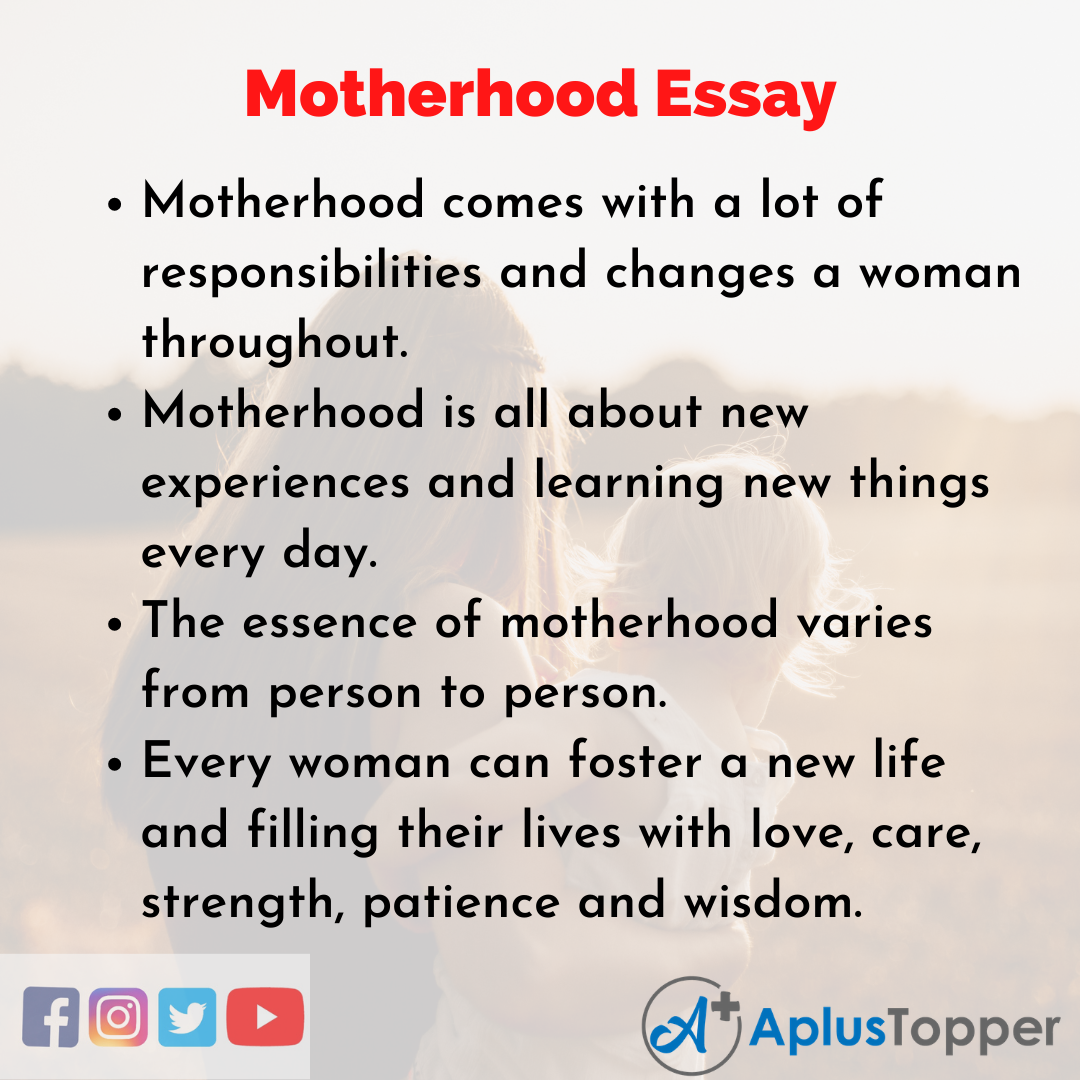 Question 2.
Does motherhood change a woman?

Answer:
Yes. The woman becomes more responsible and dutiful after becoming a mother.

Question 3.
Why is motherhood so important in society?

Answer:
Motherhood has some stereotypical cultural and societal myths which often pressurize a married woman to give birth.