Mother Tongue Essay: The first naturally acquired by humans is their mother tongue. The mother tongue is associated with the language that a child’s parent use to communicate with them, or the common language of the place a person is born and brought up in is called the native tongue.

We are providing students with essay samples on a long essay of 500 words and a short essay of 150 words on the topic ‘Mother Tongue’ for reference.

To suffice human’s social need for more effective communication the language was created. The extremely complex or versatile code, i.e. language, is used to express our thoughts and experiences to other people. This makes language a natural phenomenon that is learnt by a human at an early age for the desire to express themselves to others.

The mother tongue or the native language is an essential aspect in one’s upbringing as it shapes the way they perceive the world and the way one expresses themselves to others. Babies tend to imitate what they see or hear. Infants are fast learners as they acquire their mother tongue by imitating their parents. It is easier for children to learn languages in their growing years than in comparison to adults learning a new language.

Having a strong grip on one’s mother tongue also helps in creating a strong foundation for learning additional languages. Children are capable of learning languages other than their native tongue while they are young by transferring the different structure of a language to other languages. If a child learns the grammar of their mother tongue well, then they will be able to guess the meaning of the words in different languages easily.

Since people from different regions have varying mother tongues, that is why many institutions and parents teach a second language to children so that they can communicate with more people, without any language barriers. A person might be able to converse in multiple languages, but if they are spoken to in their mother tongue, then a sense of familiarity prevails over them.

You can now access Essay Writing on the topic of Mother Tongue and many more topics.

One’s mother tongue is a very potent tool that helps in advancing the learning skill in people. Children’s develop the skill of communication by conversing with their parents in their native tongue. And this skill of communication becomes paramount in school or institutional level setting for participating in class. Learning in school plays an important role in accentuating the use of mother tongue.

Similarly, when parents spend time communicating in the native language for discussing matters and telling stories to children, it helps in developing their terminology and concepts. Thus, children are able to follow instructions and can learn effortlessly, resulting in educational success.

The native tongue starts shaping a person’s thoughts and emotions soon after they are born in their subconscious because a person first hears it in their womb. The personal and cultural identity of an individual is developed because of their mother tongue. By understanding oneself, their surroundings and their history, personal identity can be built.

It is sad to see that mother tongue is losing its importance in comparison to some popularly used languages like English. Since in education as well as international business, English is used, that is why people are more encouraged to learn it because of the existing competition. 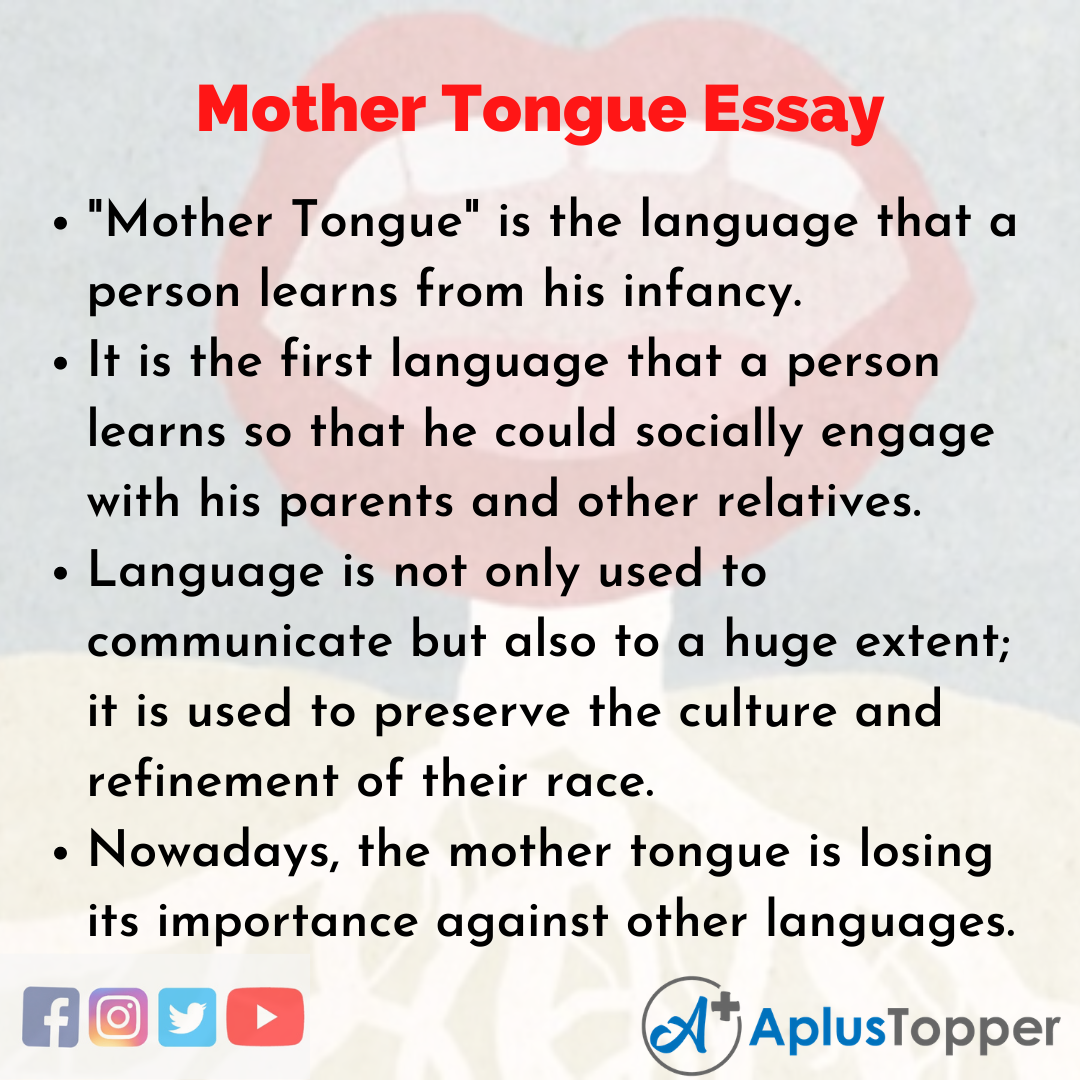 A person can be defined by the choices they make and the language they speak. And the first language learnt by an individual is said to be their mother tongue. The native tongue plays a very important role in a family as it falls under one of the basic family values.

The mother tongue is often passed onto a child from parents or family members. The learning of a language opens up several new possibilities for an infant to explore the world and to express themselves.

There are several benefits of knowing more than one language, especially when working outside one’s hometown. However, on being addressed in the mother tongue in a foreign city helps the conversation reach one’s heart because of nostalgia.

Several pieces of research conducted by psychologists showed that people react differently when shown words of their mother language in comparison to when shown words of other known languages. Hence, we can conclude by saying that the importance of the mother tongue is undeniable.

1. “Mother Tongue” is the language that a person learns from his infancy.
2. It is the first language that a person learns so that he could socially engage with his parents and other relatives.
3. Language is not only used to communicate but also to a huge extent; it is used to preserve the culture and refinement of their race.
4. Nowadays, the mother tongue is losing its importance against other languages.
5. Although English is incomparable with any other languages, it is causing the death of some of the languages.
6. The inseparable part of one’s personality that should never be lost is their mother language.
7. To preserve the rich cultural aspect of a person’s existence the mother tongue should be preserved at any cost.
8. Mother tongue is very crucial for framing one’s thinking and emotion.
9. Learning one’s mother tongue gives them a sense of self-worth and cultivates confidence in them.
10. For a child to be able to participate in their own classes and grow communication skills, the child must learn his mother tongue from his parents. Question 1.
Why is this called Mother tongue?

Answer:
Mother tongue is actually a metaphor. Language’s origin comes from the primary caregiver, or the person who looks after her baby when he is born is traditionally known as mothers.

Answer:
Mother tongue in education alludes to when an educational institute adds the language a child is most accustomed with that is his mother language which he speaks in his home.

Question 3.
Can a child have more than one mother language?

Answer:
A child who grows up in a bilingual home may have more than one mother language or native language.

Question 4.
What is the main difference between mother-language and first language?