Mother Teresa Essay in English: It would not be inappropriate to call Mother Teresa, “The Saint of the twentieth century.” Bent down in poised grace, with her white sari draping her head, she was the very image of God’s love on this earth. During turbulent times like ours, in which the race for materialism has all but completely wiped out our conscientiousness, it was this apostle of love and mercy who became a beacon of hope for millions all over the world. Her inspirational selfless work for the homeless, the poor, the aged, the handicapped and the unwanted was nothing short of the manifestation of the divine self. Students can get to know about Mother Teresa essay writing, essay about mother Teresa, an essay on mother Teresa, an essay of mother Teresa,

Essay Mother Teresa was born Agnes Gonxha Bojaxhiu on August 26th, 1910, at Skopje. Her family belonged to the Albanian community. They were Catholics, though the majority of the Albanians are Muslims. Her father, Kole, was a widely traveled businessman. Her mother, Drana, was a housewife. They had three children of which Agnes was the youngest. When Agnes was nine, her father died. Drana had to look after the family. She started earning her living by sewing wedding dresses and doing embroidery jobs. In spite of these hardships, theirs was a religious family.

Every Time you smile at someone, it is an action of love, a gift to that person, a beautiful thing. 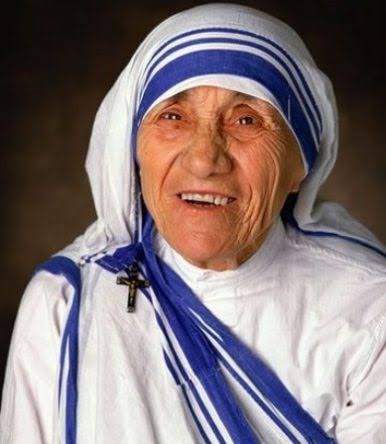 This spiritual upbringing had a deep impact on Agnes. As a little girl, she began to understand the quintessential meaning of the preachings of the Gospel and early in her life, she tried to put to practice what was preached. Her mother’s influence in molding little Agnes into a deeply caring human being cannot be undermined. Apart from taking care of her three children, Drana was much moved by the misery of an alcoholic woman in the neighborhood. She went to wash and feed her twice a day. She began to take care of a widow and her six children.

When Drana could not go, Agnes went to do this work. After the death of the widow, the children were raised in the Bojaxhiu household as a part of it. So it was this exemplary attitude of her mother that instilled in Agnes the love and concern for others. This was to become so much a part of her character that she left all other pleasures in her later life. She was to completely devote herself to the welfare of the poor and the needy.

It was at the age of twelve that for the first time, she felt a keen desire to spend her life doing God’s work. But she was not sure. Agnes was eighteen when the decision was made. For two years, she assisted several religious retreats in Lentice and it was clear to her that she would be a missionary in India. She then decided to join the Sisters of Our Lady of Loreto who were very active in India. On September 25th, 1928, she left for Dublin where the motherhouse of the Loreto Sisters is located. Here, Agnes learned to speak English and was trained for religious life. After receiving the Sister’s Habit, she chose to call herself Sister Teresa in memory of the little Teresa of Lisieux. On December 1st, 1928, Sister Teresa left for India to begin a new life.

After taking her vows at Darjeeling, Sister Teresa dedicated herself to the care of the sick and the needy in a small hospital. Later, she was trained as a teacher and became the headmistress of a secondary school in the center of Kolkata. Not only did Sister Teresa teach the students history and geography, but it also took time to get to know the children’s personalities and their families. So overwhelming was her concern for the children that they began calling her ‘Ma.’ Close to this institute, were the slums of Kolkata. The miserable appalling conditions in which the poor lived wrenched her heart. Sister Teresa could not turn herself away from such misery. Along with some girls, she would visit the slums and try to help out the poor in any manner that she could afford.

To clear her tormented soul and to look for direction, Sister Teresa went for a retreat to Darjeeling on the tenth of September, 1937. Many years later, Mother Teresa called it, “The most important journey of my life.” It was during that journey that she really heard God’s voice. His message was clear; she had to leave the convent to help the poorest of the poor and to live with them. “It was an order, a duty, an absolute certainty. I knew what to do but I did not know how.”

The tenth day of September is called “Inspiration Day.”

Mother Teresa was 38 when she took the vows of poverty, purity, and obedience. Giving up the Habit of the Sisters of Loreto, she took to wearing a cheap white cotton sari with a blue border. Sister Teresa then went to Patna to train herself as a nurse. She realized the importance of such training in her venture to help the poor who lived in dirty and unhealthy habitation. After completing her training, Sister Teresa came back to Kolkata and began her life’s vocation—to live among the poor and to help them.

Soon, she became a common figure in the slums and the streets of Kolkata. Her white sari, her fluent Bengali and her unrelenting effort to improve the hygiene and literacy in the slums, soon made her an endearing figure. Rising early at dawn, the Sister worked with dedication and inner spiritual strength that comes with sincere prayer. At this time, Sister Teresa, so sure of the virtue of her vocation, took Indian nationality. Her will to help the needy became stronger with each passing day.

With continuous work, their community grew. Soon, Sister Teresa began thinking seriously about starting a congregation. This was approved on October 7th, 1950. Thus, the constitution of the “Society of the Missionaries of Charity,” came into being. It was the day of the feast of the Holy Rosary. After five years, the congregation became papal as more and more Sisters joined the congregation and devoted their lives to the sick and the poorest of the poor.

At Kolkata, owing to their growing numbers, the Missionaries of Charity needed a residence. A Muslim leaving for Pakistan sold his house for a nominal price and this was to become the famous Mother’s House at 54 A, Lower Circular Road, Kolkata. While society grew, the Mother’s work kept on increasing. Her work among the lepers of India got her international recognition. She received the Nobel Prize for Peace in 1979. After receiving the honor, Mother Teresa said, “I choose the poverty of our poor people. But I am grateful to receive (the Nobel) in the name of the hungry, the naked, the homeless, the crippled, the blind, the lepers, all those people who feel unwanted, unloved, uncared for throughout society, people who have become a burden to society and are shunned by everyone.”

On September 5th, 1997, Mother Teresa died of a heart attack at 9.30 pm. It was an irreplaceable loss that was felt worldwide. Mother Teresa was buried on September 13th, 1997, exactly 7 months after electing Sister Nirmala as her successor. Mother Teresa would live on in the memory of all those who were, during her lifetime, graced by her tender touch that made all the difference.