Meditation Essay: Modern age philosopher Osho maintain “No meditation, No life. Know meditation, Know life.” This quote holds a cent percent relevance in today’s time. In this modern day and age, the negative effects of stress are unavoidable. People have literally forgotten the way to live their life. They are extremely busy running after materialistic goals thereby fueling stress every day. 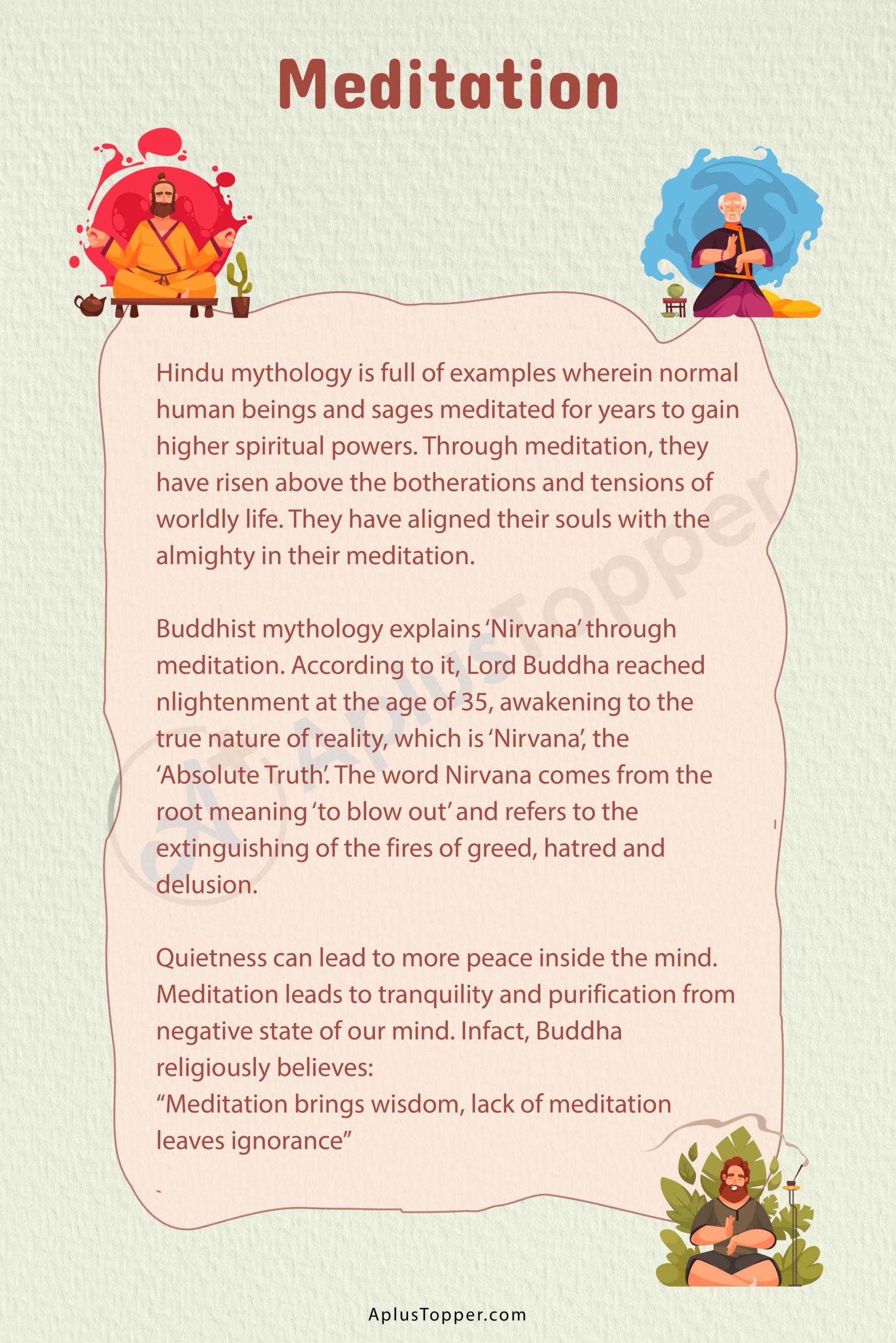 Below we have given a long essay on Meditation of 500 words is helpful for classes 7, 8, 9 and 10 and Competitive Exam Aspirants. This long essay on the topic is suitable for students of class 7 to class 10, and also for competitive exam aspirants.

To cope with this stress, they have tried everything from exercise and diet to alternative methods like medicines. However, the most effective method to deal with stress is not one of these modern methods but rather thousand years old idea of meditation. Meditation finds its root in many religions, primarily in Hinduism and Buddhism.

Hindu mythology is full of examples wherein normal human beings and sages meditated for years to gain higher spiritual powers. Through meditation, they have risen above the botherations and tensions of worldly life. They have aligned their souls with the almighty in their meditation.

Buddhist mythology explains ‘Nirvana’ through meditation. According to it, Lord Buddha reached enlightenment at the age of 35, awakening to the true nature of reality, which is ‘Nirvana’, the ‘Absolute Truth’. The word Nirvana comes from the root meaning ‘to blow out’ and refers to the extinguishing of the fires of greed, hatred and delusion.

When these emotions are destroyed by wisdom, the mind becomes free, radiant and joyful, and at death, one is no longer subject to rebirth. Nirvana is the ultimate happiness, which can be achieved through meditation. The basic principles and practices of meditation are rooted in Hinduism, which believes that the soul is eternal and maintains an eternal relationship with God. The aim of meditation is to quieten the-thought waves of the mind.

Quietness can lead to more peace inside the mind. Meditation leads to tranquility and purification from negative state of our mind. Infact, Buddha religiously believes:

Meditation is very difficult to describe and can only truly be explained once experienced. It is the practice of mental concentration leading ultimately through a sequence of stages to the final goal of spiritual freedom called nirvana. Meditation can be compared with any sport, for example to basketball game. Everyone can try to play this sport but only a few know the rules and the central dogma of the game.

And the others just play the game as they assume it is like. So, it would be right to say that not everyone is able to practise meditation correctly.

Learning to meditate properly, however, is very difficult and must be done under the supervision of teachers. A person who has not practised meditation before, finds it difficult to understand the nature of his mind and may think he is meditating while his mindVuns disorderly.

Just a mere 10-15 minutes practice of meditation each day can bring many positive results in the lives of the people. It can be practised anywhere and anytime. The first stage of meditation is to stop distractions and make the mind clearer and more lucid.

This can be accomplished by practising a simple breathing meditation. A quiet place is chosen to meditate and to sit in a comfortable position with closed eyes. Sitting in traditional cross-legged manner is preferable. The most important thing is to keep the back straight to prevent mind from becoming sluggish or sleepy.

The main motto is to concentrate on breathing. Breathing, during meditation is done naturally, preferably through nostrils, without j attempting to control it, thereby trying to become aware of the sensation of the breath’s movement. This sensation is the object of meditation. Additionally, meditation should be practised with great discipline and awareness to obtain positive results, otherwise it can cause problems in psychological and spiritual well-being. 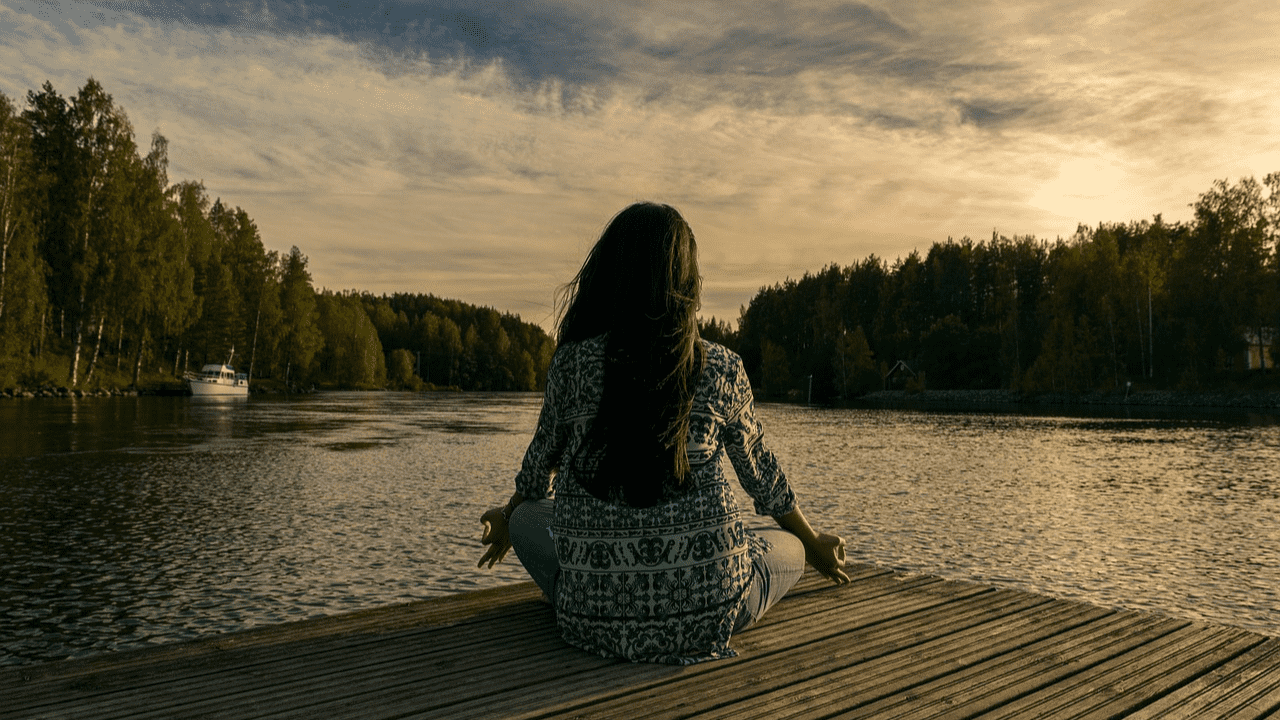 Below we have given a short essay on Meditation is for Classes 1, 2, 3, 4, 5 and 6. This short essay on the topic is suitable for students of class 6 and below.

In the recent years, scientists and doctors have shown interest in the effects that meditation has in people going through various situations. Infact, prestigious universities such as Harvard and Washington have invested their efforts in the research and have also come out with positive results. Meditation not only helps reduce the negative effects of stress, but also leads to a better sense of well-being by uniting mind and body.

Statistics on meditation in the Western culture has shown that people suffering from chronic pain, anxiety, depression, hypertension were treated with the help of meditation. Meditation provides benefits to all of the major forms of human existence: physical, mental, emotional and spiritual.

A lot of famous people across the globe have started shifting to this practice religiously. They believe that through meditation, mind is rejuvenated, the soul refreshed, nerves calmed and in general, one is at peace with oneself and the environment. Fortified by sessions of meditation, people have found they are able to face, the tensions of the world with increased success. Infact, Dalai Lama has gone a step ahead in saying:

“If every 8 year old in the world is taught meditation, we will eliminate violence from the world within one generation.”