Mathematics Day Essay: Mathematics has always been a subject of extreme. The word ‘mathematics’ gives terror to most students, whereas there is a small percentage who loves it to the core.

The National Mathematics Day is celebrated on 22nd December, which is the birth anniversary of Srinivasa Ramanujan. An Indian mathematician born, to change the future of maths. He was never formally trained in the subject, yet he became one of the greatest mathematicians of all time.

The day is recognized to commemorate his greatness and contributions in the field of mathematics like infinite series, number theory, mathematical analysis, etc.

Here we provide a long and a short essay for students, teachers, and children with about 500 words and 150 words approximately on the topic ‘Mathematics Day’.

These essays can help anyone who is looking forward to presenting an essay on the above topic.

It includes ten Lines and FAQs on the topic to make the content clearer to our readers.

In the year 2007, when the first World maths day was held, 287,000 students participated from 98 countries across the world answered 38,904,275 questions. Then with the passing years, the number of students started increasing. In 2019 the World Maths Day event was combined with a social media competition, where students from all over the world were encouraged to dress up in a maths-themed outfit. This was done to celebrate maths. There were entries from many famous mathematicians.

The student who performs well in the competition gets to win a number of awards. The champions and the top ten students in the world are awarded gold medals every year.

National Mathematics Day is celebrated to commemorate the contributions of Srinivasa Ramanujan in the history of Mathematics. He was born in the year 1887. After completing his studies after a lot of financial difficulties, he got a scholarship in Government Arts College, Kumbakonam. But he was so focussed in maths that he could not focus on any other subject and thus, failed in all the subjects except maths, losing his scholarship.

Srinivasa never got formal training for his extraordinary capabilities in maths. He was gifted with it. He could quickly solve the most robust mathematical equations within minutes.

His contributions are innumerable in the field of maths. He had provided a new dimension to infinite series, number theory, mathematical analysis, etc. thus, the celebration of the national mathematics day started to inspire more youth to pursue their dreams and ambitions.

In the end, one must work hard to achieve one’s goals. Be it World Maths Day or The National Mathematics Day, the end line that both these days celebrate and cherish is the discovering of the subject Mathematics.

It could be dread for most, but still, it is a subject that is loved by many. Without mathematics, it would become impossible to deal with our daily chores. Maths is everywhere. From shopping to paying our helpers, to running a big business or a tiny one. The basics of mathematics are required everywhere. If one fails to understand that, one will have to suffer in the future for it.

So, one should at least try to know the most of this subject as it is like salt, if there are no maths, there will be nothing one could not imagine their lives without numbers. 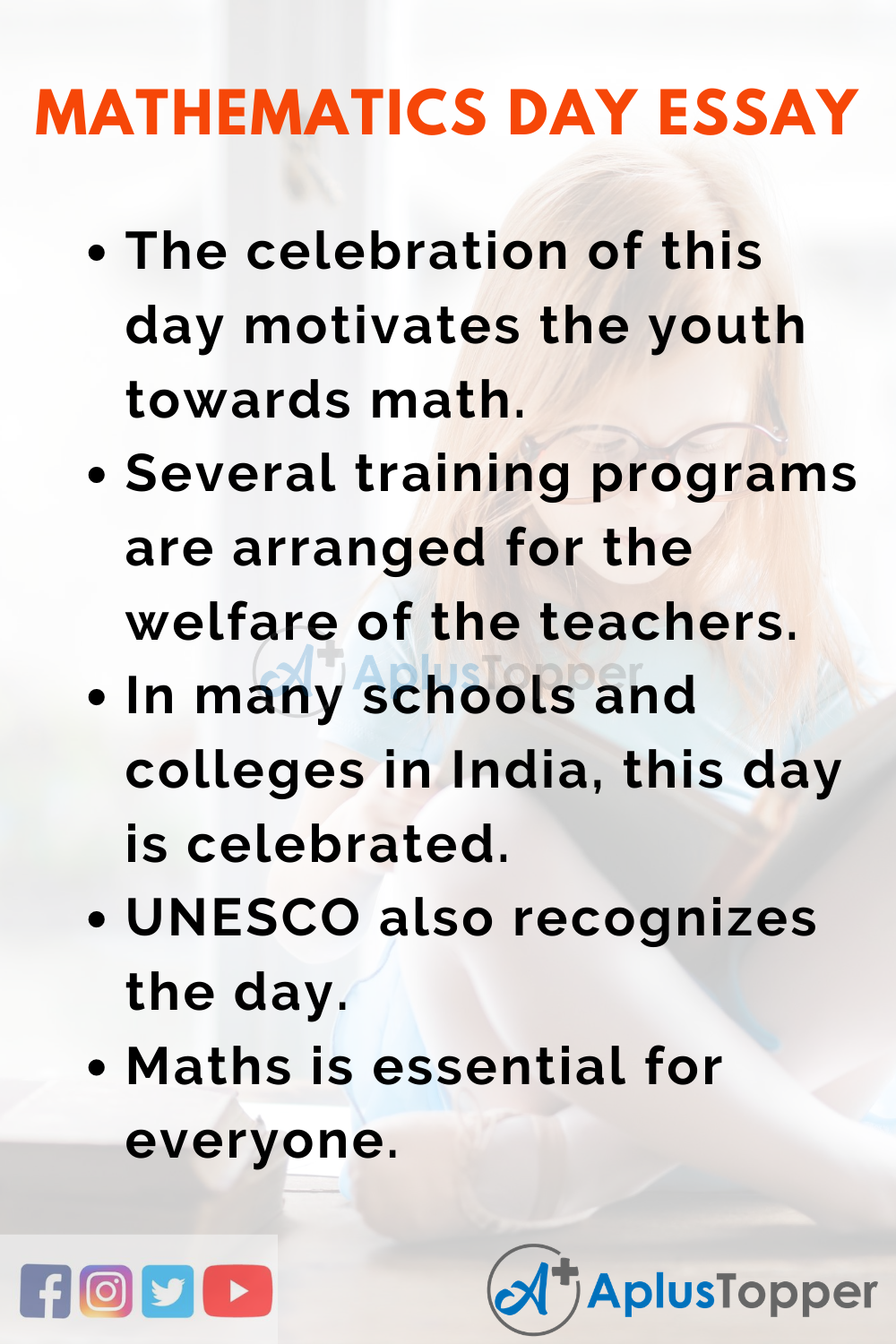 First is the World Mathematics Day, which is an online maths competition which was first held on 14th March 2007. Students and maths lover from all over the world participate in this competition to win. The top ten rank holders of this competition are awarded gold medals and certificates.

Both these days are celebrated to encourage more practice of maths among the students. The majority of the students are afraid of maths, but that should not be the case. 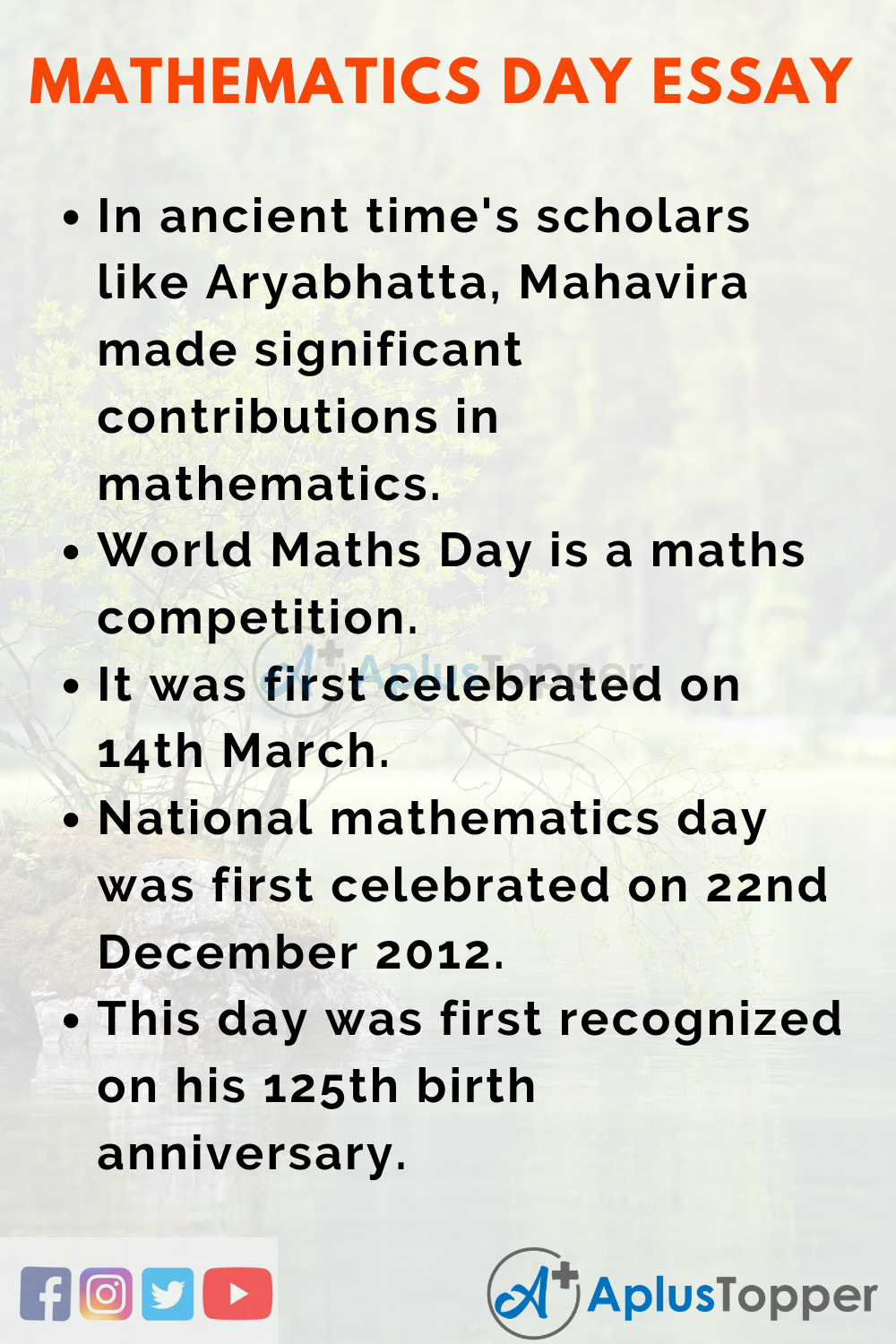 Question 1.
What are Ramanujan’s contributions to mathematics?

Question 2.
What is the importance of Math Day?

Answer:
World math day is celebrated to make students aware and encourage them to sharpen their arithmetic skills.

Question 3.
When is the World Maths Day celebrated?

Answer:
It is celebrated on 14th March.