Math Labs with Activity – Equal Chords of a Circle Subtend 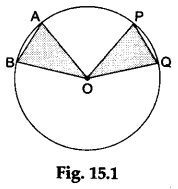 In ΔAOB and POQ, we have

Procedure
Step 1: Paste the white paper on the cardboard and draw a circle with centre O on this paper.
Step 2: Take a pair of compasses. Placing its needle point at a point A on the circle and taking any radius, draw an arc cutting the circle at some point B. Joining AB we get a chord of the circle.
Taking the same radius and again placing the needle point of the compasses at another point P on the circle, draw an arc cutting the circle at some point Q. Joining PQ we get another chord which is equal to the chord AB.
Step 3: Join AO and BO to form the triangle AOB. Also, join PO and QO to form the triangle POQ (see Figure 15.2). 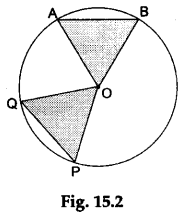 Result
It is verified that equal chords of a circle subtend equal angles at the centre of the circle.