Martin Luther King Jr Essay: Martin Luther King Junior, born as Michael King Jr was an American activist who became one of the most famous American spokespersons of all time. He was an advocate of civil rights through non-violence and civil disobedience.

He was mostly influenced by the Indian freedom fighter Mahatma Gandhi who is known to be the flag-bearer of “Ahimsa” or “Non-violence” as a path to civil liberty. King was the first president of the Southern Christian Leadership Conference (SCLC).

While presiding over SCLC, he led an unsuccessful struggle against the Albanian segregation of 1962. Martin Luther received a Noble Prize for combating racial violence in the year 1964.

We are providing students with essay samples on a long essay of 500 words and a short essay of 150 words on the topic on Martin Luther King Jr.

Long Essay on Martin Luther King Jr Essay Essay is usually given to classes 7, 8, 9, and 10.

Martin Luther King Junior was born on 15th January 1929 in Atlanta, Georgia to Reverend Michael King sr. and Alberta King. He was an American Christian minister who was also a human activist.

King was a Christian believer and was influenced by the Biblical scriptures from a very young age. As a child, he witnessed his father standing against segregation and various forms of discrimination.

In his adolescent years, King witnessed the racial discrimination that he and his family had to face in the South. In his school, King became an eloquent speaker and joined the school’s debate team with hordes of opinions.

King graduated from Morehouse College with a bachelor of arts in Sociology. He got married to Coretta Scott who was also an activist on 18th June 1953.

The year 1955 saw spurge of activism when Claudette Colvin, a black teenager refused to give up her seat for a white man, violating the Jim Crow Laws of the Southern United States that enforced racial discrimination.

A similar incident later happened as well, and this led to the Montgomery bus boycott, which continued for 365 days. Martin Luther King Jr led the movement.

This was a group created by King and his associates to conduct non-violent protests and civil disobedience for the black Christians. King presided over the conference until his untimely death.

Some of the important movements led by King

The Albany Movement was a movement against segregation which was led by King. Though unsuccessful in the end, this movement caught a lot of attention from the rest of the world and focused on the leadership abilities of Martin Luther King the jr.

King was arrested while leading the Black liberation movement in Birmingham in the year 1963. This was his 13th arrest out of the 29 times that he was arrested. This campaign was a success because this movement scraped down the Jim Crow law.

King is mostly remembered for his 17-minute emphatic speech called “I have a dream” that he delivered the March on Washington in 1963. This speech is still considered to be one of the world’s finest orations. The March on Washington was one of his greatest achievements and paved the way for the Civil Rights Act of 1964.

King opposed the Vietnam War for he felt it to be a showcase of military power and a futile loss of resources.

King was awarded the Noble Peace Prize for his activism against Racism.

Martin Luther King Junior was fatally assassinated by James Earl Ray at 6:01 pm on 4th April 1968at the Lorraine Motel, Tennessee while he was only 39 years old. 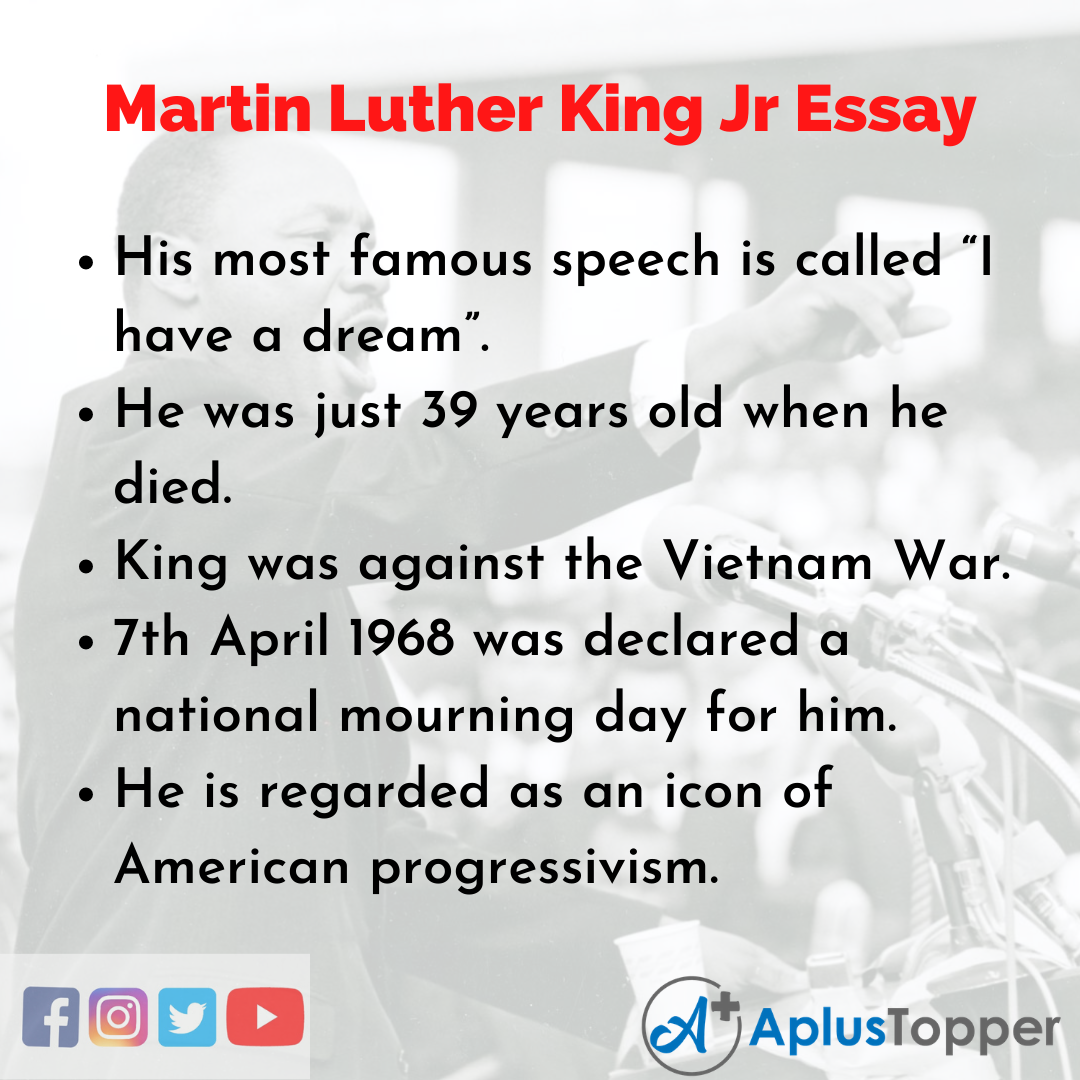 Born on 15th January 1929, Martin Luther King was an American Christian minister and civil rights, activist. He is well known for his movements in South America against the racial declaration.

He was awarded the Noble prize for peace for his advocacy on black civil rights. King was a believer in the doctrine of non-violence or Ahimsa propagated by the Indian leader Mahatma Gandhi.

Some of King’s very well-known movements were the Albany movement, Birmingham Campaign, St. Augustine movement in Florida and many more. The 1963 March on Washington was his most successful campaign where he delivered the world-known “I have a dream” speech.

It is still regarded as one of the most proficient orations of the world.

The Salem voting rights movement and the Chicago open housing movement were led by King and pave the way for a more liberal world for the blacks.

1. His most famous speech is called “I have a dream”.
2. He was just 39 years old when he died.
3. King was against the Vietnam War.
4. 7th April 1968 was declared a national mourning day for him.
5. He is regarded as an icon of American progressivism.
6. He was the father of four children.
7. His famous book on non-violence is called ‘Stride toward Freedom’.
8. Byard Rustin was one of his close associates.
9. He led the SCLC until his untimely death.
10. King was also awarded the Presidential Medal of Freedom posthumously by Jimmy Carter. 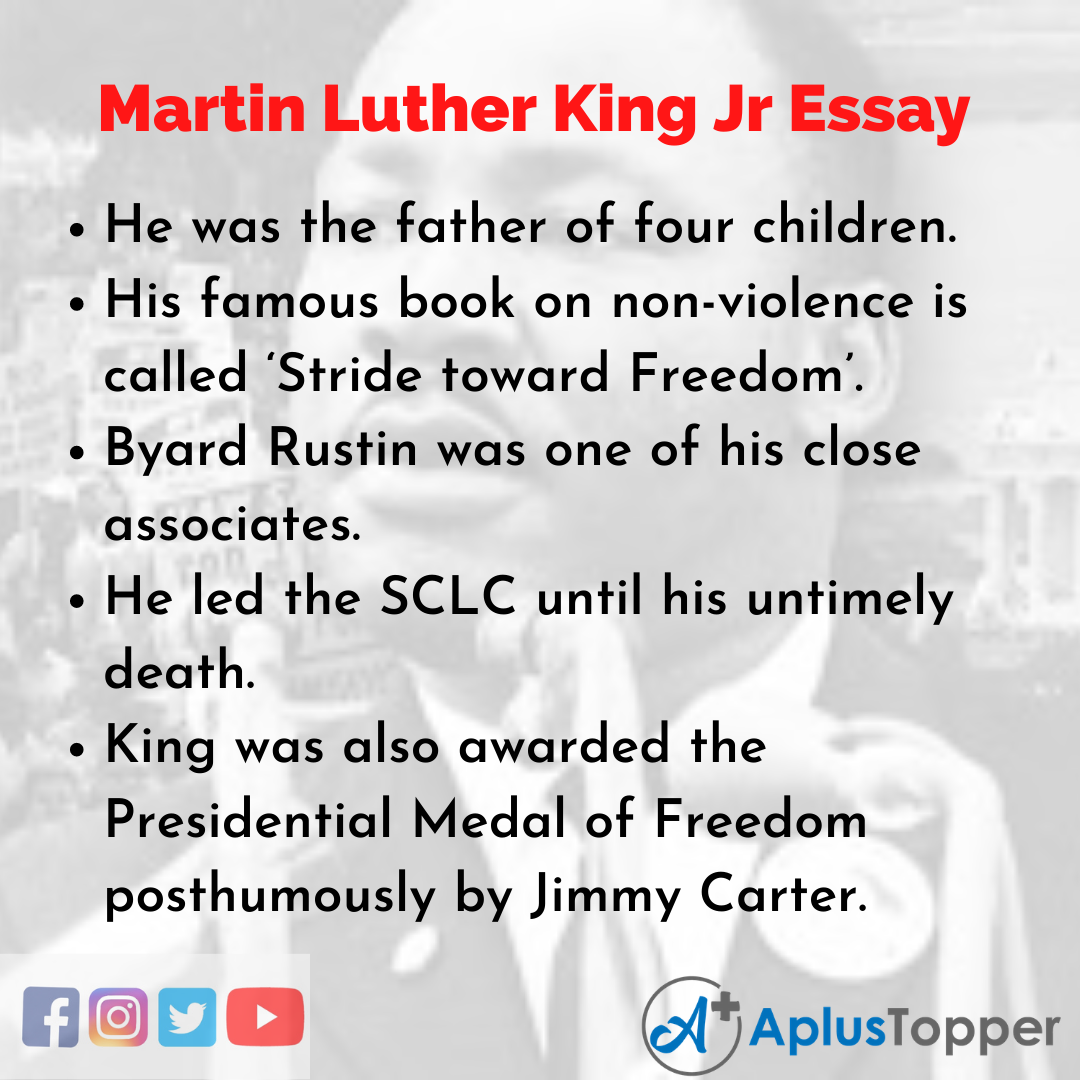 Answer:
Yes, King was an American Christian and not an immigrant.

Answer:
No, Martin Luther brought about the reformation movement. Luther King Jr, on the other hand, was a civil liberty activist.

Question 3.
How old was King when he died?

Answer:
King was just 39 years old when he died.

Answer:
King was assassinated by a man called James Ray.