Marriage Essay: Marriage is a social contract between two people which is legally and socially recognized and is a stage of social advancement between families.

The concept of marriage differs from one culture and religion to others. Marriage creates normative obligations between the involved individuals. It is an act of starting a family or extending an existing family.

We are providing students with essay samples on a long essay of 500 words and a short essay of 150 words on the topic Marriage for reference.

Marriage is the cultural and physical union between two people which includes social laws and cultural obligations between their respective families. There are some socially pre-decided rules for marriage.

There are various forms of marriage, according to socio-economical and cultural situations along with the cultural advancement of a community. In monogamy, one man is allowed to keep a marital relation with one woman. It helps in better adjustment and cooperation, intimacy, equalitarian way of living and socialization of their children.

Polygamy is also present among certain cultural groups where one man can marry two or more women and vice versa. Polygamy is again of three types, such as polygyny (one wife or one husband at a time), polyandry (a woman having more than one husband at a time or brothers sharing a wife or wives in common) and group marriages (a group of men marrying a group of women). Polygamy has been present since the ancient period and is still present in countries of Africa and Muslim dominated countries of South East Asia.

Levirate is another type of marriage where a woman gets married to the brother of the deceased husband. Sororate implies the marriage of a man to the sister of his alive or dead wife. The state of living together as husband and wife without having a social marriage is termed as concubinage.

Same-sex marriages also exist in society since history, where individuals of the same gender get married. The rites and rituals of same-sex marriage are legally performed and recognized in many countries in the world such as Australia, Netherlands, countries in South America, the United States, certain countries in Europe and even India. Recently, on 6th September 2018, the Supreme court of India has decriminalized Section 377 as gay marriages are made legal.

The patterns of marriages have changed over time. With the acceptance of single parenting and cohabitation, the meaning of marriage has changed. With the modernization of society, the previous patterns are becoming obsolete, and new laws are created with this changing pattern within a society.

Marriage promotes physical and mental health with a better way of living. It is a way of social security, and it creates affective social and economic conditions for effective parenting. It also creates social capital yielding to a larger society.

Disadvantages of marriage include social restrictions on one’s freedom, social, emotional and financial dependence on the partner, naiveness regarding the concept of marriage and unequal treatments. Marriage, an essential structure to the society, is a commitment or bond between two individuals which is supported by love, tolerance, security and harmony. It is performed within the society maintaining the social norms and different rites and rituals.

The idea of marriage is controversial. It is based on a sense of trust and togetherness with a hope to combine worlds of two different individuals without causing damage to the structure. Family issues, financial conditions, adjustments between the individuals and social norms often influence a marital relation.

Marriage leads to the establishment of families, provision of economic cooperation contributes to emotional and intellectual inter stimulation of the involved partners and social solidarity.

With the modernization of the civilization, the concept, pattern and forms of marriages have been changing. It is considered to be crucial for society, but nowadays, the patterns of marriage are distorted.

10 Lines on Marriage in English 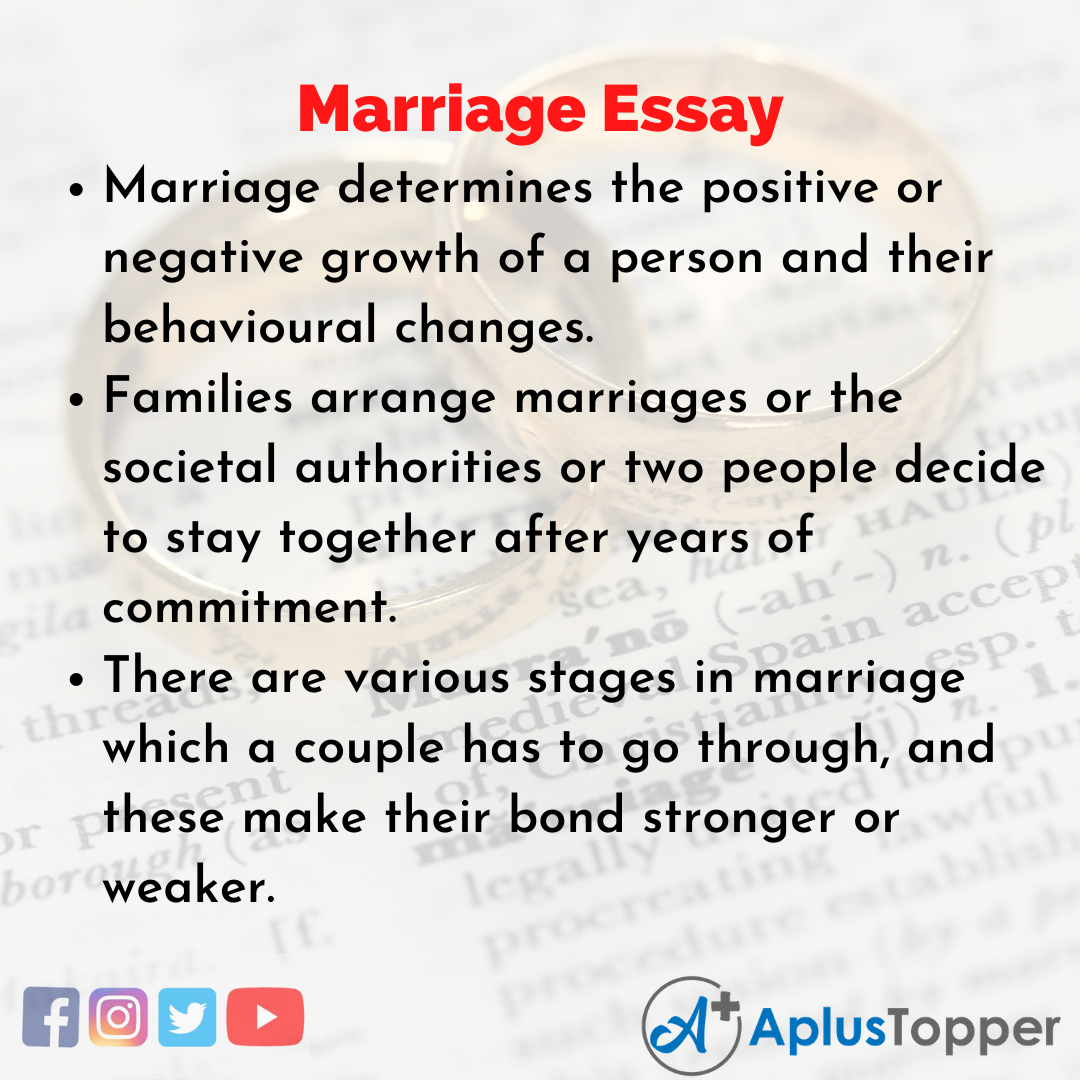 Question 1.
How important is marriage in a person’s life?

Answer:
Marriages are essential, and they give assurance and a sense of social and emotional security, but marriage shouldn’t be a topmost priority in an individual’s life.

Question 2.
Why are the societal conditions necessary in a marriage?

Answer:
Societies have pre-decided terms and conditions regarding marriages, and if someone gets married without following these, the marriage would not be considered legal and would not be accepted by society.

Question 3.
What is the correct age to get married?

Answer:
The judiciary laws decide the age of marriage, and it needs parental approval. Mostly, marriage age as a right is at the age of majority as declared by the laws.