Marijuana Essay: Marijuana, also known as cannabis, among other names, is a psychoactive drug from the Cannabis plant used primarily for recreational or medical purposes. The main psychoactive component of cannabis is tetrahydrocannabinol (THC).

Cannabis can be used by smoking, vaporizing, and food, which has various mental and physical effects, including euphoria, altered states of mind and sense of time, difficulty concentrating, impaired short-term memory, and body movement, relaxation, and an increase in appetite.

We are providing students with essay samples on a long essay of 500 words and a short essay of 150 words on the topic of Marijuana for reference.

Marijuana is a greenish-gray mixture of the dried flowers of Cannabis sativa, also known as pot, herb, weed, grass, bud, Mary Jane, ganja, and many other slang terms. Some people smoke marijuana in hand-rolled cigarettes called joints, pipes, in blunts (marijuana rolled in cigar wraps), or water pipes (sometimes called bongs). Marijuana can also be used to brew tea. It is frequently mixed into foods (edibles) such as brownies, cookies, or candies, particularly sold or consumed for medicinal purposes.

For the consumption of marijuana, vaporizers are also increasingly used. Stronger forms of marijuana include sinsemilla (from specially tended female plants) and concentrated resins containing high doses of marijuana’s active ingredients, including honey like hash oil, waxy budder, and hard amberlike shatter. These resins are increasingly popular among those who use them both recreationally and medically.

The main psychoactive(mind-altering) chemical in marijuana, responsible for most of the intoxicating effects that people seek, is delta-9-tetrahydrocannabinol (THC). Chemically related THC compounds, called cannabinoids and other chemicals are found in resin produced by the leaves and buds primarily of the female cannabis plant. The plant also contains more than 500 other chemicals, including more than 100 THC compounds.

When marijuana is smoked, THC, and other chemicals in the plant pass from the lungs into the bloodstream, which rapidly carries them throughout the body to the brain. The effects of marijuana begin almost immediately on the person. Many people usually experience a sense of relaxation and pleasant euphoria. Other common effects, which include heightened sensory perception (e.g., brighter colors), laughter, altered perception of time, and increased appetite, may experience or vary dramatically among different people.

An acute psychosis, which includes hallucinations, delusions, and a loss of the sense of personal identity, maybe experience by people who have taken large doses of marijuana. Although detectable amounts of THC may remain in the body for days or even weeks after use, the noticeable effects of smoked marijuana generally last from 1 to 3 hours, and those of marijuana consumed in food or drink may last for many hours.

In 2013, Uruguay became the first country to legalize the recreational use of cannabis. Other countries to do so are Canada, Georgia, and South Africa, along with 11 states and the District of Columbia (though the drug remains federally illegal). Medical use of cannabis, requiring the approval of a physician, has been legalized in many countries.

Imaging studies have shown conflicting results on the impact of marijuana on brain structure in humans. Some studies suggest regular marijuana use in adolescence is associated with altered connectivity and reduced volume of specific brain regions involved in a broad range of executive functions such as memory, learning, and impulse control compared to people who do not use.

Some studies have also linked marijuana use to declines in IQ, especially when use starts in adolescence and leads to persistent cannabis use disorder into adulthood. More research will be needed to answer definitively whether marijuana use causes long-term IQ losses.

People with marijuana use disorders, especially adolescents, often suffer from other psychiatric disorders (comorbidity). On average, adults seeking marijuana treatment have attempted to quit more than six times and used marijuana nearly every day for more than ten years.

They may also use or be addicted to other substances, such as cocaine or alcohol. Available studies indicate that effectively treating the mental health disorder with standard treatments involving medications and behavioral therapies may help reduce marijuana use, particularly among those involved with heavy use and those with more chronic mental disorders. 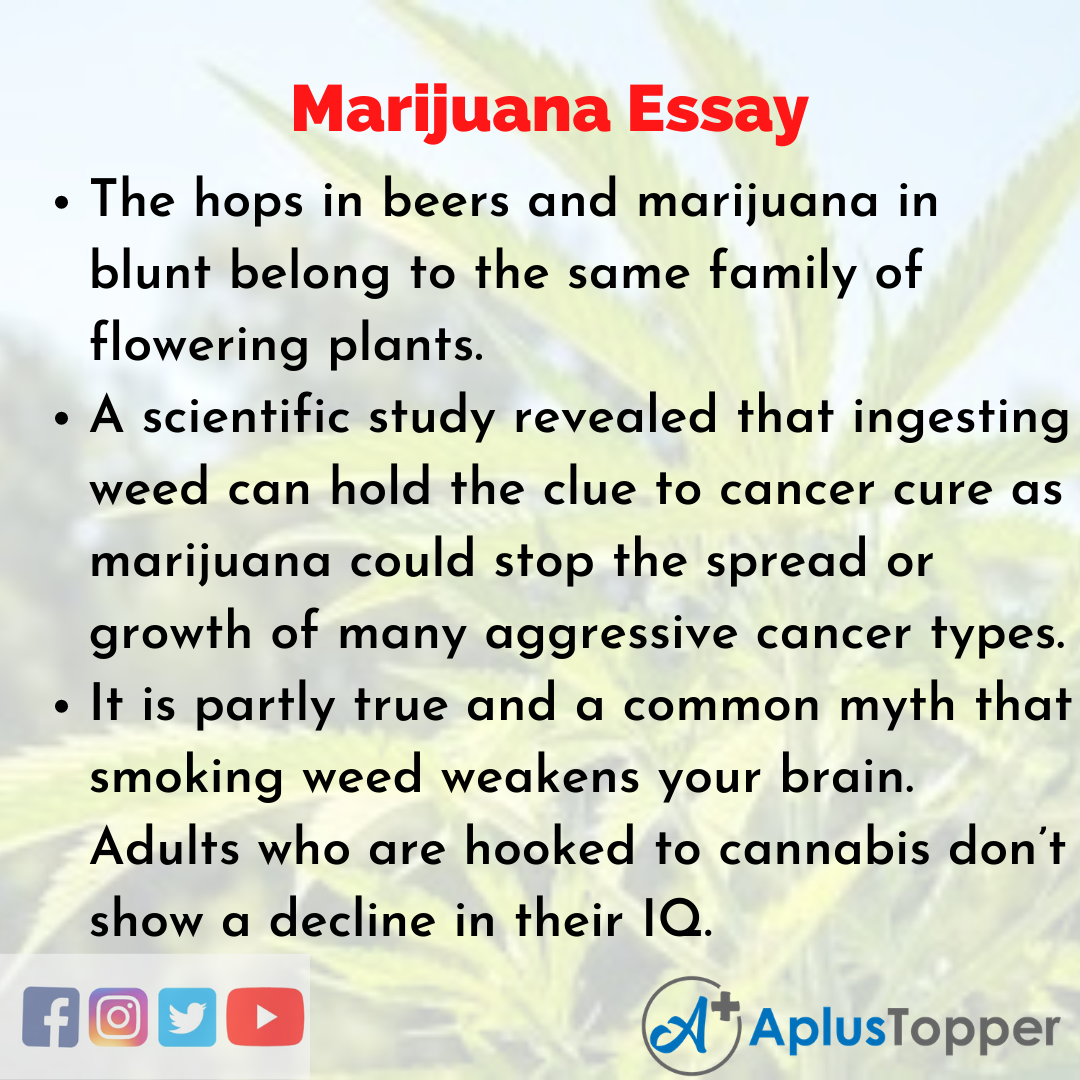 Marijuana, also known as pot, herb, weed, grass, bud, Mary Jane, ganja, and many other slang terms, is a greenish-gray mixture of the dried flowers of Cannabis sativa.

The main psychoactive(mind-altering) chemical in marijuana, responsible for most of the intoxicating effects that people seek, is delta-9-tetrahydrocannabinol (THC).

When marijuana is smoked, THC, and other chemicals in the plant pass from the lungs into the bloodstream, which rapidly carries them throughout the body to the brain. Chemically related THC compounds, called cannabinoids and other chemicals, are found in the female cannabis plant’s resin.

Many people who consume marijuana usually experience a sense of relaxation and pleasant euphoria. Other common effects include laughter, altered perception of time, heightened sensory perception (e.g., brighter colors), and increased appetite. The experience may vary dramatically among different people.

Effectively treating the mental health disorder with standard treatments involving medications and behavioral therapies may help reduce marijuana use, particularly among those involved with heavy use and those with more chronic mental disorders.

10 Lines on Marijuana Essay in English

1. The hops in beers and marijuana in blunt belong to the same family of flowering plants.
2. A scientific study revealed that ingesting weed can hold the clue to cancer cure as marijuana could stop the spread or growth of many aggressive cancer types.
3. It is partly true and a common myth that smoking weed weakens your brain. Adults who are hooked to cannabis don’t show a decline in their IQ.
4. The first e-commerce transaction was the sale of cannabis, done by Stanford students back in 1971!
5. It’s common thinking that Netherlands or Jamaica may have the highest population percentage consuming marijuana, but it’s Iceland, with almost 18 % of its population reportedly using weed.
6. In Bhutan, the popular feed for pigs is weed as it is more common than grass; not many smokes it.
7. A pot smoker would theoretically have to smoke a lot of weed, nearly 680 KGs of marijuana, within about fifteen minutes to die of it.
8. A cigarette has a 90% addiction rate, while marijuana is even less addictive than coffee. Studies indicate that alcohol and smoking are more harmful than weed.
9. Approximately 4,600 pounds of CO2 has been released into the atmosphere; weed poses bigger risks to the ecology.
10. Researchers have discovered that the brain produces similar reactions as a weed as that of chocolate. 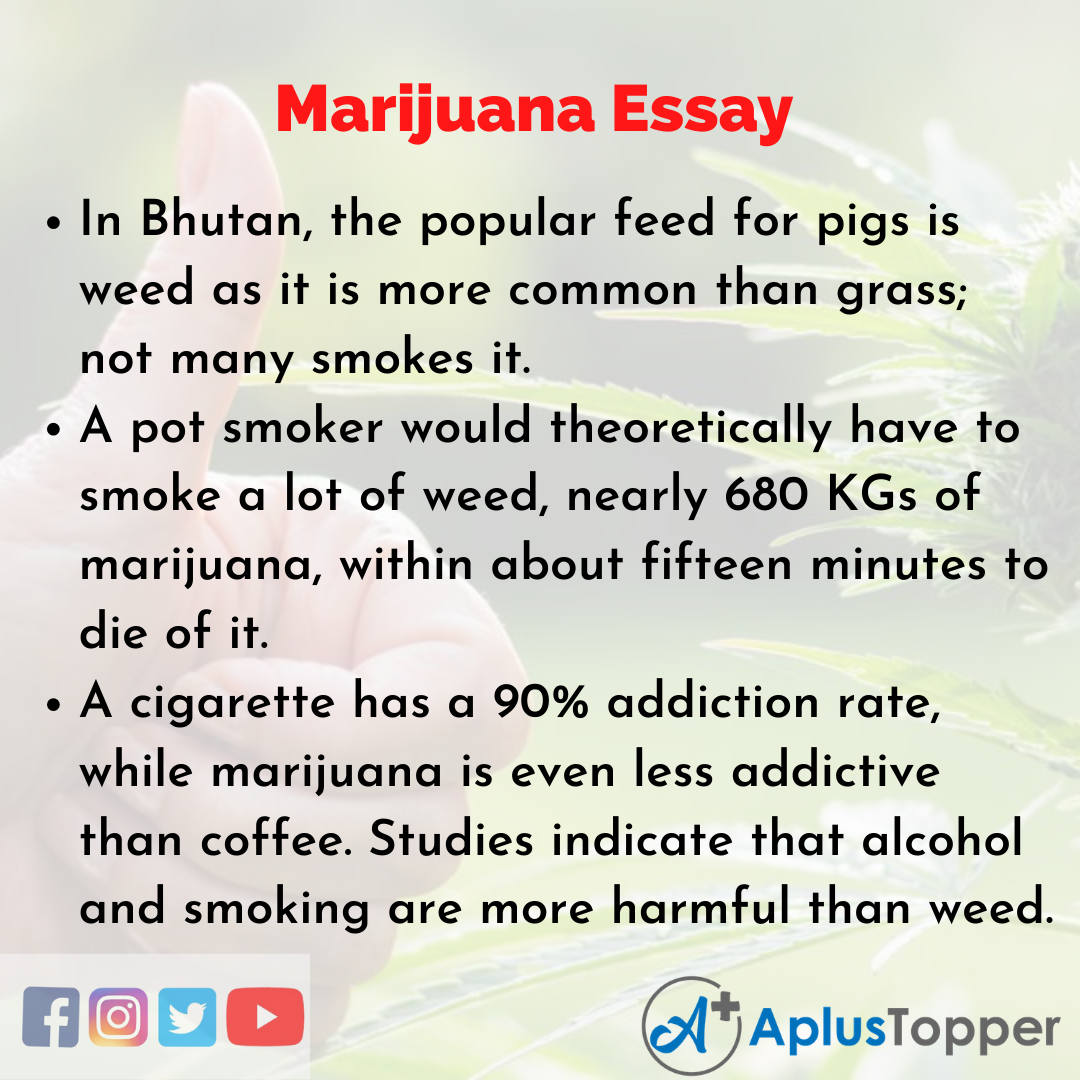 Question 1.
How is marijuana used?

Answer:
Marijuana can be smoked like a cigarette and rolled up like a joint or a cigar/blunt. Sometimes people mix it with food and eat it or brew it as a tea(edibles).

Question 2.
Is it possible to “overdose” or have a bad reaction to marijuana?

Answer:
A fatal overdose is unlikely, but that does not mean marijuana is harmless. Too much of Marijuana can cause extreme confusion, paranoia, panic, anxiety, etc.

Question 3.
What causes the effect when consumed Marijuana?

Answer:
The main psychoactive(mind-altering) chemical in marijuana is delta-9-tetrahydrocannabinol (THC).

Question 4.
Is it safe for a breastfeeding mom to use marijuana?

Answer:
We do not yet know. Chemicals from marijuana can be passed to your baby through breast milk as THC is stored in fat and slowly released.