Essay on Mahatma Gandhi’s Educational Philosophy: The teachings of Mahatma Gandhi are famous worldwide, and they revolve around the concepts of ahimsa (non-violence), satyagraha, and self-reliance. He is called the Father of the Nation since he carried the freedom movement on his shoulders and ensured that India became independent.

Gandhi’s Educational Philosophy is a shining beacon for students, laying down the path they can follow to become the greatest minds of the century. It can teach us how to change the world and make it a better and egalitarian place. Given below are some essays that students can refer to.

There is a long essay of 500 words and a short essay of 100 words. These are followed by ten lines summarising the compositions and the answers to some frequently answered questions.

Mahatma Gandhi’s Educational Philosophy essay is meant for students of classes 7, 8, 9, and 10.

Mahatma Gandhi believed that education was among the most critical facets of the functioning of the personality as well as society and the world overall. A nation with educated young people can evolve at a much faster pace than a country with an ignorant population. He claimed that every child in India had to be trained as education was the secret to a successful life. Some of his ideologies were:

Based on those universal values, Gandhian educational concepts do not sacrifice their fundamental importance in the years to come. The plans would have to conceive about a self-sustaining primary education that would change the condition of the community’s lowest. The argument that this schooling should be focused on experience, problem-solving, and constructive practice, rather than pure book study, is entirely accurate.

Integral education, which allows the entire being of an individual to evolve, education that stresses character-building and cultural identification, is again obviously desirable. It is equally clear that, in our state-sponsored schemes, we have failed miserably to provide free, compulsory education to all.

As a consequence, the Gandhian paradigm maintains its importance and appeal. Nevertheless, whether this knowledge may be learned exclusively or mainly by studying art, and if future recipients or the state approves it, remains to be seen. Finally, the Gandhian paradigm requires, in my view, an interconnected framework for integrating or addressing older and newest innovations that are evolving every day.

Learning of computers, mobiles, and the internet along with the benefits of Artificial Intelligence has to be incorporated into such frameworks. As it stands, it tends to be quite backward-looking or, at any rate, built for a stagnant culture in which constant ancestral jobs remain from generation to generation. I believe the coming era should be one with incredible and unparalleled shifts.

However, this does not imply that the longstanding values that Gandhi has lived up to and championed will lose their impact. What this implies is that we are going to have to
find new and different ways to interpret, recognize, communicate, and live them out. Mahatma Gandhi’s Educational Philosophy essay is directed towards students of classes 1,2,3,4,5, and 6.

Mahatma Gandhi championed the cause of education and taught students how to be self-reliant and not be subservient to the British. To this cause, he wanted schools to conduct classes in the mother tongue of the region. He was determined that craft education would help students and evoke the correct balance between mechanical and mental labor.

He incorporated the ideas of self-reliance and non-violence in his educational philosophy. Gandhi’s understanding of creation, schooling, and society was modern. He utilized the three main philosophies of education in his writings. These were the concepts of naturalism, idealism, and pragmatism. His teachings will serve as a source of inspiration to students of future generations. 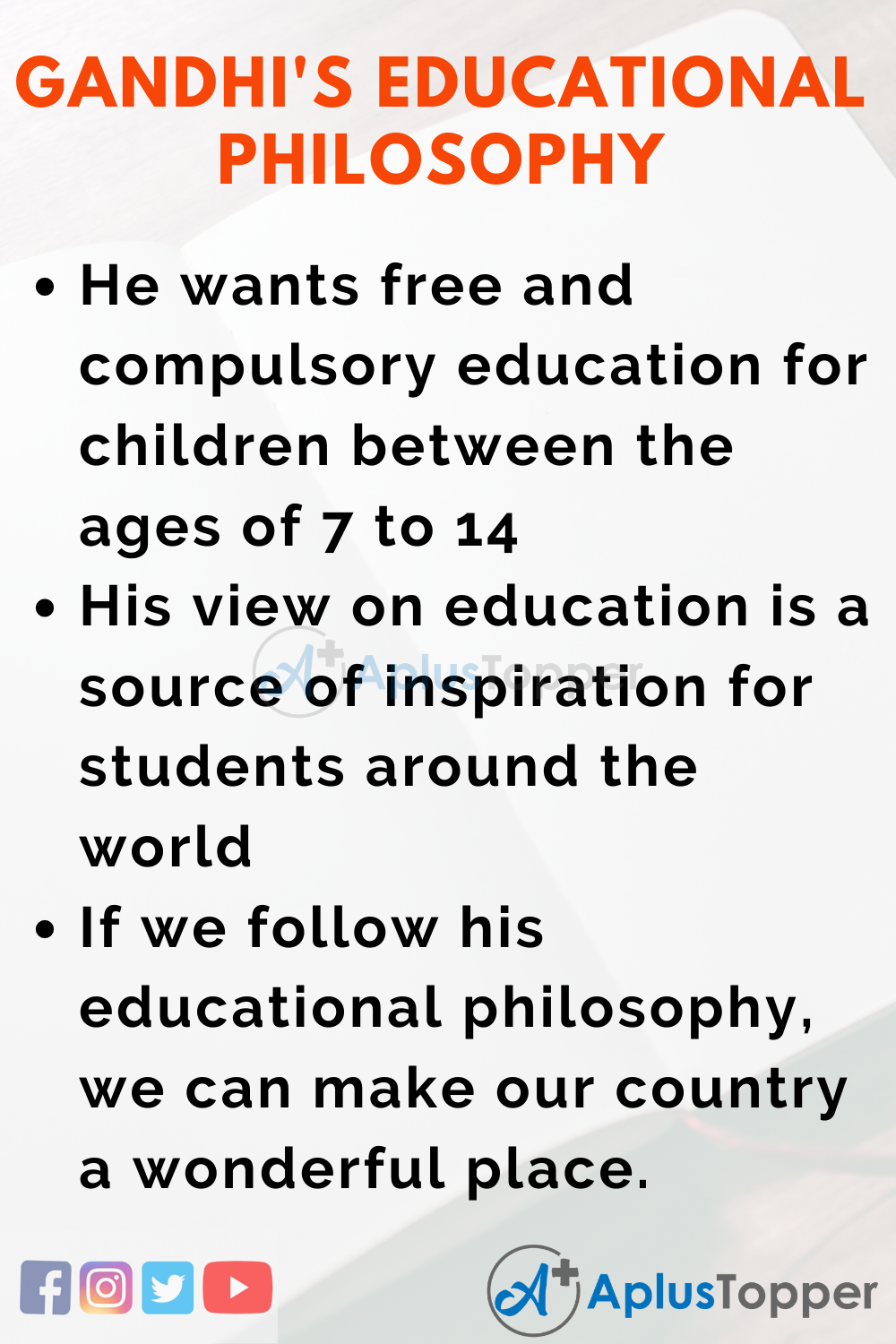 Question 1.
How can Gandhi’s Educational Philosophy help us?

Answer:
Gandhi’s teachings can help us to become self-reliant, empowered, and knowledgeable individuals with the capacity to change the world.

Question 2.
What are some of the core ideologies of Mahatma Gandhi’s Educational Philosophy?

Answer:
Some of the core tenets are social awareness, self-reliance, non-violence, instruction in the mother tongue, and free, compulsory education for all students.

Answer:
Gandhi’s teachings are a source of inspiration for all people worldwide. It has much relevance in current circumstances.