Macbeth Tragic Hero Essay: Macbeth is considered one of Shakespeare’s classic tragic heroes. Usually, the tragic hero is a figure of high stature.

The person is most righteous but suffers a self-inflicted downfall due to flaws in their personality. Macbeth, the play’s protagonist, was a good character, but he faces his decline due to his wrong decisions.

We provide students with essay samples on an extended essay of 500 words and a short essay of 150 words on Macbeth Tragic Hero for reference.

The Shakespearean play Macbeth focuses on a war hero whose desire for power, leading to his ultimate coronation as King and downfall. At the start of the drama, Macbeth was shown as a war hero who came back from his latest campaign and was given a new title.

Macbeth’s one mistake fills his life with regret and fear at every step. Macbeth was a good soldier who was loyal to his King, and his bravery and performance in Scotland’s battle were celebrated. His courage and greatness in the battle for his country ultimately lead him to be a great knight, and finally, an influential king, making his actions have a substantial impression on his land. His guilt and unwillingness in assassinating King Duncan also reveal his heroic nature. His potential in being a hero and positive attributes was displayed to justify his guilt. Macbeth’s conscience does not agree to kill Duncan because he was a loyal subject of King Duncan, and his obedience towards his King was also shown in the play.

Macbeth highly respected King Duncan and knew that everyone would mourn his death. He may not have committed assassination without the presence of Lady Macbeth, which shows that he is a tragic hero because he knew that he was making a wrong decision under the temptation of Lady Macbeth. His ambition to be a king and gain power, which turns into an obsession, is the only flaw in his character, and this flaw is responsible for the tragic events that occur in the whole play. He recognizes from the beginning of the tragedy that his ambition could be his demise, which shows that he is a tragic hero.

In the beginning, Macbeth used to be a good character, but he became corrupted and was shown as a tragic hero at the essential point at which all is lost. Although he was a man with good morals, at every step, his morals were taken over by his temptations and ambitions. Despite being a hero at heart, which readers and audience have seen from the start, his mistakes create an insight into evil.

With the manipulation and influence of Lady Macbeth, the hidden ambitions in Macbeth are strengthened, and her evil arrangement gradually tempts Macbeth. So although ambition and fate are the primary factors in Macbeth’s downfall, Lady Macbeth is also at fault. Macbeth’s weakness overturns his whole life and changes his honorable and respectable character into an evil and violent one hated by everyone.

The outcome of Macbeth’s decisions did not just affect him, but the whole of Scotland was also shaken. His character changed from a courageous and loyal man to an evil being despised by most Scotland due to his ill-fated decision, the witches’ prophecies, the influence of fate, and Lady Macbeth’s temptations. Due to his ambitions to reach his goals from the very beginning and maintaining this desire, Macbeth is seen as a tragic hero. 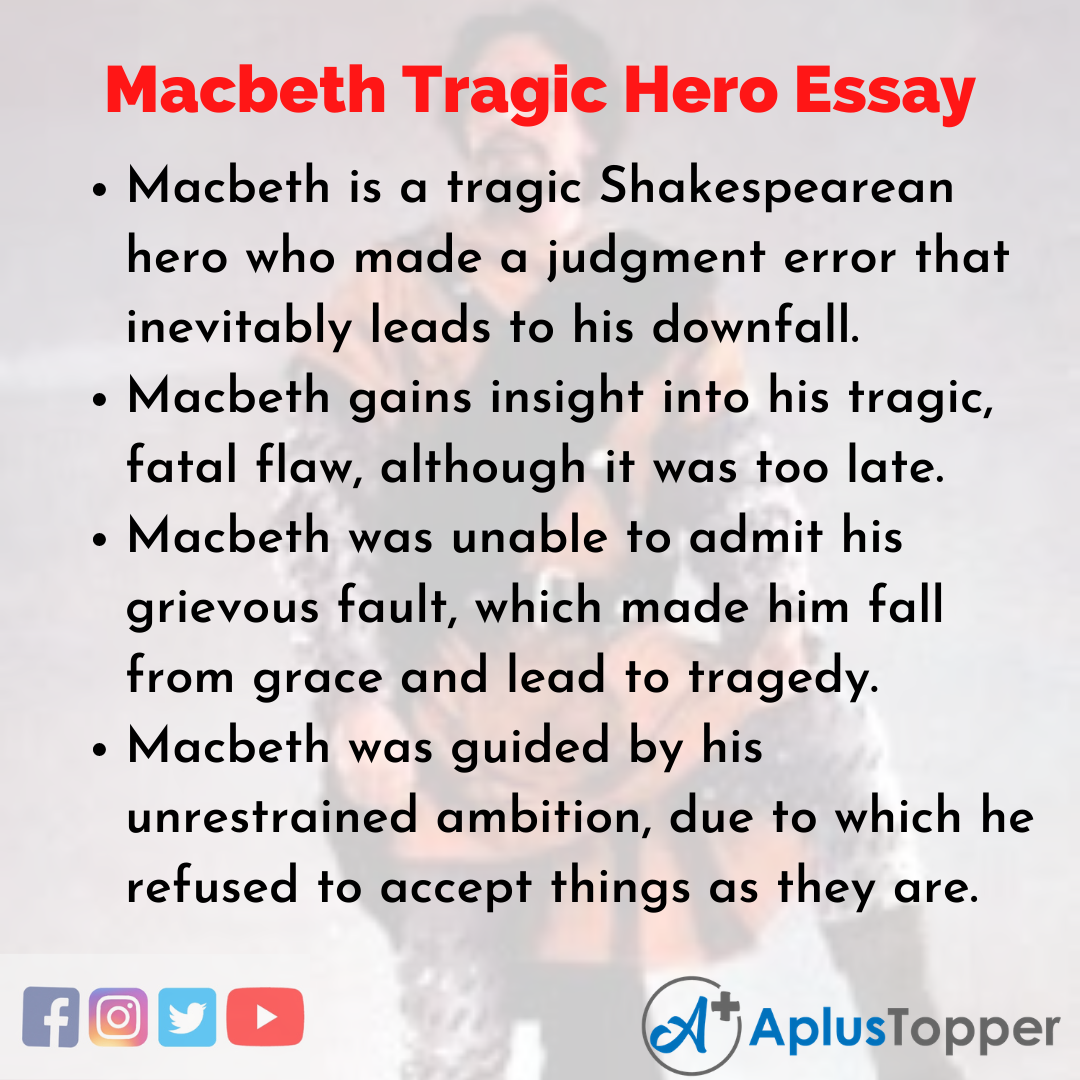 One of the classic examples of a Shakespearean tragic hero is shown in the play Macbeth, where the protagonist Macbeth can be seen as a tragic hero. Macbeth was established as a hero with great stature. He earned the King’s trust with his loyalty and his extraordinary abilities on the battlefield. He was someone with noble and respectable nature, and king Duncan spoke of him with great fondness, but he was unaware of the destiny Macbeth imposed on him later on.

Macbeth’s blind ambition and provocation from his wife lead him to take a bloody and violent path where he murdered his own King and ultimately lead to his demise. Macbeth was a righteous and noble person who could have achieved much more and would have been adored by all. If he did not commit Duncan’s assassination, Macbeth was consumed by a sinful life after Duncan’s murder, making him a tragic hero. 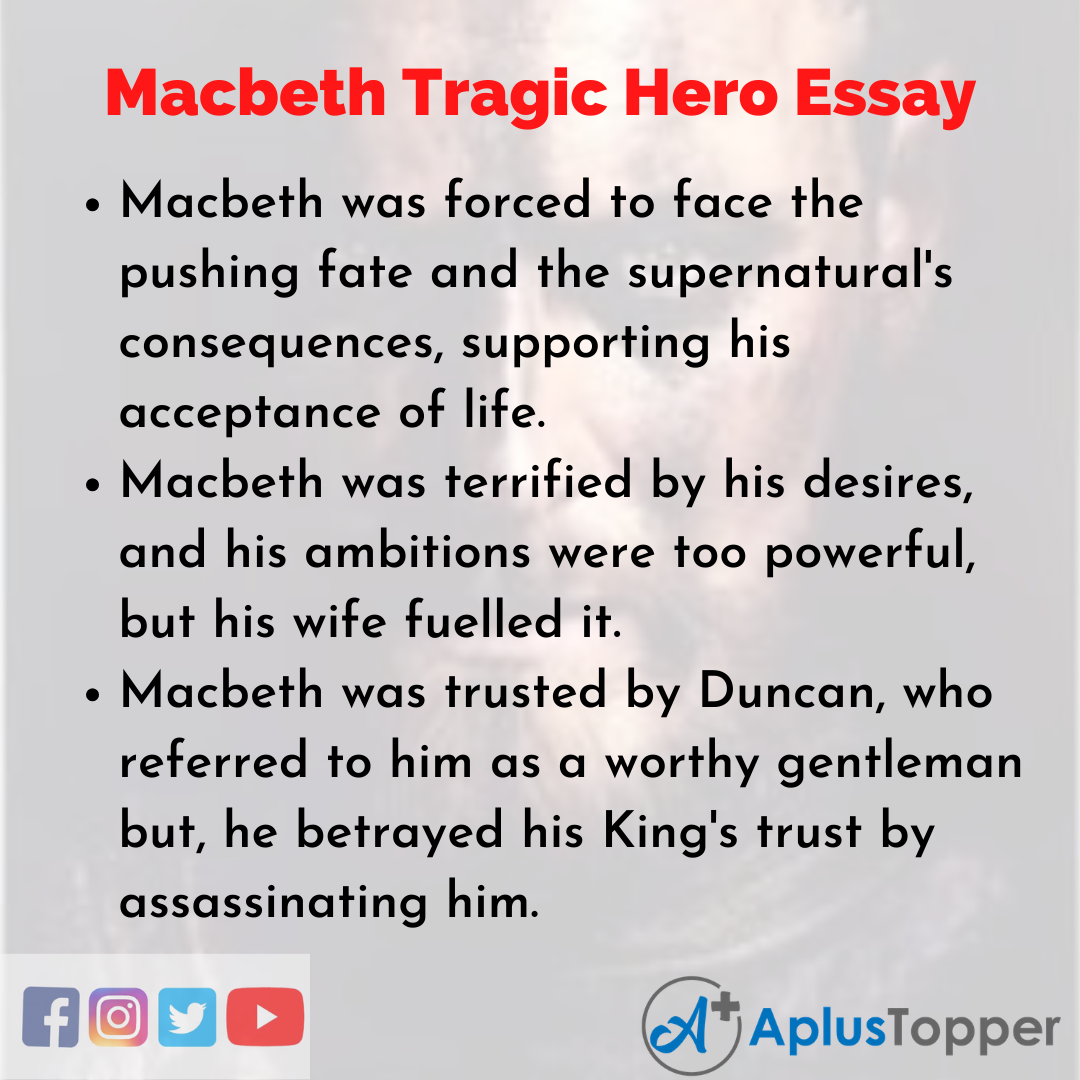 Question 1.
Can Macbeth be considered a fatal hero or villain?

Answer:
Many scholars see Macbeth as a villain instead of a hero due to his vile actions. But a tragic hero can be either an antagonist or a protagonist. The point is that the audience can empathize with the character.

Question 2.
Was Macbeth aware of his tragic flaw?

Answer:
Macbeth was aware of his tragic flaw, but he kept going for what he wanted, no matter even if people have to die because of it.

Question 3.
Who was the main antagonist in the play?

Answer:
Lady Macbeth was the real antagonist of the play because she was evil, ambitious, and eventually insane. Due to her, Macbeth’s unrestricted ambition was fuelled and ultimately led to his downfall.