Life of Soldiers Essay: Jai Jawan Jai Kisan, a term coined by the second Prime Minister of India, Lal Bahadhur Shastri, demonstrates the value that we Indians give to the two most important people in the country, a soldier and a farmer. While one feeds us, another protect us. In this life of soldiers essay, we shall be talking about the soldier’s life, how important they are to the country and what makes them stand out from the rest of the people in the country.

This life of soldiers essay mainly talks about the life of a soldier in India, but the values can be extrapolated and related to any soldier in the world in any country.

Long Essay on life of soldiers 600 Words in English

Every country has soldiers who fight for their nation and protect them from enemies. Some of the countries with the largest defence forces are the United States of America, India, China, France, Saudi Arabia and the United Kingdom. Every country on the planet requires defence systems in place to protect them, not only from enemies but also to rescue people from natural calamities and internal conflicts.

While every citizen is proud of their army, navy and air force, it is the actual foot soldiers in the system that we should be thankful for. Soldiers are the most respected and honoured people of the country, and rightfully so, given the amount of sacrifice they do with their personal lives so that the country is safe and sound. Soldiers are considered to be a lifeline for the country. Even during the smallest of unrests and conflicts in the country, we call on our men in catalogue to put out the fire. Hence, let us discuss a few important duties of a soldier

What are the duties of a soldier?

The following are a few of the duties that soldiers perform and hold importance in our lives. Defend our borders- Most of our army and navy soldiers are present on the borders of our country because that is one of the oldest and best defence strategies used by countries over hundreds of years. If we could stop the infiltration of bad elements into our country on our borders, the society at large within the borders will be safe and be protected well.

It is because the Indian soldiers are guarding the Pakistan border in the west and China border on the east that terrorist activities in India are considerably low. Defending borders is not just about stopping infiltration but also about protecting our land from hostile takeovers. Soldiers protect the land what is rightfully ours according to international laws.

Rescue missions- Soldiers are called in, in times of natural disaster such as earthquakes, floods and volcanic eruptions. We have seen soldiers rescuing stranded people in Uttrakhand earthquakes, during the cyclone Amphan in West Bengal and infamous tsunami in Tamil Nadu. The soldiers not only protect and rescue people in their country but also help in rescue missions in other countries such as the one that we witnessed in Nepal earthquakes.

Peacekeeping missions- India contributes a major amount of its defence resources to UN peacekeeping forces. The soldiers fight and help peace in conflict and war zones in countries such as Syria, Libya or Iraq. Through UN peacekeeping forces, every country helps douce the fire of humanitarian crises. Pilots and airforce conduct airlift missions from conflict zones, Navy seals protect our economic interest to help maintains smooth logistics and prevent any disturbances in the sea due to pirates or enemy ships.

To fulfil all his or her duties, a soldier has to sacrifice a lot of things in their lives. Soldiers stay away from their families for months together without knowing whether they will come back alive or not. This shows that they put the country and its safety first before the safety of themselves and their families. It is not an easy task to become a soldier. Along with strong physical abilities, you need mental power to become a soldier. To win a war against the country, you need a strategic and critical bend of mind to have comprehensive and visionary war strategies. There are plenty of exams that a candidate has to clear in order to get into the Indian Army or Navy or Air force. 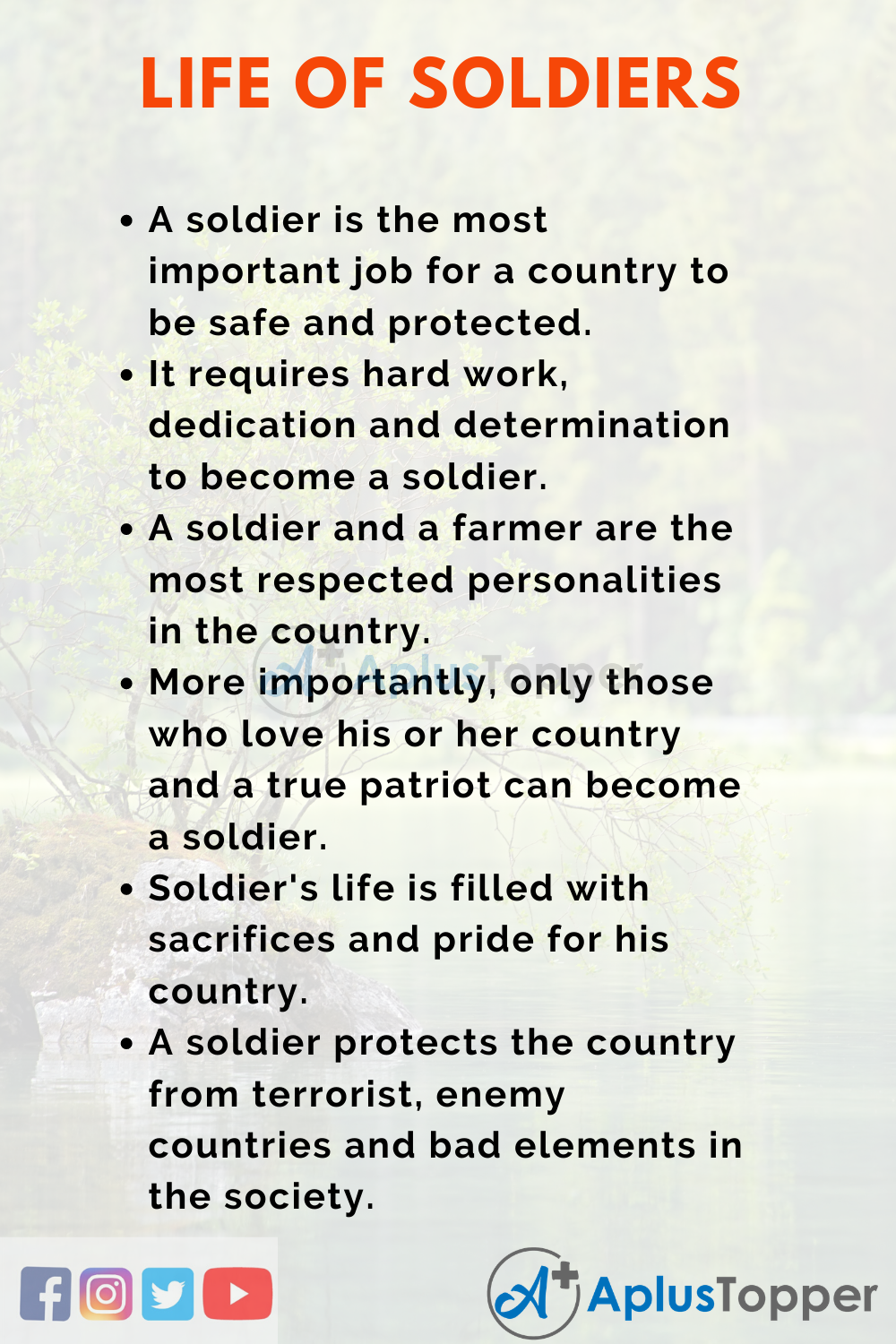 Short Essay on Life of Soldiers 200 Words in English

A soldier is the most important asset to any country. He is considered to be the hero of the masses. A soldier puts his or her life in danger in order to protect the country from any impending dangers. A life of soldiers is filled with sacrifices and stories of bravery and courage. From fighting enemies in the front lines at our border to rescuing citizens of the country from earthquakes, floods or conflict zones, a soldier’s importance in our lives are plenty.

Soldiers life is a life filled with pride and dignity. A soldier when in his hometown gets more respect than any leader. A martyred soldier gets massive state respect for his or her last rites. All these are done to show how important a soldier is to a country and its safety. And it is not an easy job to become a soldier. You need a lot of dedication and will power to go through and clear the training process which will be hard and rigorous in nature. Every law-abiding and nationalist citizen if country should respect and love his soldiers because it s because a soldier does his job in the line of conflict that we can sleep peacefully at our homes. we will soonly update Life of Soldiers Essay in Hindi, Kannada, Marathi.

10 Lines of Life of Soldiers Essay in English FAQ’s on Life of Soldiers Essay

Question 1.
Who is the father of Indian army?

Answer:
Stringer Lawrence is known as the father of Indian Army

Question 2.
What is the role of a soldier for a country?

Answer:
A soldier protects his countrymen from enemies and rescues the citizens in times of crisis

Question 3.
How many soldiers are there in the Indian army?

Answer:
There are more than 1.4 million soldiers in India

Question 4.
Which is the world’s largest army?

Answer:
China has the world’s largest army with 1.6 million troops

Question 5.
How many wars has India fought?