Letter To Editor (LTE): A Letter to the Editor is a letter written to the editor of daily printed publications to highlight the social issues of concern. In other words, it is a formal letter sent to a newspaper or a magazine to discuss the problems from its readers. The format of the letter should be followed strictly. It can also be written to get it published either through conventional mail or electronic mail. Usually, letters are intended for publishing in newspapers and magazines. But, sometimes published in other mediums like entertainment and technical magazines, radio and TV stations.

In general, Writing a Letter to Editor Format will be seen in the first section of a newspaper or at the starting of a magazine. It describes for or against an issue or both. It can be written to create a lot of community discussion and stimulate the interest of the news media. A Letter to the Editor has already been a feature of an American newspaper. Early American newspapers delivered many news reports and commentaries published by them in the form of letters.

Editors read all submissions but most will automatically reject letters. Rejected letters include personal attacks to individuals or a particular organization, profanity, libelous statements, unreasonably lengthy or submitted anonymously. The larger the newspaper or magazine, there will be more competition for LTE space. That means you need to write a prominent letter in order to get printed. Submitting an LTE under a false name to criticize an opponent can have important consequences.

Reasons for Writing A Letter To The Editor

How To Submit a Letter to the Editor?

In general, every print publication prefers to get letters and other material through email. Since everything they publish is available on a computer and printed from software. You can still send a postal letter but it’s time- consuming and you have to wait longer after it’s received for printing. Make sure to submit the letter in MS Word as an email attachment to the editor. Submit your letter after the publication of the original paper.

Then, the editors will attempt to include your letter in the next journal issue. Only high quality and sound scientific principles letters will be published. All submitted letters will be reviewed by the members of the Editorial Board. It depends on the editors on whether or not to publish the letter. The editors have the right to shorten and edit the letter if required.

How Can be A Letter to the Editor Accepted

A Letter to the Editor will get published depending on a certain extent on the publication. The New York Times probably receives thousands of letters a day but only some will get printed. However, in small-towns, newspapers may print every letter as it may get only two or three a day. In general, newspapers and magazines will publish letters that represent particular points of opinion on issues, well-written, and articulate issues and events. Most publications stay away from publishing attacks on particular people and libelous statements.

The following tips are helpful for getting your letters accepted by the editor:

Letter To The Editor Format

Make sure to write your full name, signature, and designation, if any. You can also include your address, phone number, and email.

Letter To The Editor Template

Sample 1 – Letter To The Editor on Social Problems

You are Shilpa S, a member of NGO Sargam. Write a Letter to the Editor for a public campaign to clean the Yamuna river.

Subject: Need for a public campaign to clean Yamuna river

I am Shilpa S, a member of NGO Sargam. I am writing to you in order to highlight the declining situation of the river Yamuna.

The city of Delhi is getting polluted water from the Yamuna river. The residents are being blamed for this. They pollute the river with muck, dirt, and garbage. The river water is filled with waste materials, plastic, bacteria, and chemicals. It is not in good condition for consumption.

The public has been trying for a Water Treatment Plant. Still, the authorities have not responded to the continual requests.

Therefore, I request you to highlight the issue in your newspaper and generate public interest. We all have to come forward to set up the plant in the area. 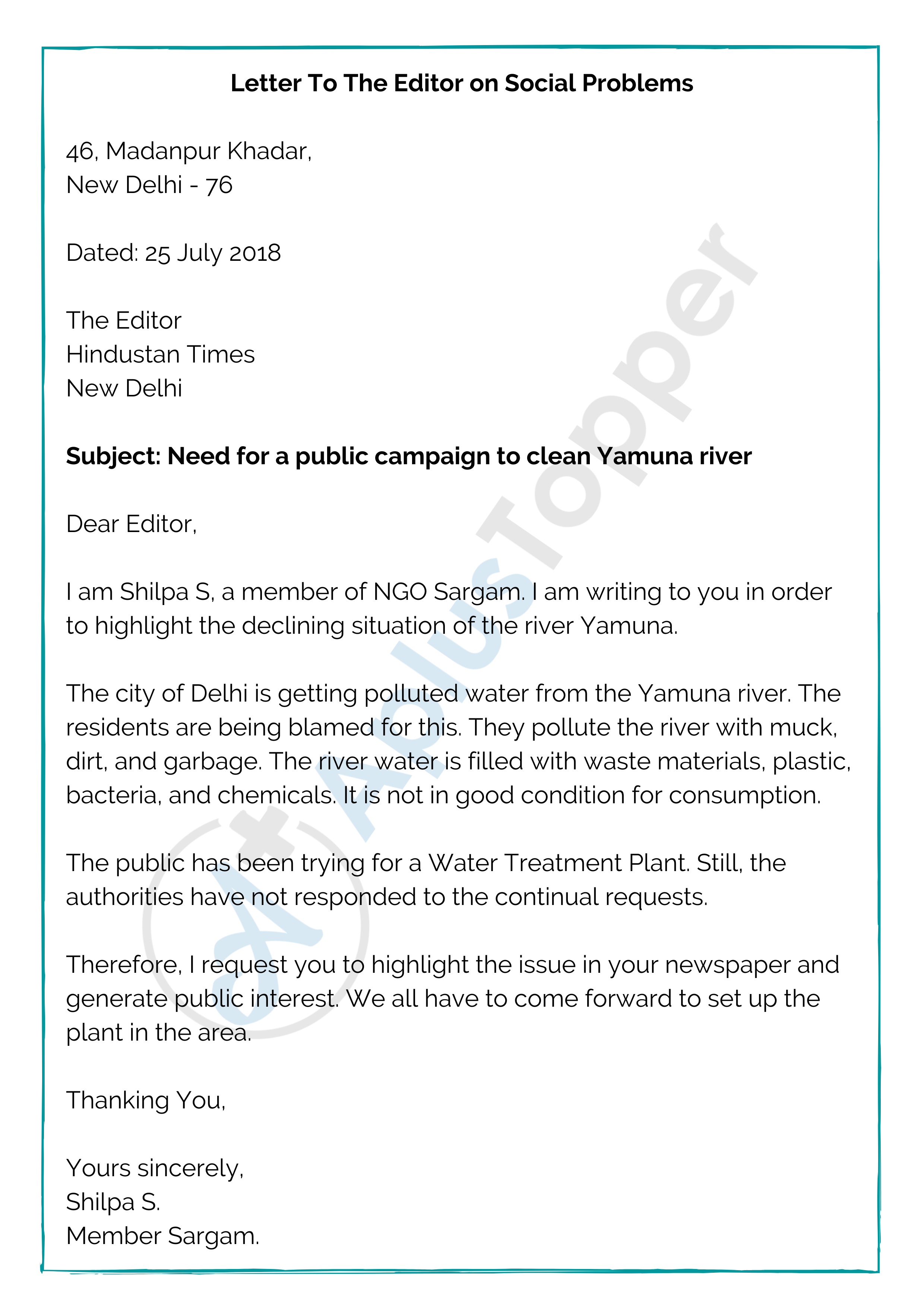 Sample 2 – Letter to The Editor About Road Problems

You are Raman studying in the Public School of Mumbai. The road leading to your school is full of potholes and also congested. Most of the working-class people are staying in this locality. They are very often stuck in traffic jams. The Government has not taken any action till now for road construction. Write a letter to the Editor of ‘The Times of India’ drawing the attention of the Govt to the issue faced by the people, requesting them for road construction.

The Editor
The Times of India
Mumbai

Subject: Construction of Road in Gandhinagar

I am Raman, a resident of Gandhinagar. I am writing to you in order to raise the issue people face in my locality due to the bad condition of the road.

The road leading to Public School is so congested throughout the day. It is the main road but there are potholes everywhere on the road. Mainly during the morning hours, people are facing horrible situations when they are going to their workplaces. A Public School is also situated on this road. So, school students and parents get irritated as they are stuck here very often in traffic jams. These locality peoples made many representations to the government, but no action has been taken so far to improve the bad condition of the road. That is why now through this letter we want to draw the attention of the Govt.

As the situation is not good, I request you to highlight it through your newspaper. So that the Govt will take some action to improve the road condition. 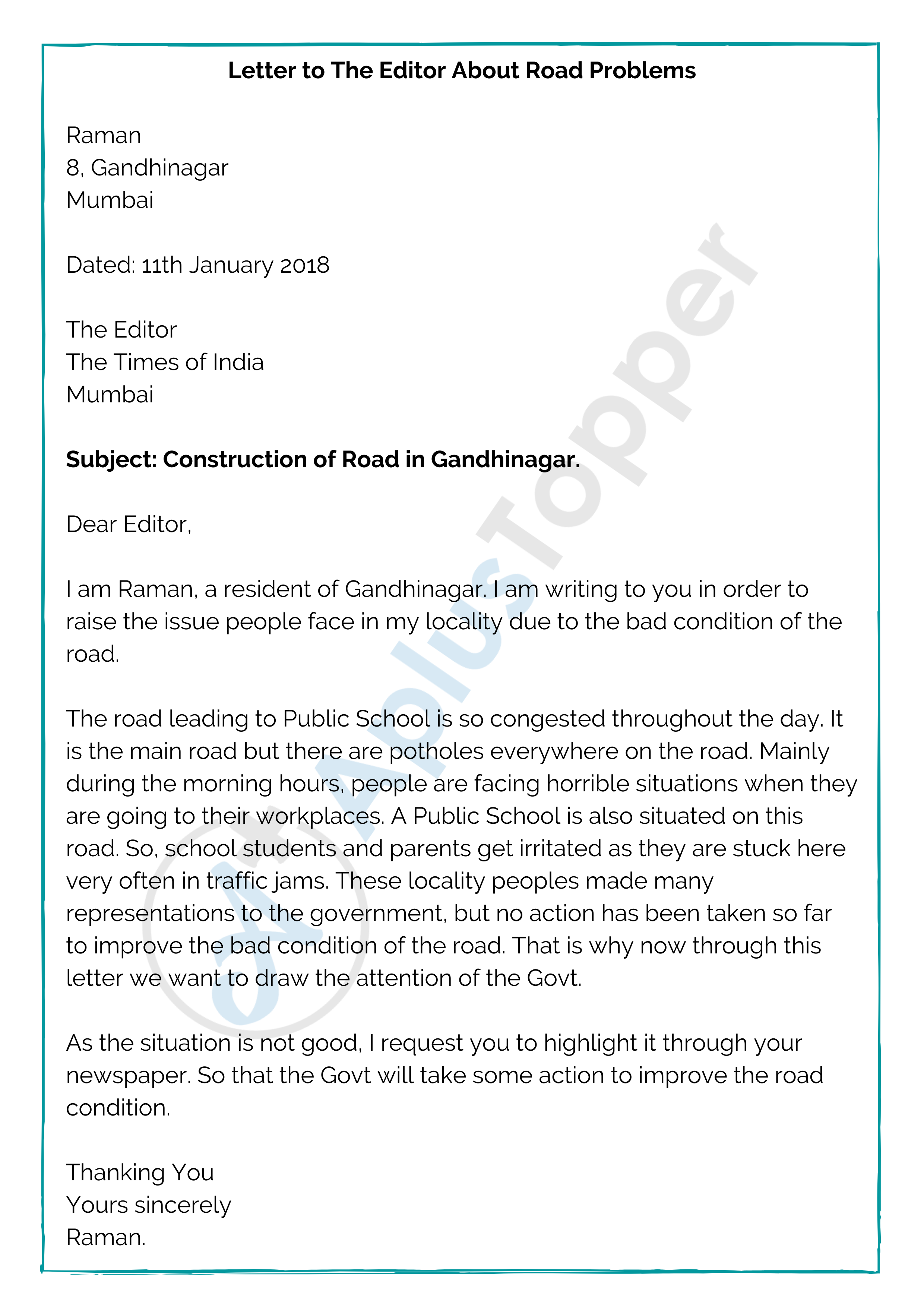 You are Vikas, a resident of Mayur Vihar, New Delhi. Write a Letter to the Editor of ‘Hindustan Times’ to highlight the absence of a playground in your locality.

Subject: Absence of playground in our locality

I am Vikas, a resident of Mayur Vihar. I am writing to you in order to bring the attention of the concerned authorities towards the absence of the playground and sports facilities in our locality. These are the necessary activities for all age peoples in current times. The increase in pollution, contracting open space due to industrialization, an increase in traffic, etc. have contributed to the decline of the environment and human health. The absence of open spaces in the residential areas and townships has further provoked the issue. The lack of playgrounds and open spaces has deprived the joy of children playing outdoor games. So, it has affected their physical growth and development.

Through the columns of your reputed newspaper, I request the concerned authorities to look into this problem. So that they will provide a playground and sports facilities in our locality.