8 Letter Reprimand Samples: A letter of reprimand is a procedure that comes under the United States Department of Defence. It is a letter given to a soldier or an employee detailing the wrongful actions of the individual and the consequences or punishments that are to follow. Formal Letters of Reprimand are kept on the record and can affect the person’s career. It is also called the letter of admonition in a legal context. Under the Code of Professional Responsibility, it is considered of the lowest form when it comes to attorney discipline.

Letters of reprimand can sometimes serve as a warning before employment termination or a notice about the disciplinary action to be taken, under which termination, demotion, or suspension can come under. In this article, we will look at eight different samples of letters of reprimand that you can use as a template for yourself if you ever would need to write such a letter.

Re: Letter of Reprimand

You failed to fulfill your duties with integrity, and the severity of the actions that you performed justifies all of the disciplinary actions that may lead to the termination of your employment.

You committed an earlier offense where you have revealed confidential information, and that action led to verbal counseling. Further diligence is required of you in performing your future duties. If this happens another time, added disciplinary action would be taken, and termination of employment is almost inevitable then. 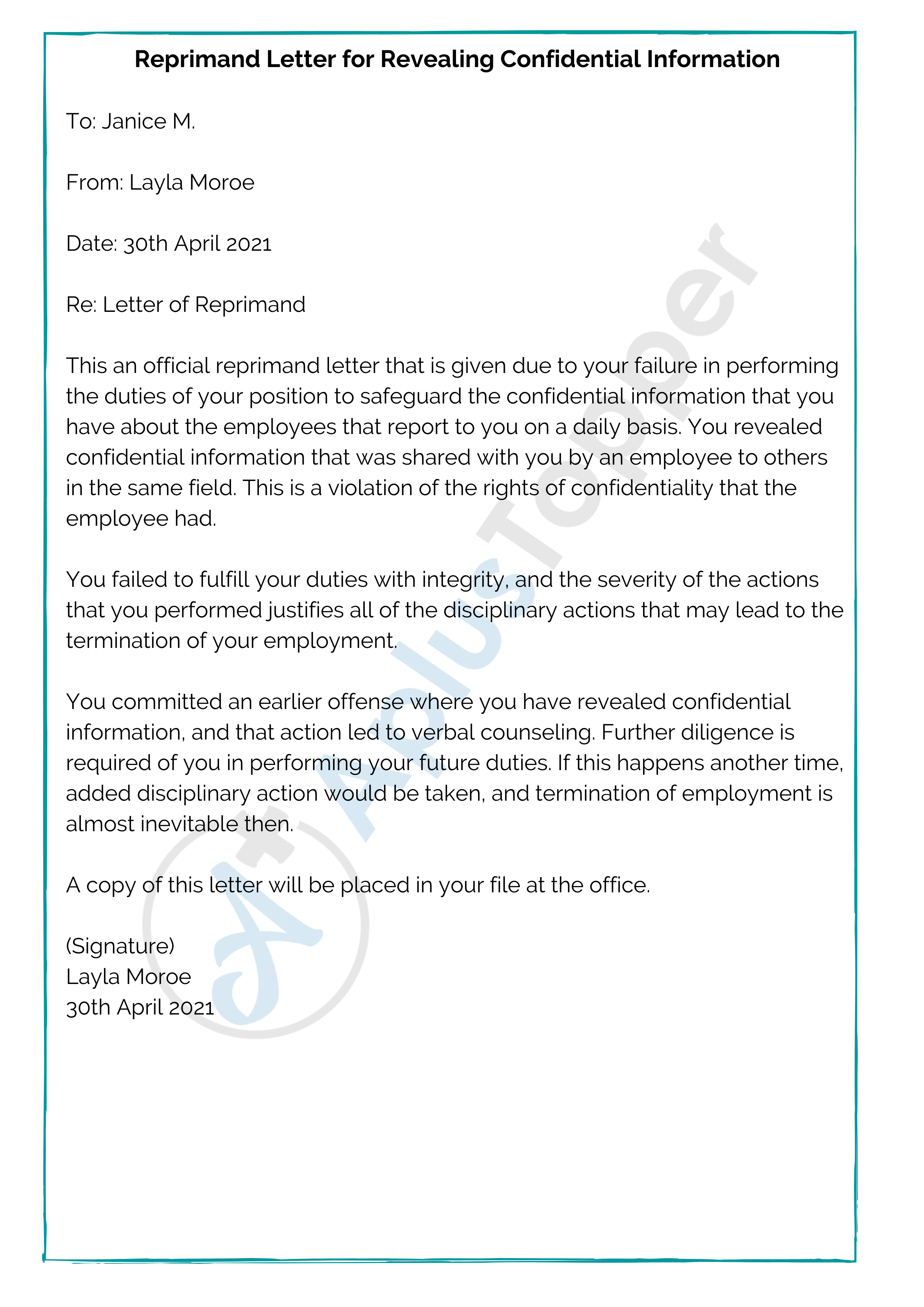 Reprimand Letter for Lack of Improvement

Re: Letter of Reprimand

This is a formal letter of reprimand for the work performance you have thus far exhibited. Your work has seen no improvement whatsoever despite constant encouragement, coaching, as well as suggestions from your supervisor and colleagues.

On-job-Training was also provided, which you failed to learn from. Multiple methods were used to try to teach you, yet there was no visible improvement at all. Your performance has been rated most unsatisfactory by all of your mentors that have been assigned to train you. Your output remains at 30% as compared to your colleagues and has grown no further. If you do not show any signs of improvement in the next two weeks, you will face employment termination. 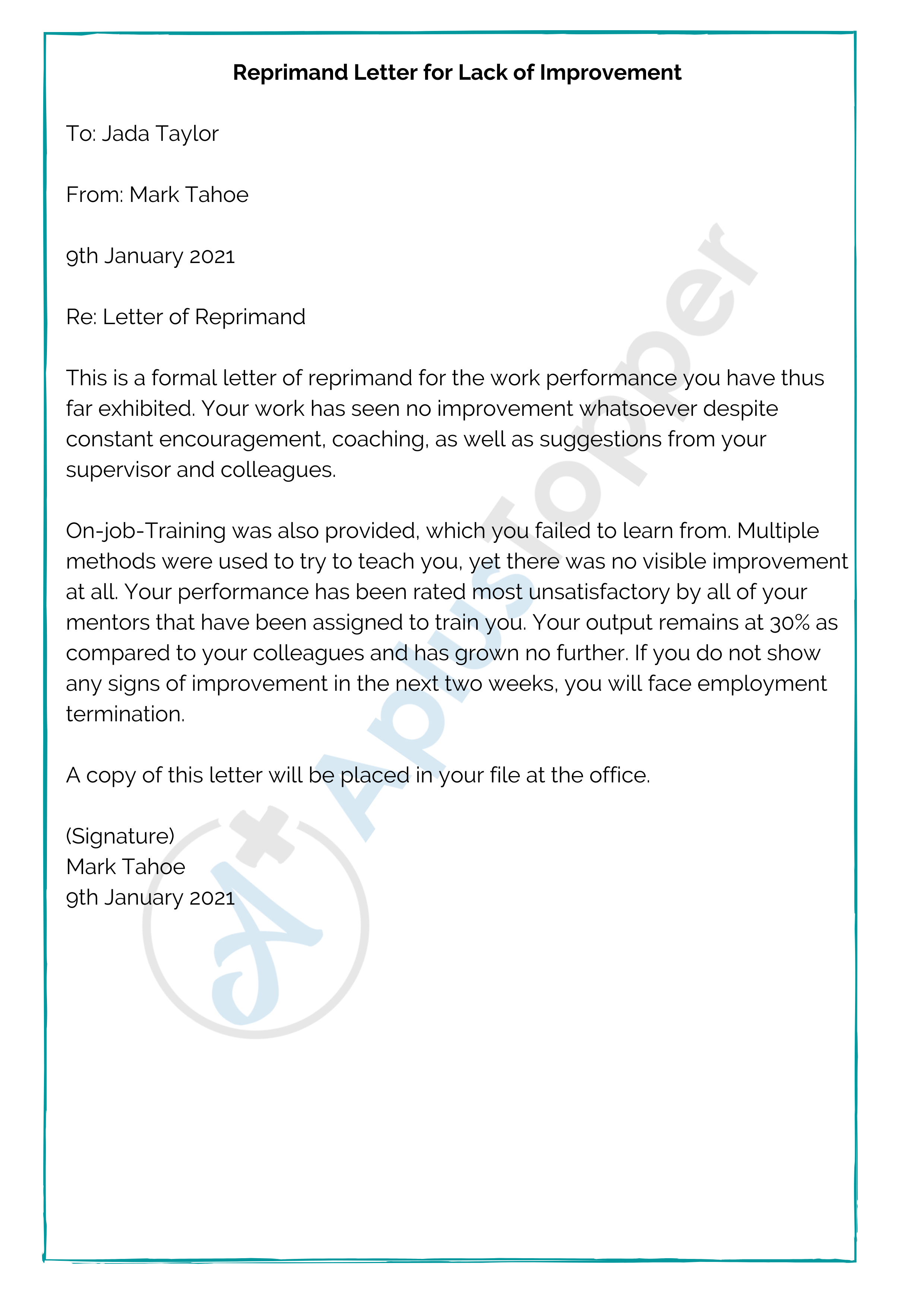 Re: Reprimand for Tardiness

This is a reprimand letter for your tardiness that has occurred four times in the last two weeks. You arrived more than 30 minutes late, and this is unacceptable. Your tardiness forces us to ask another employee to do your work. This is a disrespect to the schedule of others and creates overtime expenses.

Verbal counseling and a verbal warning have both been given to you, neither of which has resulted in you coming on time. If you continue this tardiness, you will receive disciplinary action, which can result in the termination of your employment.

Reprimand Letter for a Mistake Made in Surgery

On the 4th of February 2021, in the Wylder Clinic in Harwich Port, Massachusetts, you performed a partial medial meniscectomy, left knee arthroscopy, open distal patella realignment, and an arthroscopic lateral release on a 35-year-old male patient. Surgery was not eventful on all counts. However, six hours after discharge, the patient was in the ER with complaints of bleeding through the dressing and severe knee pain. Radiography shows a retained guide pin from the operation, and the object had to be removed. The Medical Board has suspended your practice until after future disciplinary hearings that will take place. The first will be on the 20th of February, 2021.

This copy will be filed in your file. Make sure you are at the hearings. 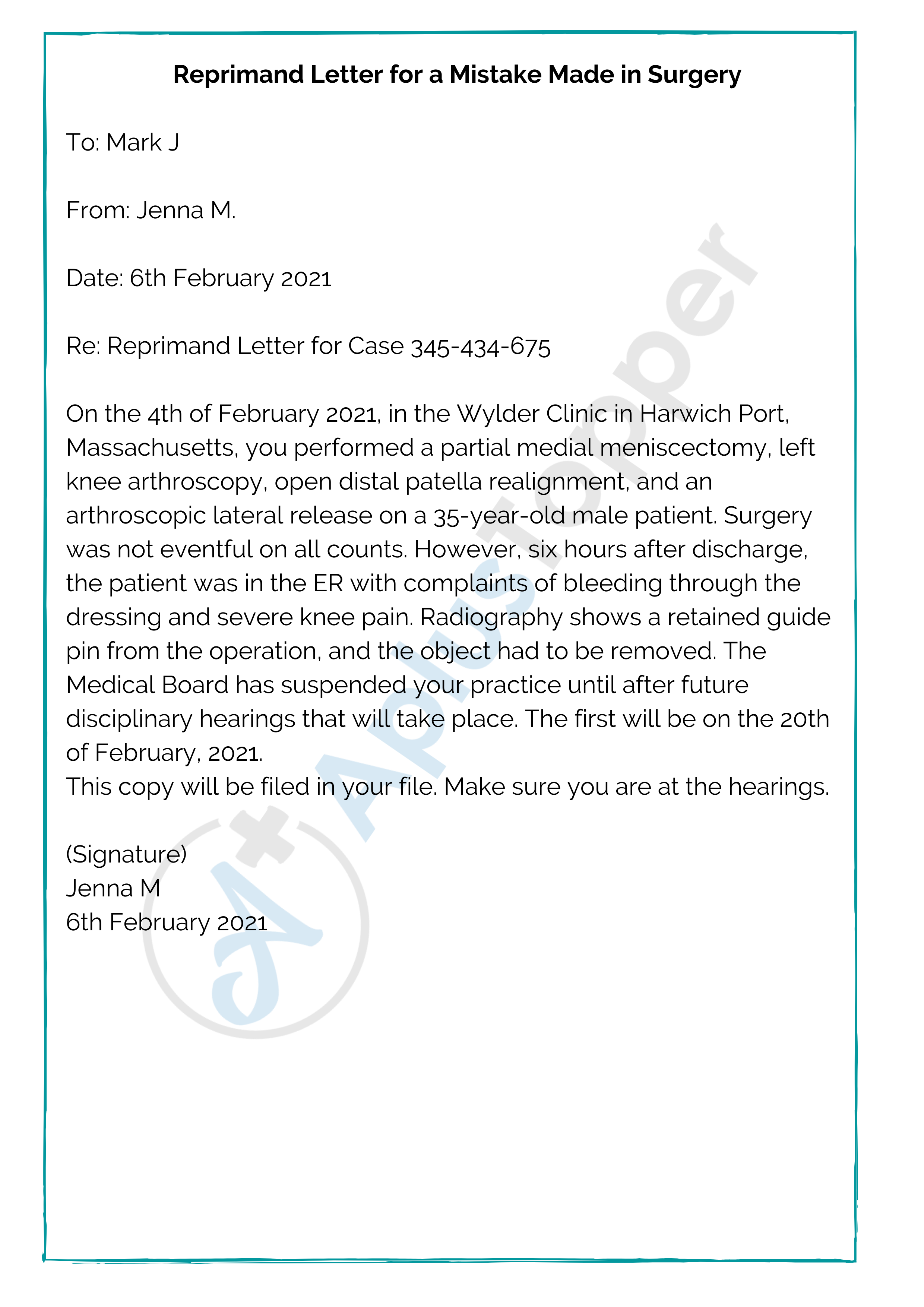 Re: Reprimand Letter for Negligence

On the 4th of August 2021, a family of seven came in to the restaurant, Olivia Grove, at 7 PM. They ordered many dishes, including a Chili Con Carne, which was also to be eaten by a child of thirteen. The waiters were notified not to use nuts due to her allergies, which was duly noted to you.

Due to your negligence, peanut oil was used in the food, and the child went into anaphylactic shock and only survived as they carried epinephrine with them. You will be called in for a disciplinary hearing on the 10th of this month. As of right now, you are no longer employed with Olivia Grove as your employment has been terminated. 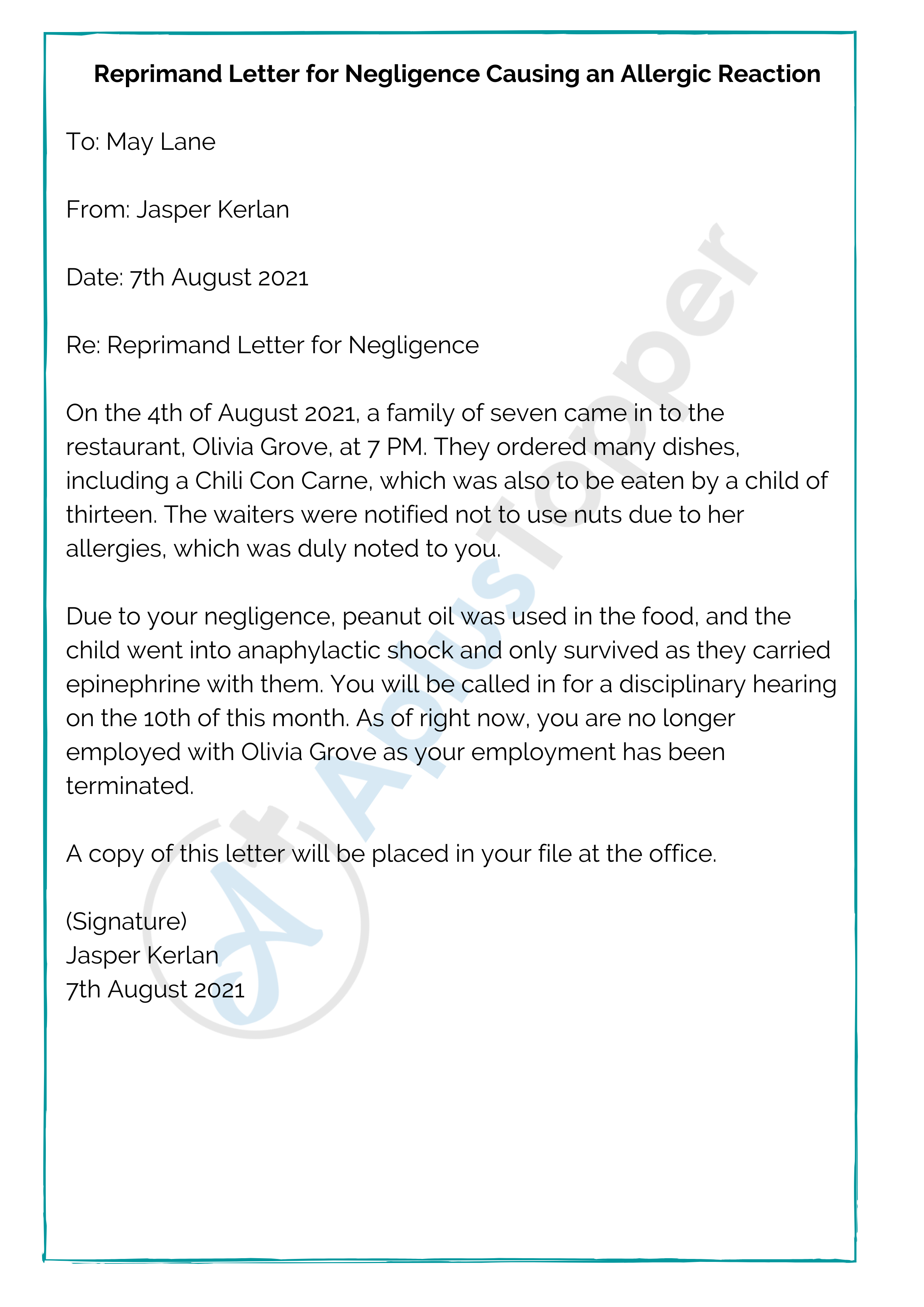 Re: Reprimand Letter for Harassment

This is a reprimand letter for the harassment you have been causing to the employees that work under you. There are complaints against you for making employees work overtime, refusing to grant the yearly income, and verbal abuse. You received disciplinary action for a similar incident last year. An employee raised a complaint with regards to your harassing behavior with him as a senior. You were demoted from your position, and your salary was reduced.

As none of those measures has had an effect on you, you will face further disciplinary action that may include employment termination. You are removed from the position of manager until further decisions can be taken. Legal action will also be taken against you for the harassment that the employees under you have faced. Re: Reprimand Letter for Thievery

It has come to our notice, along with evidence, that you have been thieving from the register on your shifts as the cashier.  Approximately $2000 has been taken by you, causing the need for this reprimand letter. You have already received suspension earlier for stealing a console. You have disregarded what was told to you earlier and continued with this behavior.

You will face strict disciplinary action, including possible employment termination. Your thievery is a blatant disregard for our rules and the responsibilities placed under you. You will have to appear for a disciplinary hearing to discuss what is to be done about the money stolen. If you refuse to show up, legal action will be taken against you. Reprimand Letter for Insulting a Customer

Re: Reprimand Letter for Insulting a Customer

On the 20th of October 2021, an eighty-year-old woman came to the Jackson Electronics store where you are an employee. She requested information for a simple tablet that she would be able to use at ease. Instead of helping her, you mocked her for her inability to speak fluent English and asked her to leave the store. There is video evidence of this incident. The customer has chosen not to sue you and has left the determination of your punishment to us.

Such behavior is unbecoming of an employee at our store. We do not condone mockery of our customers, and you have been repeatedly informed to treat all of them with respect. Your choice to disregard this has resulted in this letter of reprimand. You will receive further disciplinary actions in the future. If this behavior is repeated, you may be terminated from employment.

Ensure that such an incident doesn’t happen again and that you respect all customers as they are. If you do not wish to comply with our standards regarding how we treat our customers, you are free to resign.