In the letter, the writer responds to criticism against him. He highlights the ideology of nonviolent protests. This letter belongs to the civil rights era.

Long Essay on Letter from Birmingham Jail 500 Words in English

Long Essay on Letter from Birmingham Jail is usually given to classes 7, 8, 9, and 10.

The “Letter From Birmingham Jail” has been written by Martin Luther King Junior in the year 1963. It is an open letter where he mentions that it is the moral responsibility of people to take direct actions if justice is not being served and break unjust laws. Laws are mere sentences made by people. According to King Martin Luther Junior, waiting for justice to come through the doors of the courts will never be fulfilled.

This letter by King Junior is directed to the eight white clergymen, who had publicly condemned his actions in Birmingham, in Alabama. He says that these men have goodwill and are sincere with their concerns. In the letter, Dr King tells the clergymen that he was upset about the criticisms made by them, and he wished to address their concerns.

King Luther Junior had been called an outsider, and he backs his presence in Birmingham with a moral reason which was, he was present in Birmingham to battle “injustice”. He feels the need to work for justice wherever injustice is prevailing. King Luther Junior believes that the white clergymen had criticized the protestors without even exploring the racist causes of the protest.

The primary purpose of King’s letter is to advocate for the abolishment of the racial segregation and pushing for the freedom of those Black Americans who were dominated in the white American dominated society. King Martin Luther appeals to emotional, ethical and logical based appeals. This letter is full of the terrible things that the whites have done to the black Americans. He also mentions how difficult it is for children to go through the discriminations that the blacks go through.

King Martin Luther Junior used the opportunity of the letter to bring everybody to speed up to about the protests taking place in Birmingham. Martin Luther feels exceptionally disappointed with how the white community ignores the sufferings of African Americans. Equality was promised previously, which was later not followed.

In Birmingham, a variety of nonviolent methods have been used, but the city had received a court order to suppress all the ongoing protests. With the conviction of the order, the supporters had to undergo detention with Martin Luther Junior selected as one of those to be arrested. Throughout the letter, Martin Luther tried to state the purpose of his battle, which was injustice and inequality.

In the latter part of the letter, King criticized how the clergy praised Birmingham police for maintaining order in a nonviolent manner during the protest. It is a stark contrast to their normal behaviour with black Americans. King had praised the nonviolent demonstrators for their courage and will to suffer as well as their way of maintaining discipline at the hour of provocation. There are two main types of laws, just and unjust laws. Both hold morals and responsibilities. But an unjust law can never provide justice. An unjust law is no law at all. 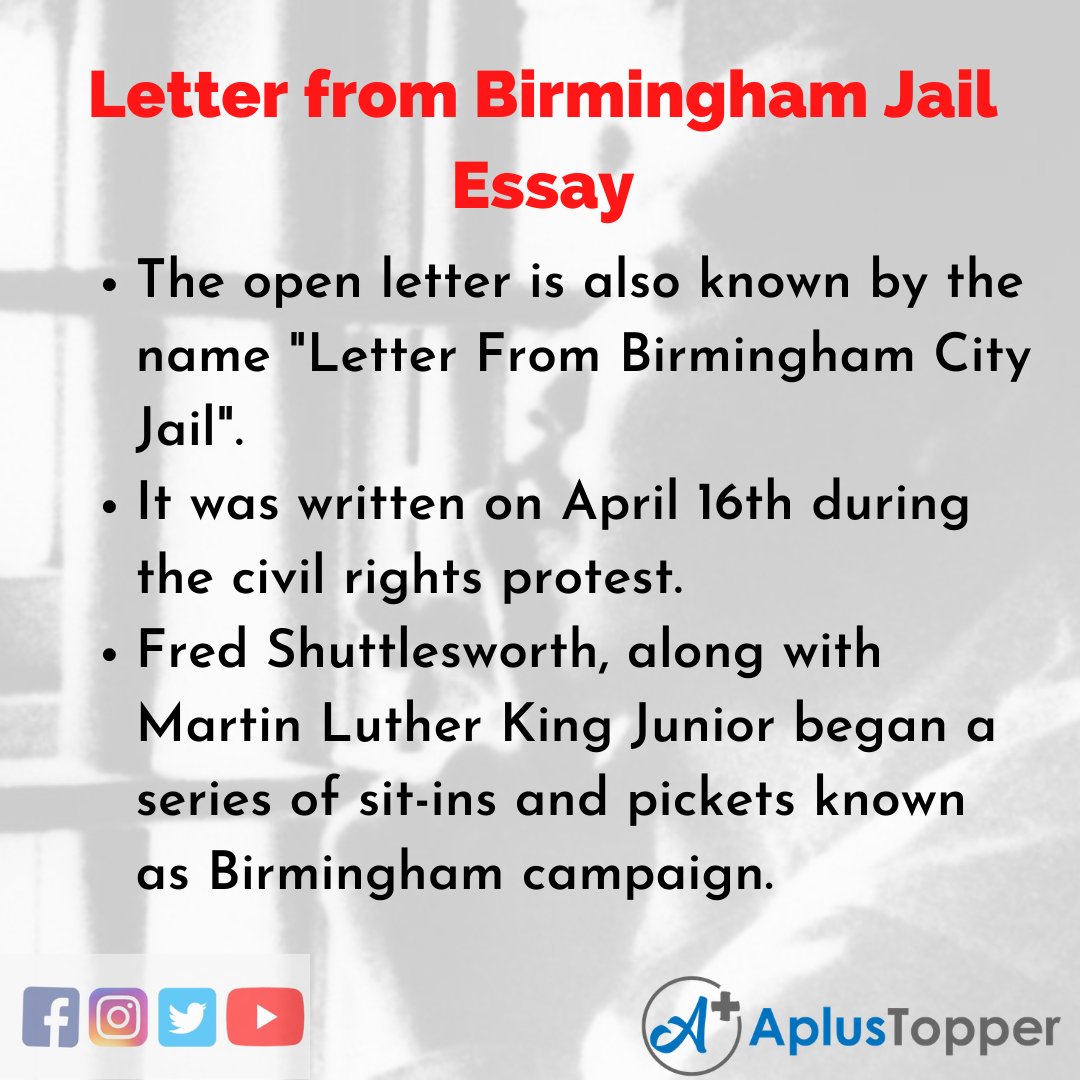 Short Essay on Letter from Birmingham Jail 150 Words in English

In this letter, the writer King Martin Luther Junior is writing for two types of audience, the blacks who have associated themselves from the moderate faction of the civil rights movement and the whites who do not support the movement and its actions and ideologies. King explains the harsh reality of being inferior in a segregated society to the latter part of the audience.

He explains the heart-wrenching pain when the black children realize that it is because of their colour; they are looked down upon and treated differently. He explains how segregation is used to debase one community to uplift the other.

King appeals to his readers a sense of justice and morality, calling segregation an enforceable and unspoken law. The people must oppose segregation by refusing to abide by the so-called unjust laws of the society that are made by humans themselves. King foresees a future, a better Birmingham where children would be able to reach their goal of freedom.

10 Lines on Letter from Birmingham Jail in English 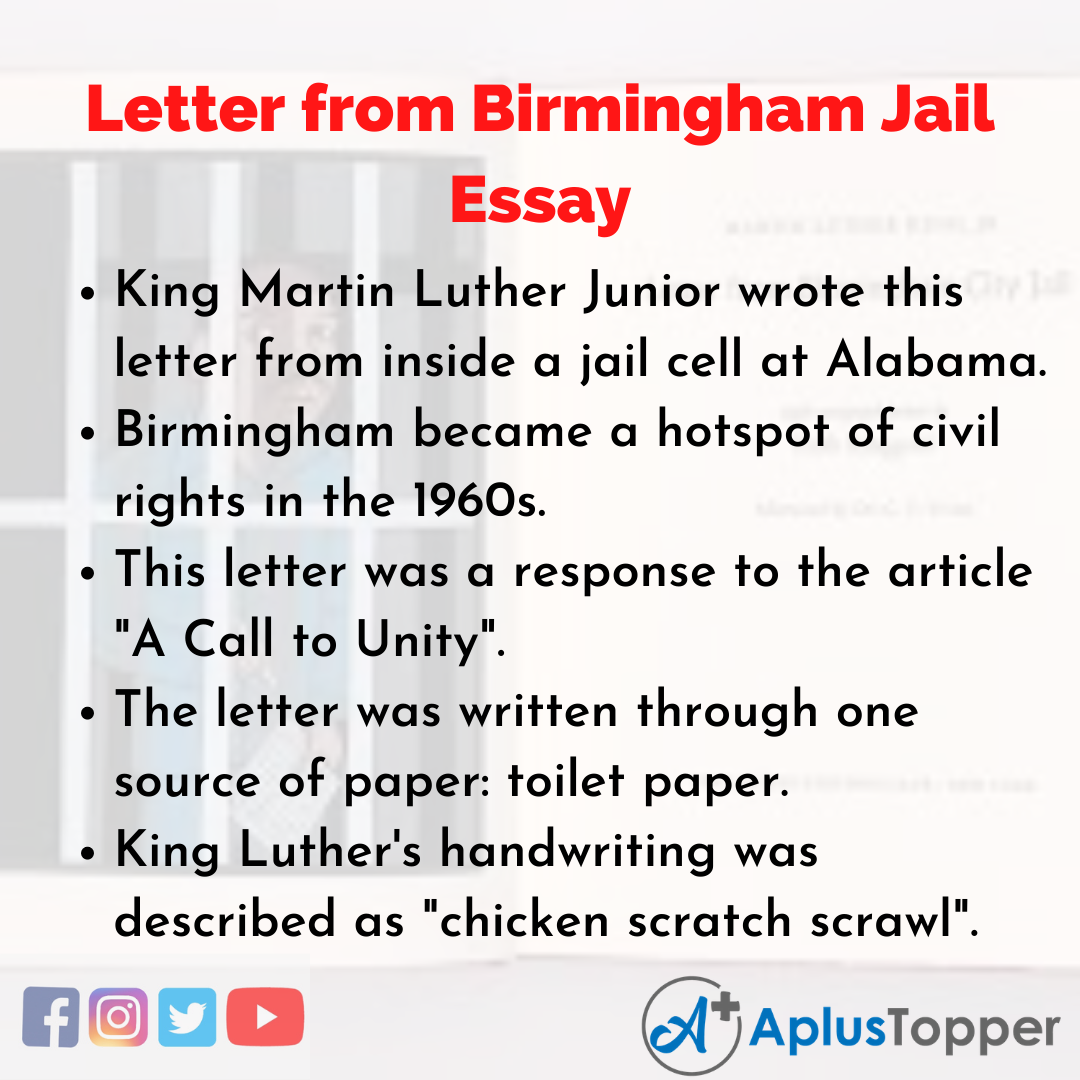 Question 1.
What is the theme of the letter from Birmingham jail?

Answer:
The theme is about legal equality, economic and social equality.

Question 2.
What was the name of the speech given by King Martin Luther Junior?

Answer:
“I Have A Dream” was the name of the speech given by King Martin Luther Junior.

Answer:
He was born in Atlanta, Georgia in the United States.