Legalize Marijuana Essay: Marijuana, which has its roots in the Cannabis plants, comes in various nicknames. From pot to ganja, weed, there are lots of regional nicknames for marijuana. The leaves and the flowers of Cannabis plant form marijuana.

The main active ingredient in marijuana is the THC, or whose scientific name is delta-9-tetrahydrocannabinol, passes to the bloodstream and reaches the brain. This agent creates a relaxed feeling to the body.

We are providing students with samples of essay on a long essay of 500 words and a short essay of 150 words on the topic “Legalize Marijuana” for reference.

Long Essay on Legalize Marijuana is usually given to classes 7, 8, 9, and 10.

There have been lots of speculations about legalizing marijuana. Many believe that this drug has harmful effects on the human body, but there are hardcore facts which negate this belief. There are real benefits from marijuana which can weigh more than the supposedly negative outcomes. Arguments in favour of legalizing marijuana started in the United States of America. It is proven to have many medical benefits, as it relieves anxiety, provides relief from pain, cures tendencies of nausea, and is known to reduce epileptic seizures. There are a large number of states in the United States that allow prescribed marijuana use.

Medical Cannabis is often used for curing sleeping disorders, appetite losses, autism, are also associated with cancer treatments, like chemotherapy. Cannabis, if legalized, can also be used to treat anorexia. The immediate benefits of cannabis for medical uses can be seen in emotion and mood regulation. It is proven that marijuana causes minimal side effect if it is strictly used in regulated quantities.

The legalization of marijuana is also predicted to boost the economic growth of the country. As already seen from the examples of the states of Colorado and Washington State, the economic benefits from legalizing marijuana could be as high as $300 per year. The state governments will end up saving tons of taxpayers money if it decides to legalize marijuana. State governments employ a lot of money on those divisions of law enforcement who are responsible for holding up the laws prohibiting marijuana consumption. So many people are arrested every year for either consuming marijuana or possessing it, and the governments spend tons of money for keeping them imprisoned. This money will be saved by legalizing marijuana.

For those employed in law enforcement duties, they would also have to devote lesser times for chasing people who have committed such a petty crime. When the governments are keeping marijuana illegal, it is of little help in preventing drug abuse of the people. By making it legal, at least the law enforcement will have saved both labour and time.

Any prohibition put on marijuana causes an opposite effect on the public. There are less than 10% of countries who have legalized marijuana. Other countries where this drug is illegal contributes to almost 58% of the younger generation being active users of marijuana. This drug has taken the lead in becoming one of the most prominent drugs that are used by teenagers and adults. When illegality has proved not to be of any effect, maybe legalization can be fruitful.

In the countries where marijuana is legalized, it has not caused any apparent damage. Some stereotypical beliefs surrounding marijuana is that its consumers are violent. But to date, there is no concrete research that can adhere to this statement. There are many states in the United States which have legalized marijuana for both medical and recreational purposes, with no negative results. As against this, Colorado has shown signs of decreased property damage and violence by marijuana users. 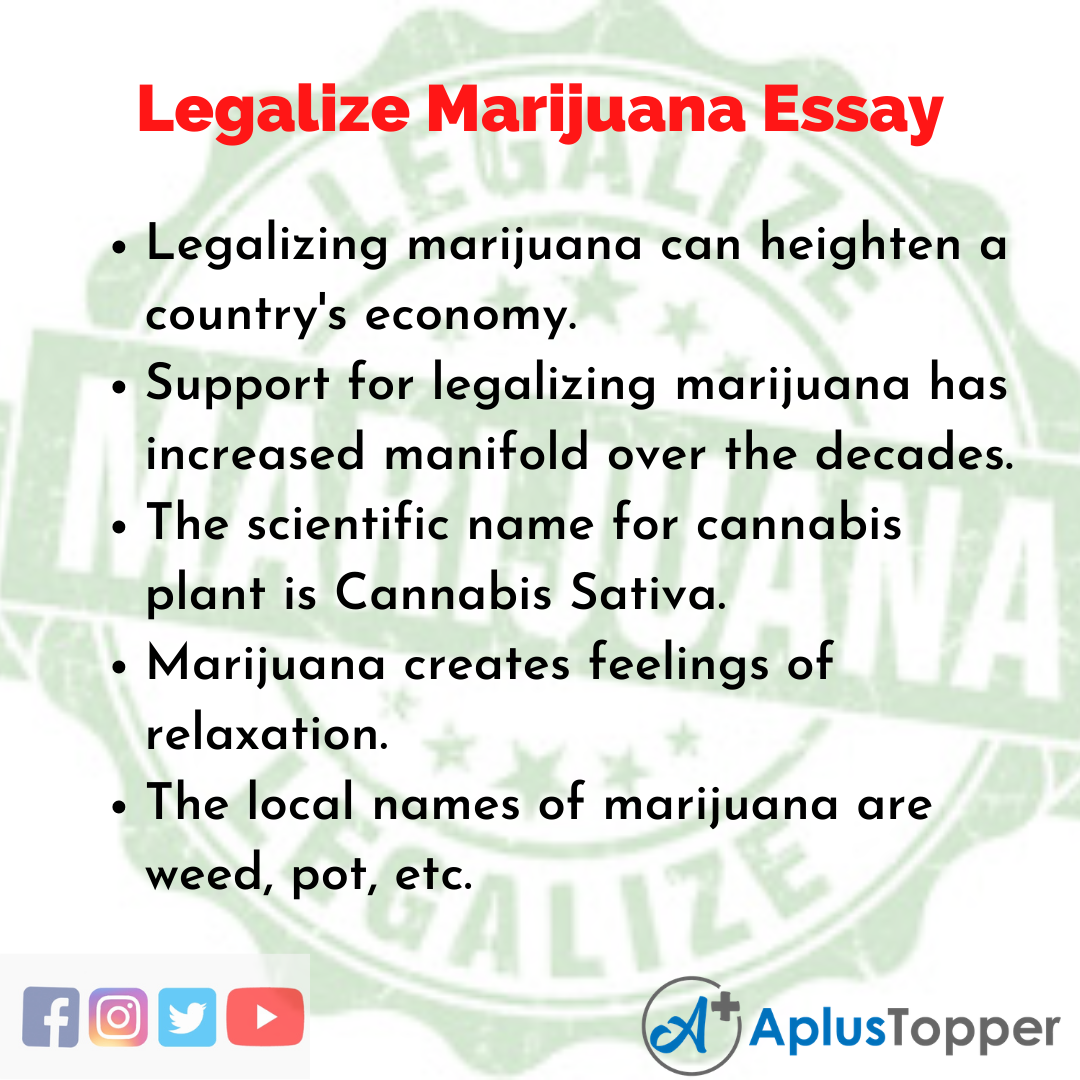 Marijuana, which originates from the cannabis plant, is often termed as a harmful drug. The governments of several countries are in strong favour of keeping it illegal. But these countries overlook the numerous benefits of authorizing marijuana, be it for health or economy.

Cannabis has endless health benefits; from treating nausea to body aches, to serious diseases like cancer and autism. For monetary matters also, legalizing marijuana can prove to be beneficial. Much of the tax money goes to upload law prohibiting marijuana, which can be saved. Labour and time on the part of law enforcement staffs can be saved as well.

In several states of the United States, drug overdose had been the foremost cause of death, especially among the youth. It was found later that the death rate due to marijuana consumption had decreased by over 30% after legalization. This is living proof as to how legalizing marijuana can help the countries and society.

10 Lines on Legalize Marijuana in English 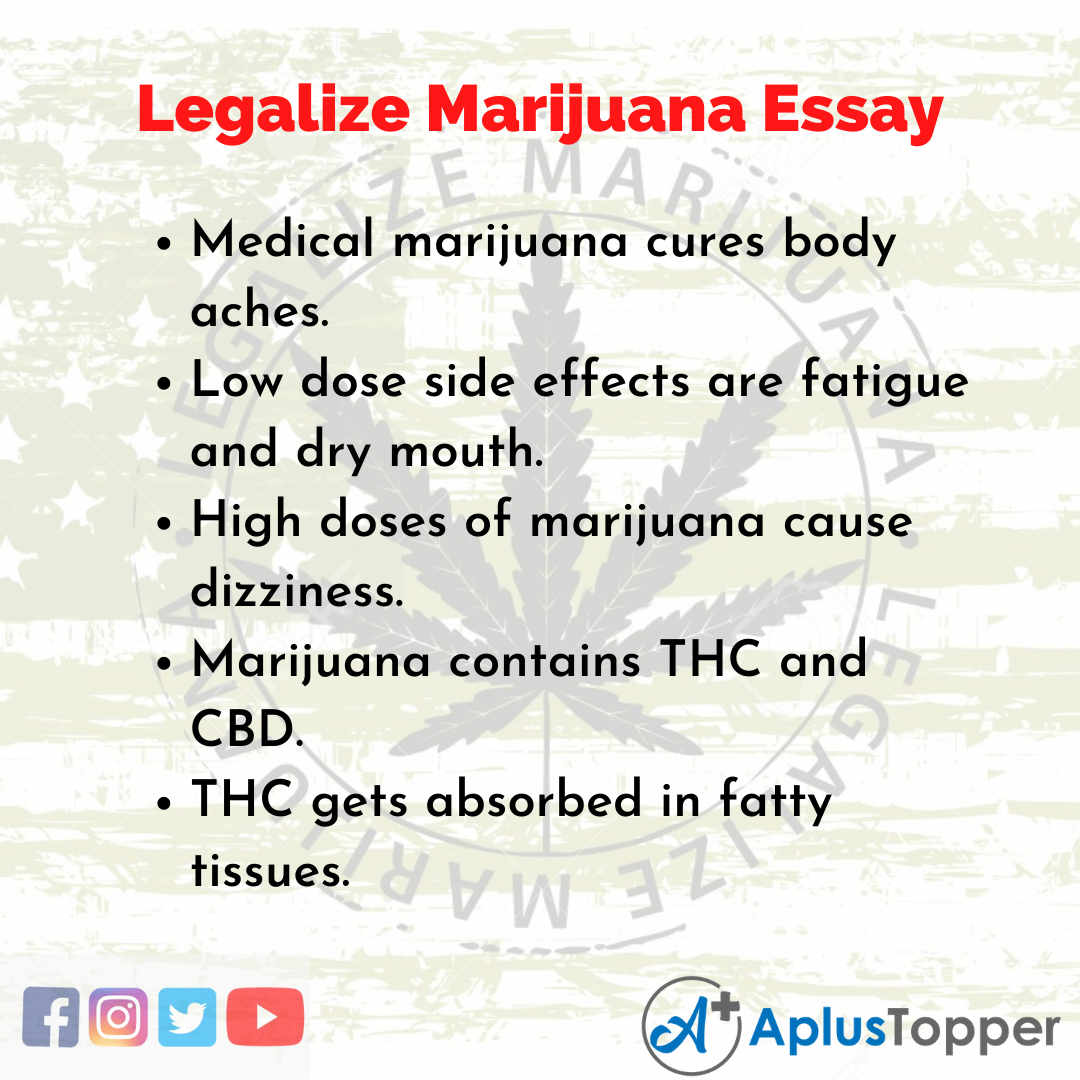 Question 2.
In which countries can a physician authorize marijuana?

Answer:
In Australian countries, and a few countries of South America, like Brazil, marijuana can be prescribed.

Question 3.
Where can we find THC in marijuana plant?

Answer:
The major proportions of the THC compound can be found in the buds or the dry flowery portions. This THC travels through the bloodstream to the brains and other organs of the human body.

Question 4.
What are the detrimental effects of marijuana on the brain?

Answer:
Long term uses of marijuana can cause memory loss. It complicates one’s sense of balance by corrupting the cerebellum. There are high chances of depression from heavy regular doses of marijuana.