Land Pollution Essay: Land pollution is a catastrophic problem that our society has been facing ever since the rapid growth of industrialization and urbanisation. There are plenty of reasons why land has been polluted by human beings. In this particular land pollution essay, we will be discussing in detail why land pollution is increasing and what are the remedies for it.

29% of the earth’s surface is made up of land on which plants animals and human beings live. Land pollution refers to the degradation of land, soil and its nutrients due to various human activities such as deforestation, urbanization, agriculture activities, etc. The land consists of forests, mountains, rivers, lakes, cities, villages and other settlements. The land sustains life on earth. It is because of the land that we can produce food that sustains our growing population boom. Also, forests that stand on land sustains all the living beings, from animals to plants and trees and even the grasslands.

When we refer to land pollution, we mean the degradation of land and its fundamental properties. these include removal of its nutrients, desertification and ultimately making it a barren land, which means that a particular piece of land cannot support life on earth.

But in recent years, the land has been over-exploited by man because of his need and greed. There are plenty of reasons for the pollution of land, some which are,

Agricultural activities have been a pivotal reason for the degradation of land. There are certain harmful agricultural practices that farmers follow in many countries that have led to this problem. Burning of land is one of the biggest causes of both land pollution and air pollution. Burning of the land after harvest helps in regaining the nutrient in the soil. But this land will lose its original nutrient and humus capacity thereby turning it into a barren land after a few years. This crop burning activity will also cause lots of air pollution because of the release of high amounts of carbon dioxide into the atmosphere. Statistics suggest that the high level of pollution in the capital city of India, New Delhi, is because of the crop burning activities in the neighbouring states.

Other than crop burning, farmers tend to clear forest covers in order to convert it into agricultural land. This practice, on a large scale, will lead to massive deforestation. Once the land is cultivated, farmers tend to move to other nutrient-rich pieces of land thereby making the previous piece of land abandoned and barren. This practice on a repeated cycle will lead to desertification of the land. We can’t entirely blame the farmer for this situation. Lack of knowledge and technical expertise in good agricultural practices has led to this problem. Governments need to educate and create an awareness campaign for the farming community to follow judicious and environmentally friendly agricultural policies. Also, there should informative awareness campaigns for family planning and proper laws and regulations in place to control the growing population of India.

With the increase in population, it has been difficult to control the expansion of cities. Metropolitan cities like Bengaluru, Mumbai or New Delhi has been increasing and gulping up its neighbouring towns due to lack of space within the cities. The reasons for this rapid urbanisation are many, some of which are migration of people from rural to the urban area in search of a better livelihood, increase in market size for industries to open up, improvement in consumer demand and technological advancements. This has led to garbage disposal problems leading to massive exploitation of open lands.

Large factories, sky scrappers, airport, damns, bridges and other infrastructural development in the country are putting massive amounts to pressure on our lands. To feed the growing population in cities, deforestation is taking place for agricultural purpose, to feed the growing thirst of our population, groundwater is getting depleted at an ever-increasing rate. If the same tendencies continue, experts have predicted that the survival of the human race in the next 50 years will be a big question mark.

As much as oxygen is important for the survival of living beings on earth, the land is also necessary to sustain life. Without land, no living being can continue on this planet. Collectively, it becomes our responsibility to formulate strong and effective laws and regulations to prevent further land pollution. It is not just the responsibility of governments or a corporate house, each individual citizen needs to take care of the environment to leave earth as a better place for future generations. 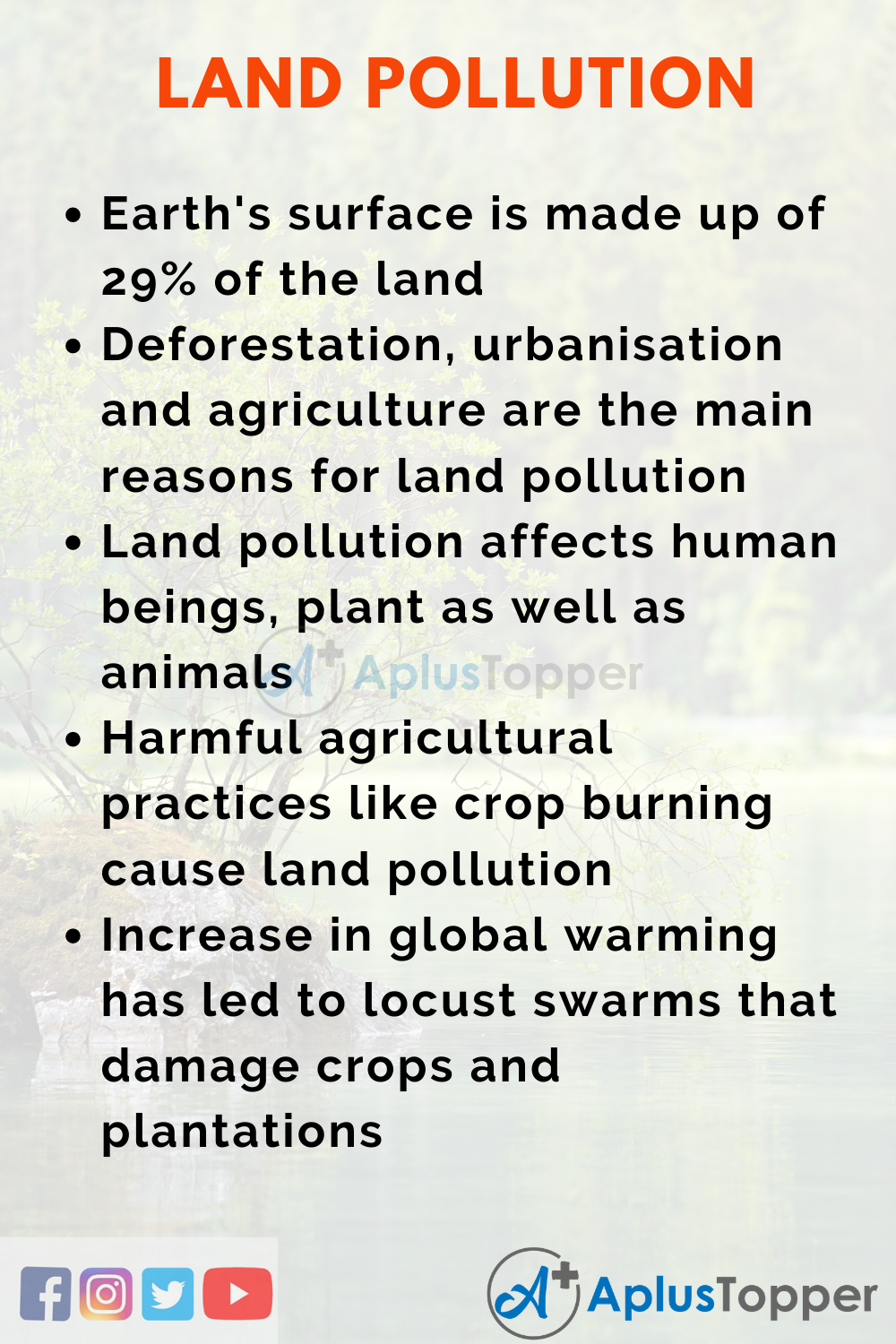 More than 29% of the earth’s surface is made up of land and this land supports life on earth. It provides food for animals and human beings alike provide shelter for animals, trees, plants as well as human beings. But these resources that nature provides us with has been over-exploited by human beings.

From deforestation to urbanisation to industrialisation to agriculture and global warming, land pollution has seen an ever-increasing curve in the last 50 years. The percentage of barren land in the world in increasing exponentially causing serious concern for scientists across the world about the grim future for mankind. Without fertile land, we can’t produce food. One one hand there would be food shortages while on the other hand, the population is doubling every year in many countries. Given such a tricky situation, scientists have predicted that there would be no food to feed our growing population in the next 50 years. The third world war will be fought for fertile land and food.

But not everything will be downhill if we take proper care and precautions now. All countries need to come together and formulate international laws on how to use land judiciously. A break should be put on rapid urbanisation, garbage disposal mechanisms and industrialisation in developing countries. The carbon footprint by developed countries should also be reduced. 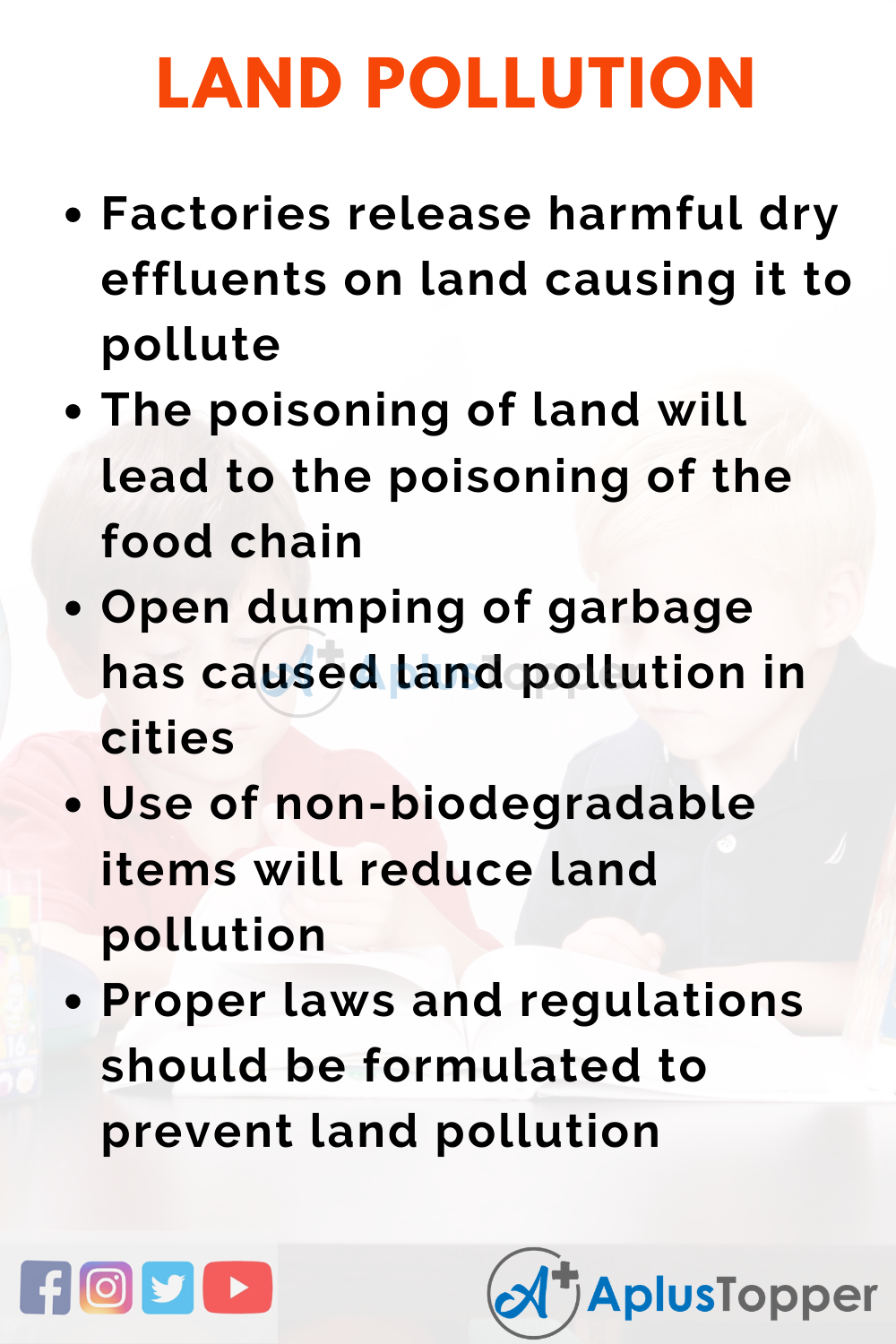 Question 1.
What is land pollution?

Answer:
Contamination of soil resulting in losing its nutrients and life-sustaining capacity is called land pollution

Question 2.
How to prevent land pollution?

Question 3.
What are the main causes of land pollution?

Answer:
Agriculture, waste disposal and deforestation are the main causes of land pollution

Question 4.
What is the effect of land pollution?

Answer:
Land pollution causes poisoning of our food chain leading to health problems for human being and animals