The title derived from a poem of the same name, produced in the 15th century, by Alain Chartier. The poem composed by Keats has a simple structure and follows the ABCB scheme of rhyme.

We are providing students with essay samples on a long essay of 500 words and a short essay of 150 words on the topic “La Belle Dame Sans Merci” for reference.

The ballad La Belle Dame Sans Merci was written in the romantic period. The title of this ballad is in French, which, when translated, means “The Beautiful Lady Without Mercy”. The theme of this ballad is written on the viewpoint of a man, who meets a beautiful lady, who seduces him but then abandons him too. The man falls in love with this beautiful lady, who is supposed to be a mystical creature. The creature is named as ‘femme fatales’. In this poem, Keats has dramatized the difference between what is a dream and what is a reality.

This narrative poem gives very little information about the characters. There is hardly any judgement about them. The poem draws a very hazy picture, where reality can hardly be separated from the dream. The narrator of the poem crosses path with an ailing knight. He looks forlorn, to which the narrator asks for a reason. The poem takes place on a late autumn day.

The knight confesses that he fell in love with a lady, who was the child of a fairy. This mesmerizing lady professed her love for the knight and then abandoned him. The knight also tells the narrator that he has met the beautiful lady in a meadow, and instantly fell captive to her charms.

The ailment of the knight is quite well depicted in the poem. There are instances which make the audience feel that the knight is broken beyond repair. The knight describes that the world was once beautiful to him, but now all worldly affairs have lost meaning to him. All happiness in his life has been taken away from him by this enchanting lady. The knight wants to keep his sorrow a secret. This is so because he feels that he is an honourable figure, and his head should be held high. He is also somewhat angry on the fairy; because of her, he is dying. He could not take the rejection that the lady gave him, and that dejection is becoming the cause of his death.

The knight also describes the beauty of the lady and her bodily features. He describes that the length of her hair was very long. The wildness in her eyes can be an indication that she was a feral creature. There are instances where the poem indicates that the lady is enchanted. She is described as singing a ‘fairy song’. She speaks a strange language, and even her eatables are different.

The knight is so in love with the lady that even when he takes her away, on the horse, she is all he could see. He believes that the best days of his life are those he has spent with this mysterious lady. The poem is full of contrasting themes, and it is more clear in the dying moments of the knight. The poem gives vivid descriptions of the nature surrounding them and compares living things to metaphorical things. It also depicts the cruel side of love when the lady abandons the knight. 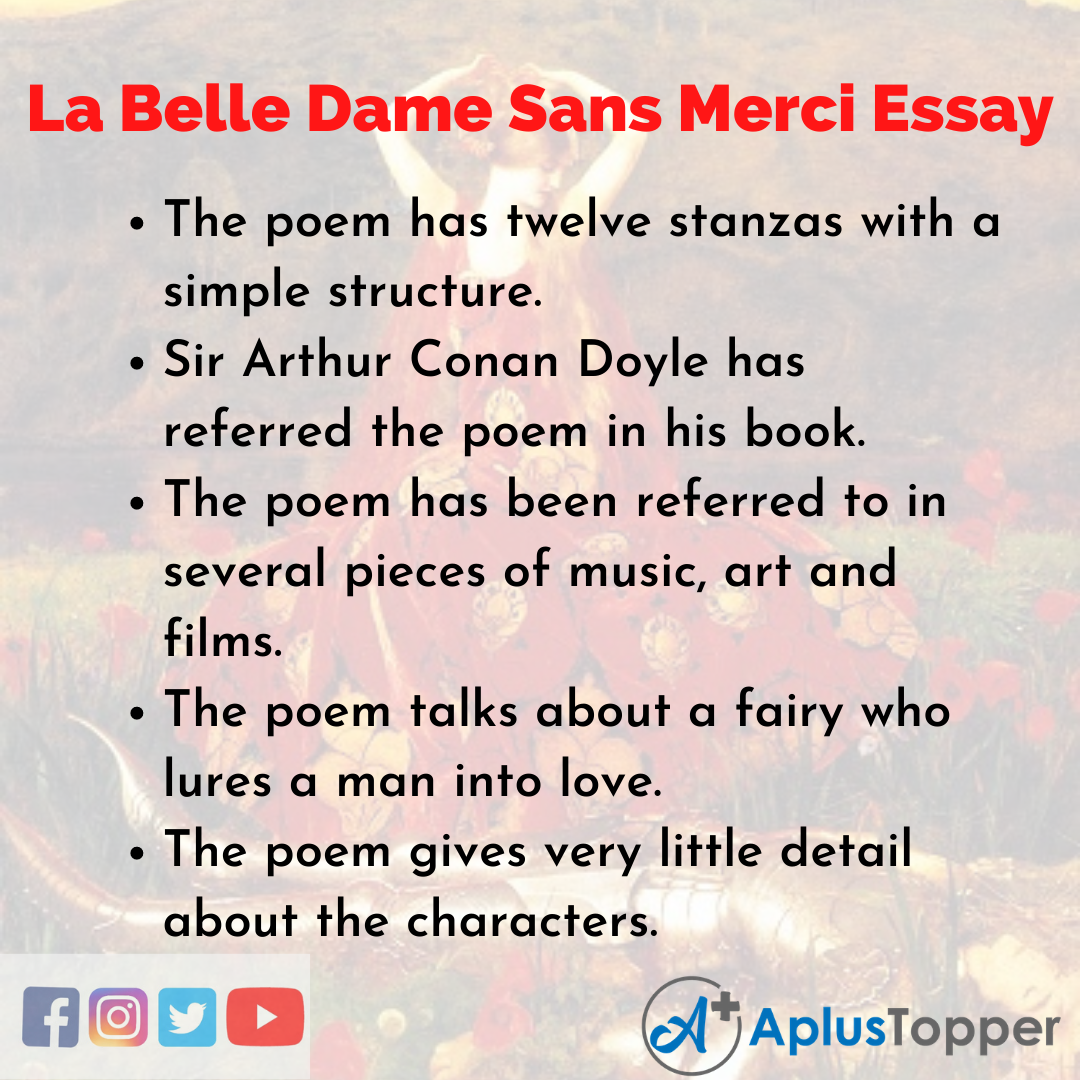 The theme of La Belle Dame Sans Merci is love and its consequent rejection. A mysterious and beautiful lady bewitches the knight in the poem. The knight is somewhat enslaved by her beauty and accepts that he is in love with her. When the knight awakes up the next morning, however, he finds the lady gone.

The knight is dying on the hillside when the poet finds him. Keats has written this romantic piece to establish the fact that dreams and reality lie in two opposite sides of the spectrum. There are numerous acknowledgements toward nature in the poem. The hills depict the knight’s sadness and lifeless state. 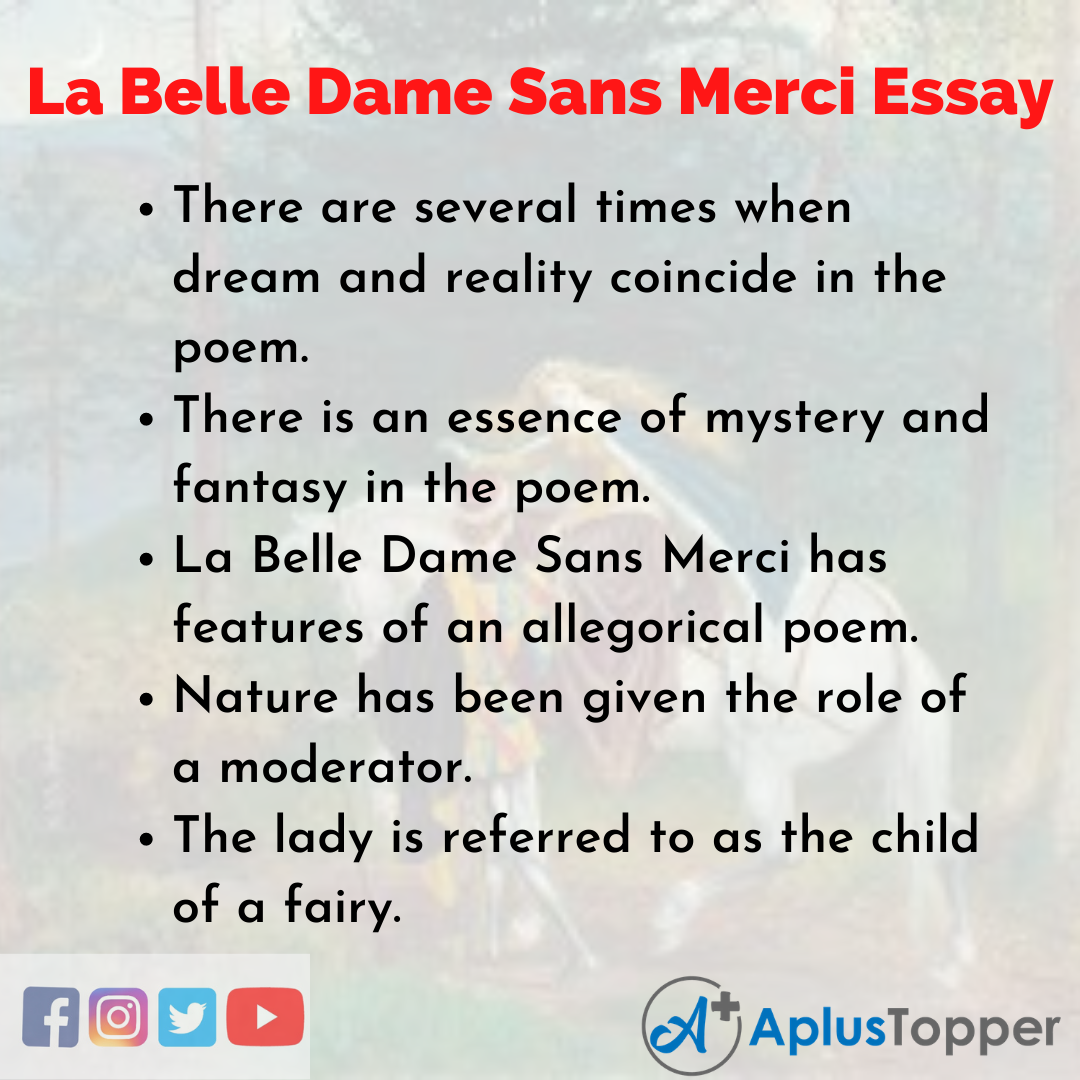 Answer:
It is a French term, which, when converted to English, means ‘The Lady Without Mercy’.

Question 2.
What dream did the knight have?

Answer:
In his dreams, he saw kings, warriors, who were death-pale and warned him about the mysterious lady.

Question 3.
What did the knight gift the lady?

Answer:
The knight gave floral gifts. He made garlands and flower bracelets for her.