Kite Runner Essay: The Kite Runner is the debut fiction of Khaled Hosseini, who is an Afghan-American author. This heart-warming novel came in the year 2003, with the tale of a young boy, named Amir.

The story of Kite Runner is a story of family, friendships, betrayal and also admiration. The background of the novel is the devastating state of historical Afghanistan for 30 years.

We are providing students with samples of essay on an extended piece of 500 words and short writing of 150 words on the topic “Kite Runner” for reference.

The protagonist of the novel, The Kite Runner, is Amir. Amir is much like the novelist Khaled Hosseini himself, as both of them were born in Afghanistan, both left their homeland as a youth, and returned long after.

The novel depicts the incredible friendship that forms between Amir, who is the son of a wealthy Wazir and Hassan, who is the son of Amir’s father’s servant. The novel derives its name from the fact that Hassan is Amir’s kite runner. Both the boys enjoy flying kites, and Hassan has an uncanny ability to understand exactly where a downed kite might land.

The theme of this tale is mostly a search for redemption. Amir’s mother gave away her life while giving birth to him. So the young boy tries to redeem himself in front of his father’s eyes. The entire plot is based on one particular line Amir heard from his father. His father once told him that someone who does not have the capacity to stand up for himself, as a man, he will fail to stand for anything. The theme of redemption is also portrayed through the relationship between Amir and Hassan. Amir fails to do anything when Hassan is sexually assaulted. This is the guilt that drives him to locate Sohrab, Hassan’s son so that Amir can have a chance at redemption. His journey to Kabul, his confrontation with Assef are all instances that show his guilt.

The complicated relationship between fathers and sons is another theme of this novel. The love that exists between a son and his father comes with tensions as well. Amir and his Baba share quite a complex relation. There are various instances when Amir felt the lack of love from his father. Amir’s father, on the other hand, has difficulties in connecting with his son.

The novel also depicts are many political events are intertwined with the private lives of the people. The storyline moves with Amir, but it also follows the transitions that Afghanistan goes through as a country. Amir’s childhood shows a memory of calm Kabul during the reign of the monarchy. The Soviet invasion is also visible in the later years and how it uproots the lives of the people is a central tenet of the novel. The republic that has been established now gives an excuse to harass people. The main reason for Amir to flee to California with his Baba is because of such destructive forces.

Another concept that is portrayed beautifully is male friendship. Male friendships are complicated, and Amir and Hassan’s friendship grows to be more involved when Amir learns that Hassan is his half-brother in reality. Amir’s superior societal status forms another barrier to his friendship with Hassan. There is a sense of jealousy on Amir’s part, while Hassan is symbolic of utmost loyalty. This novel is one-of-a-kind and a classic. It takes its audience through a rollercoaster ride of emotions and has numerous heart-wrenching points. Some instances depict morality. The Kite Runner can move the audience and creates a mixture of feelings among the readers. 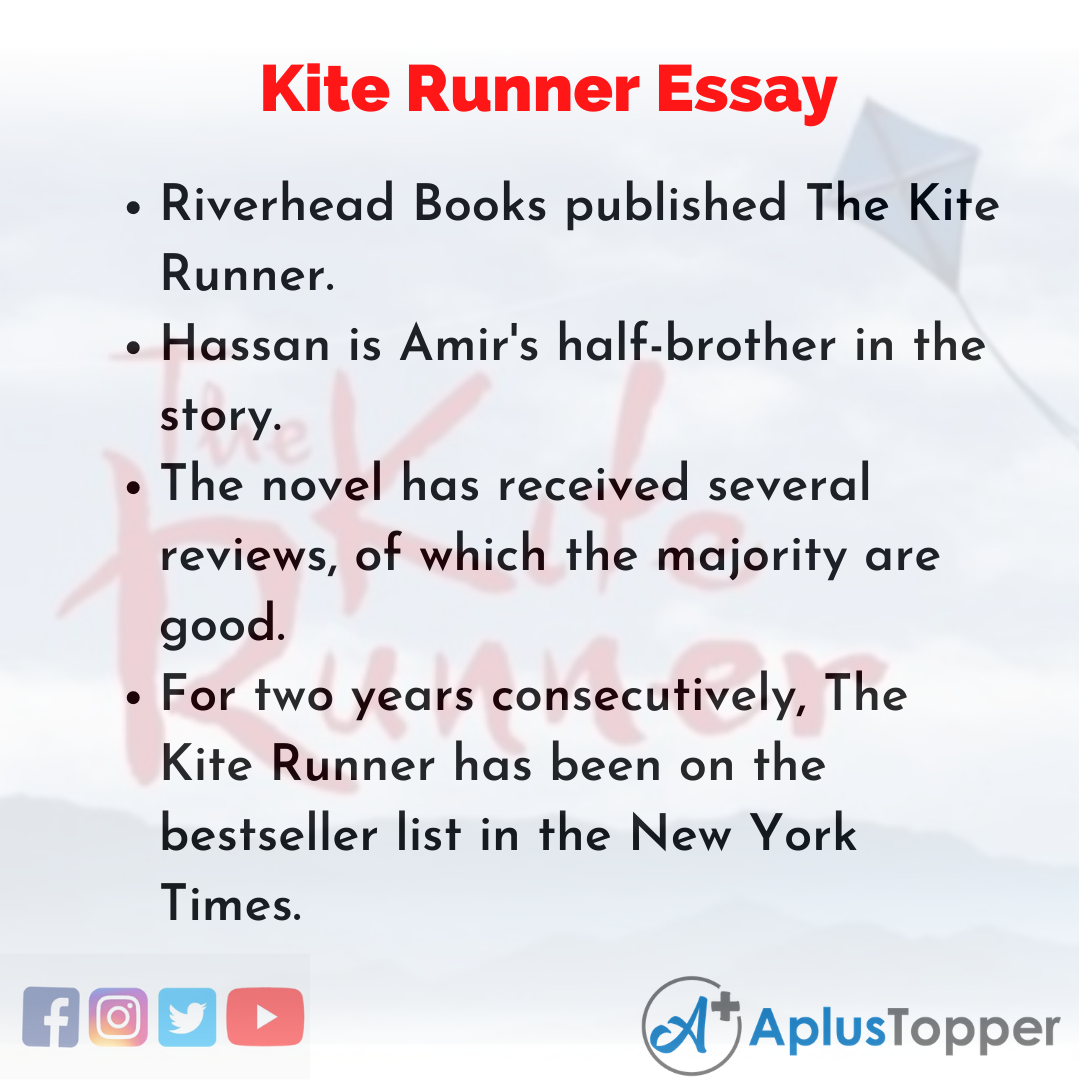 The Kite Runner is the primary novel written by Khaled Hosseini. This novel tells the story from the view of Amir, a young Pashtun boy. His father is a wealthy Wazir, and his companion is his Baba’s servant’s son, Hassan. Both the boys have a knack for flying kites, but Hassan also has an exceptional ability to understand the point where a kite might fall. So Hassan is Amir’s ‘kite runner’, and therefore the name of the novel.

The novel traces the progress through the disturbing historical events in Afghanistan. There is a warmth in the depiction of Afghanistan’s culture. The traces of violence, guilt and consequent redemption can be found throughout the novel. The assault of Hassan on the hands of Assef, consequently Amir failing to do anything against it, which leads to his search of redemption, is the crux of the story. This heart-warming tale in a beautifully crafted novel also shows the pivotal role that a father has on the life of his son.

10 Lines on Kite Runner in English 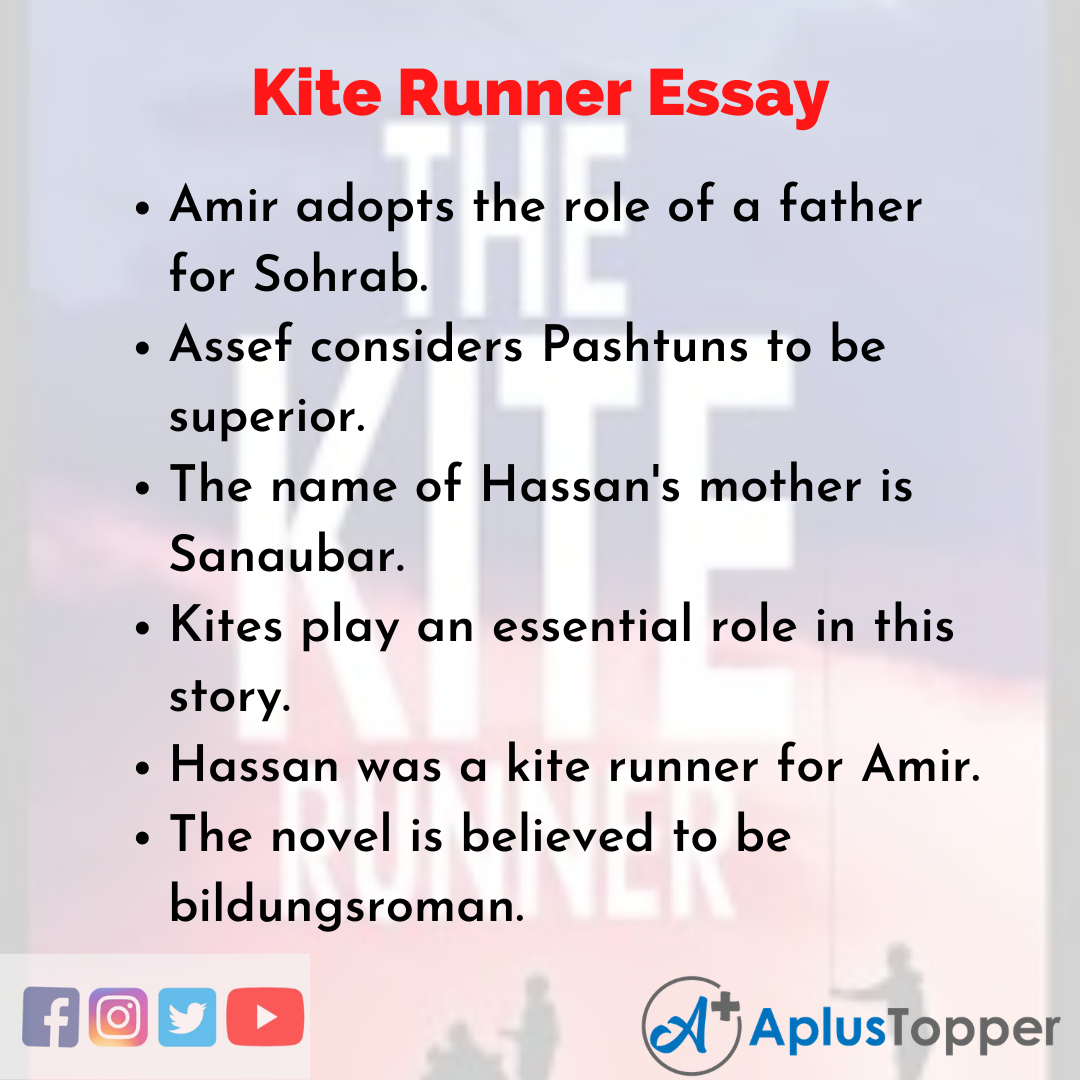 Question 1.
Is The Kite Runner a Young Adult fiction?

Answer:
In many ways, it can be considered as a YA fiction, but there is quite some number of disturbing events, like brutal beatings, that does not certify for it to be in young adult genre.

Question 2.
Who is the main character in the novel?

Answer:
The protagonist of the story is Amir as the story is told from his viewpoint. But Hassan is the one who is a kite runner.

Question 3.
What are some other good books by Khaled Hosseini?

Answer:
Hosseini has written some praiseworthy books, of which A Thousand Splendid Suns and The Mountains Echoed are very well known.