Kitchen Utensils Vocabulary: People who are cooking for the first time or going to buy the items must know the English names of kitchen utensils. There are many items or tools that are used to cook tasty and healthy food. Learn Kitchen Utensils Vocabulary with pictures here. A list of Essential Kitchen tools in English will help you to buy the products without any hesitation. Some of the utensils that are used in the kitchen are Apron, Cooker, Mixer, Spoon, Cup, Chopping Board, Knife, pressure cooker, and so on. 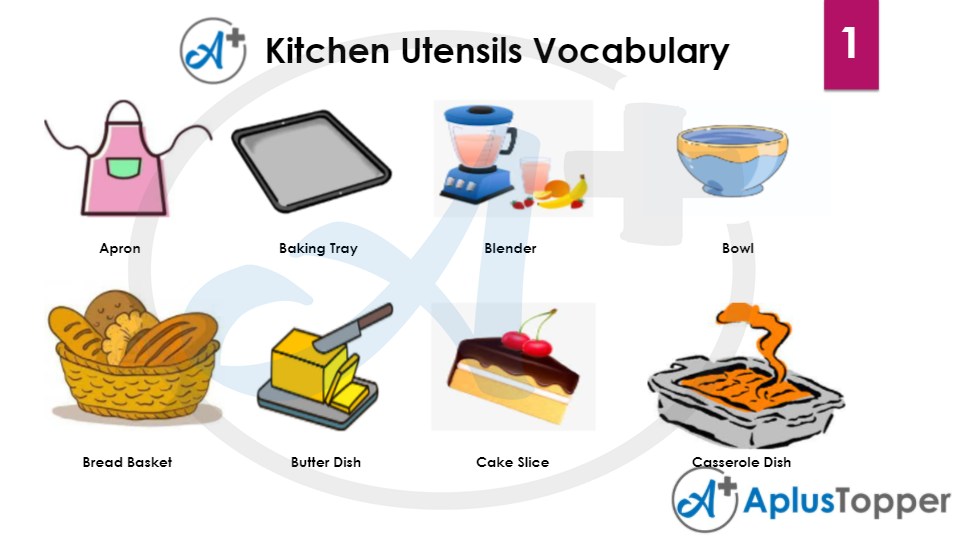 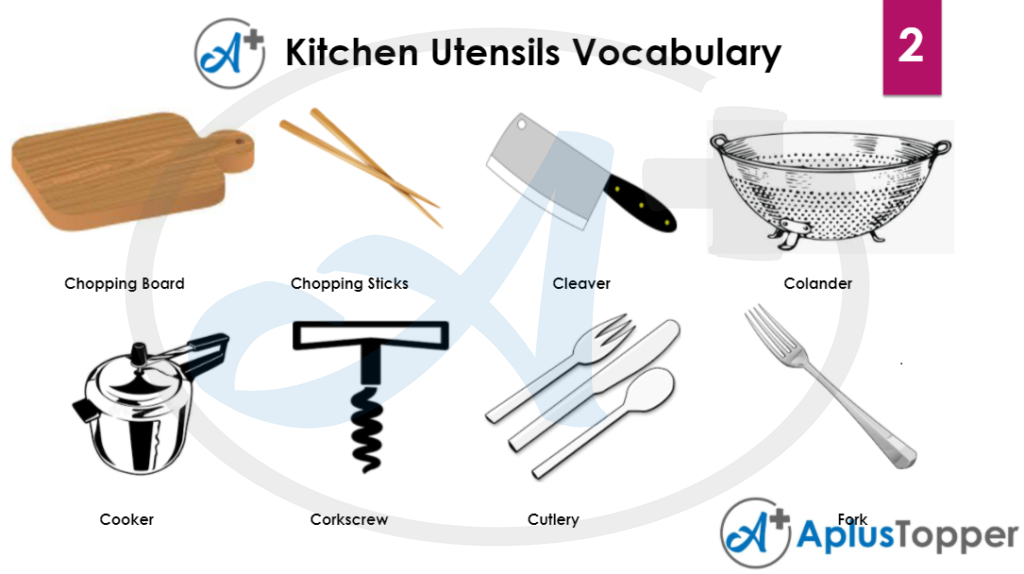 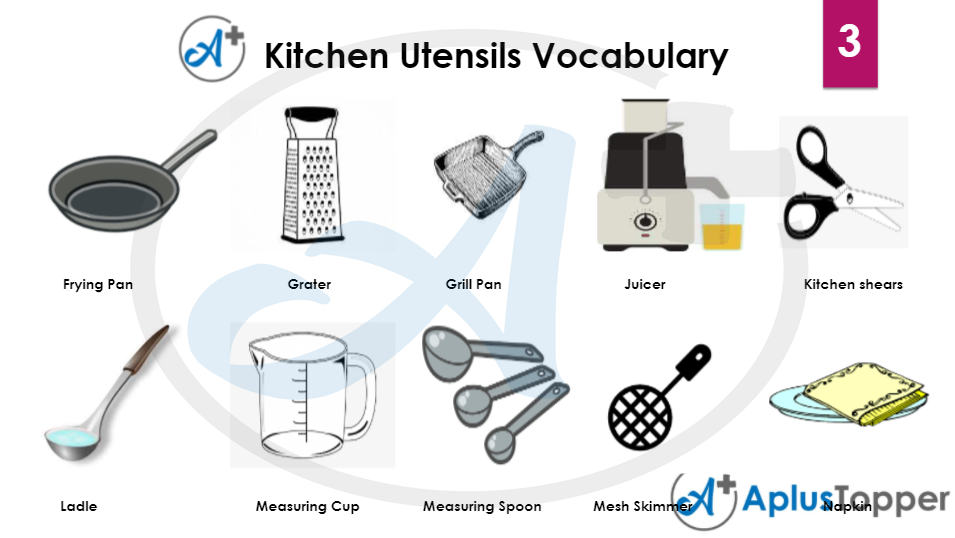 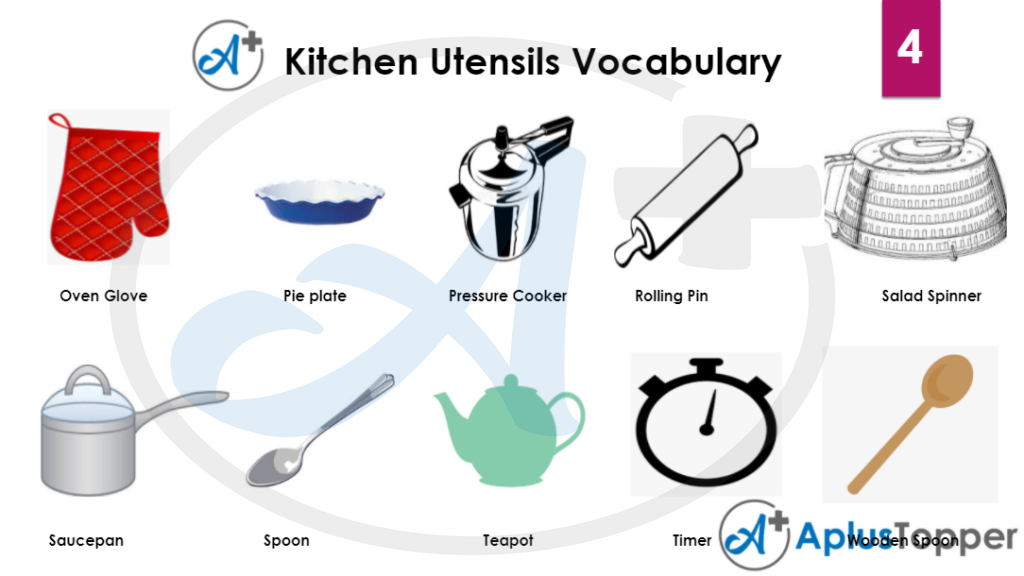 An apron is the traditional clothing that is used while cooking and washing clothes. Aprons are used in restaurants for many purposes, but its main purpose is to protect you from getting spills and stains on your clothes.

Foods are placed in the baking pan and then put in the oven. Baking pans are used to hold runny batters, such as cake batter and thick solid masses of food, such as savory hotdish recipes.

A blender is a kitchen tool that is used basically to emulsify, liquefy or puree. 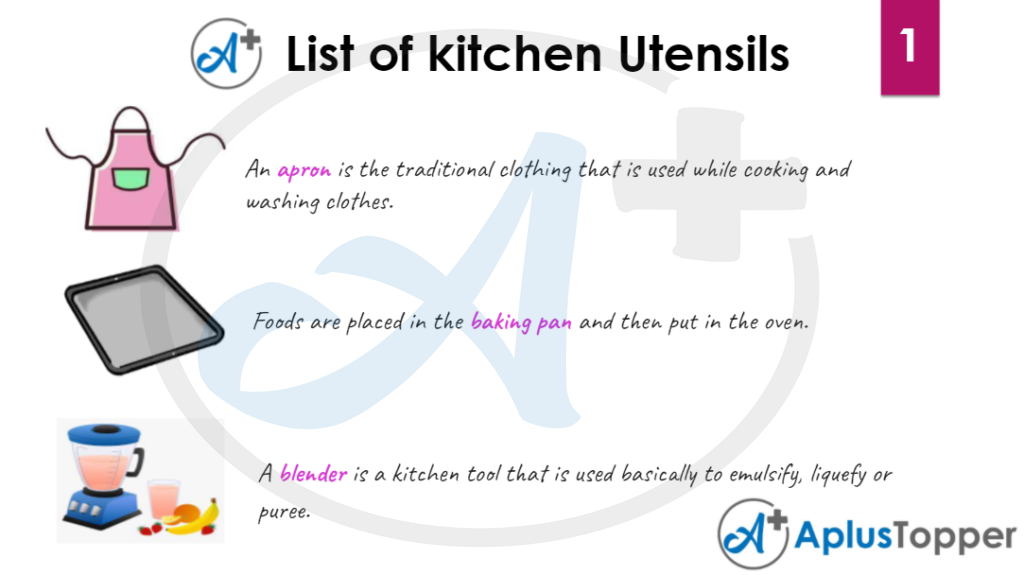 Bowls are used for combining food ingredients when preparing recipes.

A bread basket is a container to put bread or rolls.

The butter dish is a small platter that covers, used on the dining table to hold scrolls of butter. It is used to keep the butter.

A cake slice is a tool that has a flat blade with one end narrower than the other end. It is used for cutting and lifting pieces of cake. A casserole dish is a large, deep bowl that is used for cooking different types of food. It is used for baking food.

A chopping board is a hardware kitchen utensil used to cut fruits and vegetables. It is also called a cutting board.

Chopstick is a pair of slender sticks held between the thumb and fingers to eat Chinese and Japanese food. It is used to lift food to the mouth.

Cleaver is a hardware kitchen utensil with a heavy, broad blade used for chopping meat. It is used to chop, shred, crush ingredients and materials. 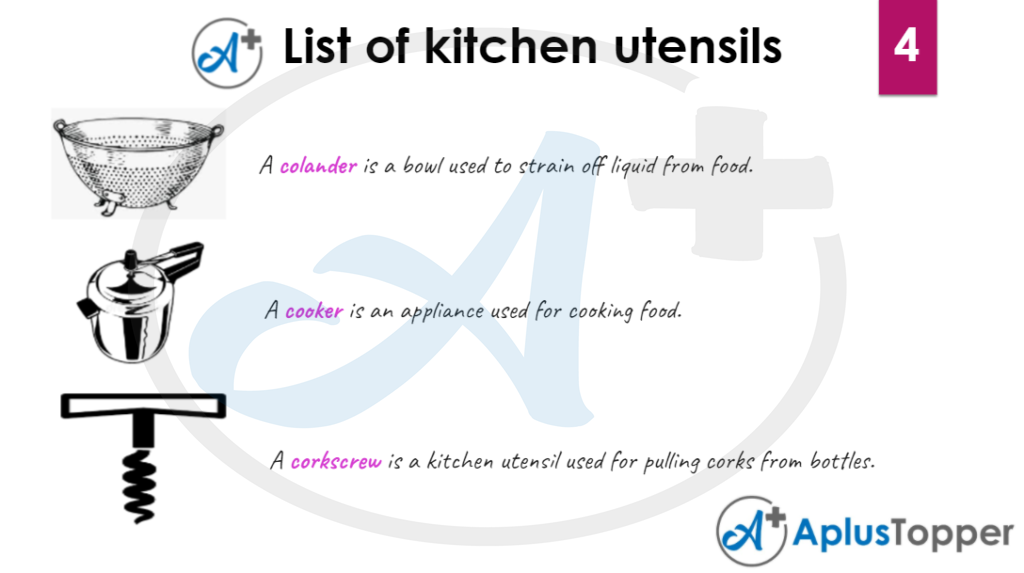 A colander is a bowl used to strain off liquid from food. It is used to wash fruits, vegetables, etc.

A cooker is an appliance used for cooking food. It is used to bowl vegetables than for eating raw.

A corkscrew is a kitchen utensil used for pulling corks from bottles. Cutlery is a hand implement used for preparing, serving, and eating food.

A type of fork that is used for many different cooking tasks when working with a variety of different foods that are boiled, baked, cooked, stir-fried, or grilled. It is used to eat bulky food like noodles, pasta, etc.

A frying pan is used for cooking food. 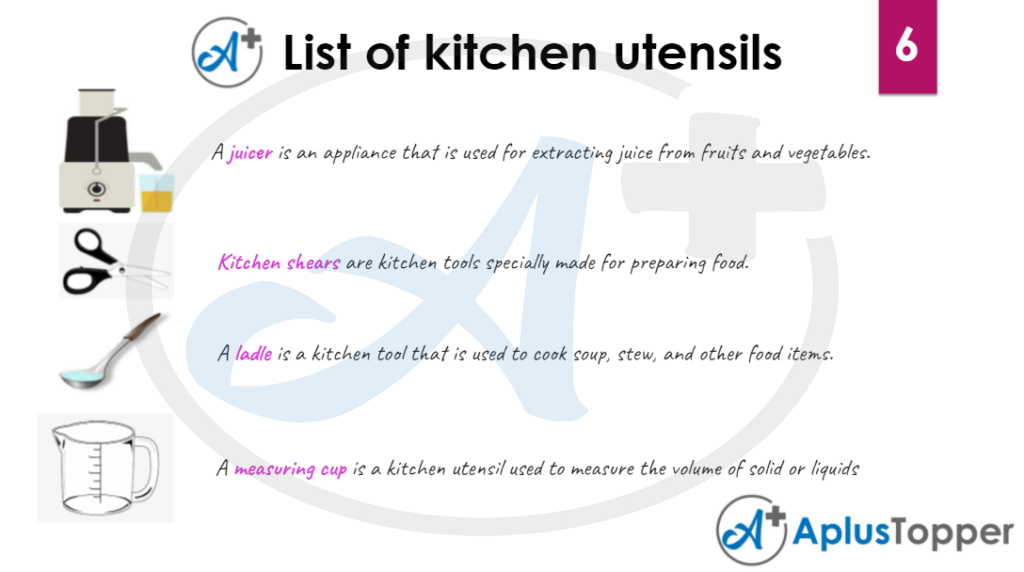 A juicer is an appliance that is used for extracting juice from fruits and vegetables.

Kitchen shears are kitchen tools specially made for preparing food. They are used for food packing, snipping herbs.

A knife is a tool or weapon that is used to cut vegetables, fruits, etc.

A ladle is a kitchen tool that is used to cook soup, stew, and other food items. It has a long handle stopping with a deep bowl at an angle. It can also be used to measure oil.

A measuring cup is a kitchen utensil used to measure the volume of solid or liquids for cooking food such as milk, water, rice, flour, pulses, and so on. A measuring spoon is used to measure specific capacity while cooking such as salt, chili powder, sugar, etc.

A Mesh Skimmer is used for skimming fat or fine particles from stews, soups. It is also used to remove the foam that is formed on the surface of soups or jams.

The napkin is a piece of cloth used to wipe the utensils.

An oven glove is a padded glove for handling dishes from a hot oven. They are used to handle hot items. It is perfect for people working in the food industry.

A pie platter is a shallow metal with sloping sides in which pies are baked. Pie plates are used to bake the single crust and double-crust pies. 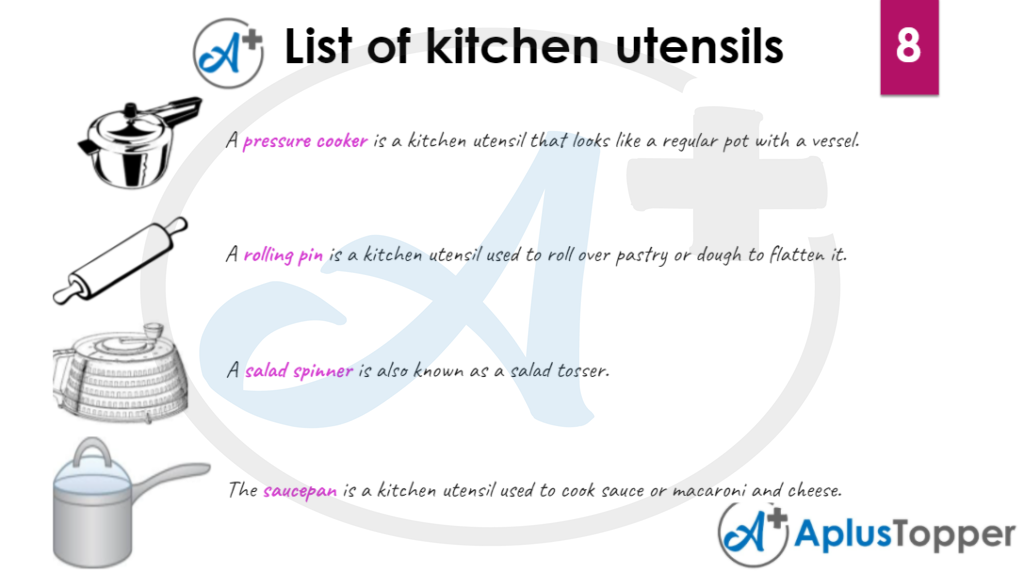 A pressure cooker is a kitchen utensil that looks like a regular pot with a vessel. Pressure cooking is the process of cooking food under high-pressure steam, employing water.

A rolling pin is a kitchen utensil used to roll over pastry or dough to flatten it. It is used to make roti, cookies, etc.

A salad spinner is also known as a salad tosser. It is a kitchen tool used to wash and remove excess water from salads items.

The saucepan is a kitchen utensil used to cook sauce or macaroni and cheese. A saucepan is a deep stovetop pan with a long handle and, usually, a lid. 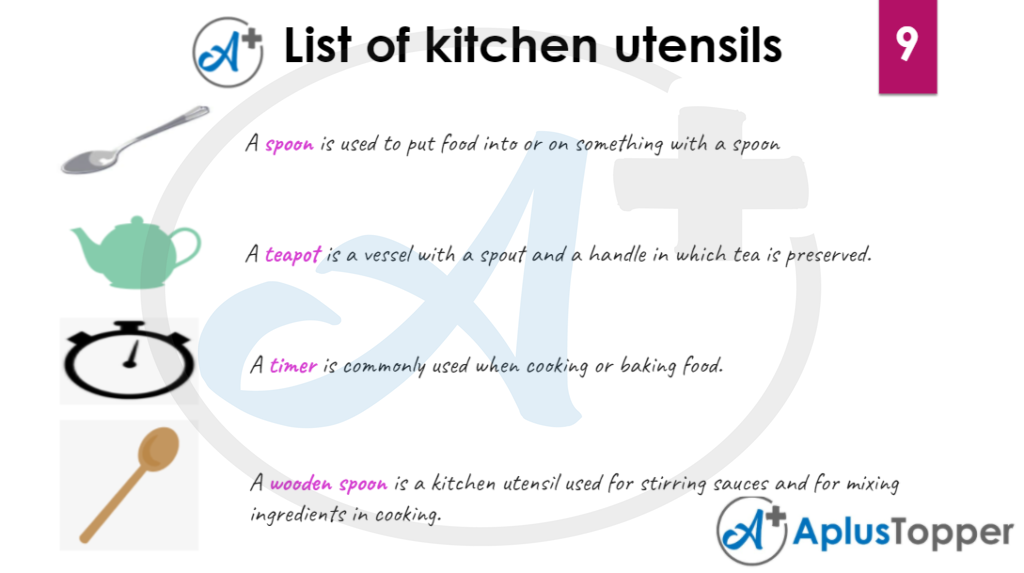 A spatula is a kitchen tool used for mixing ingredients in cooking. A spatula is a broad, flat, flexible blade used to mix, spread and lift material including foods, drugs, plaster, and paints.

A spoon is used to put food into or on something with a spoon. It is a kitchen utensil consisting of a small, shallow or round bowl on a long handle used for stirring, eating, or serving food.

A steak hammer is a kitchen utensil for pounding meat to make it more tender by breaking down the tissue fibers.

The strainer is a device having holes punched in it. It is used for separating solid matter from a liquid.

A teapot is a vessel with a spout and a handle in which tea is preserved. A teapot is used for steeping tea leaves or a herbal in boiling water.

A kitchen timer is a device that can be set for a number of minutes that sounds an alarm when the specified amount of time has elapsed. It is commonly used when cooking or baking food.

A whisk is a kitchen utensil that can be used to blend ingredients smooth or to incorporate air into a mixture, in a process known as whisking or whipping.

A wooden spoon is a kitchen utensil used for stirring sauces and for mixing ingredients in cooking. It is made of wood and has a long handle.