Julius Caesar Essay: Julius Caesar was Roman General and statesman who is widely known for his notable role in the events which led to the fall of the Roman Empire. He was a celebrated politician and can also be termed as a successful one. His most outstanding achievement was the invasion of Britain. However, Caesar’s acts were almost always against the decisions of the Senate, and despite his crucial successes, he was soon requested to step down.

Caesar, driven with political and military authority, disregarded the Senate every time. The elites soon were discontented towards his social reforms. Caesar was finally assassinated by a group of senators. The most crucial literary representation of Caesar was in the play called “Julius Caesar” by William Shakespeare.

We are providing students with essay samples on an extended essay of 500 words and a short piece of 150 words on the topic Julius Caesar.

Julius Caesar was a notable Roman statesman who eventually became one of the most crucial politicians of the Roman Empire before it’s decline. He, along with Crassus and Pompey, formed a political alliance called The First Triumvirate which dominated the empire for years.

However, Caesar’s glorious wins in battles and his invasion of Britain soon became a threat to Pompey. Caesar was asked by the Senate to step down, but he didn’t comply with the decision. This led to high opposition from the Senate and eventually resulted in a conspiracy against Caesar and his assassination.

The notable play, “The tragedy of Julius Caesar” written by William Shakespeare is a canon of English literature. The play was performed for the first time in the year 1599.

The play is centred around the Roman statesman Julius Caesar and his eventual assassination. Though the play is named Julius Caesar, it mostly centres around Brutus. It depicts the moral dilemma of Brutus, one of the closest friends of Caesar and a Roman Senator who gets involved in the conspiracy to murder Caesar.

The play begins with the return of Caesar from a victorious conquest by defeating Pompey and the beginning of a conspiracy against him among the senators. The Roman senators led by Cassius are seen to forge several documents and convince Brutus that Julius needs to assassinated to save Rome and its people.

Later, the senators approach Caesar with a fake petition regarding an issue involving Metellus Cimber’s banished brother. As Caesar rejects the plea, he is stabbed by the others, the last stab being of Brutus.

The death of Caesar gives rise to a series of civil wars in the Roman Empire. Brutus tries to pacify the crowd with his oration, but Mark Antony soon turns the public against the assassins. Brutus and Cassius unite to battle against Mark Antony and Octavian Caesar. However, they both meet with the unfortunate and untimely death. The play ends with Antony paying his tribute to Brutus as he was the only noble soul in Rome who stabbed Caesar only because he was made to believe that it was for the greater good of the empire.

Critics of Shakespeare’s play, Julius Caesar have often found themselves in never-ending dilemma regarding who is the protagonist of the story. Some believe that neither Caesar nor Brutus are the protagonists of the play since Caesar dies right at the beginning in Act Three, Scene One. Others believe Caesar to be the axial character of the play, around whom the entire story runs. There also critics who like to think that it is indeed Brutus who is the protagonist as the whole play centres around his moral dilemma and ends with his noble death.

The larger message of Julius Caesar-

The characters of Caesar and Brutus are quite identical in the play. Both of them are driven by passion and intuition. They have high philosophical knowledge that makes them respectable. However, Caesar is a man driven by virtue, while Brutus is driven mostly by impulsive passion. Julius Caesar was a notable Roman statesman and politician who had risen in power during 60 BC. He became a crucial political as well as military leader and achieved a great deal for the Roman Empire.

He was responsible for the glorious invasion of Britain and also the defeat of the authoritarian Pompey. However, Caesar soon met striking oppositions from the Roman Senate. When he didn’t agree to comply with the Senate’s decision of removing him from an authority, he was assassinated by his senate members led by Cassius and also his closest ally Brutus.

William Shakespeare’s play, Julius Caesar centres around this moral dilemma of Brutus whether he should join hands with the Senate to murder his friend. The play continues with the rising civil wars after Caesar’s death, Cassius and Brutus’s battle against Antonio and their eventual death. The play gives us a larger message of how passion and arrogance can often lead a man to the wrong path.

1. The play was first performed in 1599.
2. It was first published as a work in 1623.
3. The most famous line of the play is the Latin phrase. “Et tu Brute?”
4. Brutus was assassinated in 44 BC.
5. Shakespeare altered several historical facts in the play.
6. For dramatic effect, he made Capitol the venue of Caesar’s death rather than Curia of Pompey.
7. There is a debate on who the actual protagonist of the play is.
8. In the end, Cassius asks his servant to kill him.
9. Brutus commits suicide.
10. Julius Caesar’s death was a notable event that led to the fall of the Roman empire. 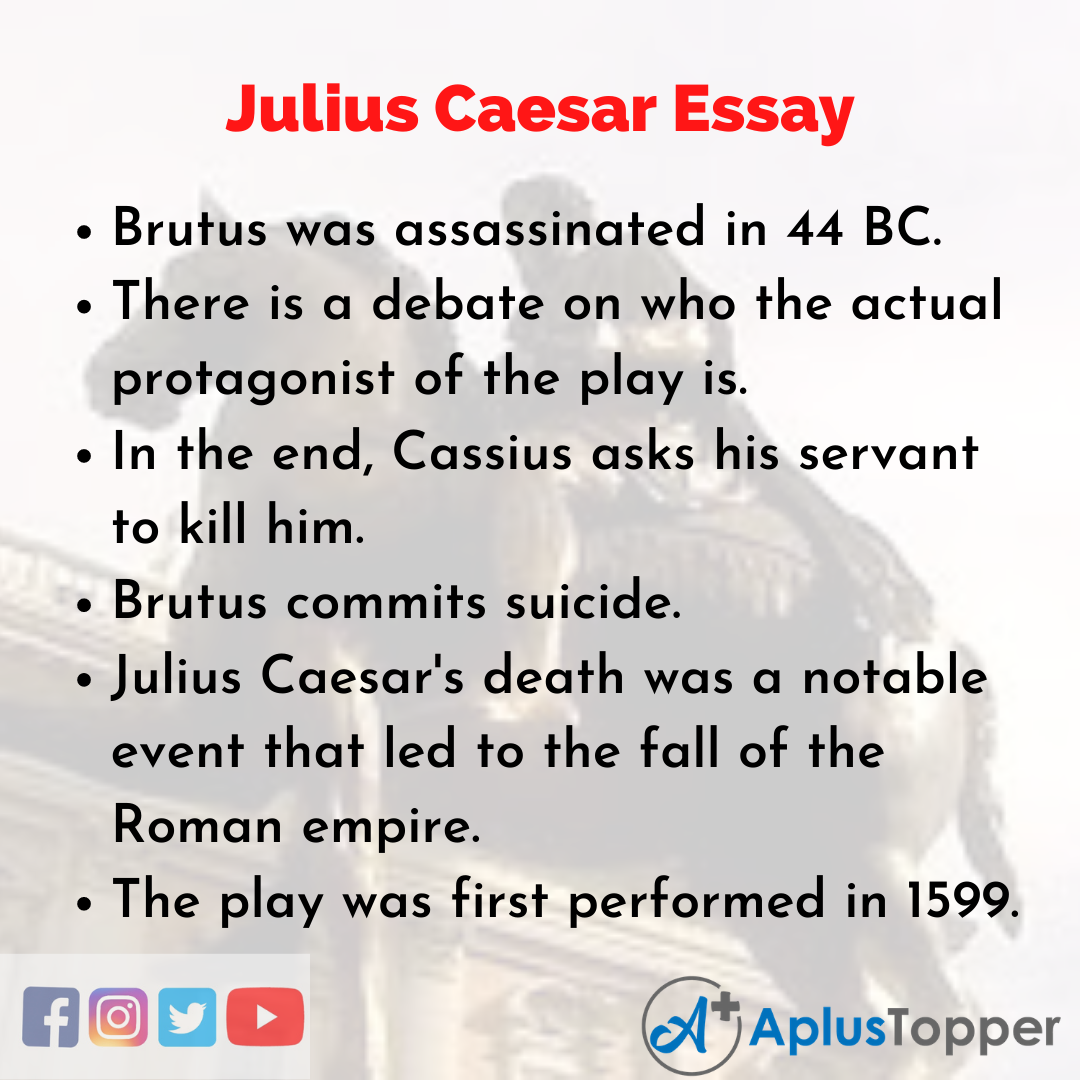 Question 1.
Was Brutus an evil character?

Answer:
No, Brutus was a man of virtue who was driven by his passion for the wrong path.

Answer:
Julius was succeeded by his adoptive son Augustus Caesar.

Answer:
This Latin phrase means, “You too Brutus?”

Question 4.
Who was Pompey?

Answer:
Pompey was a Roman politician who was first an ally of Caesar and his enemy.