Issues and Problems Faced by Women in India Essay: The situation of women in India is the best example of the hypocritic phenomenon. The women on one side are celebrated as mothers and on one side are harassed in the form of an object. Women are the best creation of god but here the reality is something different. Here is a brief idea upon the same in the form of a long essay and a short essay with ten pointers upon how to frame the essay.

Issues and Problems Faced by Women in India essay will be helpful for students in classes 7, 8, 9, and 10.

The roots of the culture of any country are from the values inculcated into the people by different women in their lives. Women have the most celebrated presence in every aspect of our lives in the form of a daughter, a mother, a sister, or any such relation. Women were given the power to create life and as we know very well, it is not an easy feat.

However, Women in India face a completely conflicting situation. On one hand, women are worshipped as goddesses, and on the other hand, they are shamed in multiple ways which a sensible person can not even fathom.

Being a woman in India is not easy. They have to fight for their basic human rights which they do not receive due to the orthodox mentality that has taken roots in the minds of the Indians. It is often said that the physical strength of men is great but the emotional strength that comes with the endurance in women, is a force to be reckoned with.

The women in India fall in the same category. Where they have the strength to fight back, they keep on facing problems throughout different phases of their lives. Education is a power that should be available to all, but this is not the case in India. People believe that educating women is more than they deserve as they would be not eligible for marriage if they are more capable than men.

If the woman does get educated and is completely capable, gender inequality results in the struggle at her workplace where either she is not considered as eligible as males or is harassed by seniors with unfulfillable demands.

Cases like acid throwing are a regular phenomenon as aggression towards spoiling someone’s life sounds more feasible rather than thinking the matter over maturely. Where a father gives his whole life away in a marriage in the form of his daughter, the people look forward to comparing what he gave as dowry in the marriage.

And if the father does not give enough due to any reason, the daughter is tortured with domestic violence. We have come this far, but there were incidents in the old era that daughters used to be sacrificed in pots of milk as soon as they were born. What kind of psychology teaches people to hate women and commit such blood-boiling sins?

Women suffer the wrath of many situations in life and this is the reason they are viewed as the epitome of sacrifices. They make sacrifices so the people around them can live and love peacefully. The global gender gap Index 2020 showed that India slipped to 112th spot from its previous 108th spot.

But we don’t need an index to realize that there is a heavy fog in the minds of India where they continue to abuse women indifferently. The women in India are strong in every situation but we forget that it is high time that we understand the role of women in our lives. 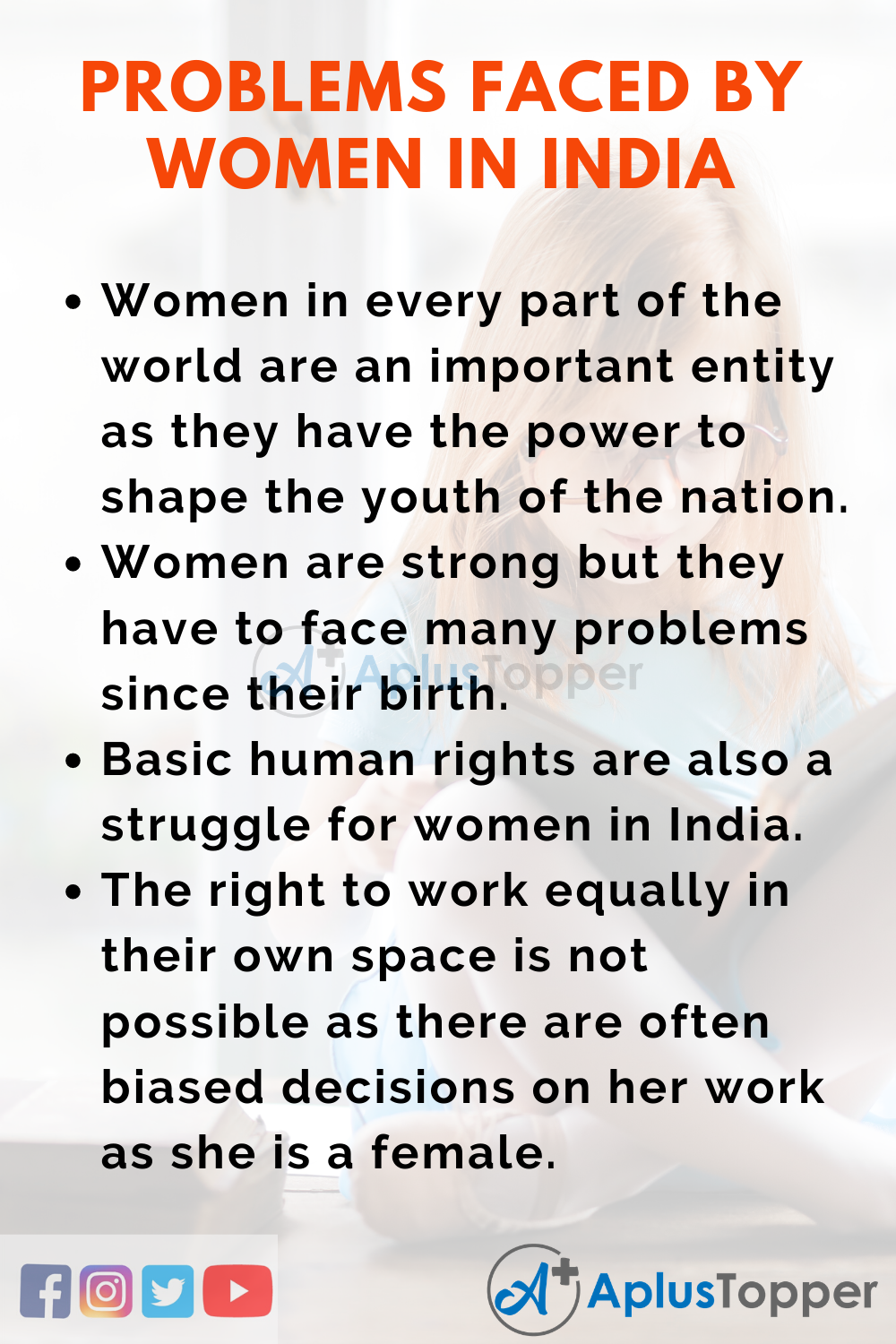 Women are that shaping tool of the culture of any youth that decides the future of any nation. So are the women in India. They are the strongest personalities to have around in the form of mothers, sisters, wives, or even as friends. But this simple fact is not recognized by the people of India.

India is a diverse country in every aspect and in the same way, there are many ways in which a woman has to endure hardships throughout her life. In some places, this starts with her birth itself. Families take away her right to study so she is a perfect example of being a wife who slaves around the whole day.

They strike her respect as a woman when she attempts to work at someplace by disrespecting her because she is a female. Females are frequent victims of crimes like acid throwing or rapes. What did women do to gain such an inhumane response? Thus, it is proved that being a woman is a blessing but that is not the case in India. Indians have yet to recognize the importance of a woman’s presence in their lives. 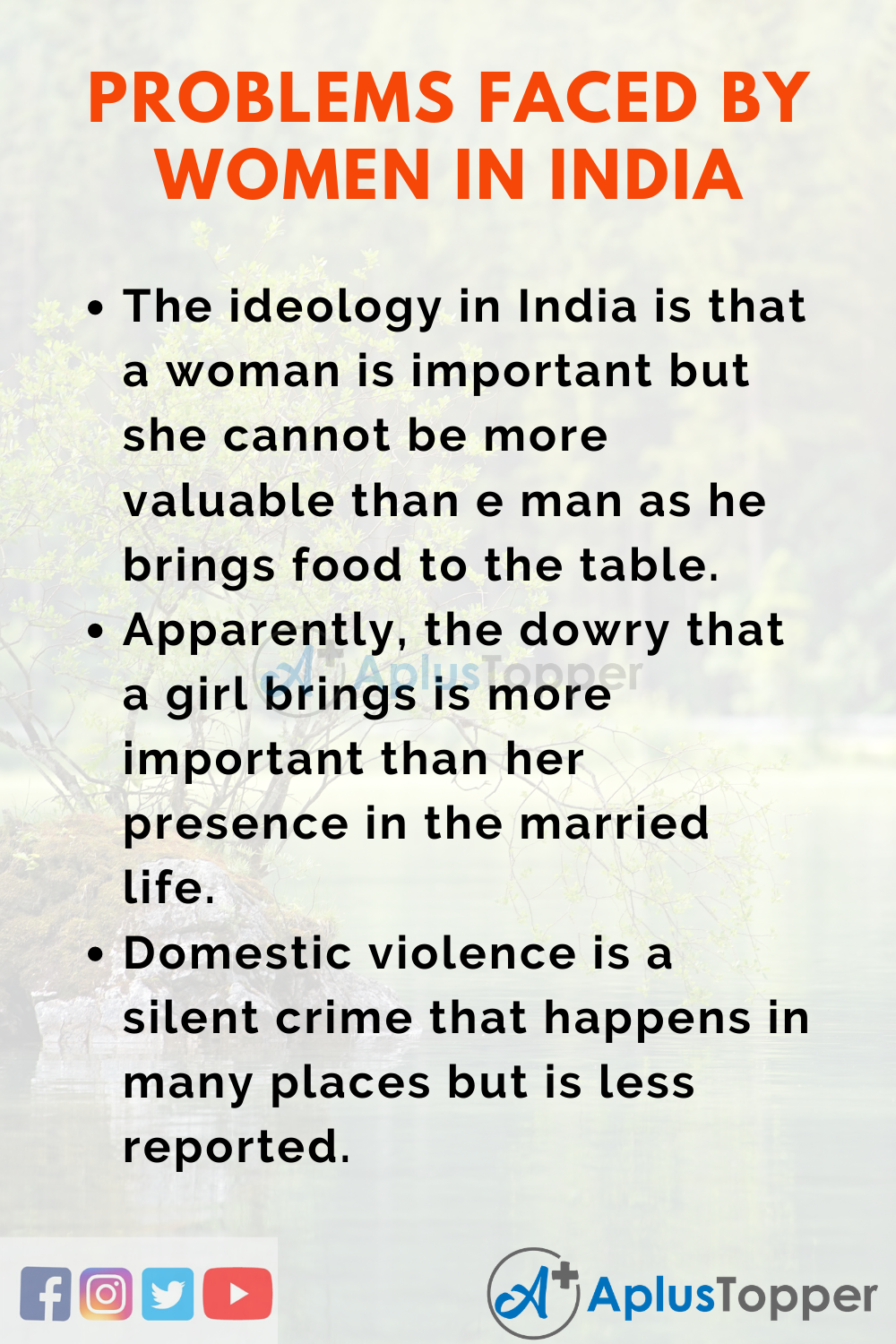 Question 1.
Why are women underestimated in India?

Answer:
Women are thought to be lesser than man as he is the one bringing food to the table. There can be many other reasons as well but the orthodox mentality of people contributes the most.

Question 2.
What are the biggest problems faced by a woman in India?

Answer:
Women in India are deprived of basic human rights such as education and knowledge which puts them in a weak place. Other problems like dowry, workplace bias, land and property, and crimes follow closely behind.

Question 3.
What are the common forms of violence in India?

Answer:
The common forms of violence in India are domestic abuse, sexual assault, and murder.

Question 4.
What is dowry death?

Answer:
The assault or murder of a woman over a dispute of dowry is called as dowry death.