Islamophobia Essay: Islamophobia, the word is a neology and thus consists of two words’ Islam’ and ‘phobia,’ a Greek suffix word usually used to indicate fear or aversion.

The word means an intense dislike or fear of Islam especially triggered as a political force or rather hostility or prejudice towards Muslims.

We provide the students with essay samples on a long Islamophobia essay of 500 words and a short essay of 150 words on the same topic for reference.

The 9/11 attack emerged to be publicly appealing because of the terrorist attack and how it was broadly broadcasted on the news. Ever since that day, Americans changed their ideologies and counted on Muslims as their number one enemy. They also linked every terrorist to be a Muslim, and because of their beliefs are called “Islamophobic.”

On September 11, 2001, two airplanes were flown into the World Trade Centre towers in New York City. An airplane was hijacked by four terrorists who planned suicide attacks against targets in the United States. The subsequent other two flew at the Pentagon and Pennsylvania and caused many casualties and destruction of buildings. The USA made it propaganda to defeat terrorism.

Islamophobia also indicates Americans resort to religious differences in times of political crisis. It is broadcasted and propagated on a wider basis. It is instilled in the minds of youth at a very tender age. It is also politically influenced.

The greater impact is on the Americans and the European Muslims, who are generally known to be peaceful human beings. Following the Paris attacks, Islamophobia has increased in the count, and many young Muslims have experienced bullying and discrimination. Though there have been debates on how to end Islamophobia, truly, the real strength lies within us. We have the power to spread love and change ignorant hearts and minds.

In the 21st century, social media greatly influenced people’s lives to change the thought of hundreds of people in a few minutes. It’s all about promoting them in general, just as they can offer support and help to prove that terrorism is not an act of Islam but barbarism. Politics and western democracy have learned that hatred towards Muslims can get them elected. We must build relationships with the local Muslim community, interrupt Islamophobia, and strongly advocate against anti-Islamic and xenophobic state and federal policies.

Islam, particularly on the Western lands, is often considered to be problematic and syncretism expression of the process of hatred and its execution. It is also regarded as an infamous reputation amongst the leaders of the World for their imperialistic approach to the World issue through the heavy use of brute military power to enforce Western ideals of democracy.

It is showcased where there is a report of a shooter identified as a Muslim, whereas a non-muslim shooter would be identified as mentally ill. A Muslim is like any other citizen, pays taxes, and works with diligence through their community’s malpractices. It is identified as any other religion bigotry and runs in parallel with antisemitism in the 1930s.

Islamophobia also serves as a threat to the religious practices and cultures, skepticism of integration, threats to secularism, fears of sexual crimes, and an unattracted racist current. It has gradually become an important sector in the sociological and political background of Western democracy. It has resulted in numerous attacks on mosques killing innocent Muslims and racial laws demeaning their fundamental rights.

Islamophobia is also identified as discrimination between higher class identification and lower national identification. Anti-discrimination laws have been adopted to fully protect the minorities from the hostile environment towards their religious group. 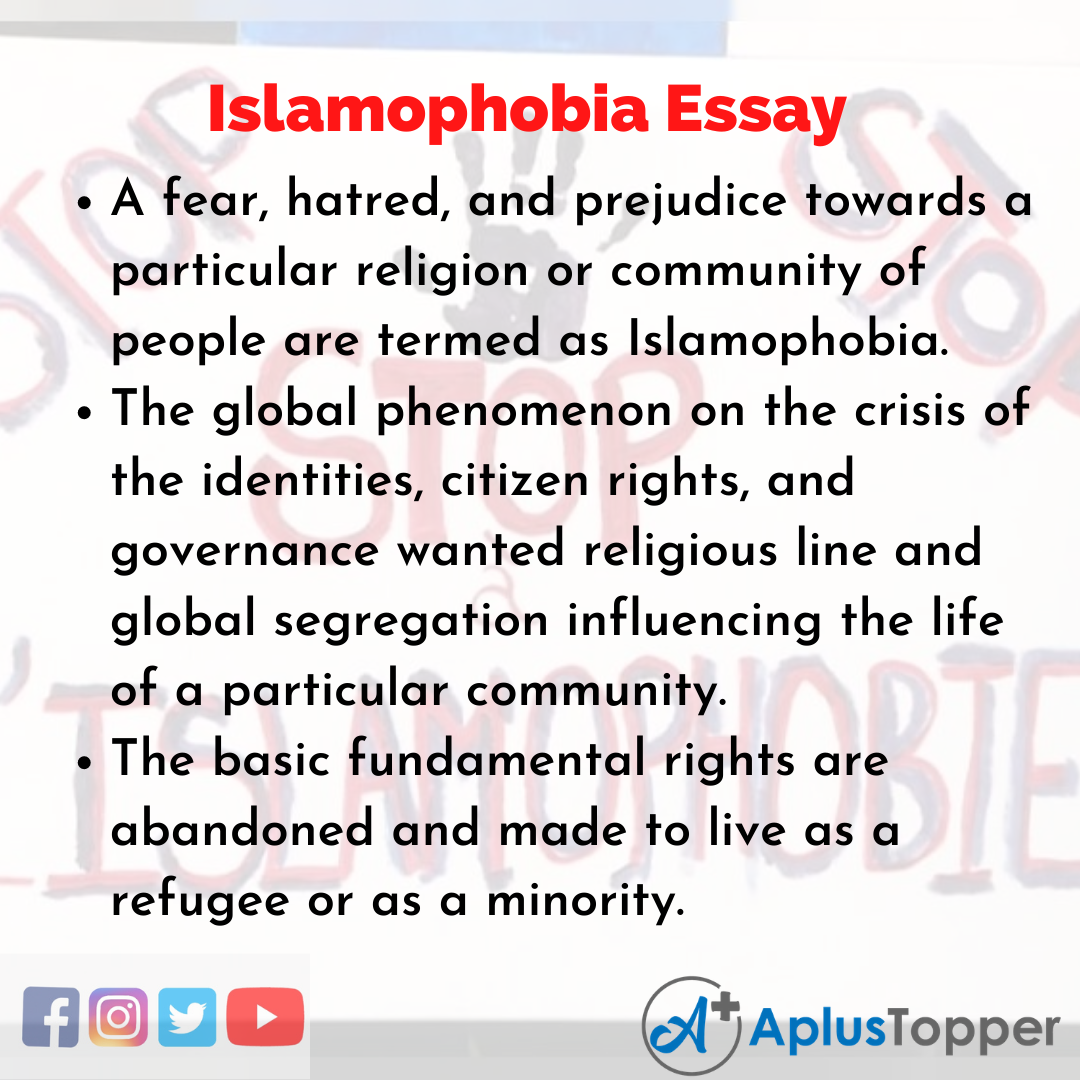 Every coin has two faces; similarly, every community has two sectors of people, the ratio being quite the same. A handful of radical people spreading hate, but people label it on every Muslim. Islamophobia has been greatly influenced by the Western part of the World perpetuated by a poorly managed media and supported by agenda-driven think- tanks and to act on it.

Muslims have been segregated for the ills of society and have been unjustly cast away, banishing them from their mere existence. However, they don’t ever get a mention.

The basic fundamental right of the people should be prioritized above all. The women being affected at a higher rate because of the cloth they wear. Political leaders have been instrumental in abetting anti– Islamic hatred like no other form of racism.

We must empathize with those suffering a global hatred; a sense of togetherness has to be greatly influenced. It requires universal and collaborative efforts of all.

10 Lines on Islamophobia in English 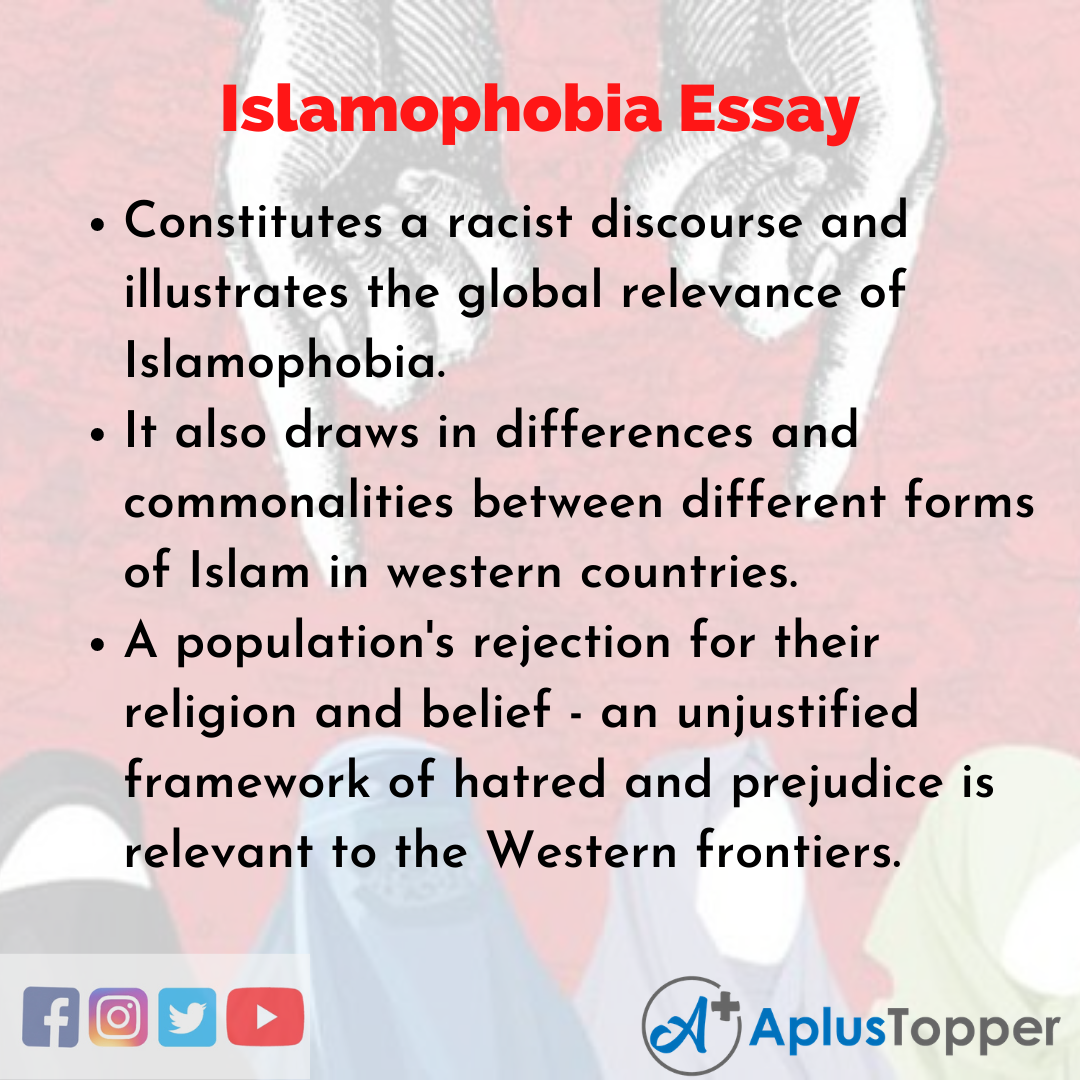 Question 1.
What is Islamophobia?

Answer:
It is a fear, hatred, and prejudice towards a particular religion or community of people. Islamophobia is the rejection of a population for their religion and belief, making it an unjustified framework of hatred and prejudice.

Question 2.
How does Islamophobia affect the life of the people in the community?

Answer:
It is a form of religious intolerance and has been highly misunderstood and misinterpreted – a clear and distinct definition of religious segregation and the failure to acknowledge Muslims’ peaking achievements.

Question 3.
How can we eradicate Islamophobia from the face of the World?

Answer:
Though there has been much debate on how to end Islamophobia, truly, the real strength lies within us. It can only be eradicated by spreading love and changing ignorant hearts and minds.