Part – I
(Answer all questions)

(ii) Figure below shows five dc sources (cells). Their emfs are shown in the figure.

(iii) Which one of the following graphs in figure represents variation of reactance ‘Xc’ of a capacitor with frequency ‘f’ of an ac supply :

(iv) White light is passed through sodium vapors contained in a thin walled glass flask and the transmitted light is examined with the help of a spectrometer. The spectrum so obtained is :
(A) Absorption spectrum
(B) Solar spectrum
(C) Band spectrum
(D) Continuous spectrum

(ii) Which conservation principle is involved in Kirchhoff’s first law of electric circuits ?

(iii) Write an expression of magnetic flux density ‘B’ at a point in end – on position or an axial position of a magnetic dipole. (Derivation not required.)

(iv) In a moving coil galvanometer, what is meant by a radial magnetic field ?

(v) Variation of alternating current T with time lt’ is shown in the graph below: 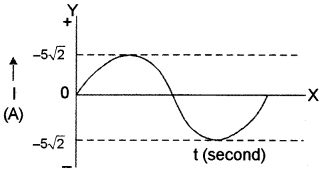 What is the rms value of this current ?

(vii) How did Fresnel construct a biprism in order to study interference of light ?

(x) What condition must be satisfied by two thin lenses kept in contact so that they form an achromatic doublet, i.e., a combination free from chromatic aberration ?

(xi) Threshold frequency of a certain metal for photoelectric emission is 5 × 1014 Hz. Calculate its work function.

(xii) What conclusion was drawn by Rutherford based on Geiger-Marsden’s experiment on scattering of alpha particles ?

(xiv) What is the essential difference between the working of a nuclear reactor and that of a fission bomb ?

(xv) State one important use of Zener diode.
Answer: 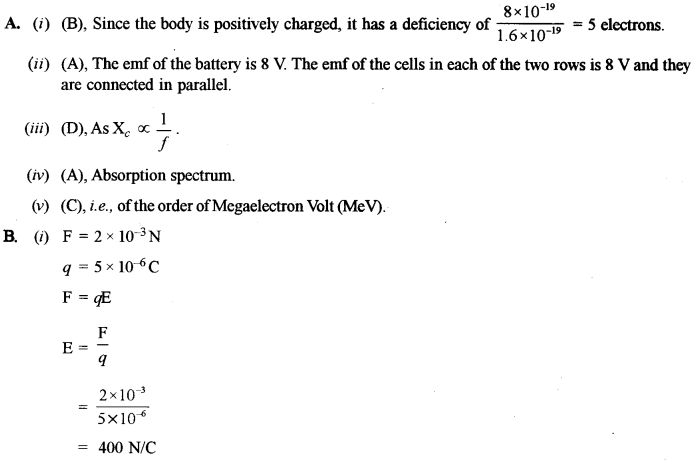 (ii) The Kirchhoff’s first law of electric circuit is based upon the principle of conservation of electric charge which implies that at any node (junction) in an electrical circuit, the sum of current moving into that node is equal to the sum of the current flowing out of that node.
\(\sum_{k=1}^{n} I_{k}=0\)

(vi) Ultraviolet ray has a wavelength greater than X rays and smaller than that of visible light.

(vii) Biprism was constructed by the combination of two prisms of very small refracting angles, placed base to base. In practice, the prism is made from a single plate by grinding and polishing, so that it is a single prism with one of its angles about 179° and other two about 30° each. 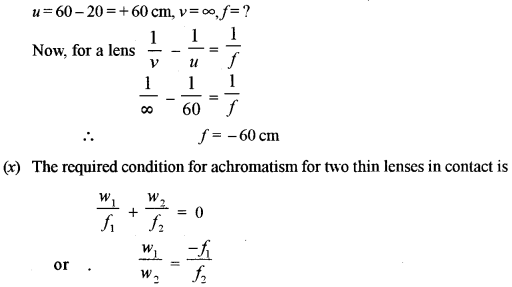 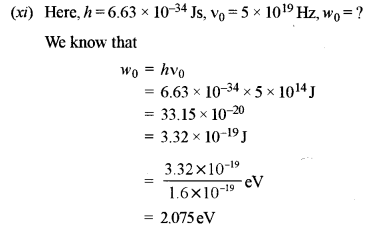 (xii) The following conclusions were drawn by Rutherford from scattering of α-particles :
(1) The whole of +ve charge is concentrated in the nucleus of the atom. This is so because most of a-particles pass straight through the nucleus. Since only a very small fraction of the a-particles is scattered, nucleus must be small.
(2) The whole mass of the atom is also concentrated in a small region.
(3) Nucleus is surrounded by a cloud of electrons whose total – ve charge is equal to the total +ve charge on the nucleus.

(xv) A zener diode is used as a voltage stabiliser.

Part-II
Answer six questions in this part, choosing two questions from each of the Sections A, B and C.

(b) Obtain an expression for equivalent capacitance C, when three capacitors having capacitance C1, C2 and C3 are connected in series. [3]

(c) When a potential difference of 3 V is applied between the two ends of a 60 cm long metallic wire, current density in it is found to be 1 x 10-7 Am-2 . Find conductivity of the material of the wire in SI system. [2]
Answer: 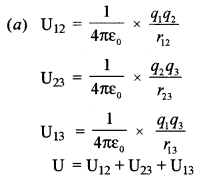 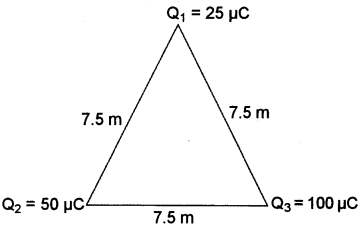 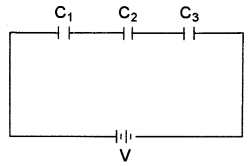 Question 3.
(a) In the circuit shown in figure below, E is a battery of emf 6 V and internal resistance 1 Ω. Find the reading of the ammeter A, if it has negligible resistance : [4] 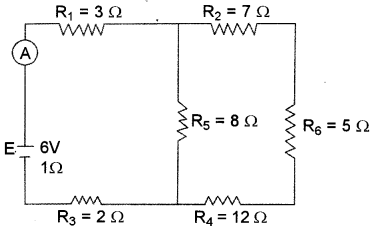 (b) With the help of a neatly drawn and labelled diagram, obtain balancing condition of a Wheatstone bridge. [3] 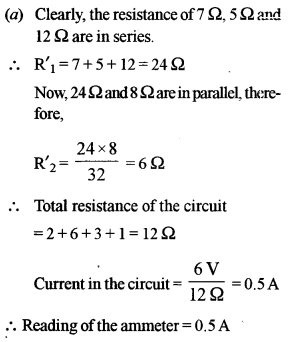 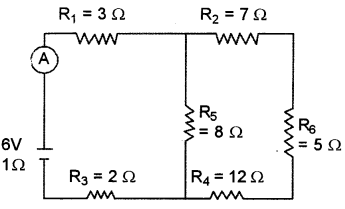 (b) In the figure is shown an unbalanced Wheatstone bridge. A current Ig flows from D to B i.e., D is at a higher potential. Let VA, VB, VC, and VB be the potential at the points A, B, C, and D respectively, then by applying Ohm’s law, we have 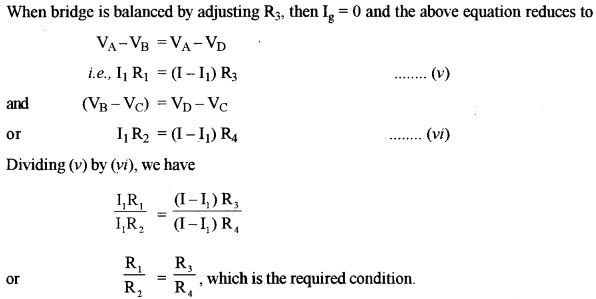 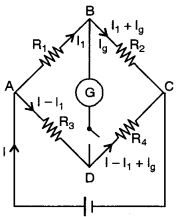 (c) Two differences between Peltier effect and Joule effect are :

(b) What are four different types of energy losses in a transformer? State how to reduce/minimize any one of them. [3]

(c) A 50 μF capacitor, a 30 Ω resistor and a 0.7 H inductor are connected in series to an ac supply which generates and emf ‘e’ given by e = 300 sin (200 t) Volt. Calculate peak value of the current flowing through the circuit. [4]
Answer:
(a) (i) By applying the thumb rule, we find that the magnetic field at P is directed downward perpendicular to the conductor MN.
(ii) Since the currents through the conductor MN and XY are flowing in the same direction, the force will be attractive i.e., the conductor MN is attracted towards XY.

(c) We know that impedance Z of the LCR circuit is 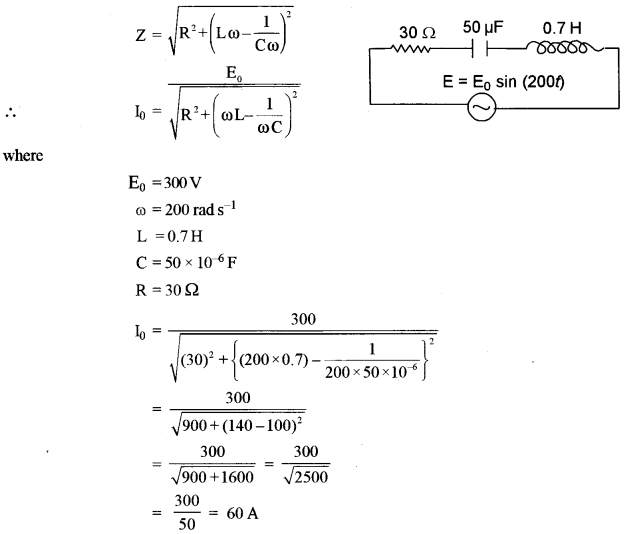 (b) In Young’s double slit experiment using monochromatic light of wavelength 600 nm, interference pattern was obtained on a screen kept 1.5 m away from the plane of the two slits. Calculate the distance between the two slits, if fringe separation/fringe width was found to be 1.0 mm. [2]

(c) Draw a labelled graph to show variation in intensity of diffracted light with angular position, in a single slit diffraction experiment. [2]
Answer: 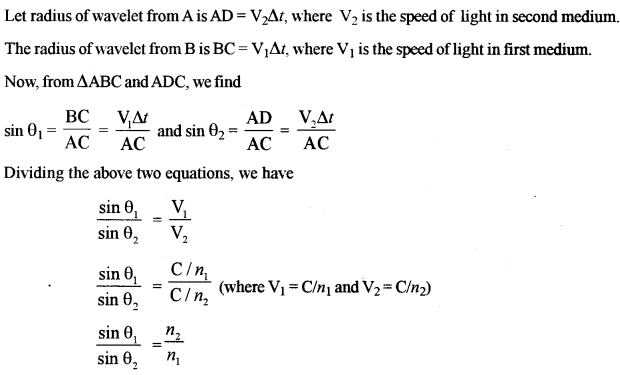 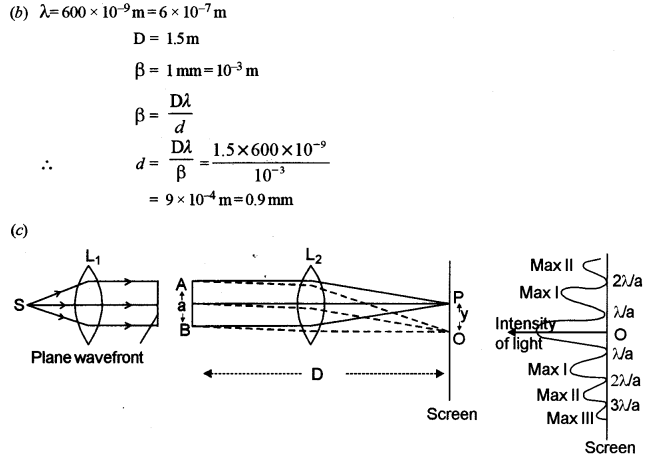 Question 6.
(a) You are provided with a narrow and parallel beam of light. State how you will determine experimentally, whether it is a beam of ordinary (unpolarised) light, partially polarised light or completely polarised light. [3]

(c) Figure below shows a parallel beam of monochromatic light incident on a convex spherical surface, radius of curvature R = 30 cm, which separates glass (refractive index = 1.6) from air. Find the position of the image formed due to refraction of light at this single spherical surface. 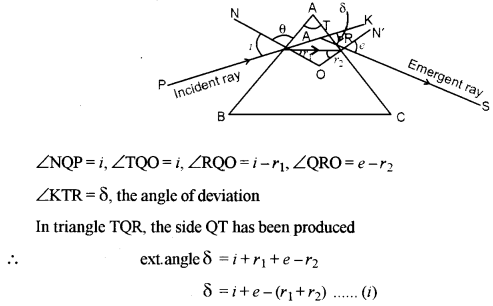 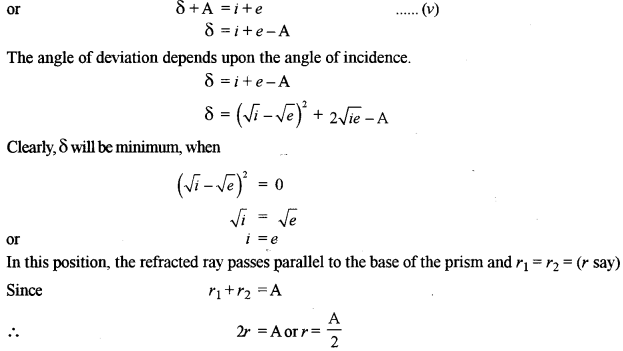 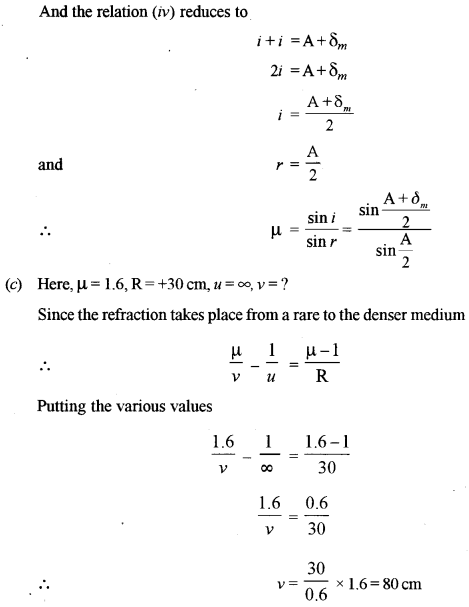 (c) (i) Define Resolving Power of a simple astronomical telescope. [2]
(ii) State one advantage of a reflecting telescope over refracting telescope.
Answer:
(a) (i) (A) Spherical aberration : When a parallel beam of light is incident on a lens, it is observed that the rays suffering refraction from the peripheral portion of the lens comes to focus at a point near the lens and rays suffering refraction from near the axes of the lens comes to focus at a point away from the lens. Due to this, the image is not sharp and is spread along the axis. This defect in the image is called spherical aberration. This aberration is reduced by
(i) using crossed lens
(ii) using an aperture or a stopper.
(B) Chromatic aberration: A lens, as we know, is a combination of prisms placed one above the other with central region behaving as plane glass plate. A prism produces both deviation and dispersion. The deviation suffered by the red color in the incident white light is less as compared with that of violet fight. Thus, instead of getting a point image of a point object, we get a colored image. Thus, the image is distorted. This failure of the lens to bring the rays of different colors to focus at the same point is called chromatic aberration.
(ii) Spherical aberration can be minimized by bending the lens into its best form. The use of symmetric doublets greatly reduces spherical aberration. 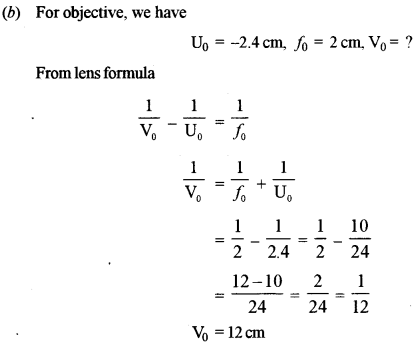 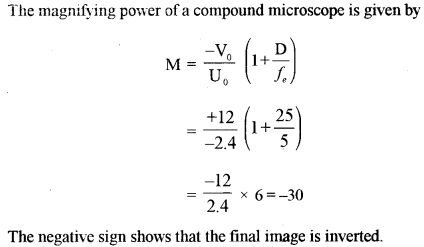 (c) (i) Resolving power of a simple telescope is defined as the ability of an simple telescope to separate point of an object that are located at a smaller angular distance. It is given by following expression:
\(\mathrm{P}_{\mathrm{R}}=\frac{120}{\mathrm{D}_{\mathrm{o}}}\left(\text { where } \mathrm{D}_{\mathrm{o}} \text { is in } \mathrm{mm}\right)\)
(ii) Reflecting telescope does not suffer from chromatic aberration because all wavelengths will reflect of the mirror in the same way which is not the case with refracting telescope.

(b ) Monochromatic light of wavelength 198 nm is incident on the surface of a metal, whose work function is 2.5 eV. Calculate the stopping potential. [3] 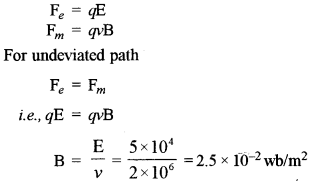 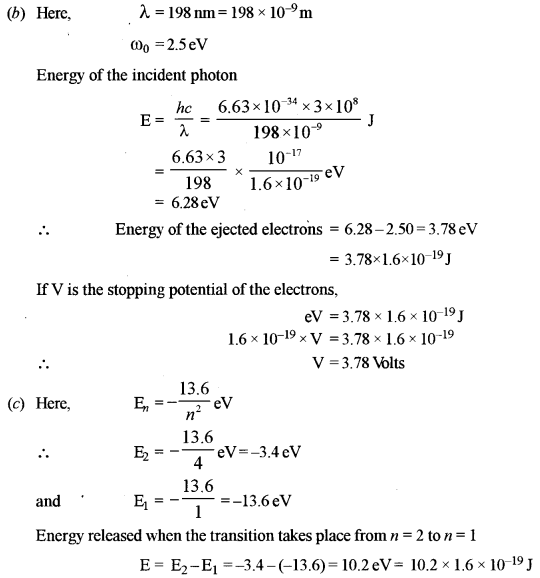 (b) Complete the following table for a radioactive element whose half life is 5 minutes. Assume that you have 32 g of this element at start, i.e., at t = 0. [3]

(c) Calculate the energy released when an electron annihilates a positron. [2]
Answer:
(a) (i) Compton effect: It is the increase in wavelength of the electromagnetic radiation when these radiations are scattered by tree electrons or from elements of low atomic weight. Some of the energy of the incident photon is transferred to the electron due to which its wavelength increases.
(ii) (1) The intensity of the ejected X-rays depends upon the number of electrons striking the anti cathode which in its turn depends upon the heating current in the filament. Thus, the intensity of X-rays can be changed by changing the healing current or temperature.
(2) The penetrating power of the X-rays depends upon the accelerating voltage i.e., potential difference between the cathode and the anti cathode. More the accelerating voltage, more the penetrating power of the X-rays.

(b) The completed table is as given below : Half life of radioactive element is 5 minutes. 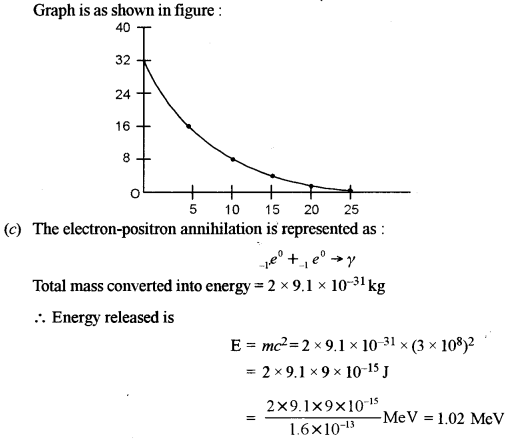 Question 10.
(a) Draw a labelled energy band diagram for a solid which is an insulator. What is the main difference between this diagram and that of a semiconductor ? [3]
(b) Figure below shows the circuit of an electronic device : [3] 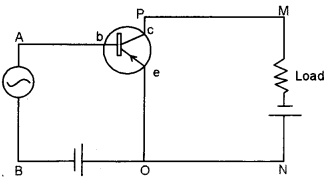 (c) Prepare a truth table for the combination of gates shown in figure below : [2]

The main difference in energy band diagram of solid insulator and that of conductor is in case of insulator there is wide energy gap between valance band and conduction band whereas this gap is small in case of semiconductor.

(b) (i) This is the circuit diagram of a common emitter amplifier (using p-n-p transistor)
(ii) The input is applied in between AB and the output is obtained at load i.e., in between MN.
(iii) The output and input voltage of the given circuit has the phase difference of 180° i.e., there is a phase reversal as shown in the diagram alongside. 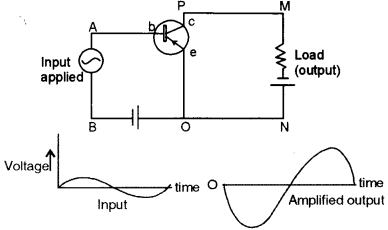