Question 1.
Explain the role of culture in modern games and sports. [10]
Answer:
The culture is that which people invented and which must be transmitted to each new generation. It includes our religion, dress, customs, games and sports. Present is an image of the past. Different types of races, jumping and throwing events etc. are some of the events of modem competitions that are result of the past. The ancient culture determined the past that games and sports played in the life of the people. In Indus Valley civilization swimming was quite popular, in Vedic period arrow shooting, fights with dagger, horse riding, chariot race etc., were popular events. Games like Cricket, Hockey etc. were also introduced later on.

In the end we can say that games and sports were the part of our culture and now different competitions are promoted and developed. By games and sports a person develops the self discipline, tolerance and patience etc.

So we can say that culture has an important role in modem games and sports.

(ii) Fartlek Training Method : Fartlek is a Swedish term which means speed play and has been used by distance runners for years. Fartlek is a form of road running or cross country running in which the runner, usually changes the pace significantly during the run. An advantage of Fartlek is that the athlete can concentrate on feeling the pace and their physical response to it. Fartlek is also beneficial for the average runner.

Question 4.
Briefly explain the following :
(i) Seeding and Byes. [5]
(ii) Knock-out and League. [5]
Answer:
(i) Seeding : Seeding is the processes by which good teams are fitted in fixtures in such a way so that the stronger teams do not meet each other at the onset of the competition.

Byes : Bye is a privilege given to a team generally by drawing lots and exempting it from playing a match in the first round.

(ii) Knock-out : In this type of tournament the team which is defeated once, gets eliminated immediately and will not be given another chance to play.

(ii) Meaning of Rehabilitation : Rehabilitation is the process of providing relief help to disabled, deformed, disfigured or injured people to come back to normalcy and lead a respectable and independent life again. Rehabilitation is an integral part of medical care. In other words giving every possible facility to disabled or handicapped person and making an effort to enable him to lead an honourable life is called rehabilitation.

Question 6.
State the corrective measures of the following postural deformities :
(i) Flat foot [5]
(ii) Knock-knee. [5]
Answer:
(i) Flat Foot: The best treatment to help the child with flat feet and no other problem may be to go barefoot. Walking barefoot on sand or rough ground helps, the feet get stronger and form a natural arch. Walking on tiptoe, skipping rope, and picking things up with the toes may also help. In order to strengthen the feet, the following exercises, if practiced daily, may be helpful: 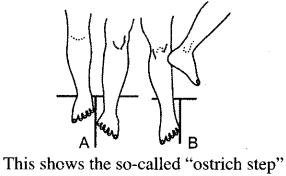 Special exercises, training in ‘foot posture’, shoe adaptations, heel wedges and shoe inserts (heel cups and insoles) are often prescribed to correct flat feet. However, studies show that usually none of these help. Use of insoles to support the arches may even cause weaker arches. Usually insoles should be tried only when pain is a problem, or in some severe flat feet caused by polio, cerebral palsy, or Down Syndrome.

(ii) Knock-knees : If the knock-knees are severe, braces may help straighten the knees and keep the condition from getting worse. In a child over 6 or 7 years old, braces usually do not help. In extreme cases, surgery may be needed. Knock- knees may also lead to flat feet.

Question 7.
(i) Explain the procedure of administering first aid4o a person with a fractured bone. [5]
(ii) What is meant by contusion and abrasion ? [5]
Answer:
(i) Fracture is the term used to indicate that a bone is broken.

(ii) Contusion : A contusion is injury to the muscle, bone or soft tissue of the body. It usually results from blunt force, trauma, certain types of contusions are simply called bruises.

Abrasion : An abrasion is a shallow scrape on the skin surface and most commonly found on the hands, elbows or knees. It can be very painful.

Question 8.
Write any five effects of each of the following on individuals :
(i) Consumption of alcohol. [5]
(ii) Smoking. [5]
Answer:
(i) Five Effects of Consumption of Alcohol: 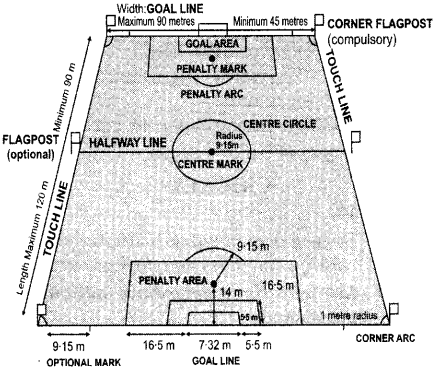 iii. When no goal is scored after tie breaker, alternate penalty kicks are given to each team till the tie is broken. This is called sudden death.

Question 10.
(a) (i) Draw a neat diagram of cricket pitch with specification and dimensions. [5]
(ii) List any three important national tournaments. [3]
(iii) Give the full forms of MCC and ICC. [2]

Question 11. [10 x 2]
(a) (i) When is a goal scored in hockey ? How is the game restarted after a goal is scored ? [5]
(ii) Give the specifications of the following : [3]
(1) Length and width of the court.
(2) Circumference of the ball.
(3) Duration of extra time.
(iii) When can a goal keeper cross the 23 m line ? [2]
(b) (i) What is the difference between a penalty corner and a penalty stroke ? [5]
(ii) Explain the following : [3]
(1) Scoop.
(2) Flick
(3) Lunge.
(iii) When is a sixteen-yard hit awarded? [2]
(c) (i) List the equipment used by the referee drugging a match. [5]
(ii) Explain the term bully in hockey. [3]
(iii) What is the duration of a hockey match? [2]
Answer:
(a) (i) Methods of Scoring :
A goal is scored in hockey when the ball crosses the goal line within the goal post. The ball should have been hit from inside the striking circle or has touched the defender’s stick within the circle. The goal can be scored by way of field goal, penalty corner, long corner or penalty stroke.

To restart the game after the goal is scored, a centre pass is taken by a player of the team against which the goal was scored.

(iii) Sixteen yard hit is awarded when the ball crosses the back line. It is a method of restarting the game by defender.

(c) (i) Equipments used by referee during a match:

(ii) Bully : It is a call used to start or restart play. The referee puts the ball between two opposing players. Two players of both the teams stand in front of each other. They touch this stick to the ground three times and alternately their opponent’s stick after that ball is put is play.

(iii) Duration of a Hockey Match : 4
Quarters of 15 minutes each.

(iii) Legal guarding position is when the , defender merely must have both feet on the floor and be facing the opponent.

Question 13. [10 x 2]
(a) (i) Write any five fundamental skills required by a player in the game of volleyball. [5]
(ii) Name any three of the national tournaments. [3]
(iii) Explain the following terms : [2]
(1) Under hand service
(2) Round arm service.
(b) (i) Explain the procedure to be followed for a substitution during the play. [5]
(ii) Mention any three acts of breach which are punishable. [3]
(iii) Give the specification of the net used in the game of volleyball. [2]
(c) (i) List the officials required for conducting a match. [5]
(ii) State any three duties of a coach during the match. [3]
(iii) What is the role of a setter in the game ? [2]
Answer:
(a) (i) Five fundamental skills required by a player:

(iii) Difference between a volley and a lob : A volley : When a player strikes the ball without allowing it to touch the ground.
A lob : Hitting the ball high into the air to drive the opponent back from the net.

(ii) Change of Ends : The player shall change sides at the end of the first third and every subsequent alternate game of each set.

(iii) When the ball crosses the side line and back line and then touches the ground, the ball is considered out of play.

(iii) Before commencing play the opposing side shall toss, the winner is free to change side or service.

(c) (i) Fundamental skills required by a player:

(ii) Rally : A sequence of one or more strokes starting with the service, until the shuttle ceases to be in play.

Question 16. [10 x 2]
(a) (i) Explain synchronized swimming. [5]
(ii) Give specifications for the starting platform: [3]
(1) Height of starting platform
(2) Area of the platform.
(3) Maximum slope of the platform.
(iii) What is meant by relay ? [2]
(b) (i) Mention five duties of the starter. [5]
(ii) State any three types of strokes used in swimming. [3]
(iii) What is meant by dolphin kick ? [2]
(c) (i) Explain the correct procedure of doing butterfly stroke. [5]
(ii) What should be the minimum temperature and the maximum temperature of the pool during a competition ? [3]
(iii) What is the full form of FINA ? [2]
Answer:
(a) (i) Synchronized Swimming: Synchronized swimming is a hybrid of swimming performing a synchronized routine of elaborate move in the water accompanied by music. It demands advanced water skills and required great strength,- endurance etc. Synchronized swimming is both an individual and team sport.

(iii) Relay : A swimming relay is when four swimmers perform to complete the race is (4 x 100 m) in the distance divided in four each swimmer completes equal number of distances.

(iii) Dolphin kick : A swimming kick used mainly in butterfly stroke in which the legs are extended straight back and moving up and down in unison with a slight bend in the knees on the upward movement.

(ii) Block Clearance : As the athlete drives from the blocks the rear leg is pulled through fast the front leg fully extends the arms drive vigorously in a short arm action while the head remains in a natural line with the trunk.

(ii) (1) False start:
(a) A false start occurs if any movement is made before firing of the Pistol.
(b) If any movement occurs in the “set” position.
(2) Triple Jump : Triple jump is also called Hop step and Jump on the hop the jumper lands on the same foot after hop take off on the left foot upon which he landed and last phase of the event with jump. The jump is a normal long jump action, in which the jumper takes off from , the foot he had landed on the step.

(iii) Relay : Relay requires four sprinters together running a complete lap of the track, passing on a baton which has to arrive at the finish lines with the runner of the east leg.