(Candidates are allowed additional 15 minutes for only reading the paper.They must NOT start writing during this time.)

Question 1. [10 x 2]
(i) Why is the location of India in the Indian Ocean considered to be significant ? Give two reasons.
(ii) With reference to the extent of India, write the angular values of the points marked as (a), (b), (c) and (d) in the map given below : 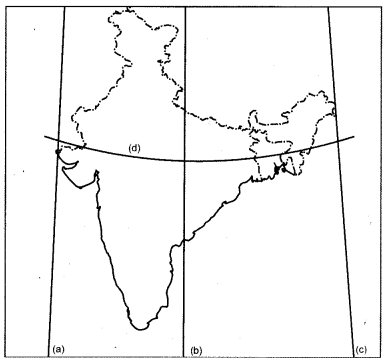 (iii) Name the four Indian geological eras in their chronological order.
(iv) Briefly explain any two factors responsible for the depletion of forests in India.
(v) Mention any two differences between the Bhabar and the Tarai regions.
(vi) Briefly explain the following terms :
(a) Psychological Density
(b) Conurbation
(vii) State two problems affecting the fishing industry in Bangladesh.
(viii) Name one mining centre for each of the following :
(a) Mica in Andhra Pradesh
(b) Iron ore in Odisha
(ix) Name the two terminals of the East-West corridor.
(x) What is an agro-based industry ? Which is the largest agro-based industry in India ?
Answer:
(i) India stands at the head of the Indian Ocean at the very center of the Eastern Hemisphere commanding trade routes running in all directions. It’s location, size and economic resources have made it the most dominating country among the littoral states. It serves as a great linkage between the countries lying on its coasts and further beyond. Thus, the location of India in the Indian Ocean is considered to be significant.

(iv) Factors responsible for the depletion of forests in India are :

(viii) (a) Nellore district.
(b) Keonjhar or Mayurbhanj districts.

(ix) The two terminals of the East-West corridor are Silcher in Assam and Porbandar in Gujarat.

(x) Agro-based industries are the ones that depend on the raw materials produced in the agricultural sector. These are mostly consumer goods industries which are important both in respect of their contribution to total industrial output as well as to employment. The largest agro-based industry in India is the cotton textile industry 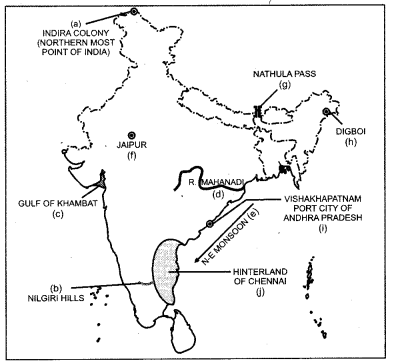 Question 3.
(a) Briefly explain the geological evolution of the Himalayas. [3]
(b) Explain giving any two reasons why the deltas of the river Mahanadi suffer from occasional floods. [2]
(c) Study the temperature and rainfall graph of station X given below and answer the questions that follow : [3] 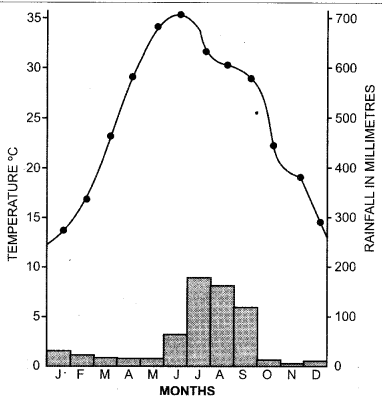 (i) Is the location of station X inland or coastal ?
(ii) What is the cause of sudden fall of temperature in July, even though it is a summer month ?
(iii) Mention one main feature of the climate experienced by the station X.
(d) What is Agro-forestry ? Mention any two benefits of Agro-forestry. [2]
Answer:
(a) The Himalayan ranges were formed when the Indian plate was driven northwards and pushed beneath the Eurasian Plate. With the advance of the Indian Plate towards the north, the Tethys started contracting about 65-70 million years ago. About 30-60 million years ago, the two plates came closer and the Tethys sea crust began to fracture into thrust edges. About 20-30 million years ago, the Himalayan ranges started emerging.

(b) The deltas of the river Mahanadi suffer from occasional floods because of :

(c) (i) Inland.
(ii) The cause of sudden fall of temperature in July is due to the onset of the monsoon season. There is a fall of temperature from July to September because of rainfall during this period.
(iii) The station experiences continental type of climate with marked seasonal changes with respect to temperature and rainfall.

(d) Agro forestry involves the raising of trees and agricultural crops either on the same land or in close association in such a way that all land including the waste patches is put to good use. Two benefits of Agro-forestry are :

Question 4.
(a) (i) Define index of concentration. [1]
(ii) How is it useful in the study of population? [1]
(b) Differentiate between natural growth of population and migratory growth of population. [2]
(c) Explain why sex composition is an important demographic attribute of the population in India. [2]
(d) Figure A and B given below show two types of settlement patterns that have developed in India [2] 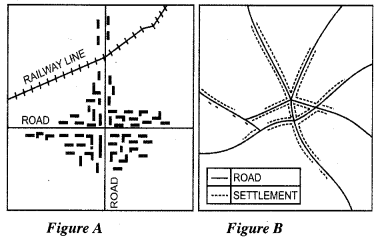 (b) Natural Growth of Population

(c) Sex composition is a very important demographic attribute of population. Separate data for males and females is important for various types of planning and for other demographic characteristics such as natality, mortality, migration, marital status, economic characteristics, etc. The balance between the two sexes affects the social and economic relationships within a country.

The sex ratio in India has fallen from 972 in 1901 to 933 in 2001. This is a very serious trend which speaks volumes of the second rate treatment given to females in India. This dangerous trend must be checked at all costs and females must be given their proper place in society. Only then India can look forward for the overall development of the country.

(d) (i) Settlement patterns in :
Figure A: Checker Board or Rectangular pattern.
Figure B : Star-like pattern.

(ii) The characteristic features are :

Figure A : Checker board or rectangular pattern of settlement develops in villages at the meeting place of two roads. The streets are either parallel or perpendicular to each other and the settlement takes a rectangular shape. These are found in the northern plains, especially in the Ganga-Yamuna Doab and also in Tamil Nadu, Karnataka and Andhra Pradesh states of South India.

Figure B : A village acquires a star-like pattern of settlement when streets radiate from a common centre. Such villages are found in Tamil Nadu and in the Upper Ganga plain.

(e) (i) Urbanisation refers to the population shift from rural areas, the gradual increase in the proportion of people living in urban areas, and the ways in which each society adapts to this change.

(ii) The main components of urbanisation are :

Question 5.
(a) Briefly explain any two adverse effects of small and fragmented holdings on agricultural productivity [2]
(b) State two ways in which forest area in our country can be increased.
(c) Mention three constraints explaining why cultivable waste land is not being used for cultivation at present. [3]
(d) In which two ways are tube-wells better than ordinary wells as a form of irrigation ? [2]
(e) With reference to canal irrigation, name one canal in each of the following states [1]
(i) Uttar Pradesh
(ii) Punjab
Answer:
(a) Effects of small fragmented holdings on agricultural productivity are :

(b) Forest area can be increased by :

(c) The constraints are :

Question 6.
(a) (i) What is crop rotation ?
(ii) Mention two reasons why crop rotation is necessary in India.
(b) What is the importance of animal husbandry in Indian agriculture ? [2]
(c) Differentiate between pelagic fish and demersal fish. [2]
(d) Name the following : [3]
(i) A geothermal energy plant in Himachal Pradesh.
(ii) An offshore oilfield in the country.
(iii) The nuclear power station in Tamil Nadu.
Answer:
(a) (i) The growing of different variety of crops in succession on a piece of land to avoid ‘exhausting the soil and to control weeds, pests & diseases is called crop rotation.
(ii) Crop rotation is necessary in India as :

(b) Animal husbandry forms a very important part of Indian agriculture. Animal husbandry and Dairy development plays a prominent role in the rural economy in supplementing the income of rural households, particularly, the landless and small and marginal farmers. It also provides subsidiary occupation in semiurban areas and more so for people living in hilly tribal and drought prone areas where crop output may not sustain families.

Question 7.
(a) Explain two factors that affect inland waterways in India.
(b) Give reasons for the following [3]
(i) There is a dense network of railways over the North Indian Plains.
(ii) Peninsular Plateau has a high proportion of metalled roads.
(iii) A good transport network promotes industrial development.

(c) Mention one advantage and one disadvantage of air transport. [1]
(d) Differentiate between Telecommunication and Mass Communication. [2]
(e) State any two ways in which radio can still be considered as a powerful means of mass communication in remote areas. [2]
Answer:
(a) Factors affecting inland waterways in India are :

(b) North Indian Plains have a dense network of railways because :

(i) 1. Northern plain area is a densely populated region with highly developed agriculture and industry.
2. Large scale urbanisation and industrialisation have created a great demand for rail transport.
3. It is a flat plain which is suitable for the construction of Railways.

(ii) Peninsular Plateau has a high proportion of metalled roads due to :

(c) Advantage of air transport : It is very essential for a vast country like India where distances are large, and the terrain and the climatic conditions are so diverse. It is the fastest mode of transport which has reduced distances and converted the world into one unit.

Disadvantage of air transport : It is the ‘costliest mode of transport which many people cannot afford.

(e) Radio is a powerful medium which provides all sorts of useful information, news and a variety of entertainment. AIR broadcasts in 24 languages and 146 dialects with a total network of 225 broadcasting centres covering 91.4% of the country, almost reaching the entire population in a linguistically diverse country like India.

Question 8.
(a) Mention two reasons for the development of the Bengaluru-Tamil Nadu Industrial Region. [2]
(b) Give three reasons to explain the development of sugar industry in Maharashtra. [3]
(c) State two advantages that mini steel plants have over large integrated steel plants. [2]
(d) (i) Define tourism. [1]
(ii) State any two advantages of tourism in India. [1]
Answer:
(a) Bengaluru – Tamil Nadu Industrial Region has experienced the fastest industrial growth in the post-independence era as :

(b) Maharashtra is the most important state where sugarcane cultivation and sugar mills are integrated in co-operative system. In fact, Maharashtra has emerged as India’s largest producer of sugar, producing about one-third of India’s sugar due to :

(d) (i) Travelling to less disturbed or polluted natural areas with a view to study, admire and enjoy the beautiful aspects of a place along with the wild plants and animals and the cultural beauty (past and present) located in these areas is called tourism.

(ii) Advantages of tourism in India are :

(b) Explain giving two reasons why there is a need for planned development for a country like India. [2]
(c) Mention any two factors which have influenced the development of the Electronic City of Bengaluru. [2]

(d) (i) What is sericulture ?
(ii) Name two main districts of Silk production in Chhattisgarh.

(e) With reference to Haldia port, answer the following [2]
(i) Where is the port located ?
(ii) State the need for the development of this port.
Answer:
(a) (i) A planning region is a self-created living organism, having a life time which not only supports the life in the region but also radiates unifying forces that enable the region to be a unified regional space so as to facilitate the practice of regional planning.

(ii) Characteristics of a planning region are :

(c) Factors that influenced the development of the Electronic city of Bengaluru are :

(d) (i) Sericulture is a labour intensive industry that deals with the production of silk and the nearing of silkworms for this purpose. It provides employment to a large number of people. Silk is produced by small units usually by individual families.
(ii) Silk in Chhattisgarh comes from Bastar and Bilaspur districts.

(e) (i) It is located at the confluence of rivers Hugli and Haldia about 105 km downstream from Kolkata.
(ii) Haldia post has been developed to release congestion at the Kolkata port and to enable docking of larger vessels which cannot enter the Kolkata port.