(Candidates are allowed additional 15 minutes for only reading the paper.They must NOT start writing during this time.)

Question 1. [10 x 2]
(i) Give two reasons to explain why India is considered to be a subcontinent.
(ii) The figure below represents a topographic section from the Himalayas to the Peninsular region. Identify any two of the features marked A, B, C and D.

(iii) With reference to river Godavari, name the following :
(a) The State where it originates.
(b) The State where it forms its delta.
(iv) What is urban forestry ? Mention any two of its objectives.
(v) State two reasons to explain why irrigation is necessary in India.
(vi) Briefly explain any two problems caused by Green Revolution with respect to Indian agriculture.
(vii) State any two important aspects of environmental management.
(viii) Mention two ways in which hydroelectric power is better than nuclear power.
(ix) Give two advantages of transportation by roadways.
(x) Mention two major challenges faced by the tourism industry in India today.
Answer:
(i) India is called a subcontinent because of its :

(iii) (a) Godavari originates in the Nashik district of Maharashtra.
(b) Godavari forms its delta before joining Bay of Bengal in Andhra Pradesh.

(iv) Urban forestry pertains to raising and management of trees on public and privately owned lands in and around urban centres. It includes green-belts, road side avenues, parks etc. Its main objectives are :

(v) Irrigation is necessary in India because of :

1. Inter-crop Imbalances : Though all the crops like wheat, rice, jowar, bajara and maize have gained from Green Revolution, it is wheat which has benefited the most. The HYV seeds for pulses and oilseeds have not been developed so far at all. The result is an excess of production in two main food grains-wheat and rice and shortages in most other like oilseeds and pulses.

2. Regional Disparities : Green Revolution affected only those areas which were already better placed from an agricultural point of view like Western U.P., Punjab and Haryana in the north and Tamil Nadu and Andhra Pradesh in the south. It has hardly touched Eastern India, Assam, Bihar, West Bengal and Odisha.

(x) Challenges faced by the tourism industry in India today are : 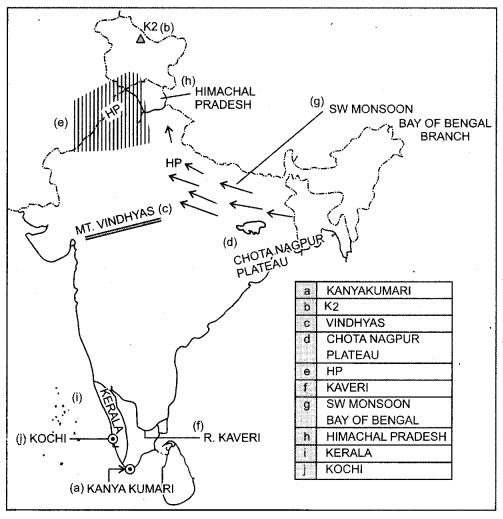 Question 3.
(a) Give three differences between the Western and the Eastern Himalayas. [3]
(b) Explain the following : [2]
(i) The Himalayan rivers are typical examples of antecedent drainage.
(ii) Jaisalmer receives very less rainfall annually.
(c) Study the climatic data provided in the table below for a city A in India and answer the questions that follow : [2]

T = Mean monthly temperature in degree Celsius (°C).
R = Average monthly rainfall in millimetres (mm).
(i) What is the cause of low rainfall in station A ?
(ii) Calculate the range of temperature of this station.
(d) (i) State how rainfall and temperature influence the vegetation type in India. [2]
(ii) Why are tropical evergreen forests not very important economically ? [1]
Answers:
(a) Differences between the Western and the Eastern Himalayas

(b) (i) Antecedent drainage is a river system originating before a period of uplift and folding of the land as a result of earth movements. The Himalayan rivers like Indus, Satluj and the Brahmaputra continue to cut down their valley at approximately the same rate as the uplift of the land and so maintain the general pattern and direction. So these rivers are known as Antecedent drainage.

(ii) Tropical evergreen forests are not very important economically because :

Question 4.
(a) Why is the dependency ratio higher in rural areas than in urban areas ? State two reasons. [3]
(b) Distinguish between metropolis and megalopolis.
(c) With reference to the linear rural settlement pattern, answer the following: [2]
(i) How does this pattern develop ?
(ii) Name any two areas where this pattern is found in India.
(d) Define density of population. What is India’s density of population as per the 2011 census ? [2]
(e) The graph below shows the percentage decadal growth rate of India for a period from 1971 to 2011. [2] 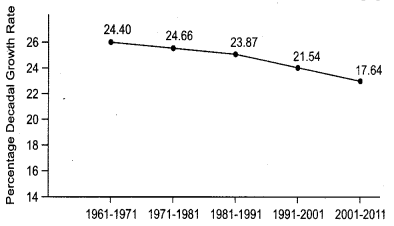 (i) What is the unique characteristic of growth during this period ?
(ii) Explain the reason causing this uniqueness.
Answer:
(a) Dependency ratio is higher in rural areas because :

(b) Metropolis
Metro cities are cities with a population of more than 1 million. e.g., Allahabad, Kanpur, Pune, Kochi.

Megalopolis
Mega cities are those with a population of over 5 million. e.g., Mumbai, Delhi, Kolkata, Chennai, Bengaluru, Hyderabad.

(c) (i) Linear rural settlements develop along a stream, inhabited by different tribal groups or the fishing villages in the coastal areas.
(ii) Manipur, Balaghat in M.P., Raigarh district in Chhattisgarh.

(d) Density of population is a ratio of total population to the total area of the country or a part of it.

Measures to improve it :

(b) (i) Land which was used for cultivation but is temporarily out of cultivation.
(ii) Farming practices which will help to reduce the effect of fallow land :

(c) Wells, tanks and inundation canals are called primitive methods of irrigation which are inefficient, uneconomical and inconvenient. Only limited area can be irrigated while tubewell is capable of irrigating about ten times more the area as compared to an ordinary well. Perennial canal is much better than inundation canals because it can irrigate larger areas and provides regular irrigation throughout year. Overwatering leads to serious problems of soil salinity and alkalinity.

Question 6.
(a) (i) What is intensity of cropping ? [2]
(ii) Explain why there is a variation of cropping intensity in Punjab and Rajasthan.
(b) (i) Name the largest cotton producing state in India. [2]
(ii) What are the geographical conditions required for the growth of cotton?
(c) What are the three advantages that Japan has over India with respect to marine fishing ? [2]
(d) Name the largest producing state for each of the following minerals and also give one use of each of these minerals : [2]
(i) Manganese
(ii) Mica
Answer:
(a) (i) “Intensity of cropping” refers to the number of crops raised on a field during an agricultural year. The total cropped area as a percentage of the net sown area gives a measure of cropping intensity.

Question 7.
(a) State any two advantages of railways in India.
(b) With reference to the Jawaharlal Nehru Port, state the following : [3]
(i) Its hinterland.
(ii) Two items of export.
(iii) Two items of import.
(c) (i) Name the city which has the oldest artificial harbour on the east coast of India. [1]
(ii) State two geographical problems faced by this harbour. [2]
(d) State any two ways in which cinema can be considered as powerful means of mass communication. [2]
Answer:
(a) Advantages of Railways in India :
(i) It forms a major employment sector as lakhs of people are dependent on railways for their livelihood.
(ii) Railways serve as the cheapest mode of transport for bulky products over long distances.
(iii) Railways serve as the principle mode of transport for both freight and passengers.

(c) (i) Chennai.
(ii) 1.Severe tropical cyclones in the month of October – November which frequently originate in the Bay of Bengal, pose serious threat to fishermen.

2. The port is ill-suited for large ships because of the lesser depth of water near the coast.
(d) Ways in which cinema can be considered as a powerful means of mass communication are :

Question 8.
(a) Mention any three factors that determine the location of an industry. [3]
(b) (i) What are industrial clusters ? [3]
(ii) Identify one industrial cluster from Northern India. State two reasons for its growth.
(c) Explain the following : [2]
(i) Weight losing raw material.
(ii) Integrated steel plant.
(d) State any two negative impacts of tourism on the environment. [2]
Answer:
(a) Three factors determining the location of an industry are :

(i) Raw Material : Industries which use heavy and bulky raw materials in their primary stage in large quantities, are usually located near the supply of the raw material, to bring down the cost of production e.g., Iron and Steel industry.

(ii) Power : Regular supply of power is a prerequisite for the localisation of industries. Tata Iron and Steel Company at Jamshedpur, Aluminium Plant at Korba in Chhattisgarh and Renukoot in U.P., Copper smelting plant at Khetri, Rajasthan are near the sources of power and raw material.

(iii) Transport : Transport by land or water is necessary for the assembly of raw materials and for the marketing of finished products. The location of many industries around Kolkata, Mumbai and Chennai is due to the development of railways in India, connecting the port towns with their hinterlands.

(b) (i) Industries tend to be concentrated in a few pockets because of certain favourable factors. The pockets having high concentration of industries are known as industrial clusters.
(ii) Gurgaon-Delhi – Meerut industrial region. Two reasons for its growth are :

(c) (i) Raw materials which lose their weight in the process of manufacture are known as weight losing raw materials, e.g., sugar industry, iron and steel industry, aluminium industry.
(ii) Integrated Steel Plant : All three processes from melting of iron ore in the blast furnace to steel making followed by shaping of the metal by rolling is carried out under one complex.

(d) (i) The unplanned and unchecked growth of tourist centres deprives the tourists of the original charm and ultimately proves disastrous. e.g., Darjeeling, Mussoorie, Shimla.
(ii) The area around a tourist spot is covered by commercial constructions and even by industries. Such unplanned growth tarnishes the image of the concerned spot. e.g., The Meenakshi Temple at Madurai, The Palace of Udaipur in Rajasthan.

Question 9.
(a) What is meant by development ? What is the geographer’s perspective to development ? [2]
(b) Apart from the Central Level Planning, what are the other levels in the multilevel planning ? [2]
(c) With reference to Haldia Port, answer the following questions : [3]
(i) Location of the port.
(ii) Hinterland.
(iii) Reason for its development.
(d) With reference to mining in Chhattisgarh, name the following : [3]
(i) The largest coal field.
(ii) The largest iron-ore mine.
(iii) A bauxite mining centre.
Answers:
(a) Development implies overall improvement in economic, social and political conditions of a society. It is not only area specific but also time specific. Geographer’s conceptualization of development is much more comprehensive. It considers economic progress, social advancement, political development and environmental preservation. It is an integrating discipline and offers a unique synthesis of development of natural and human resources.

(c) (i) Haldia port is located at the confluence of rivers Hooghly and Haldi about 105 km downstream from Kolkata.
(ii) Hinterland covers a vast area including almost the whole of eastern and north-eastern parts of the country, West Bengal, Bihar, Jharkhand, Uttar Pradesh, Uttarakhand, Sikkim, Assam, Arunachal Pradesh, Nagaland, Manipur, Mizoram, Meghalaya, Tripura and northern parts of Chhattisgarh and Madhya Pradesh
(iii) Haldia port has been developed to release congestion at Kolkata port.