Question 1. [20]
(i) Mention the latitudinal and the longitudinal extent of India.
(ii) What is a subcontinent? Why is India referred to as an Indian subcontinent?
(iii) Explain the term braided river. Give an example.
(iv) What is meant by Break in Monsoons? Why does it occur?
(v) Mention any two problems caused due to the growth of large cities.
(vi) Why is watershed management important? Name the water harvesting programme implemented in Andhra Pradesh.
(vii) Name any two narrow gauge railway lines present in the Himalayan region.
(viii) Name any two important means of mass communication.
(ix) Name the largest coalfield of Chhattisgarh. State its importance.
(x) Study the Temperature-Rainfall graph of station X below and answer the questions that follow : 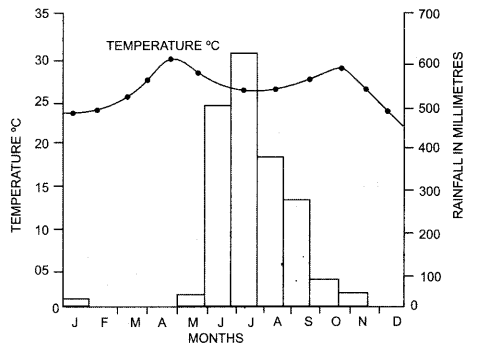 (ii) A landmass which is separated from the rest of the continent by water bodies or mountains is called a subcontinent.

India is called a subcontinent because of its : (a) Vast size, (b) diversity, (c) the ice covered lofty Himalayas in the North, (d) the vast Indo-Ganga plain to its south, (e) the Thar desert, (f) the uneven Deccan plateau, (g) the high temperature and heavy rainfall . from the tropical monsoon climate.

(iii) The river carries a heavy load some of which is deposited on its bed. This may produce mounds which divide the river into several channels. When this happens, the river is said to be braided, e.g., the river Kosi or the lower course of river Ganga.

(iv) When the south-west monsoon fails to bring rainfall for two or more weeks and there is a dry spell in the rainy season, it is called the break in the monsoon. This break is caused due to :
1. Failure of the tropical depressions,
2. Continuous rainfall L.P. trough changes to H.P. monsoon trough is dislocated and rain becoming winds change their direction.

(v) The essential problems caused due to the growth of large cities are :
Unemployment: When people migrate to the cities, they do not find appropriate jobs and add to the problems of unemployment in the cities. The rural folks are generally unskilled, illiterate, hardly willing to work in the agricultural fields. They are often thrown out . of the villages as surplus labour force due to mechanisation of agriculture.

Pollution : The haphazard and uncontrolled growth of cities had led to the unprecedented environmental pollution including pollution of air, water and land within the cities and in areas surrounding them.
Growth of Slums and Squatter Settlement: Unplanned and haphazard growth of urban areas is the cause of spread of slums and squatter settlements.

(vi) Watershed management is a very important means to conserve water resources which help to increase agricultural production and stop ecological degradation. The scheme also helps the rural people to conserve water for drinking, irrigation, fisheries and afforestation and allied activities like horticultural, agroforestry and silviculture. The name of the water harvesting program implemented in Andhra Pradesh is Neeru Meeru (Water and You).

(x) (a) Yes, it is Coastal: The annual range of temperature is only 6°C. The area is influe- need by the moderating influence of the sea.
(b) The Arabian sea branch of south-west monsoon.

Question 2. [10]
On the outline map of India provided :
(a) Mark the Cardamom Hills.
(b) Mark the Bomdi La Pass.
(c) Shade a drought-prone area in Western India.
(d) Shade a region along the Eastern coast where deltaic forests are found.
(e) Mark and name a coalfield in Jharkhand.
(f) Mark and name the city where Hindalco is located.
(g) Trace the course and name the river on which Bhakra-Nangal Hydroelectric power station is set up.
(h) Shade and name the state where Tank irrigation is mainly practised.
(i) Mark the port ofMarmagao.
(j) Trace the route of National Highway 2. Name any one of its terminal towns.
Note: All the map work, including legend (Index) should be done on the map sheet only.
Answer: Question 3.
(a) Explain the formation of Himalayas with reference to the theory of Plate Tectonics. [3]
(b) State two differences between Himalayan and Peninsular river systems. [2]
(c) List three measures undertaken by the . government to conserve and develop forestry in India. [3]
(d) Write any two objectives of urban forestry. [2]
Answer:
(a) According to the plate tectonic theory, the Himalayan ranges were formed when the Indian plate was driven northwards and pushed beneath the Eurasian plate. With the advance of the Indian plate towards the north, the Tethys started contracting about 65 to 70 million years ago. About 30 to 60 million years ago, the two plates came closer and Tethys sea crust began to fracture into thrust edges. About 20 to 30 million years ago, the Himalayan ranges started emerging.

(c) The measures undertaken by the Govt, to conserve and develop forestry in India are :

(d) The two objectives of Urban Forestry are :

Question 4.
(a) State any two factors responsible for isolated settlement in the Northeastern States of India. [2]
(b) Give three reasons for the large-scale migration from rural to urban areas. [3]
(c) Define the term sex ratio. Mention any two reasons for the low sex ratio in India. [3]
(d) What are the two negative impacts of the high percentage of non-working population on the Indian economy ? [2]
Answer 4.
(a) The two factors are :

(b) Three reasons for largescale migration are:

(c) The sex ratio is defined as the number of females per thousand males in the population. Male child receives a preferential treatment while the female child is neglected. With small family norms, many young couples do not go in for a second child if the first child happens to be a male.

(d) The two negative impacts are :

Question 5.
(a) (i) State two reasons for the rapid reduction in area irrigated by tanks in India. [4]
(ii) Mention any two geographical conditions required for the setting up of tanks.
(b) (i) What is meant by Net sown area? [4]
(ii) State the significance of Net sown area in India.
(iii) What are the two adverse effects of small and fragmented farm holdings on the agricultural productivity ?
(c) Enumerate any two important aspects of environmental management. [2]
Answer:
(a) (i) The first reason is that the tanks cover large areas of cultivable land which could be used for cultivation. The second reason is that the tanks dry up during the dry seasons and fail to provide irrigation when it is needed the most.
(ii) The two geographical conditions are :

(b) (i) The total area of land used for cultivation at least once in a year.
(ii) The net sown area is the means to meet the food and other requirements of the rapidly increasing population in India.
(iii) The two adverse effects are :

(c) The important aspects are :

Question 6.
(a) What are the two climatic conditions required for the cultivation of ground-nuts in India? [2]
(b) Give three reasons for the high Jute production in India and Bangladesh. [3]
(c) Discuss any three problems associated with the use of thermal power. [3]
(d) Name any two river valleys responsible for the bulk production of coal in India. [2]
Answer:
(a) Two climatic conditions are :

(b) 1. Jute requires hot and humid climate with temperature between 24°C and 35° C, rainfall over 150 cm.
2. The relative humidity should be nearly 90%.
3. Well-drained alluvial soil, which are frequently renewed by foods are best suited for the cultivation of jute. Since India and Bangladesh provide these ideal conditions, jute is best grown in these regions.

(c) The three problems are :

(d) The river valleys are :

Question 7.
(a) Briefly explain the three advantages of using roadways in comparison to railways. [3]
(b) Mention any two products which are transported through a pipeline. State any one advantage of this method of transportation. [3]
(c) Name any two major ports located on the Western Coast of India. [2]
(d) Discuss the role of communication as an infrastructural resource in the country’s development. [2]
Answer:
(a) 1. Road transport is more flexible than rail as buses, trucks and cars may be stopped anywhere and at any time for passengers and goods whereas trains stop at stations only.
2. Roads can negotiate high gradients and sharp turns to reach at almost all areas whereas trains cannot do the same. Roads can be constructed at hilly areas also.
3. Road transport provides door to door service, can connect farms, fields, factories and market very easily.

(b) Petroleum/milk /water /gas /petroleum products, etc.
Advantage —can be constructed even across water or difficult terrains and needs very little maintenance.

(d) The communication system contributes to the development of the economy, social relationship and also helps in promoting cultural unity. In the event of any calamity, accident or emergency, instant means of communication flash the news across the globe so that relief can be rushed to the spot immediately.

Question 8.
(a) Discuss the two ways in which cement industry is important for the growth of a country. [2]
(b) State any two factors that determine the location of the readymade garment industry in India. [2]
(c) State any three advantages of setting up Mini steel plants. [3]
(d) Name the following : [3]
(i) A pilgrimage centre in Himachal Pradesh.
(ii) A historic place in Rajasthan.
(iii) An important hill resort of West Bengal.
Answer:
(a) (i) Cement is indispensable for building and construction works and hence cement industry is considered to be an important infrastructure core industry.
(ii) It can play a significant role in the overall economic growth as India has emerged as a major exporter of cement.

(b) (i) Presence of market for ethnic designs and colors combinations.
(ii) Power/energy.

(c) The three advantages are :

Question 9,
(a) With reference to Haldia Port, answer the following questions : [3]
(i) At the confluence of which two rivers is it located ?
(ii) Why was the port developed ?
(b) What is a micro region ? Give an example of it. [2]
(c) Which river drains into the Chhattisgarh basin ? What is the predominant crop of this region ? [2]
(d) Why does the need for the development of a region arise ? Give any three points in support of your answer. [3]
Answer 9.
(a) (i) Haldia port is located at the confluence of Hugh and Haldia.
(ii) Haldia port was developed to release congestion at the Kolkata port and to enable docking of larger vessels which cannot enter Kolkata port.

(b) The micro regions are the smallest of all planning regions and have the potential for development of at least one specialisation of production cycle of great significance. Example: agriculture in Punjab, tourism in Jammu and Kashmir.

(c) Mahanadi, Godavari and Indrawati. The predominant crop is rice.

(d) The development of a region is required to improve economic, social, political and environmental conditions of the society present in the region. The development helps to increase general productivity level, per capita income, efficiency of a worker, elimination of poverty and improvement in quality of life.