Section – A
Answer all questions.

(v). The energy associated with light of which of the following colours is minimum
(a) violet
(h) red
(c) green
(d) yellow

(B) Answer the following questions briefly and to the point. [7 × 1]
(i) Define equipotential surface.
(ii) Calculate the net emf across A and B shown in Figure 1 below :

(iiii) Why are the pole pieces of a horseshoe magnet in a moving coil galvanometer made cylindrical in shape ?
(iv) What is the value of power factor for a pure resistor connected to an alternating current source ?
(v) What should be the path difference between two waves reaching a point for obtaining constructive interference in Young’s Double Slit experiment.
(vi) Define critical angle for a given medium.
(vii) Name the series in the atomic spectra of the hydrogen atom that falls in the ultraviolet region.
Answer:
(A) (i) (b)
(ii) (c)
(iii) (b)
(iv) (c)
(v)(a)

(B) (i) An equipotential surface is one on the surface of which the potential is same.
(ii) 8V
(iii) This is done to produce a radial magnetic field.
(iv) one.
(v) zero.
(vi) It is defined as the angle of incidence in the denser medium for which the angle of refraction in the rarer medium is 90°.
(vii) Lyman series.

Section – B
Answer all questions.

Question 4. [2]
(a) A electric current I flows through an infinitely long conductor as shown in Figure 2(a) below. Write an expression and direction for the magnetic field at point P.

(b) An electric current I flows through a circular loop as shown in Figure 2(b) below. Write an expression and direction for the magnetic field at the centre of the loop at point P.

Question 5. [2]
A transformer is used to step up an alternating emf of 200 V to 440 V. If the primary coil has 1000 turns, calculate the number of turns in the secondary coil.
Answer:

Question 7. [2]
Write any one use for each of the following mirrors :
(a) Convex
(b) Concave
Answer:
(a) Used as a rear view mirror.
(b) Used as a shaving mirror.

Question 9. [2]
(a) What is meant by mass defect ?
(h) What conclusion is drawn from Rutherford’s scattering experiment of α -particles ?
Answer:
(a) This is the difference in mass of the constituent nucleons and the nucleus formed.
(b) That the entire positive charge and 99 % mass is concentrated in the center of the atom called the nucleus.

Question 11. [2]
(a) The half-life of radium is 1550 years. Calculate its disintegration constant (λ).
Or
(b) Copy and complete the following table for a radioactive element whose half-life is 10 minutes. Assume that you have 30 g of this element at t = 0.

Question 13. . [3]
Obtain an expression for electric potential ‘V’ at a point in an end-on position i.e., axial position of an electric dipole.
Answer:
Consider an electric dipole consisting of -q and +q charges separated by a distance 2a as shown in figure below. Let P be the point of observation where the electric potential has to be found. Let it be at a distance r from the center O of the dipole. Let us suppose that the dipole is placed in vacuum. 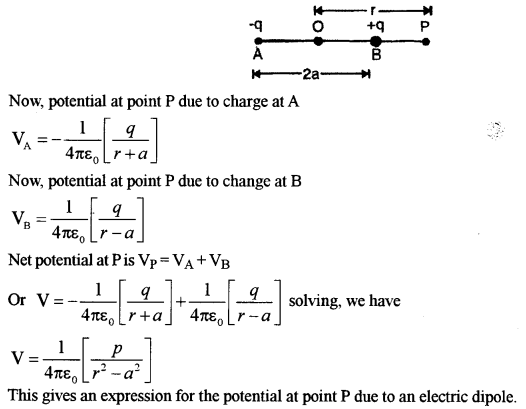 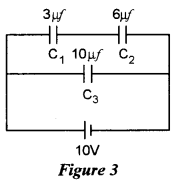 Calculate: .
(a) Equivalent capacitance.
(b) Electrostatic potential energy stored in the system.
Answer:

Question 15. [3]
(a) Obtain the balancing condition for the Wheatstone bridge arrangement as shown in Figure 4 below: 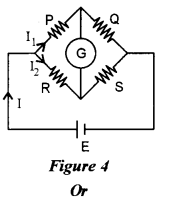 (b) Draw a labelled circuit diagram of a potentiometer to measure the internal resistance ‘r’ of a cell. Write the working formula (derivation is not required).
Answer:
(a) Consider the diagram as shown below. The distribution of current in accordance with Kirchhoff’s rules is shown.
Applying Kirchhoff’s loop rule to the closed loop ABDA, we have
\(-\mathrm{I}_{1} \mathrm{P}-\mathrm{I}_{\mathrm{g}} \mathrm{G}+\left(\mathrm{I}-\mathrm{I}_{1}\right) \mathrm{R}=0 \) …(1) 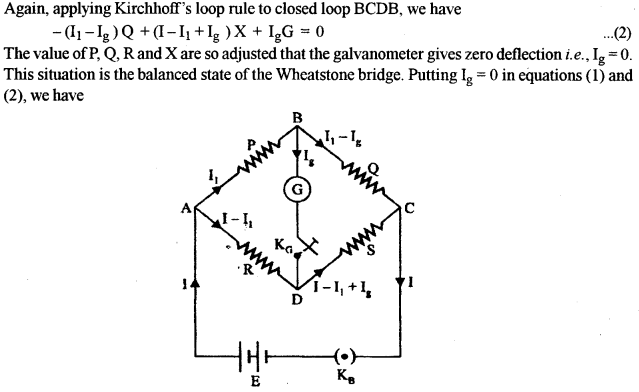 b) The circuit diagram is as shown: 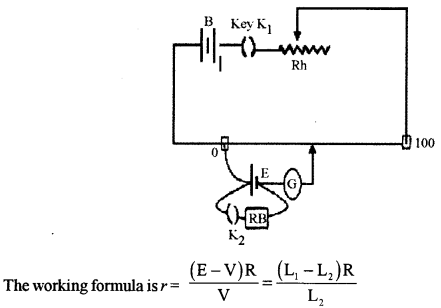 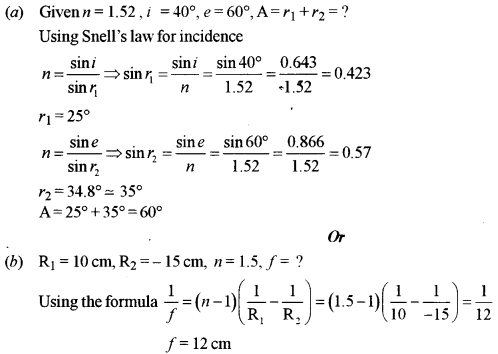 Question 17.  [3]
Derive the law of reflection using Huygens’s Wave Theory.
Answer:
Consider a plane wave front AB incident obliquely on a plane reflecting surface MM’. Let us consider the situation when one end A of wave front strikes the mirror at an angle i but the other end B has still to cover distance BC. Time required for this will be t = BC/ c.

According to Huygens’s principle, point A starts emitting secondary wavelets and in time t, these will cover a distance c,t = BC and spread. Hence, with point A as center and BC as radius, draw a circular arc. Draw tangent CD on this arc from the point C. Obviously. CD is the reflected wave front inclined at an angle r. As incident wave front and reflected wave front both are in the plane of paper, 1st law of reflection is proved.

Question 18. [3]
State any two Bohr’s postulates and write the energy value of the ground state of the hydrogen atom.
Answer:

Question 19. [3]
With reference to semiconductors answer the following :
(i) What is the change in the resistance of the semiconductor with increase in temperature ?
(ii) Name the majority charge carriers in n-type semiconductor.
(iii) What is meant by doping ?
Answer:
(i) It decreases.
(ii) Electrons.
(iii) It is the addition of an impurity in a pure semiconductor. 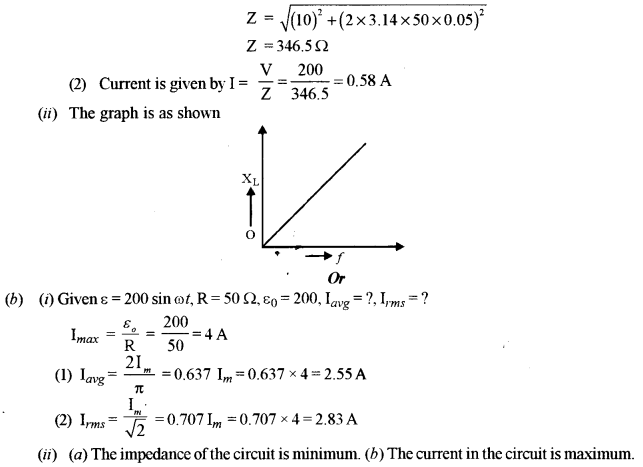 Question 21. [5]
(a) Draw a neat labelled ray diagram showing the formation of an image at the least distance of distinct vision D by a simple microscope. When the final image is at D. derive an expression for its magnifying power at D.
(b) Draw a neat labelled diagram of Young’s Double Slit experiment. Show that β =λD/d , where the terms have their usual meaning (either for bright or dark fringe).
Answer:
(a) The diagram is as shown: 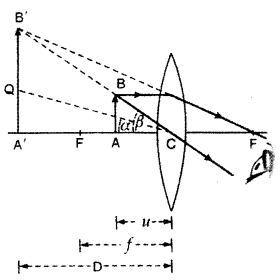 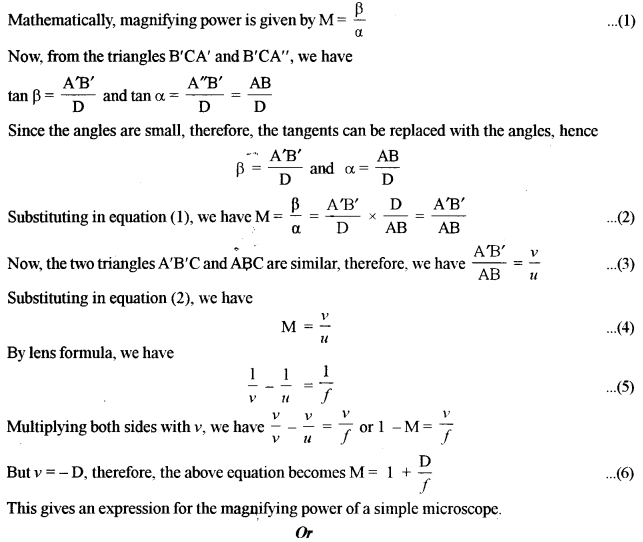 (b) Consider a point P on the viewing screen; the screen is located at a perpendicular distance D from the screen containing the slits S1 and S2, which are separated by a distance das shown in figure. Let us assume that the source of light is monochromatic having a wavelength λ. Under these conditions, the waves emerging from S1 and S2 have the same frequency and amplitude and are in phase. 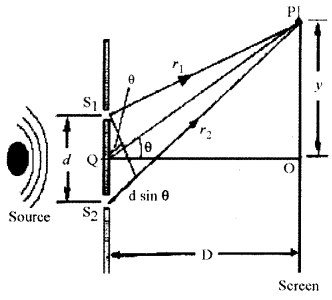 where it is assumed that r1 and r2 are parallel, which is approximately true because D is much greater than d. The value of this path difference determines whether or not the two waves are in phase, when they arrive at point P.

In order to find the position of maxima measured vertically from O to P i.e., y we assume that D >> d. Under these conditions, θ is small, and so the approximation sin θ ~ tan θ. Therefore, from triangle POQ in figure, we find that 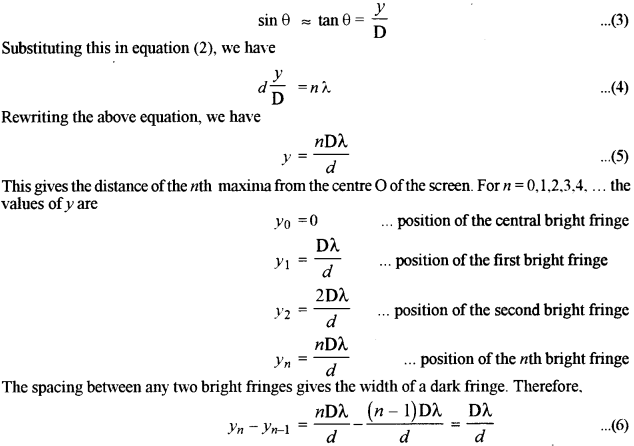 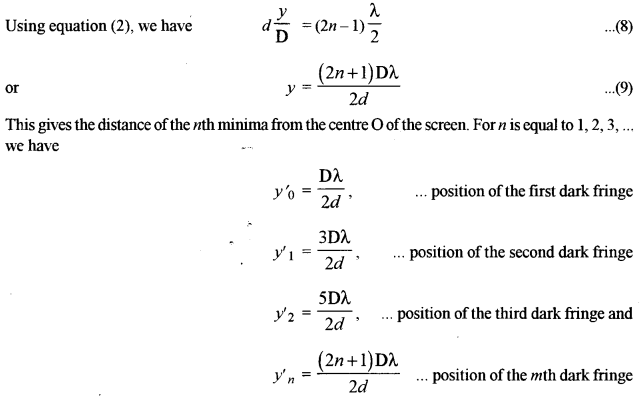 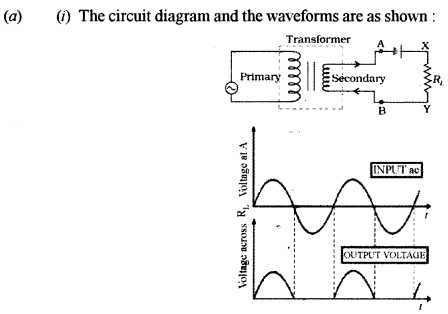 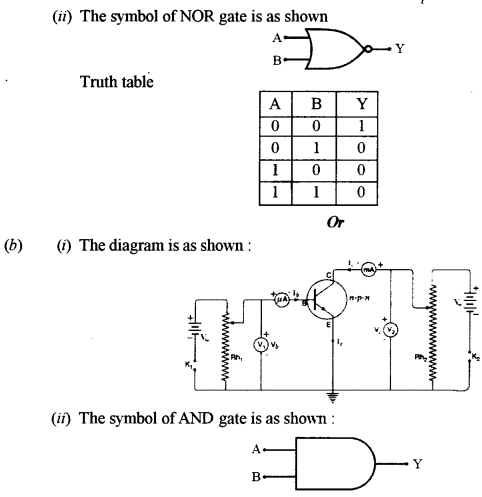