Question 1.
A. Choose the correct alternative (a), (b), (c) or (d) for each of the questions given below : [5]
(i) In figure below, a charge Q is fixed. Another charge q is moved along a circular arc MN of radius r around it, from the point M to the point N such that the length of the arc MN = l. The work done in this process is 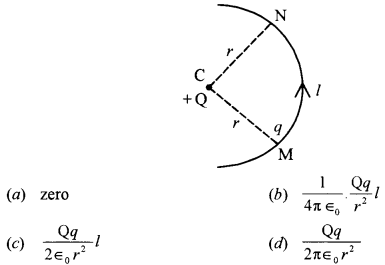 (ii) A carbon resistor has coloured bands as shown in figure below. The resistance of the resistor is :

(iii) A solenoid L and a resistor R are connected in series to a battery, through a switch. When the switch is put on, current I flowing through it varies with time t as shown in which of the graphs given below :

B. Answer all questions given below briefly and to the point:
(i) A charged oil drop weighing 1.6 × 10-15 N is found to remain suspended in a uniform electric field of intensity 2 × 103 NC-1 . Find the charge on the drop.
(ii) For a metallic conductor, what is the relation between current density (J), conductivity (σ) and electric field intensity E ?
(iii) In figure given below, find the value of resistance X for which points A and B are at the same potential: 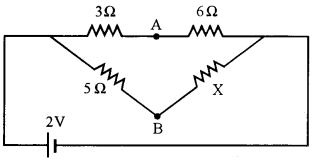 (iv) Write the expression for the Lorentz force F in vector form.
(v) A coil has a self-inductance of 0.05 Henry. Find magnitude of the emf induced in it when the current flowing through it is changing at the rate 100 As-1 .
(vi) To which regions of the electromagnetic spectrum do the following wavelengths belong:
(a) 250 nm
(b) 1500 nm
(vii) What is the difference between polarised light and unpolarised light ?
(viii) Name the principle on the basis of which optical fibres work.
(ix) Calculate dispersive power of a transparent material given : nv = 1.56, nr = 1.54, ny = 1.55.
(x) What is meant by short-sightedness ?
(xi) Two metals A and B have work functions 4 eV and 6 eV respectively. Which metal has lower threshold wavelength for photoelectric effect ?
(xii) Calculate angular momentum of an electron in the third Bohr orbit of hydrogen atom,
(xiii) In a nuclear reactor, what is the function of a moderator ?
(xiv) In our Nature, where is the nuclear fusion reaction taking place continuously ?
(xv) What is the use of a Zener diode ?
Answer:
A. (i) a
(ii) c
(iii) b
(iv) d
(v) c 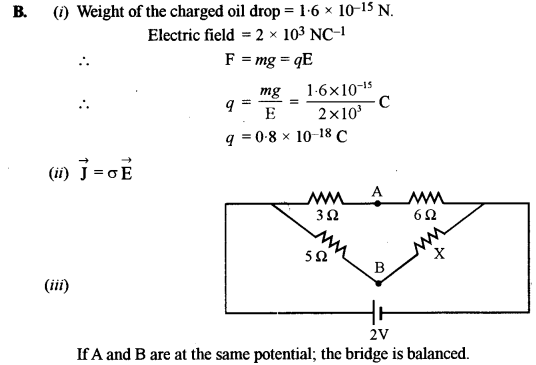 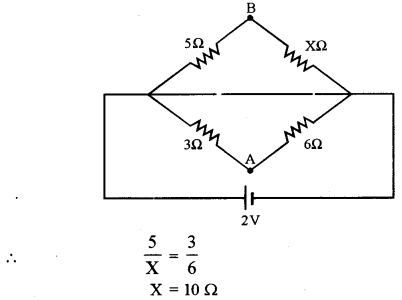 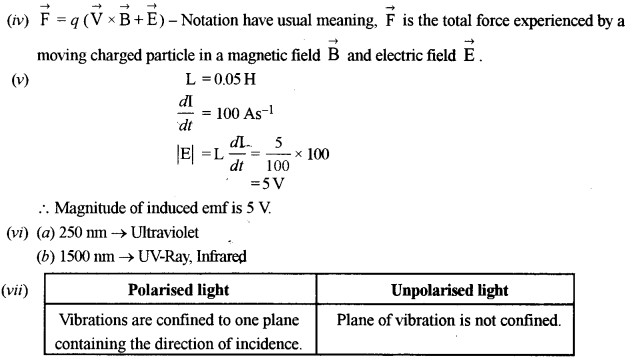 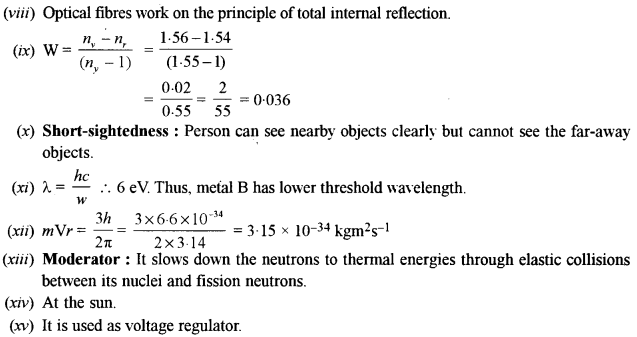 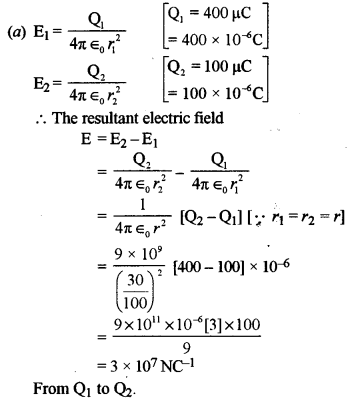 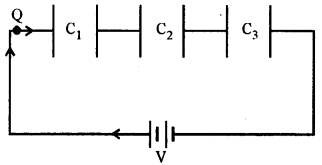 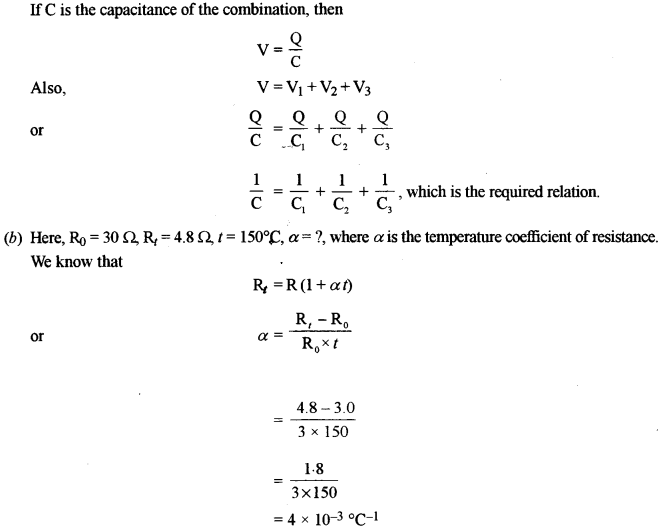 Question 4.
(a) In the circuit shown in figure below, E1 and E2 are two cells having emfs 2 V and 3 V respectively, and negligible internal resistances. Applying Kirchhoff’s laws of electrical networks, find the values of currents l1 and I2. 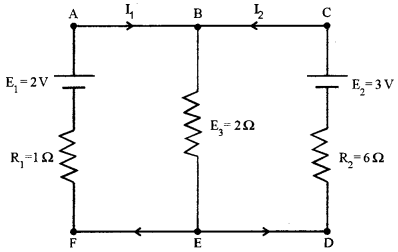 (b) State how a moving coil galvanometer can be converted into an ammeter
Answer:
(a) The distribution of current in the circuit is as shown in figure 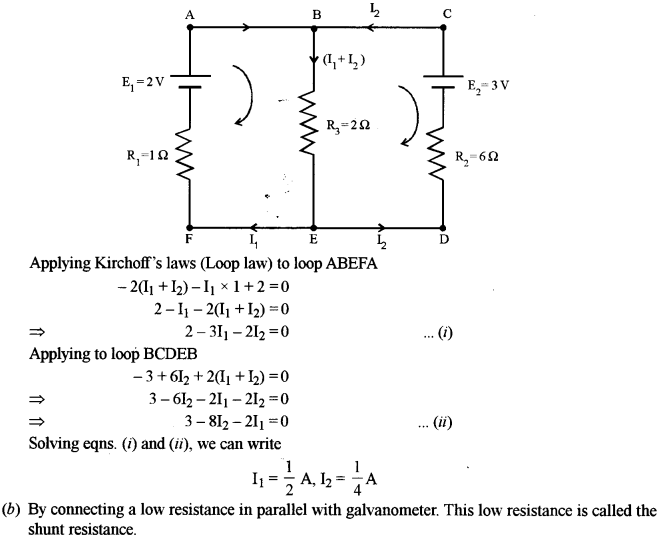 Question 5.
(a) Draw a labelled circuit diagram of a potentiometer to measure internal resistance of a cell. Write the working formula. (Derivation not required). [3]
(b) (i) Define Curie temperature. [2]
(ii) If magnetic susceptibility of a certain magnetic material is 0 0001, find its relative permeability.
Answer: 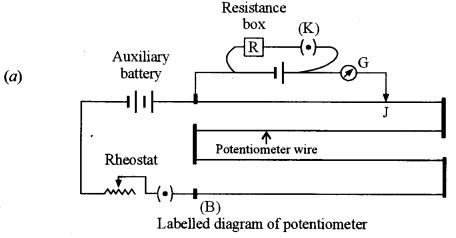 (b) (i) Curie temperature : The temperature above which a ferromagnetic substance becomes paramagnetic is called curie temperature.
(ii) The relation between magnetic susceptibility and relative permeability is μr = 1 + Xm Therefore, μr = 1 + 0.0001 = 1.0001
[∴ Xm = 0.0001]

Question 6.
(a) (i) Two infinitely long current carrying conductors X and Y are kept parallel to each other, 24 cm apart in vacuum. They carry currents of 5A and 7A respectively, in the same direction, as shown in figure below. Find the position of a neutral point, i.e., a point where resultant magnetic flux density is zero. (Ignore earth’s magnetic field). [3]

(ii) If current through the conductor Y is reversed in direction, will neutral point lie between X and Y, to the left of X or to the right of Y ?
(b) (i) Define Ampere in terms of force between two current carrying conductors. [2]
(ii) What is an ideal transformer ?
Answer: 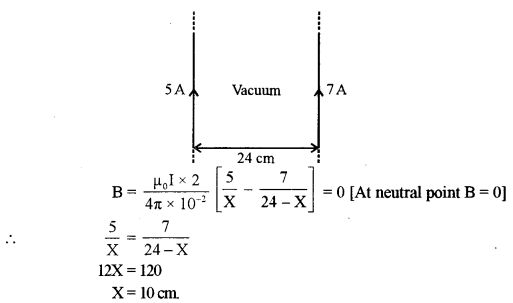 ∴ The position of null point will be at 10 cm from ‘X’ wire.
(ii) The null point will be left of X, when the direction of current in Y is reversed.
(b) (i) An ampere is that much current which when flowing through each of the two infinitely long straight conductor placed in vacuum 1 metre apart results in a force of 2 × 10-7 Nm-1 on each of the conductors.
(ii) Ideal transformer: Input energy of the transformer is equal to the output energy. 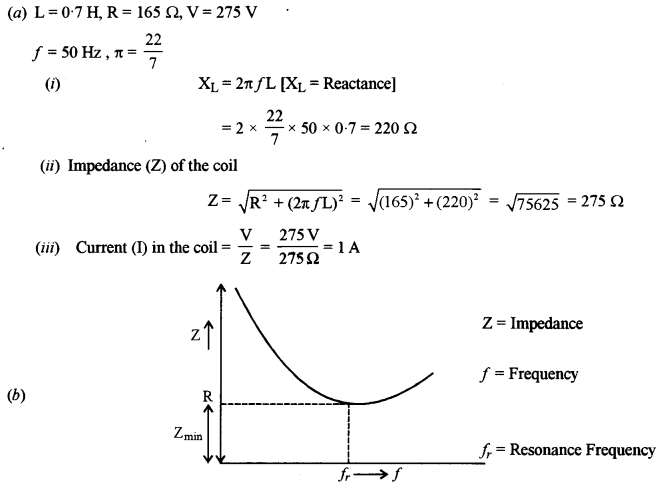 Question 8.
(a) Derive Snell’s law of refraction using Huygens’s wave theory. [3]
(b) Monochromatic light of wavelength 650 nm falls normally on a slit of width 1.3 x 10-4 cm and the resulting Fraunhofer diffraction is obtained on a screen. Find the angular width of the . central maxima. [2]
Answer: 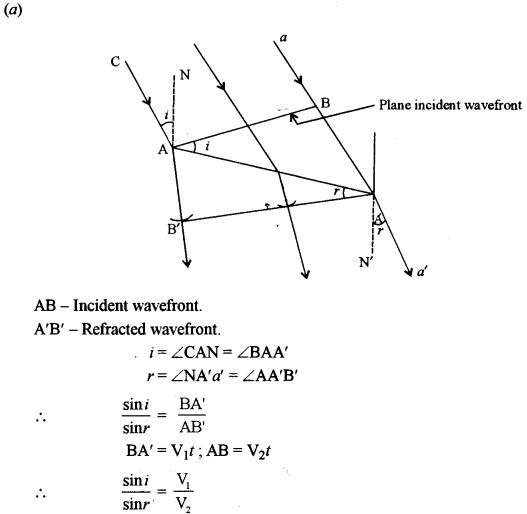 Question 9.
(a) In Young’s double slit experiment, show that: [4]
\(\beta=\frac{\lambda \mathrm{D}}{d}\)
where the terms have their usual meaning.
(b) A ray of ordinary light is travelling in air. It is incident on air glass pair at a polarising angle of 56°. Find the angle of refraction in glass. [1]
Answer: 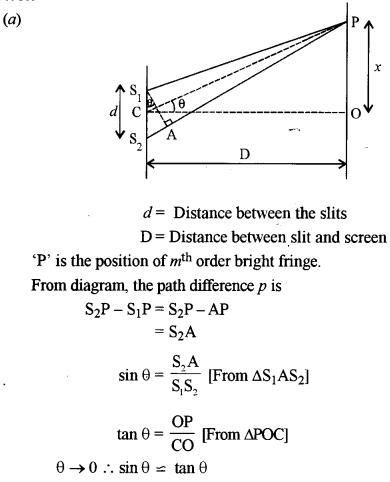 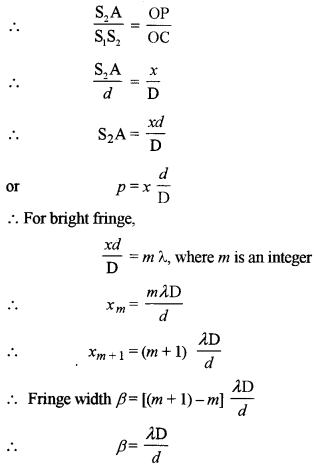 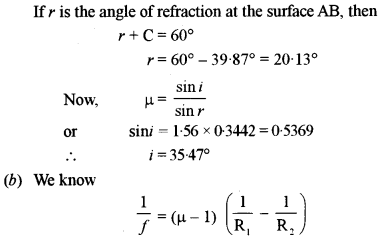 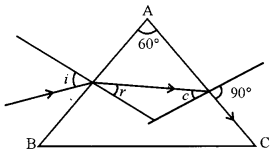 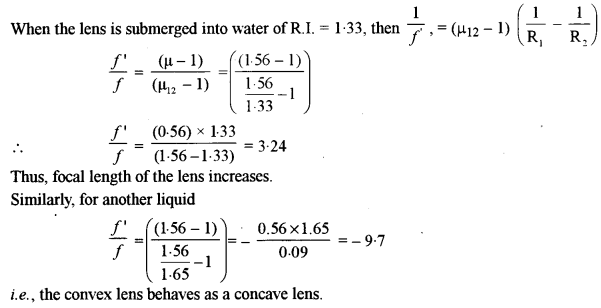 Question 11.
(a) A convex lens of a focal length 5 cm is used as a simple microscope. Where should an object be placed so that the image formed by it lies at the least distance of distinct vision (D = 25 cm)? [2]
(b) Draw a labelled ray diagram showing the formation of an image by a refracting telescope when the final image lies at infinity. [3 ]
Answer: 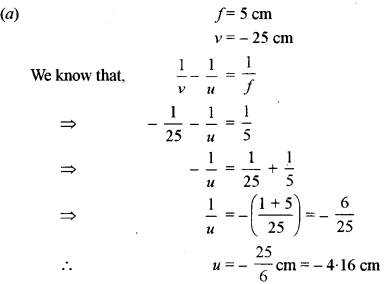 (b) Diagram for a refracting telescope for final image at infinity.

Question 12.
(a) Monochromatic fight of wavelength 198 nm is incident on the surface of a metallic cathode whose work function is 2.5 eV How much potential difference must be applied between the cathode and the anode of a photocell to just stop the photo current from flowing ? [3 ]
(b) (i) What is de Broglie hypothesis ? [2]
(ii) What conclusion can be drawn from Davisson and Germer’s experiment ?
Answer:

Question 13.
(a) (i) How are various lines of Lyman series formed? Explain on the basis of Bohr’s theory. [3]
(ii) Calculate the shortest wavelength of electromagnetic radiation present in Balmer series of hydrogen spectrum.
(b) State the effect of the following changes on the X-rays emitted by Coolidge X-ray tube : [2]
(i) High voltage between cathode and anode is increased.
(ii) Filament temperature is increased.
Answer:

If V increases wavelength λ will decrease i.e., harder X-rays will be produced.
(ii) When the temperature increases, the number of electrons emitted by the filament increases. As a result, the intensity of X-rays increases.

Question 14.
(a) Half life of a certain radioactive material is 8 hours. [3]
(i) Find disintegration constant of this material.
(ii) If one starts with 600 g of this substance, how much of it will disintegrate in one day ?
(b) Sketch a graph showing the variation of binding energy per nucleon of a nucleus with its mass number. [2]
Answer: 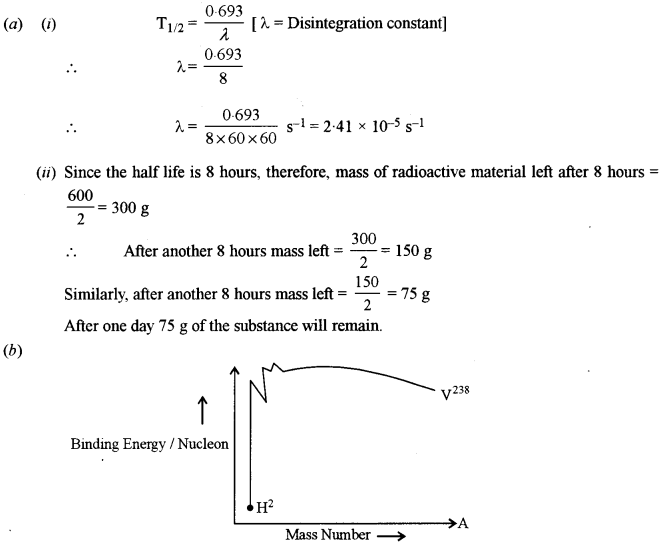 Question 15.
(a) Draw a circuit diagram for the common emitter transistor amplifier. What is meant by phase reversal ? [3]
(b) Write the truth table of the following circuit. Name the gate represented by this circuit. [2] 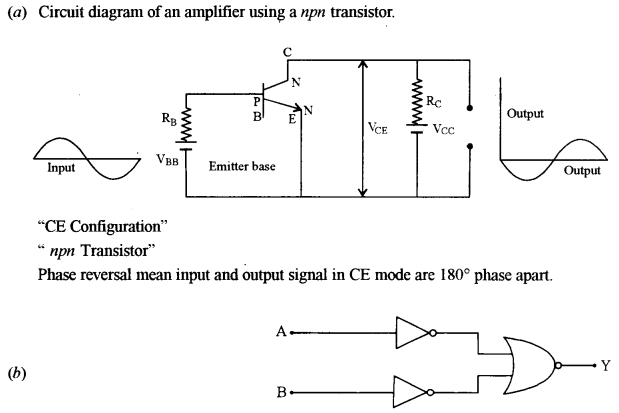 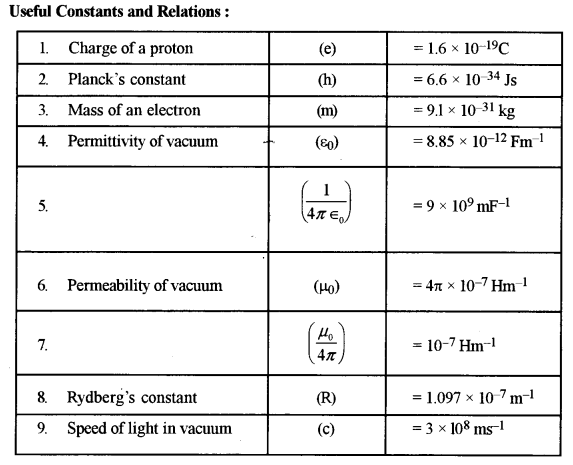