Part – I
Answer all questions

While answering questions in this Part, indicate briefly your working and reasoning, wherever required. 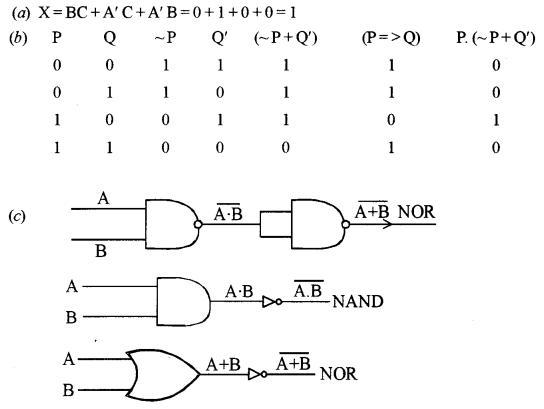 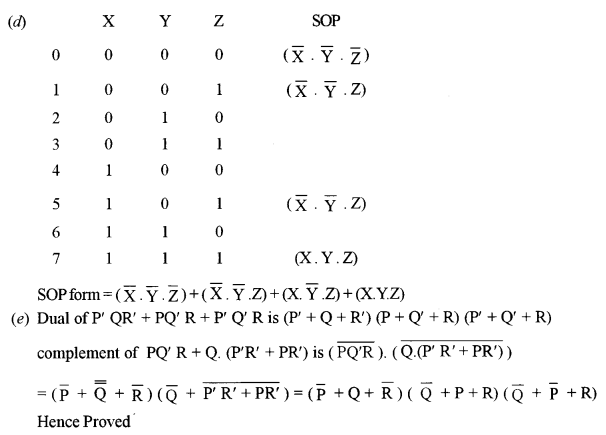 (d) Exception: It refers to some contradictory or unusal situation which can be encountered while executing a program.
(i) IO Exception
(ii) Array out of Bound Exception

Question 3.
(a) The following functions numbers (int) and numbers1 (int) are a part of some class. Answer the questions given below showing the dry run/working:

Section – A
Answer any three questions 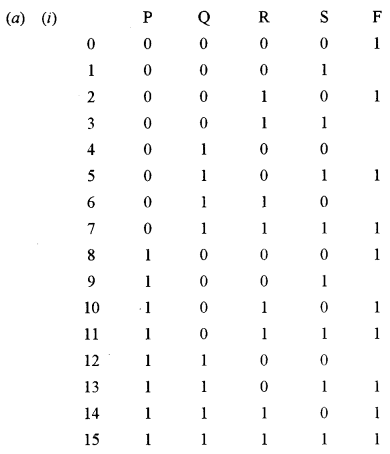 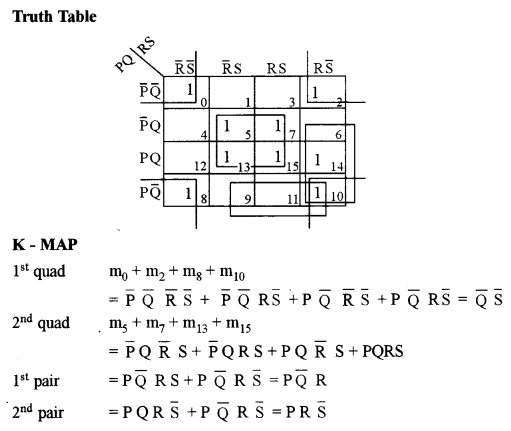 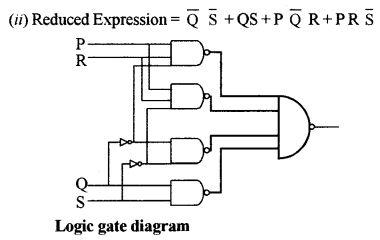 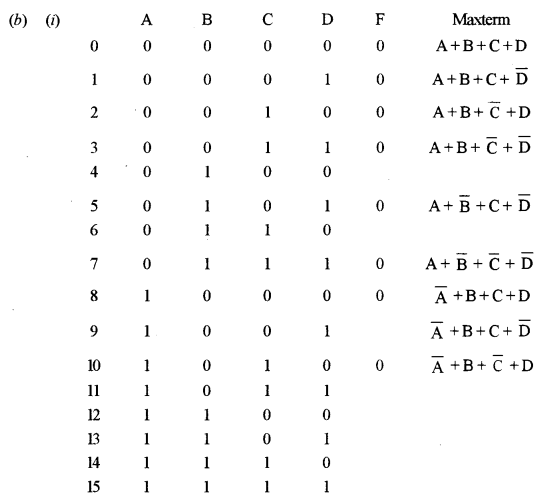 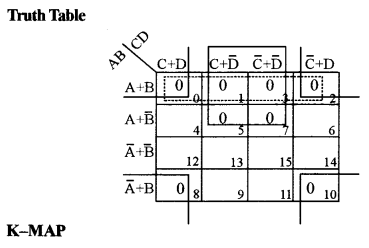 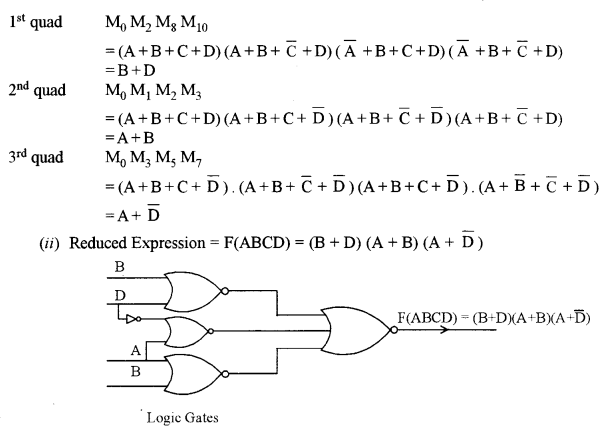 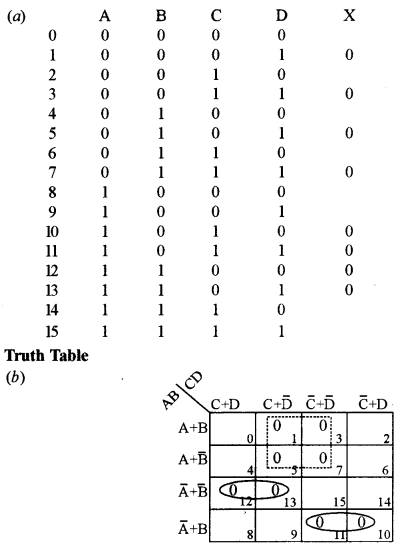 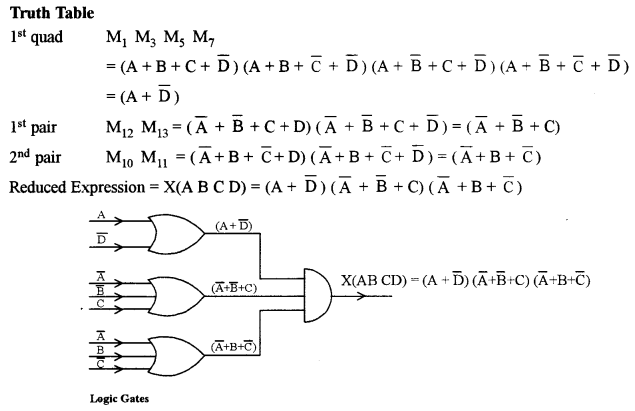 It is neither Tautology nor contradiction.

(c) Multiplexer: It is a combinational circuit that selects binary information from one of many input lines and directs it to a single output line. 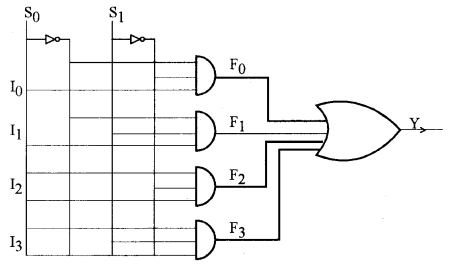 Question 7.
(a) Draw the circuit diagram for a 3 to 8 Decoder. [3]
(b) Draw the truth table for a Half Adder. Also, derive a POS expression for the Half Adder and draw its logic circuit. [3]
(c) Simplify the following expression and also draw the circuit/gate for the reduced expression.
[Show the stepwise working along with the laws used.] [4]
F = X.(Y + Z.(X.Y + X.Z)’)
Answer: 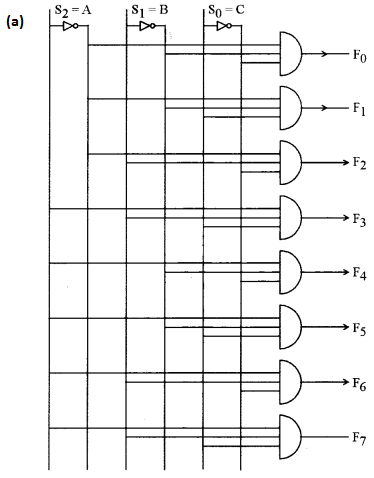 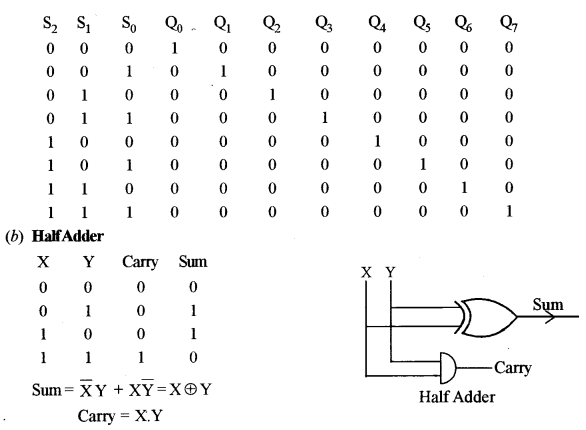 Section – B
Answer any two questions

Question 8.
The coordinates of a point P on a two-dimensional plane can be represented by P(x, y) with x as the x-coordinate and y as the y-coordinate. The coordinates of the midpoint of two points P1(x1, y1) and P2(x2, y2) can be calculated as P(x, y) where: [10]
\(x=\frac{x_{1}+x_{2}}{2}, y=\frac{y_{1}+y_{2}}{2}\)
Design a class Point with the following details:
Class name: Point
Data Members/instance variables:
x: stores the x-coordinate
y: stores the y-coordinate
Member functions:
Point (): constructor to initialize x = 0, y = 0
void readpoint (): accepts the coordinates x and y of a point
Point midpoint (Point A, Point B): calculates and returns the midpoint of the two points A and B
void displaypoint (): displays the coordinates of a point
Specify the class Point giving details of the constructor (), member functions void readpoint ( ), Point midpoint (Point, Point) and void displaypoint () along with the main () function to create an object and call the functions accordingly to calculate the midpoint between any two given points.
Answer:

Question 9.
Input a word in uppercase and check for the position of the first occurring vowel and perform the following operation. [10]
(i) Words that begin with a vowel are concatenated with “Y”.
For example, EUROPE becomes EUROPEY.
(ii) Words that contain a vowel in-between should have the first part from the position of the vowel till the end, followed by the part of the string from beginning till the position of the vowel and is concatenated by “C”.
For example, PROJECT becomes OJECTPRC.
(iii) Words which do not contain a vowel are concatenated with “N”.
For example, SKY becomes SKYN.
Design a class Rearrange using the description of the data members and member functions given below:
Class name: Rearrange
Data Members/instance variables:
Txt: to store a word
Cxt: to store the rearranged word
len: to store the length of the word
Member functions:
Rearrange (): constructor to initialize the instance variables
void readword (): to accept the word input in UPPER CASE
void convert (): converts the word into its changed form and stores it in string Cxt
void display(): displays the original and the changed word
Specify the class Rearrange giving the details of the constructor (), void readword ( ), void convert () and void display (). Define a main () function to create an object and call the function accordingly to enable the task.
Answer:

Question 10.
Design a class Change to perform string related operations. The details of the class are given below:
Class name: Change
Data Members/instance variables:
str: stores the word
newstr: stores the changed word
len: store the length of the word
Member functions:
Change(): default constructor
void inputword( ): to accept a word
char caseconvert (char ch): converts the case of the character and returns it
void recchange (int): extracts characters using recursive technique and changes its case using caseconvert () and forms a new word
void display (): displays both the words
(a) Specify the class Change, giving details of the Constructor ( ), member functions void inputword (), char caseconvert (char ch), void recchange (int) and void display (). Define the main () function to create an object and call the functions accordingly to enable the above change in the given word. [8]
(b) Differentiate between an infinite and a finite recursion. [2]
Answer:

Question 11.
A superclass Worker has been defined to store the details of a worker. Define a subclass Wages to compute the monthly wages for the worker. The details/specifications of both the classes are given below:
Class name: Worker
Data Members/instance variables:
Name: to store the name of the worker
Basic: to store the basic pay in decimals
Member functions:
Worker (…): Parameterised constructor to assign values to the instance variables
void display (): display the worker’s details
Class name: Wages
Data Members/instance variables:
hrs: stores the hours worked
rate: stores rate per hour
wage: stores the overall wage of the worker
Member functions:
Wages (…): Parameterised constructor to assign values to the instance variables of both the classes
double overtime (): Calculates and returns the overtime amount as (hours*rate)
void display (): Calculates the wage using the formula wage = overtime amount + Basic pay and displays it along with the other details
Specify the class Worker giving details of the constructor () and void display ( ). Using the concept of inheritance, specify the class Wages giving details of constructor ( ), double-overtime () and void display (). The main () function need not be written.
Answer:

Question 12.
Define a class Repeat which allows the user to add elements from one end (rear) and remove elements from the other end (front) only.
The following details of the class Repeat are given below:
Class name: Repeat
Data Members/instance variables:
st[]: an array to hold a maximum of 100 integer elements
cap: stores the capacity of the array
f: to point the index of the front
r: to point the index of the rear
Member functions:
Repeat (int m): constructor to initialize the data members cap = m, f = 0, r = 0 and to create the integer array
void pushvalue (int v): to add integer from the rear index if possible else display the message (“OVERFLOW”)
int popvalue (): to remove and return element from the front. If array is empty then return -9999
void disp (): Displays the elements present in the list
(a) Specify the class Repeat giving details of the constructor (int), member function void pushvalue (int). int popvalue () and void disp (). The main ( ) function need not be written. [8]
(b) What is the common name of the entity described above? [1]
(c) On what principle does this entity work? [1]
Answer:

(b) Queue
(c) It works on first in first out Principle(FIFO).

Write a method OR an algorithm to compute and return the sum of all integers items stored in the linked list. The method declaration is specified below:
int listsum(ListNodes start);
(b) What is Big ‘O’ notation? State its significance. [2]
(c) Answer the following from the diagram of a Binary Tree given below: