Question 1.
(a) Fill in the blanks by choosing the appropriate word/words from those given in the brackets: [5]
(iodoform, acetaldehyde, positive, greater, acidic, acetone, disaccharide, negative, increases, glucose, decreases, chloroform, polysaccharide, lactose, lesser, basic, cationic hydrolysis, anionic hydrolysis)
(i) Calcium acetate on heating gives ………. which gives ……… on heating with iodine and sodium hydroxide solution.
(ii) On dilution of a solution, its specific conductance ……….. while its equivalent conductance ……….
(iii) Sucrose is a ………… and yields upon hydrolysis, a mixture of ………. and fructose.
(iv) More ………. the standard reduction potential of a substance, the ……… is its ability to displace hydrogen from acids.
(v) An aqueous solution of CH3COONa is ………. due to …………

(b) Complete the following statements by selecting the correct alternative from the choices given: [5]
(i) In a face-centred cubic lattice, atom (A) occupies the comer positions and atom (B) occupies the face centre positions. If one atom of (B) is missing from one of the face-centred points, the formula of the compound is:
(1) A2B5
(2) A2B3
(3) AB2
(4) A2B

(v) The polymer formed by the condensation of hexamethylenediamine and adipic acid is:
(1) Teflon
(2) Bakelite
(3) Dacron
(4) Nylon-66

(c) Answer the following questions: [5]
(i) Why the freezing point depression (ΔTf) of 0.4 M NaCl solution is nearly twice than that of 0.4 M glucose solution?
(ii) Identify the order of reaction from each of the following units of rate constant (k):
(a) mol L-1 sec-1
(b) mol-1 L sec-1
(iii) Specific conductivity of 0.20 M solution of KCl at 298 K is 0.025 S cm-1. Calculate its molar conductivity.
(iv) Name the order of reaction which proceeds with a uniform rate throughout.
(v) What are the products formed when phenol and nitrobenzene are treated separately with a mixture of concentrated sulphuric acid and concentrated nitric acid?
(d) Match the following: [5]

Section – A
Answer any two questions. 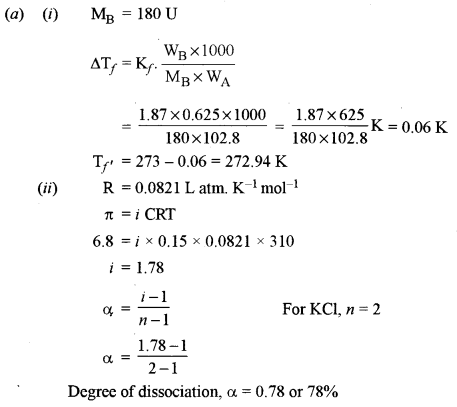 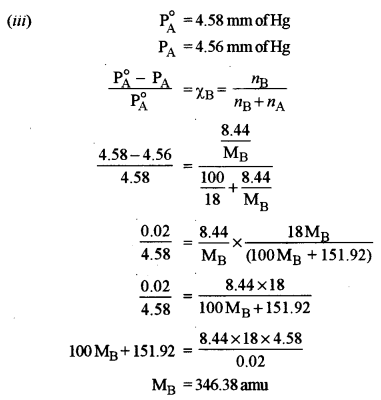 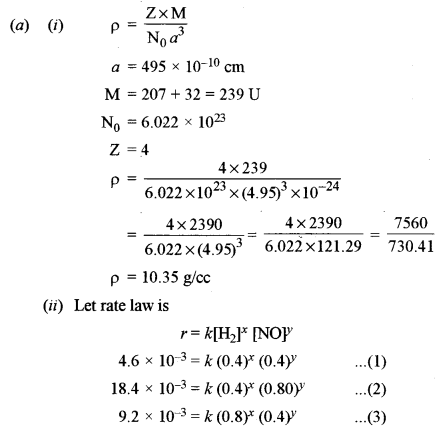 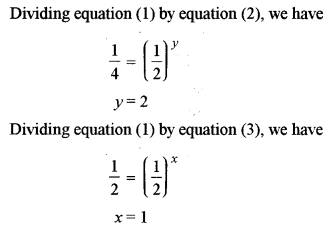 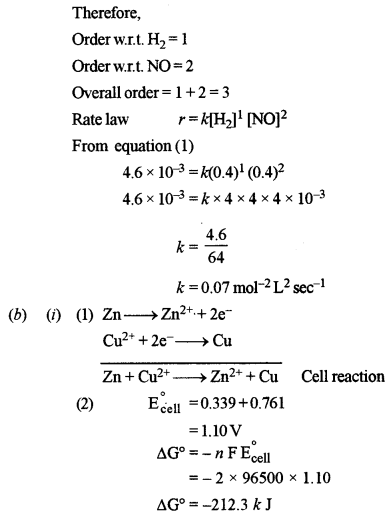 This is because the forward reaction is accompanied by a decrease in volume.
The principle used is i.e., Chatelier’s principle.
It states that when a system in equilibrium is subjected to stress, (i.e., change of concentration, temperature pressure etc.), the equilibrium tends to shift in a direction so as to undergo the effect of applied stress.

(c) (i) This is because of H+ ions produced during hydrolysis act as a catalyst.
(ii) This is due to the common ion effect. As a result of (H+) decreases.

Section – B
Answer any two questions.

Question 6.
(a) Give balanced equations for the following reactions: [3]
(i) Potassium permanganate is heated with concentrated hydrochloric acid.
(ii) Lead sulphide is heated with hydrogen peroxide.
(iii) Ozone is treated with potassium iodide solution.
(b) Discuss the theory involved in the manufacture of sulphuric acid by the contact process. [2]
Answers:

Question 7.
(a) (i) What are the types of hybridisation of iodine in interhalogen compounds IF3, IF5 and IF7, respectively? [3]
(ii) Draw the structure of xenon hexafluoride (XeF6) molecule and state the hybridisation of the central atom.
(b) Give the balanced equations for the conversion of argentite (Ag2S) to metallic silver. [2]
Answers: 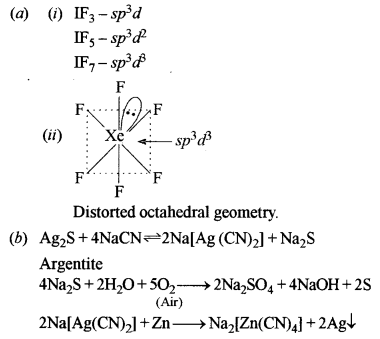 Question 8.
(a) How can the following conversions be brought about:
(i) Acetaldehyde to propan-2-ol. [1]
(ii) Nitrobenzene to p-aminoazobenzene. [1]
(iii) Acetic acid to methylamine. [2]
(iv) Aniline to benzene. [1]
(b) (i) How will you distinguish between primary, secondary and tertiary amines by Hinsberg’s test? [1]
(ii) Why do alcohols possess higher boiling points as compared to those of corresponding alkanes? [1]
(c) Identify the compounds A, B and C: [3] 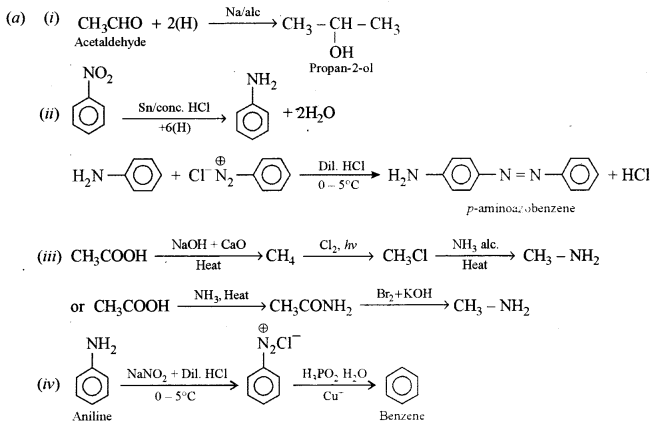 (b) (i) With Hinsberg’s reagent:
Primary amines give N-alkyl benzene sulphonamide soluble in alkali.
Secondary amines give N, N-dialkyl benzene sulphonamide insoluble in alkali.
Tertiary amines have no action with Hinsberg’s reagent.
(ii) This is because in alcohols there are intermolecular H-bonds which are stronger than Van der Waals forces of attraction in alkanes. 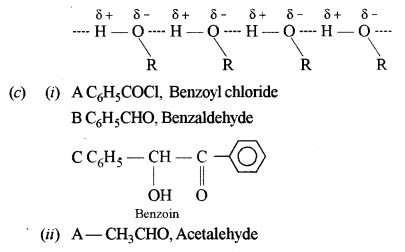 Question 10.
(a) An aliphatic unsaturated hydrocarbon (A) when treated with HgSO4/H2SO4 yields a compound (B) having molecular formula C3H6O. (B) on oxidation with concentrated HNO3 gives two compounds (C) and (D). Compound (C), when treated with PCl5, gives compound (E). (E) when reacts with ethanol gives a sweet-smelling liquid (F). Compound (F) is also formed when (C) reacts with ethanol in the presence of concentrated H2SO4. [4]
(i) Identify the compounds A, B, C, D, E and F.
(ii) Give the chemical equation for the reaction of (C) with chlorine in the presence of red phosphorus and name the reaction.
(b) Answer the following: [3]
(i) What is the common name of the polymer obtained by the polymerisation of caprolactam? Is it addition polymer or condensation polymer?
(a) Name the two organic compounds which have the same molecular formula C2H6O. Will they react with PCl5? If they react, what are the products formed?
(c) Give balanced equations for the following reactions: [3]
(i) Methyl magnesium bromide with ethyl alcohol.
(ii) Acetic anhydride with phosphorus pentachloride.
(iii) Acetaldehyde with hydroxylamine.
Answer:
(a) (i) \(\mathrm{A}-\mathrm{CH}_{3}-\mathrm{C} \equiv \mathrm{CH}, \text { propyne }\)
B – CH3COCH3, Acetone
C – CH3COOH, Acetic acid
D – HCOOH, Formic acid (or CO2 + H2O)
E – CH3COCl, Acetyl chloride
F – CH3COOC2H5, Ethyl acetate 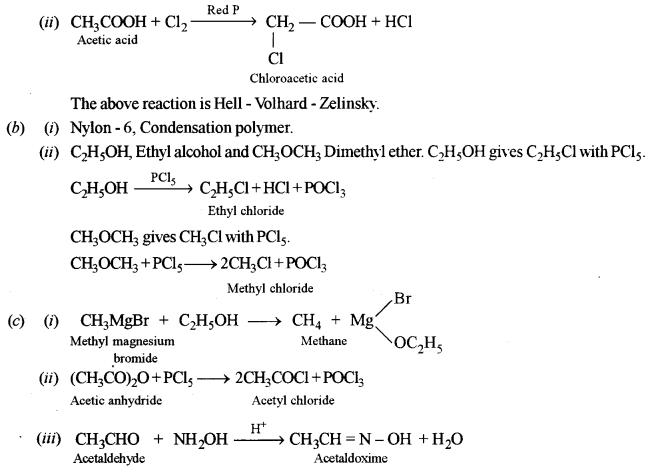